Ghost of Tsushima has been out for almost two weeks. Maybe you’ve already finished it. Maybe you’re creeping up on the end and want to know what you’re in for. Maybe you love the game so much you don’t want it to end and instead want to read vicariously about the finale. Let’s talk.

Seriously, we’re warning you. Don’t scroll past the game’s most irritating character unless you want the ending ruined! 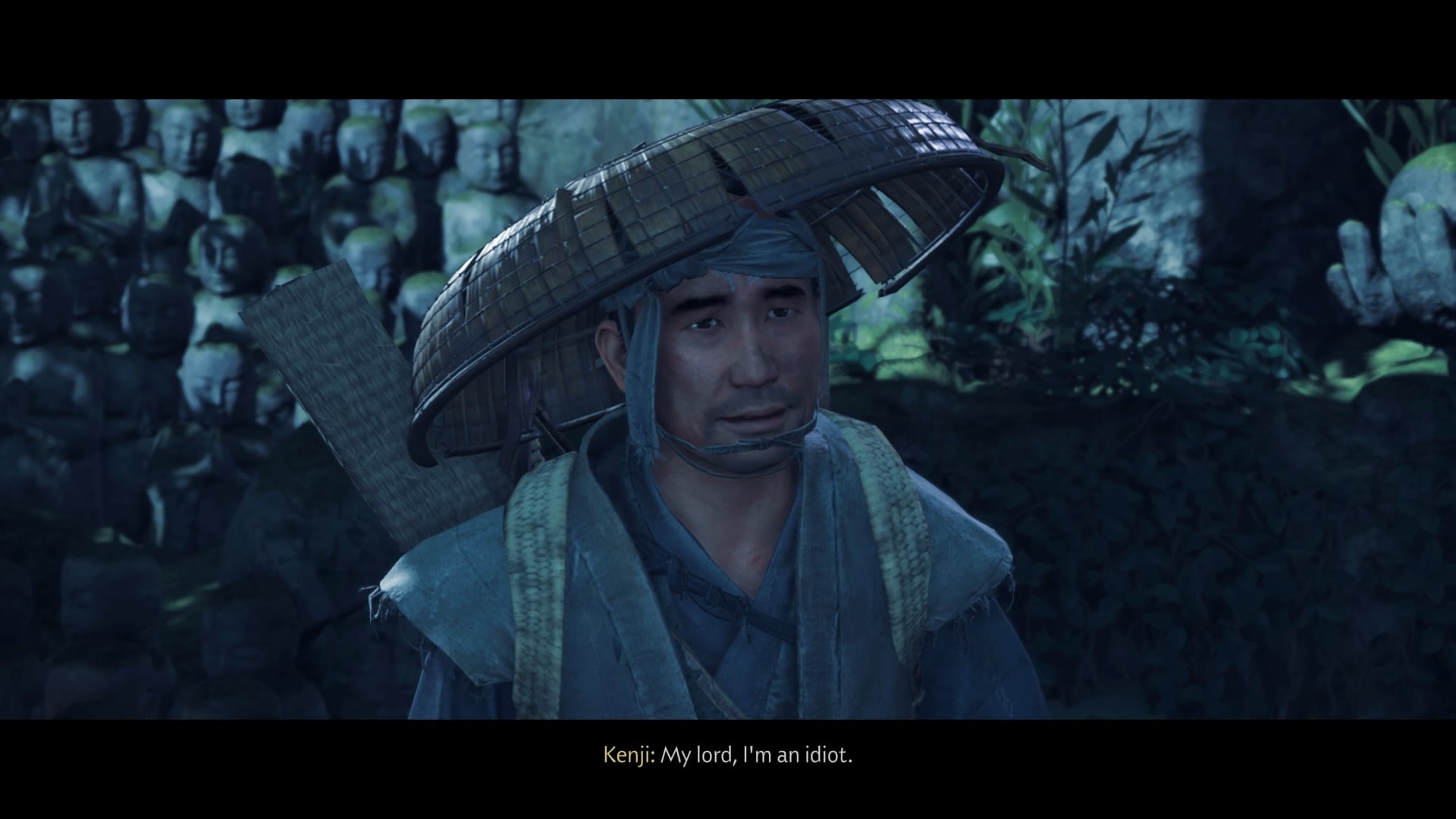 Truer words have never been spoken.

Ghost of Tsushima starts off with a Mongol warlord, Khotun Khan, decapitating one samurai lord, capturing another, and ordering an invading army to purge the rest. It’s only natural that you fight him at the end.

Unlike many of the game’s duels, this one’s not a fair fight. Go figure. After you defeat Khotun Khan in open combat – an honourable match that’d surely make Lord Shimura proud – he inelegantly bows out, still alive, and orders a small army of Mongol troops to swarm you. (Keep in mind, this is after you fight your way through the Khan’s stronghold at Izumi Village, killing dozens of soldiers at every turn.) So you have to duel this spear-wielding mammoth of a man while high-level foot soldiers distract you with unblockable attacks and high-level archers shoot flaming arrows at you from the rafters.

It’s easily the most action-packed segment of the game. Ghost of Tsushima largely consists of stealth sequences or small-scale melees in which, at most, you might have to fend off a dozen people at once. During the battle in Izumi Village, you rack up a kill count that would dethrone John Wick. After you land several combos on the Khan – again, while fending off a small armada of Mongols – he’ll go down for good. (Free advice: Ghost stance is particularly helpful in this sequence.) Whatever you think of the set piece, it’s a fitting, cathartic end to a character who’s, to put it lightly, kind of a dick. 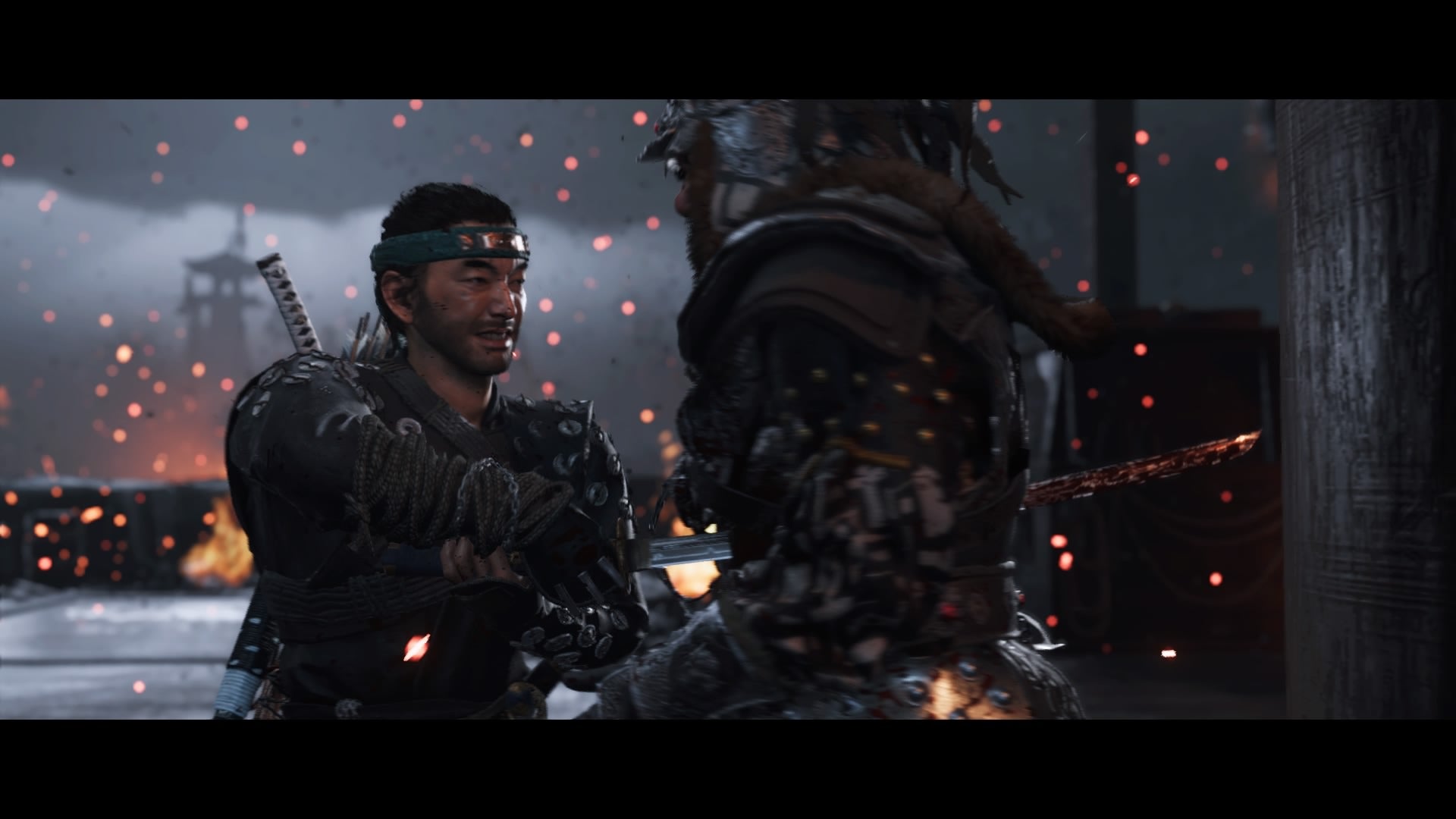 He’s not getting up from that.

But the game doesn’t end after you kill the Khan. At the end of the game, this structure takes a left turn. It’s such a sharp turn, in fact, that we’re going to slap on another spoiler warning.

One day, I’ll get bored of this image. That day is not today.

Don’t say we didn’t warn you!

For the most part, Ghost of Tsushima isn’t a game of choice the way a Bioware or Bethesda role-playing game is. You might have the occasional dialogue option during some side-quests. When you soak in a hot spring, you’ll have to decide whether or not Jin thinks about food or fate or some other ultimately superficial choice. You of course have full autonomy to play dress-up with Jin all you want. But outside of those skin-deep decisions, Jin is Jin, not you.

This all changes after the Khan is good and dead. You still have one more task to tackle – a main mission called “The Tale of Lord Shimura” – and how you handle it has tangible ramifications for the post-game.

From start to end, Ghost of Tsushima’s narrative hinges on inner turmoil burning inside Jin. He can hold fast to the code of the samurai, looking enemies in the eye when he kills them, or he can continue down the path of “the Ghost,” shirking his principles for more dishonourable, yet more effective, methods of silent assassination. Lord Shimura loudly disdains the latter, something made clear after you rescue him at the end of Act I. (It takes a seriously committed individual to split hairs over how, exactly, they’re rescued.)

At the end of the second act, while storming Shimura castle with Tsushima’s ragtag forces, Jin leans all the way into his Ghost persona to prevent disaster. He dishonourably kills an entire Mongol contingent with poisoned food, rather than allowing honourable, yet futile, open combat. Jin saves the day, but doesn’t evade punishment. Shimura exiles him – a fate that lasts through the entirety of the third act.

After escaping Shimura’s prison (RIP to Nobu, the best horse), Jin then spends the rest of the game preparing to storm the Khan in Izumi Village. After extensive planning, Jin and his motley crew decide to attack without explicitly receiving the backing of Shimura and his resources. Then, during the final assault, Lord Shimura and the mainland samurai army swoop in at the 11th hour. (Video games!)

Still, even though Shimura decides to save the day in a bout of deus ex machina, he’s still pissed off at Jin for those earlier events.

After the post-battle dust has cleared, Jin heads to Omi Lake (the same idyllic clearing you may remember from the tedious opening flashback sequences). There, he plans to meet with Lord Shimura and hash these problems out. Shimura shows up late, clearly not committed to punctuality as much as he is to honour, and informs Jin of his retribution. Straight from the shogun’s office, Jin is to lose his samurai title and his Omi Village estate. Clan Sakai is to be formally disbanded. And, oh yeah, Jin’s slapped with a death warrant.

Shimura, for his part, sticks to his guns (or, rather, his swords). True to his lifelong commitment to that code, he opts to duel Jin, rather than outright execute him. Once you win the fight – by this point, you’re so jacked it’s a piece of cake – you’re presented with two options: Strike Shimura down on the spot, per his wishes, or leave him alive, ensuring he’ll chase Jin for the rest of his days.

It’s the only time the narrative is put in your hands, and what you choose doesn’t just affect the plot. Far more importantly, it also affects your wardrobe. If you grant Shimura an honourable death, you’ll get the totally righteous Righteous Punishment dye for your Ghost Armour: 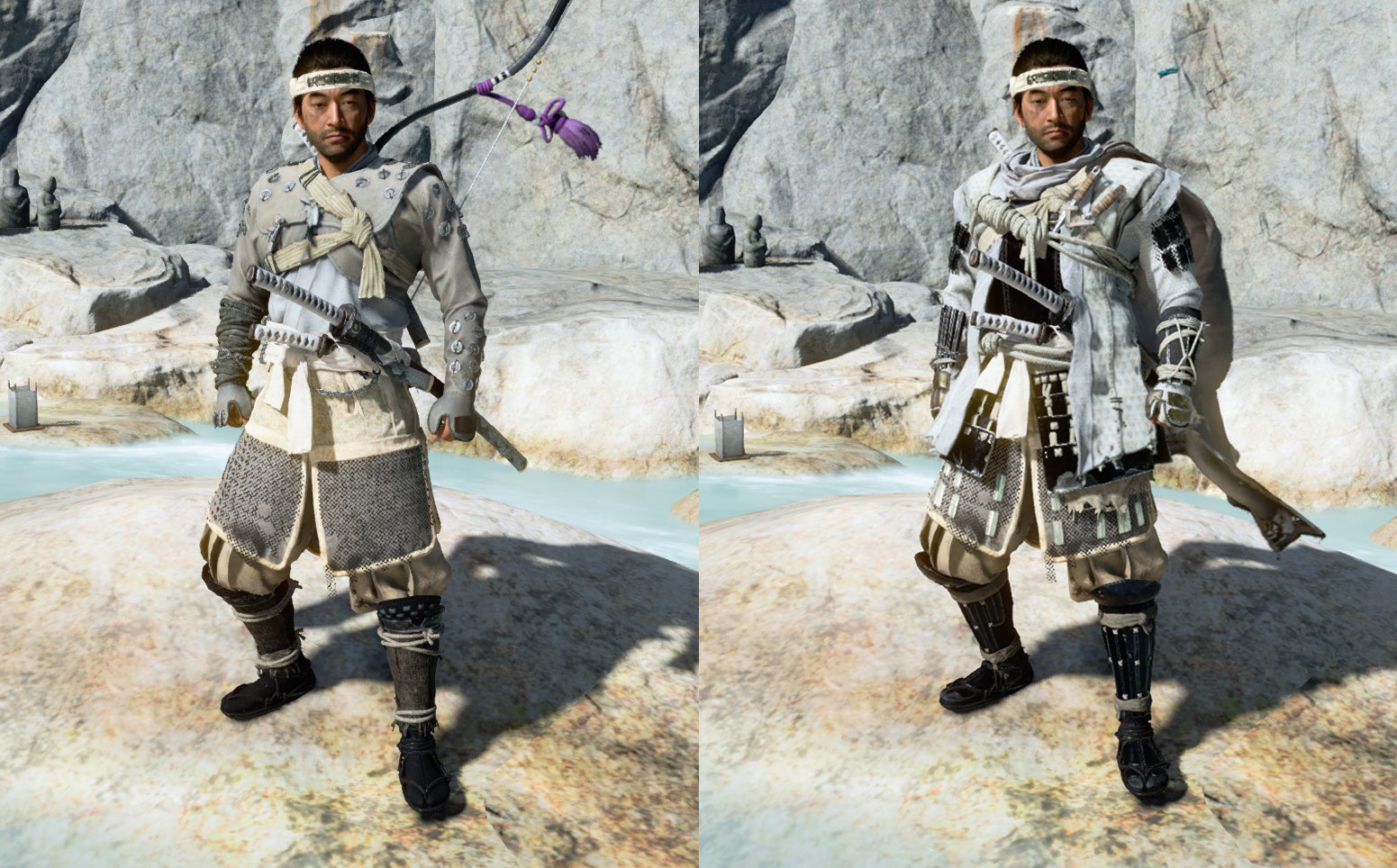 Spare Lord Shimura’s life, however, and you’ll get the Vow of Vengeance dye, a set of threads we can all admit belong on a GQ cover: 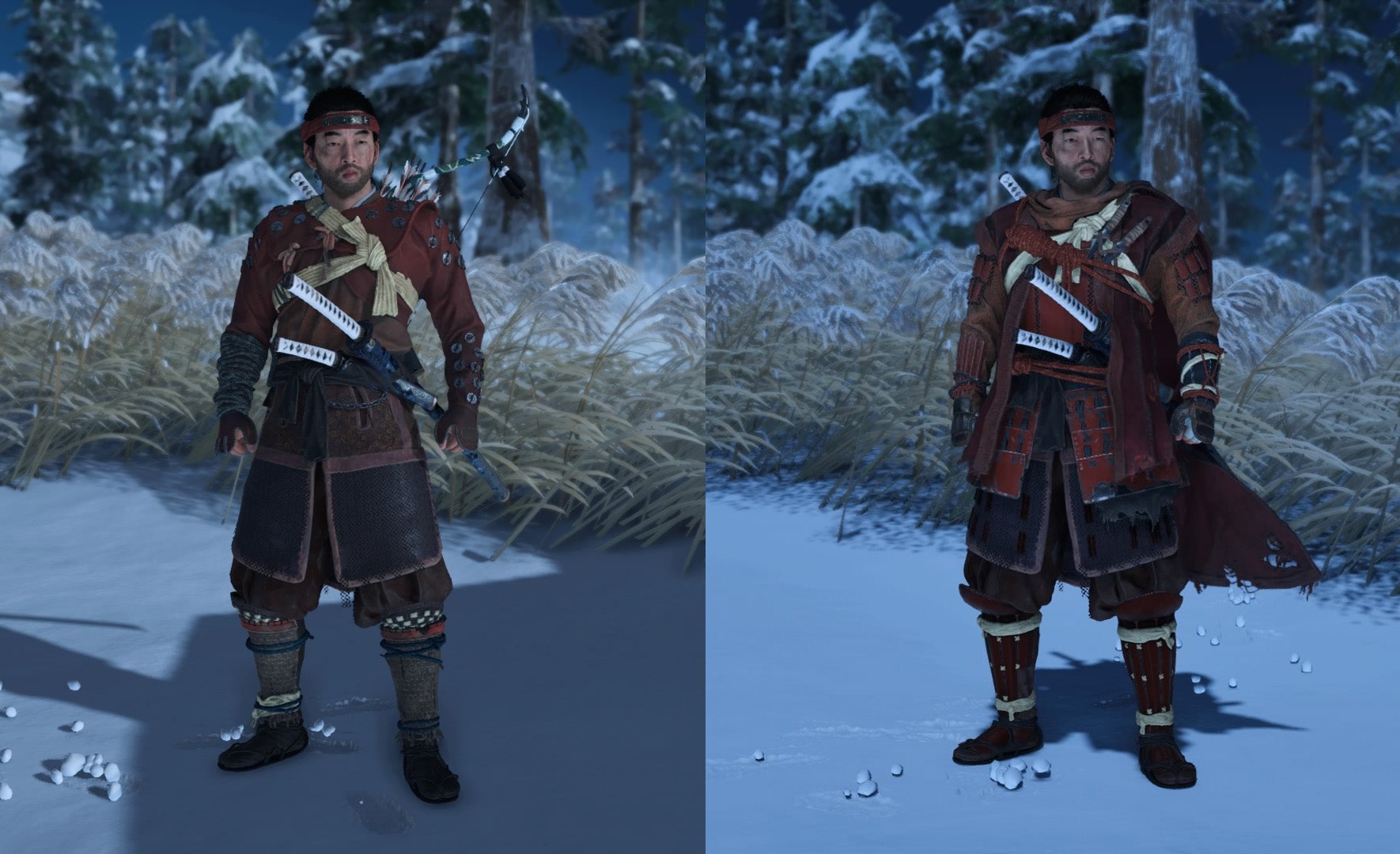 Beyond clothing, your decision also dictates where Jin resettles. Choose to spare Lord Shimura, and your new home base will be Tradition’s End, located just southwest of Omi Village. Killing Lord Shimura will give you a select piece of property a bit further down the Musashi coast called Dawn Refuge.

In the big picture, where you plant roots doesn’t really matter. As far as I can tell, both homes are identical in terms of architecture and décor. You also never really need a base of operations in Ghost of Tsushima. If you ever need to sell some iron or upgrade some gear, Jogaku Temple is just a quick fast travel away. The rest of your time is spent aimlessly roving a stunning, bloody landscape.

For the moment, there doesn’t seem to be any consequence for any potential spinoffs, expansions, or sequels. As of this writing, Sucker Punch hasn’t publicly shared which of the two endings, if any, is “canon.”

Personally, I ran through “The Tale of Lord Shimura” twice and was equally affected by both. No matter what you choose, the outcome feels in-line with Jin’s character, Ghost of Tsushima’s themes, and the larger lore that underlies this historically inspired piece of fiction. If you asked me which I thought was the “right” one, I couldn’t tell you. Both endings are fantastic. One comes from a love of tradition, one from a love of family, but both are nonetheless rooted in feelings that Jin made clear from the game’s first minutes.

To me, the choice boils down to one question: What do you want your wardrobe to look like? Whether you end up with the Righteous Punishment dye or the Vow of Vengeance one, you won’t be able to get the other. I’ll just say this: White clothing is more versatile. Like an ancient code of honour, and sticking to it despite the circumstances, it’ll never get old. Red clothing, if you can pull it off, is more of a statement – just like the choice you have to make that unlocks it.