The Best Side-Quests in Ghost of Tsushima

Ghost of Tsushima is an open-world game, which means you spend a lot of your time tackling side-quests. Having completed all 92 quests in the game, here are the ones you don’t want to miss.

Quests in Ghost of Tsushima are gussied up in unconventional nomenclature that can be tough to parse at first. Here’s how they’re broadly categorised:

Many side-quests follow a script: go to a place, fight some Mongols. If you’re lucky, you might do some Witcher-style investigating. Sometimes, you’re tasked with rescuing someone, in which case you’ll usually end up reaching them a minute too late. (Ghost features a lot of “Sorry, but this person you loved is now dead” conversations.) But some of the side-quests are true standouts, such as the ones below.

One early story mission, “The Broken Blacksmith,” requires you to sneak through Azamo Bay, a Mongol-occupied hamlet on Tsushima’s southern shore. For narrative purposes, you can’t engage in combat. So you’re forced to meekly worm your way through the enemy’s ranks, thinking of ways you can take them out all the while. “Unfinished Business” gives you that chance.

Once you beat “The Broken Blacksmith,” you hear word that some Azamo Bay village elders are still held captive by Mongols. That, obviously, cannot stand, so you head back to set them free. There’s no narrative twist here, but, from a gameplay perspective, no side-quest comes close to matching the brilliance of “Unfinished Business.”

There are multiple neighbourhoods in Azamo Bay, each with a captive elder and a small cadre of Mongol troops. You’ll need to approach them all differently, with a mixture of stealth and combat, if you want to make it through with the elders intact. The whole quest culminates with a gruelling one-on-one duel that kicked my ass for 20 minutes straight. (Other Kotaku staffers had an easier time.) “Unfinished Business” is the first side-quest to truly test your mettle by forcing you to use all of the tools at your disposal.

In Sensei Ishikawa’s first quest, “The Tale of Sensei Ishikawa,” you learn that one of his former students, Tomoe, has taken up a teaching post in the Mongol army. To save herself, she’s agreed to pass along Ishikawa’s signature Way of the Bow to the invading army’s archers. So begins a game of cat-and-mouse that spans all three acts and all three regions of Tsushima. 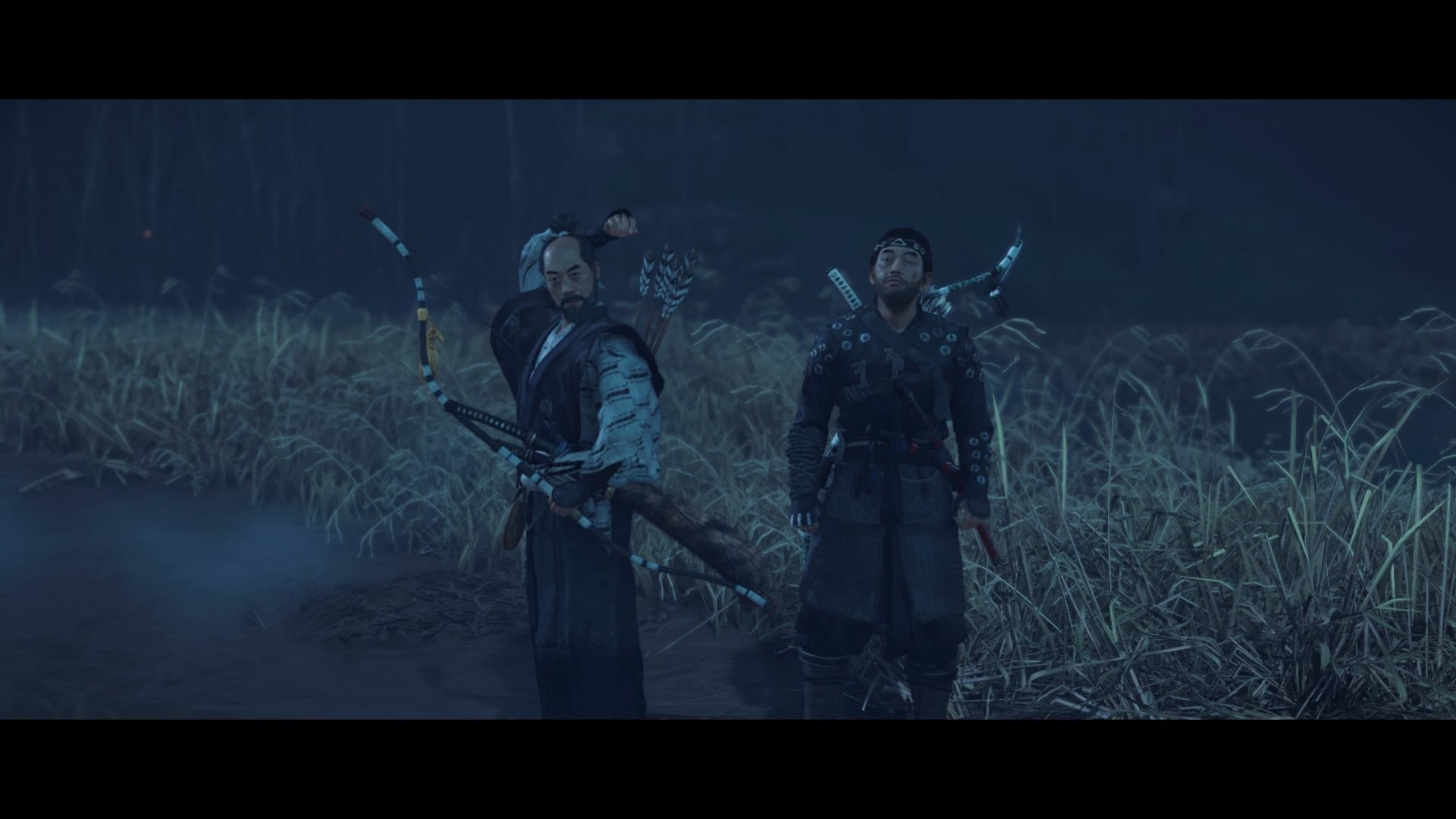 Over the course of nine missions, you watch as Ishikawa comes to terms with carnage wrought on his homeland because of methods he pioneered. The result is a plotline that, in my mind, is more emotionally impactful and genuinely surprising than the main story. There’s also one fun mission that peels back Jin’s veneer of composure by revealing just how little game he has.

(Bonus tip for fans of the science-fiction TV show The Expanse: Play these missions with the English voice track on. Francois Chau, who plays Jules Pierre-Mao in the show, lent his talent – and his unmistakable gravely pipes – to bring Ishikawa to life.)

Standout Missions: “Friends In Passing,” “Laid To Rest,” “The Ghost and the Demon Sensei”

Ghost of Tsushima starts on Komoda Beach, where the Mongols stage their invasion. In the ensuing battle, the vast majority of Tsushima’s samurai are wiped out on the spot, kickstarting the game’s plot. For the most part the game doesn’t reckon with this outside of some narrative hand-waving. Lady Masako’s questline forces you to return to Komoda Beach, where the bodies are still charred and smoking. 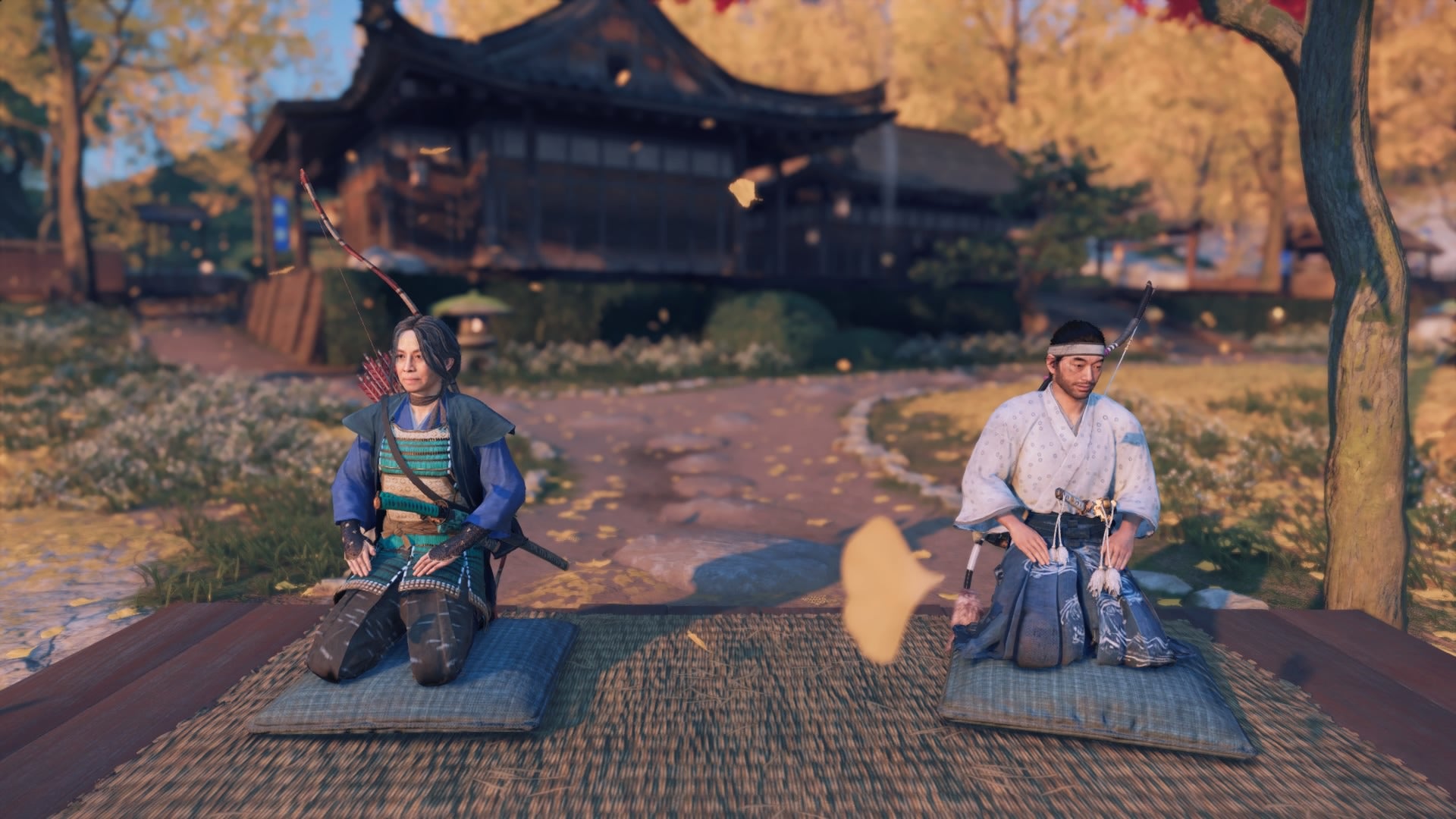 That’s just one of countless resonant moments in Lady Masako’s questline. At the start, when you’re trying to recruit her to aid in the rescue of Lord Shimura, you learn that her entire family has been murdered in cold blood. Your goal involves tracking down the culprits and doling out some justice. It sounds much like the main plot – oh, cool, another revenge story – but there are lots of twists and surprises here. That it’s all anchored around Lady Masako, one of the game’s most fully realised characters, is even more reason to dive in.

As with Sensei Ishikawa’s questline, Masako’s nine-mission narrative spans the course of Tsushima’s three acts and regions. In the tapestry of plots that is Ghost of Tsushima, the ending of Lady Masako’s thread packs the strongest punch.

Standout Missions: “A Mother’s Peace,” “The Family Man,” the ninth one (name withheld for spoiler purposes)

“The Other Side of Honour”

Just trust me: This one’s hilarious.

“Fit For the Khan”

Of Tsushima’s three regions, Kamiagata is the toughest to defog. The wintry wilderness is indeed pretty, but, in its snowy similitude, it can be difficult to navigate. Occasional blizzards sure don’t help. Various optional objectives are more scarce than they are in the south, too; you can easily trek 800 metres or more before coming across a single shrine or a hot spring to use as a waypoint. (Compare that to the density of Izuhara and Toyotama, where you can barely go 400 meters without running into some sort of distraction.)

“Fit For the Khan” doesn’t offer anything new in terms of plot. It won’t blow your mind with creative level design. But it will give you three waypoints that help a lot with clearing up the cartography of Kamiagata. You’ll also get a combat-focused set of armour. For an easy Act III, do this quest as soon as it opens up.

“The Art of Seeing”

Soon after you reach Toyotama, you meet Yuriko, an elderly woman who cared for Jin while he was a pup. Her first quest, “The Proud Do Not Endure,” will give you tangible prizes, including one nifty tool that shifts how you can approach stealth sections. Her second quest, “The Art of Seeing,” will not give you such goodies. The only thing you’ll walk away with is a heavy heart.

“The Art of Seeing” is one of a few quests in Ghost of Tsushima that doesn’t feature a single second of Mongol-killing. Instead, it’s spent taking in the scenery while on an introspective stroll with a woman who’s lived a full life – one of those quiet moments that this game could honestly use more of. Take a minute to hear what she has to say. You can get back to slicing and dicing and using that other thing Yuriko gave you later.

If you only have the patience for a few mythic quests, prioritise these:

“The Curse of Uchitsune” and “The Legend of Tadayori”: The first quest gives you a special bow that allows you to zoom in from great distances. The second one gives you a set of armour that restores your concentration meter – the ability that allows you to slow down time when aiming a bow – with every headshot. Of all the game’s potential loadouts, equipping these two prizes gives you the most stopping power. 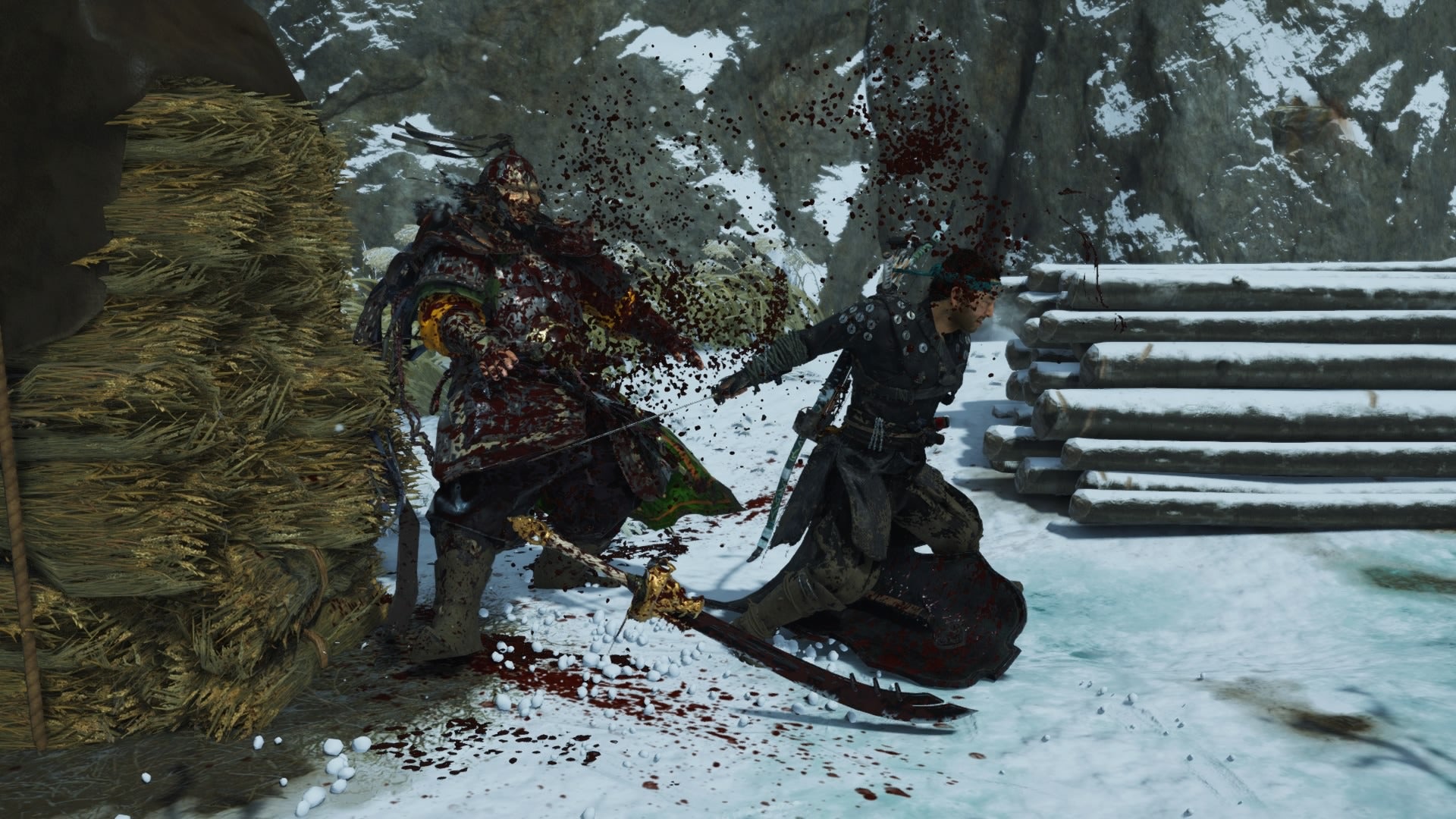 The Heavenly Strike in action.

“The Heavenly Strike”: Few combat moves are better than the Heavenly Strike. For one, it cuts through the defence of any enemy, no matter how large their shield. (Once you level up the Sakai Katana a bit, this takes out lower-level troops in one hit.) For another, it requires just one resolve point. Pair that with the perfect parry – which restores some resolve whenever you successfully pull it off – and you can more or less use this move with abandon.

“The Six Blades of Kojiro”: Those who enjoy Ghost’s one-on-one duels will get a real kick out of “The Six Blades of Kojiro.” In Toyotama, you hear that a guy named Kojiro wants to duel you to the death. To get to him, you first need to duel his five disciples. These bouts are all set in some of the game’s most stunning backdrops: at the base of a waterfall, or amid an autumnal forest clearing at the edge of a cliff. The final fight is framed with such beauty that you really just need to see it for yourself. You get a sweet-looking set of armour at the end of these map-spanning efforts, but it’s about the journey, right? 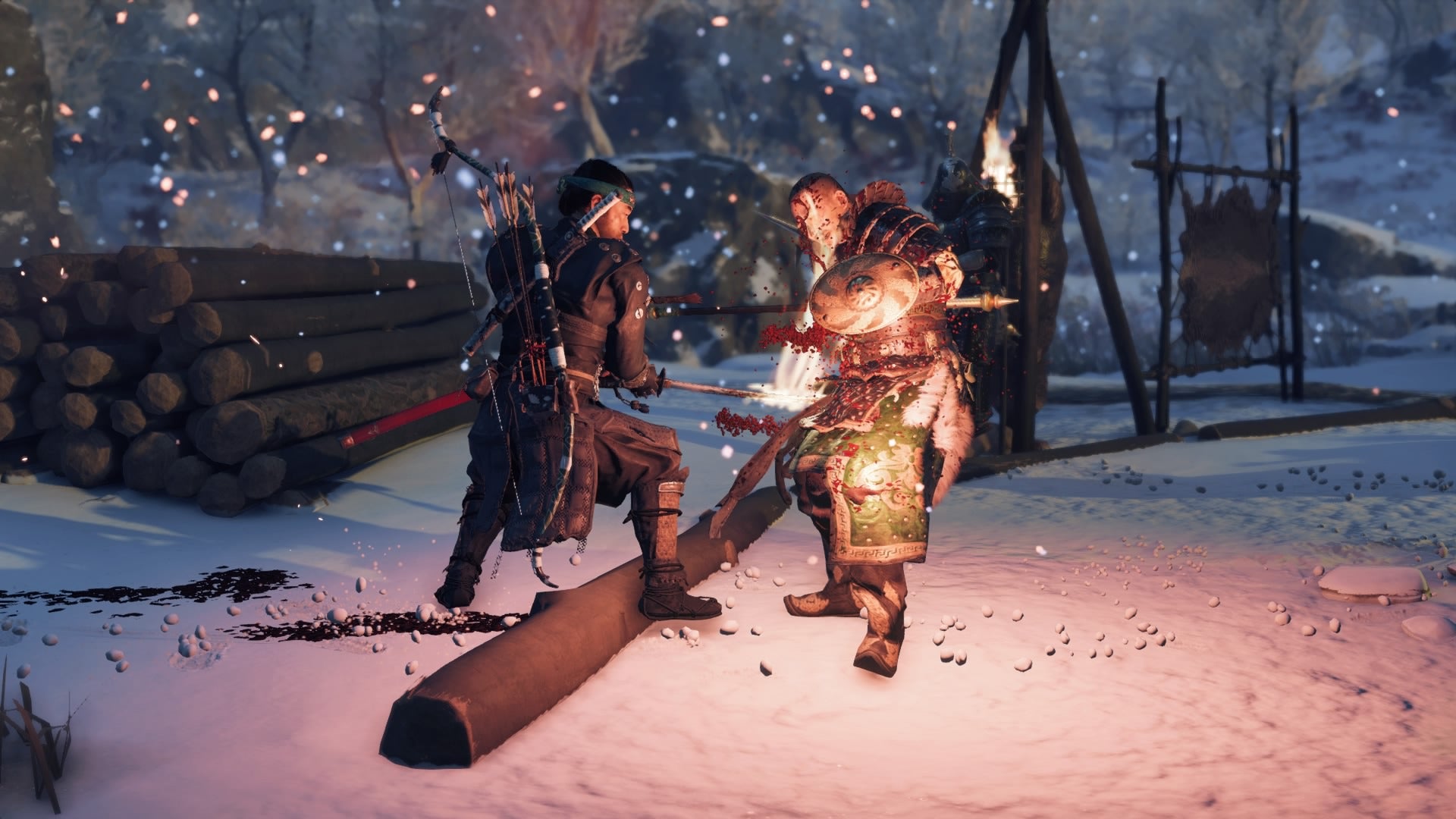 You can't beat an on-fire sword.

“The Undying Flame”: “The Undying Flame” is the only side-quest that makes the most of Ghost’s platforming potential. To shamelessly lift from Ian’s review, “In the swirling vortex of the blizzard, learning how to spot footholds and places to attach Jin’s grappling hook become vital.” Oh, and when you’re done, you can light your sword on fire.