Weeks after The Last of Us Part 2 was review bombed on Metacritic, the video game review aggregation website now requires people to wait more than a day after a game’s release to submit their personal reviews.

Metacritic publicises two review scores for any game: the Metascore based on critic reviews and the User Score based on reviews submitted to the site by random Metacritic users. In the past, users could begin posting their scores for games as soon as they released, without necessarily even having had time to actually play them. Now, Metacritic has confirmed to Kotaku that it’s implemented a new “waiting period” to try and cut back on the number of obviously erroneous user reviews.

“We recently implemented the 36-hour waiting period for all user reviews in our games section to ensure our gamers have time to play these games before writing their reviews,” a spokesperson for the site told Kotaku in an email. “This new waiting period for user reviews has been rolled out across Metacritic’s Games section and was based on data-driven research and with the input of critics and industry experts.” 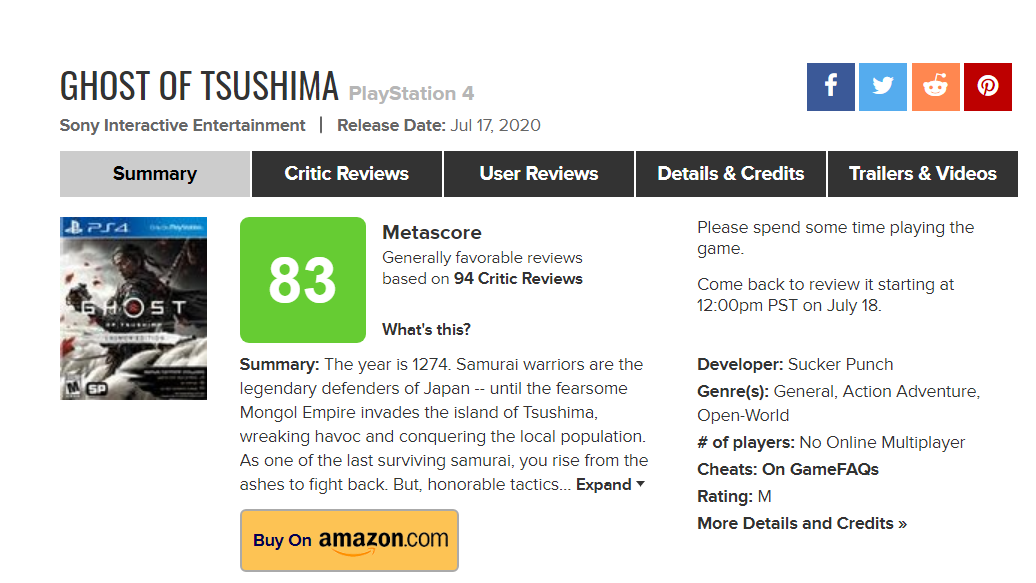 People first began to notice the new requirement earlier this month. On July 8 a thread from the gaming forum ResetEra showed the new waiting period language on the review page for the console release of the 2019 puzzle game Superliminal. Forbes writer Paul Tassi then noticed the language again today as people poured over the Metacritic pages for Ghost of Tsushima and Paper Mario: The Origami King, both of which released today and have the new waiting 36-hour waiting period for user review submissions.

One of the more notorious and most recent examples of Metacritic users deriding a game they’d barely played was The Last of Us Part 2. Within hours of release its User Score cratered, seemingly driven by people angry over what they’d thought they’d learned about the new game’s story through leaks in late April.

But review bombing has been a big problem on Metacritic and other crowd-sourced review platforms for a long time now. When Kotaku asked Metacritic earlier this year what it was doing to combat review bombing, the site said it regularly had moderators scanning for unusual behaviour and removing reviews that violated its terms of service. While this new measure doesn’t prevent review bombing, it does put the brakes on it a bit.

When asked if what happened with The Last of Us Part 2 was a factor in creating this new waiting period, a spokesperson for Metacritic told Kotaku this new policy was not implemented “in light of any particular game.”