Since 2016, Overwatch’s McCree, a walking amalgam of cowboy movie references, has been able to slap an image of a noose on any surface he pleases, provided players have unlocked the decal in question. Now, as of the game’s most recent update, it’s gone.

The noose was always a curious inclusion in a family-friendly game like Overwatch, given that nooses – while present in cowboy movies – make for grim imagery even before you add a long history of racist lynchings to the equation. A simple lasso probably would have fit a (mostly) goody two-boots like McCree better. With the game’s latest update, Blizzard has opted to replace the noose with a horseshoe that says “Bad Luck” on it. The company has not explained why, nor has it drawn attention to the noose’s removal. Instead, players noticed the change yesterday and posted about it on Reddit, the official Overwatch forums, and Twitter. 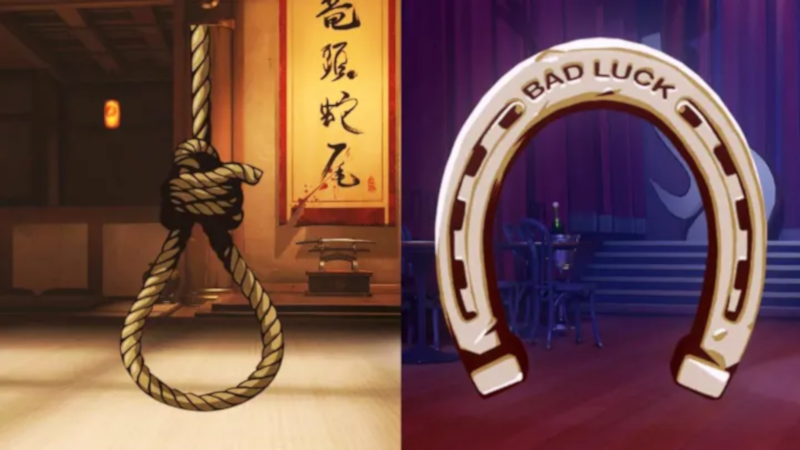 Blizzard’s timing seems to speak for itself. The ongoing Black Lives Matter protests in the wake of George Floyd’s murder and sustained police violence have forced many companies to rethink racially charged symbols and creative decisions. In addition, the noose itself has become a prominent part of national discourse due to the recent discovery of a rope tied like a noose in the garage stall of Bubba Wallace, a Black NASCAR driver, as well as a series of deaths by hanging that authorities declared suicides, but that some people are demanding be investigated as racially motivated murders.

Even with the noose spray gone, Overwatch is still in an odd spot. On Twitter, some fans have suggested that Blizzard should now remove Overwatch’s police skins, which belong to Brigitte and D.Va, while others vehemently oppose that idea on the grounds that neither specifically represent American police forces. That said, both Sweden and South Korea – where Brigitte and D.Va, respectively, are from – have their own histories of racism and police brutality to contend with. Additionally, Brigitte’s police skin leans hard into the idea of police militarisation, a global problem that, among many other things, has facilitated violence against Black Lives Matter protesters in recent months. Despite all this, when paired with cheery heroes and absent further context, in-game representations of the police-enforced status quo come across as endorsements, because, well, that’s how status quos work.

Overwatch also finds itself at a broader crossroads: In the game’s fiction, the Overwatch organisation was essentially a team of super-powered world police. As people in America and across the world continue to reevaluate society’s relationship to the very idea of policing, the central goal of Overwatch’s heroes – to get the old band of unstoppable ultra-cops back together – is starting to feel retrograde. With other media properties like Brooklyn 99 taking a long, hard look in the mirror, it might be time for Overwatch, which similarly purports to focus on a diverse cast and lighthearted heroics, to more thoughtfully consider what it really means to be a hero.