Hyper Scape Is High-Flying Fun, But It's Still Another Battle Royale

In competitive shooters, I prefer to be above my enemies. I grew up playing Tribes, a game about jetpacks and split-second geometry calculations. In Overwatch, my favourite hero is Pharah, whose speciality is jetpack with a side of rocket launcher. Maybe I just really like jetpacks. Still, Hyper Scape is the ideal battle royale for somebody like me. Its map is practically pockmarked with jump pads. Its floors may as well be lava. The sky is home.

Hyper Scape, the new Ubisoft battle royale that entered open beta over the weekend, is familiar in many ways. Its slick cyber aesthetics belie a standard battle royale formula: Up to 99 players enter, and one – or three, in squad mode – leaves. The game’s look, tone, and even mobility moves (hello, crouch-slide, my old friend) are reminiscent of Apex Legends. If you’re looking for a battle royale that turns the formula on its head and shakes it until something entirely new falls out, this isn’t it. But it is very clever.

Speed and verticality are the main elements that give this one its shine. Buildings sprawl upward rather than outward, and you spend a lot of your time either scavenging up their interiors for weapons and powers or soaring above them with the help of jump pads and mobility abilities. While games like Fortnite have moments of vertigo-inducing antics, Hyper Scape bakes them into nearly every encounter. Losing a close-range duel to somebody using a shotgun? A jump pad is probably only a few feet away. Need a better vantage point for your sniper rifle? Rooftops abound. Cornered inside a building? Break a window, leap, and pray. Also, probably aim for a jump pad.

All of this flying and clambering around makes Hyper Scape feel frenzied. You’re always on the move, always scrambling and seeking rather than hiding and sneaking. Pair that with a relatively small map, and you’ve got a recipe for an enjoyably fast pace. In service of this, the game also streamlines some of the more fiddly elements of the battle royale formula. Instead of customising weapons, you “fuse” guns with copies you find scattered about. Each time you fuse a weapon, it levels up, gaining better stats. It only takes a single button press to do this, so you can get your weapon up to max while on the run. (Same goes for powers – known as “hacks” in-game – which you can carry two of at any given moment.) The icons that indicate which weapons and powers are which could stand to be more readable at a distance, but otherwise, it’s a good system. 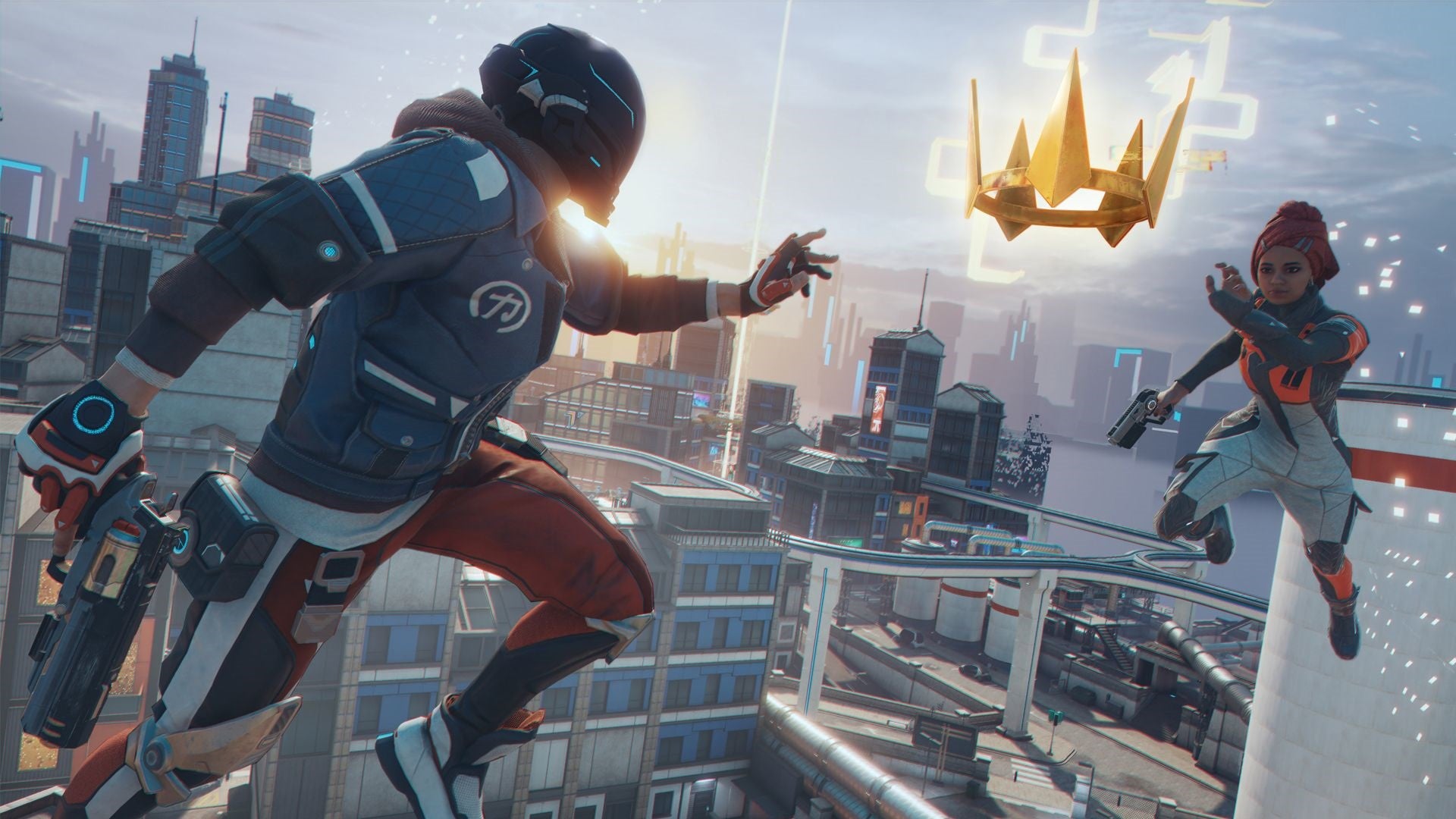 The hacks add fun wrinkles to the proceedings, with some providing expected advantages (healing, armour, invisibility, etc.) while others give you a big mobility boost (teleport, ball, slam). Two weapons and two powers at a time might not seem like a lot, but they can coalesce into some pretty cool strategic options. For example, max-level slam’s cooldown timer is short enough that you can basically cosplay as Winston from Overwatch, leaping around the map and blasting opponents with an energy cannon. This strategy works especially well if you’re able to pull it off during Hyper Scape’s endgame, which is also unique. While last-person-standing rules still apply, the final segment of each match sees players vie for an item called the “crown.” If anyone can hold onto it for 45 seconds, they win the match. However, upon snagging the crown, their position is immediately revealed to other players. This turns matches’ final minutes into a series of high-octane chase scenes, a change of pace that keeps play aggressive until the very last second.

Hyper Scape sprinkles small innovations into other cracks in the battle royale genre’s foundation, too. Building on revival systems in games like Fortnite, Apex Legends, and Call of Duty: Warzone, Hyper Scape’s squad mode allows fallen players to persist as “echoes,” aka invisible entities who can still move freely about the map and scout locations for their teammates. Enemies, meanwhile, drop restore points upon departing this world for the spooky (though remarkably utilitarian) world of echoes, and if you, as an echo, navigate to one, your friends can revive you from there. 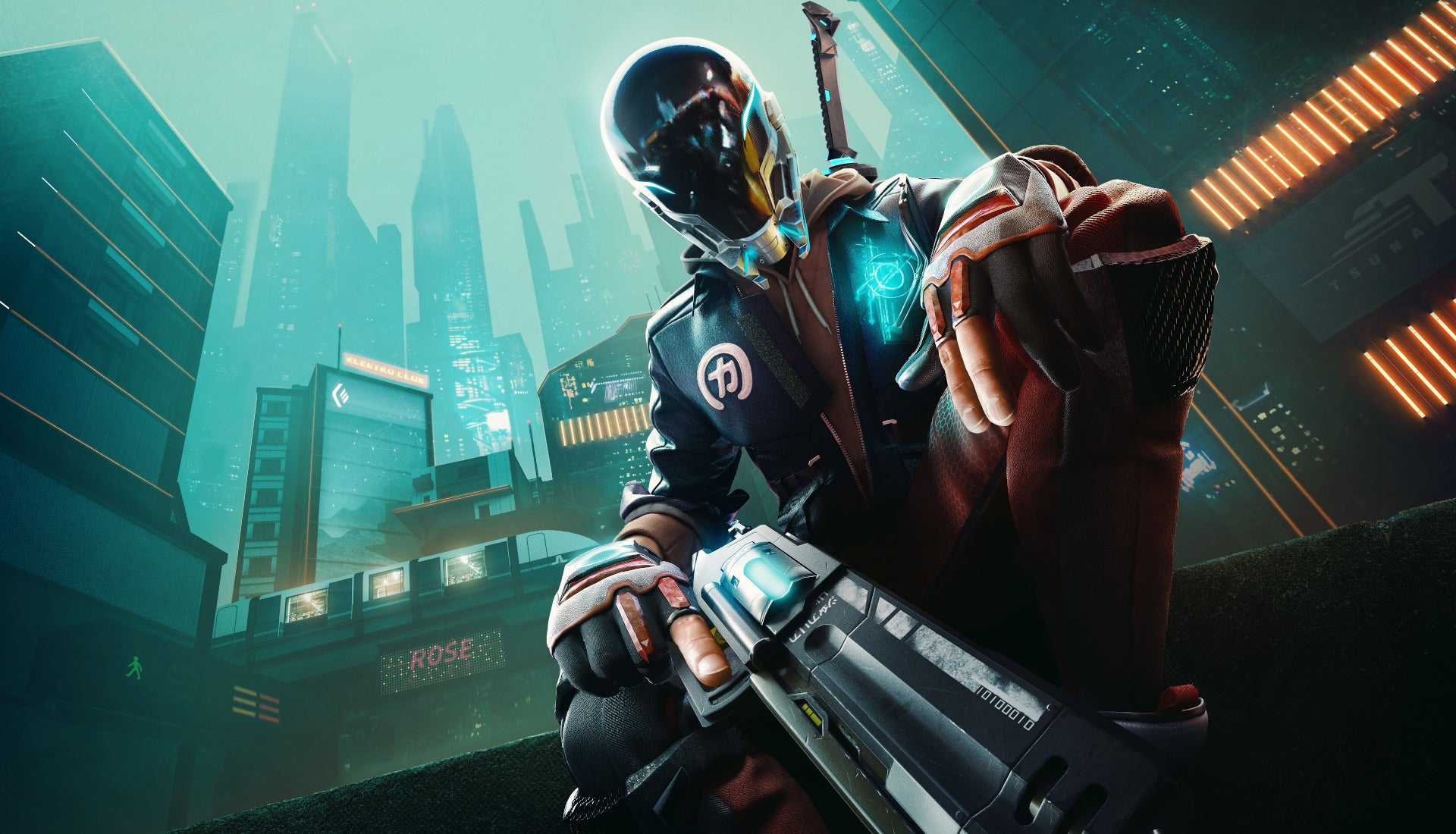 The innovation that initially intrigued me most, though, exists outside the game itself. Ubisoft built Hyper Scape with Twitch in mind, saying that its goal was to make something “as spectacular to watch as it was to play.” Even in this era of big companies leveraging Twitch for all the marketing they can get, I’ve yet to see many really hone in on what it means to make a game with the idea of viewability in mind. Fortnite is fun to watch, but that was more a happy accident than Epic’s goal from the get-go. Esports have plenty of fans, but how many can you show to your parents without having to press pause and explain a tiny, idiosyncratic detail every five seconds? And even then, how many really try to emphasise spectacle – a lightning-in-a-bottle term that could describe anything from Fortnite’s candy-coloured chaos to Counter-Strike’s glacial yet nail-bitingly tense showdowns?

In some ways, I admire what Ubisoft came up with. Turning the end of each match into a wild chase, especially, is a masterstroke – a shift that all at once communicates that a game is in its final phase, establishes new stakes that are easy to understand, and infuses each remaining moment with a fresh flavour of tension. But the rest, at least from a viewer’s perspective, is relatively standard battle royale fare, and the main spectator-driven feature, Twitch integration, comes off as gimmicky.

Matches, you see, unfold similarly regardless of whether Twitch streamers and viewers are involved. At certain points during each match, the game throws players a curveball. This might mean a sudden, brief period of low gravity across the entire map, which is admittedly very fun. Or players might suddenly find health packs everywhere, or they’ll be extremely visible to each other, or everyone might get infinite ammo for several seconds. Normally, the game just unleashes one of these effects on players, but if streamers are playing, their viewers can vote on which one gets deployed. It’s an enjoyable twist, but as a viewer, it didn’t really make me feel more invested in matches, and half the time, everybody just picked anti-grav, because – somewhat fittingly – it’s the most obviously spectacular option available.

Hyper Space has some cool ideas and is, some mostly minor bugs aside, competently put-together, but what Ubisoft does next will decide whether or not it has any real staying power. These days, no matter where you look, every upturned stone has several pretenders to the battle royale throne clinging to its mossy underbelly. We are, in other words, far past the point of genre oversaturation. Hyper Scape is off to a decent enough start, but at this point, “decent enough” will only take you so far.