Death Stranding, a very, very good PlayStation 4 game from Hideo Kojima and his game-making friends, launches on PC tomorrow. I cannot say the game runs well on every gaming PC, for there are too many gaming PCs and my home is small. I have tested it on two of the gaming PCs I have immediate access to, however, and I’ve been pretty damn impressed.

This is not a review for Death Stranding. We’ve already had one of those. It was the magnificent work of the outstanding Heather Alexandra, and quite frankly we’d be stupid to try and recapture that magic. I was going to include an excerpt here, but the thought of a lone paragraph separated from its wonderfully worded brethren made me sick to my stomach. Go read it. It’s one of my favourite things.

No, my job here is to review Death Stranding’s PC performance. To that end, I’ve played the game on two different gaming PCs. One was an Alienware laptop outfitted with some of the best laptop hardware possible (Nvidia 2080), running at 1080p and 4K. The other was also a gaming laptop, this time from Origin PC, with even more recent laptop hardware (Nvidia 2080 Super), running at 1080p with a 240 Hz display panel. Note that both of the systems I tested the game on are well above the game’s relatively modest system requirements. 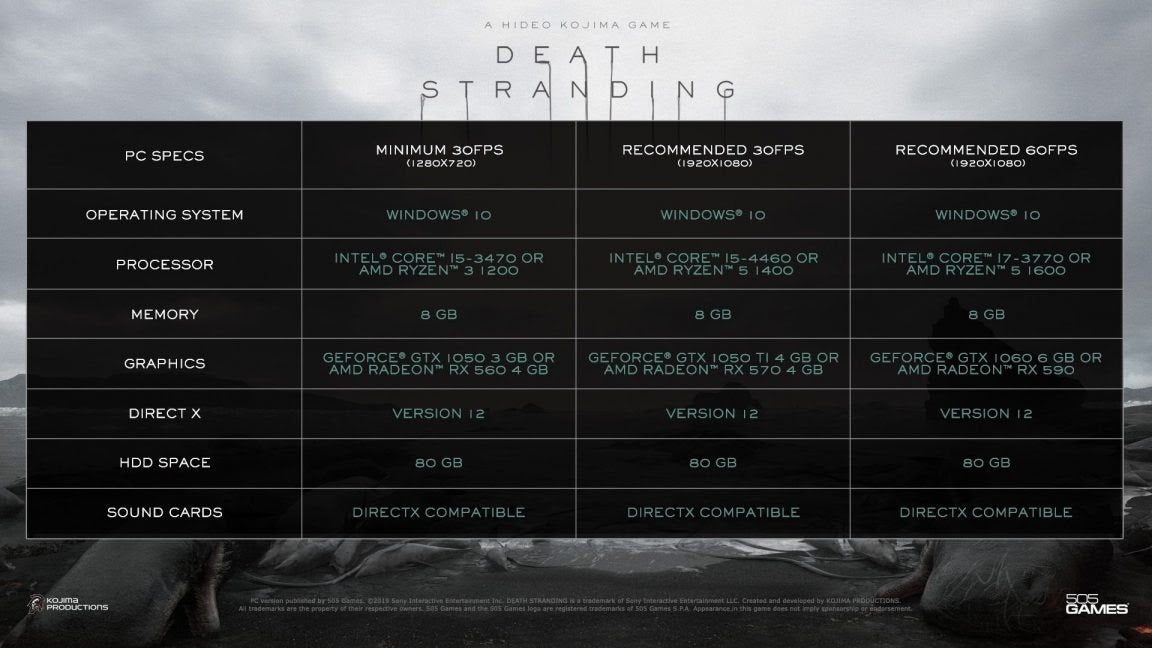 If your system is better than this, great! (Graphic: 505 Games)

Why didn’t I test the game out on an older computer with ageing components, maybe something I slapped together a decade ago to play Runescape? Because I never played Runescape, don’t be daft. I live in a relatively small flat with two kids and a spouse who might be more rabid about collecting useless junk than I am. As much as I’d like to have a special area set aside for an older PC gaming system that is bad and doesn’t work, I have no room for one.

So yes, on my admittedly very good PCs, Death Stranding ran like a dream. Once installed the game launched without a hitch. Both systems automatically upped the game’s resolution and details to their max. The initial loading of the game’s sprawling open world can take a minute and change, but once loaded, man, it runs smooth and creamy. I don’t like using those two adjectives together when not talking about food (and even then), but they are the best two for this situation. I would have expected a game so vast to chug, and I would have accepted it chugging, but there’s no damn chug.

I wasn’t allowed to capture my own screenshots from my early time with the build. That means the screens you see here are all handpicked by Kojima Productions. They are all ultrawide, because the developer is very proud of how well the game implements ultrawide support. Even the cutscenes are ultrawide, when normally they’d have black bars at the side. Death Stranding PC is a good reason for going ultrawide. Or super ultrawide for that matter. 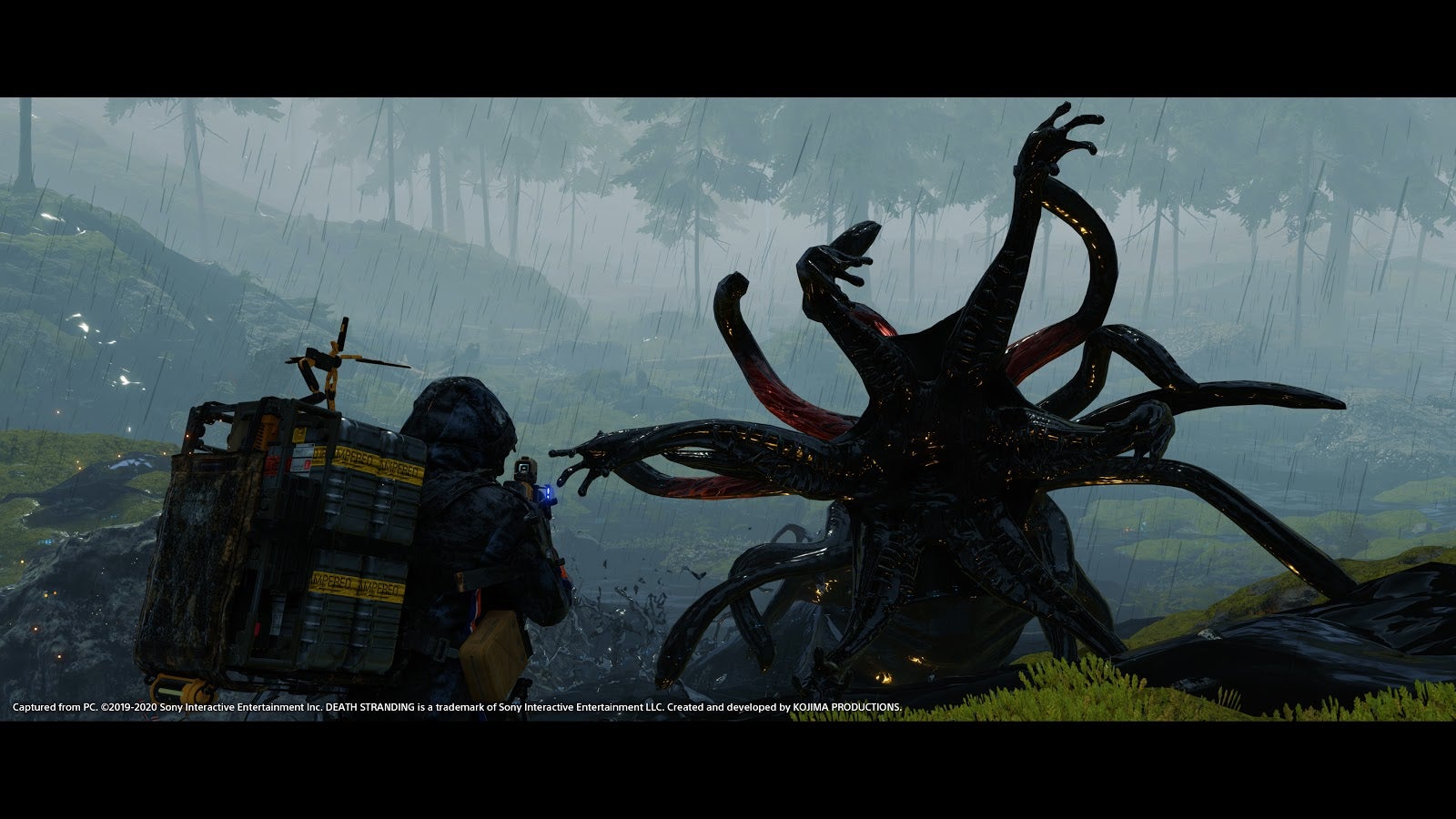 This shot is particularly moving because it is one of the several provided me. (Screenshot: Kojima Productions)

I was also not allowed to capture my own video from the early access event, which is weird, because the video I did capture is beautiful. Check out how the game runs in the launch trailer. It’s like that.

What’s even more impressive is another thing I can’t show you, which is how well the game performs using Nvidia’s DLSS (Deep Learning Super Sampling), an RTX technology that uses machine learning to boost framerates and performance. Here’s a quick explanation from the game’s reviewer’s guide.

DLSS works by training a deep neural network on tens of thousands of high-resolution beautiful images, rendered offline in a supercomputer at very low frame rates and 64 samples per pixel. Based on knowledge from countless hours of training, the network can then take lower-resolution images as input and construct high-resolution, beautiful images.

Basically what this all means is DLSS renders at a low resolution and uses AI to construct high-resolution images. In terms of Death Stranding, it means I can run the game at 1080p, switch on DLSS, and up the resolution to 4K with barely a performance hit. I was so impressed I tweeted about it. I even promised a preview for July 2. That bit was obviously a lie.

I am playing #DeathStranding on PC right now, will write a preview tomorrow. I will say this. Performance with my LAPTOP @NVIDIAGeForce 2080 (with MaxQ) is nuts. I went from 1080p to 4K with barely a performance hit.

Of course Nvidia’s DLSS technology requires a Nvidia RTX graphics card. Both of my gaming systems had one, but yours may not. I’m sure Radeon is doing nice things, too. Look, it’s not my fault. No one wants me to have a Radeon-powered laptop.

I did not have as much time with Death Stranding on PC as I could have. I played through the early moments, blazed some trails, was reminded to call my mother, and I stumbled about with boxes on my back quite a bit. Right now I am waiting for the full game to go live on Steam tomorrow, so I can continue my efforts, maybe get some of those Half-Life crossover missions out of the way so I can make those two worlds collide. 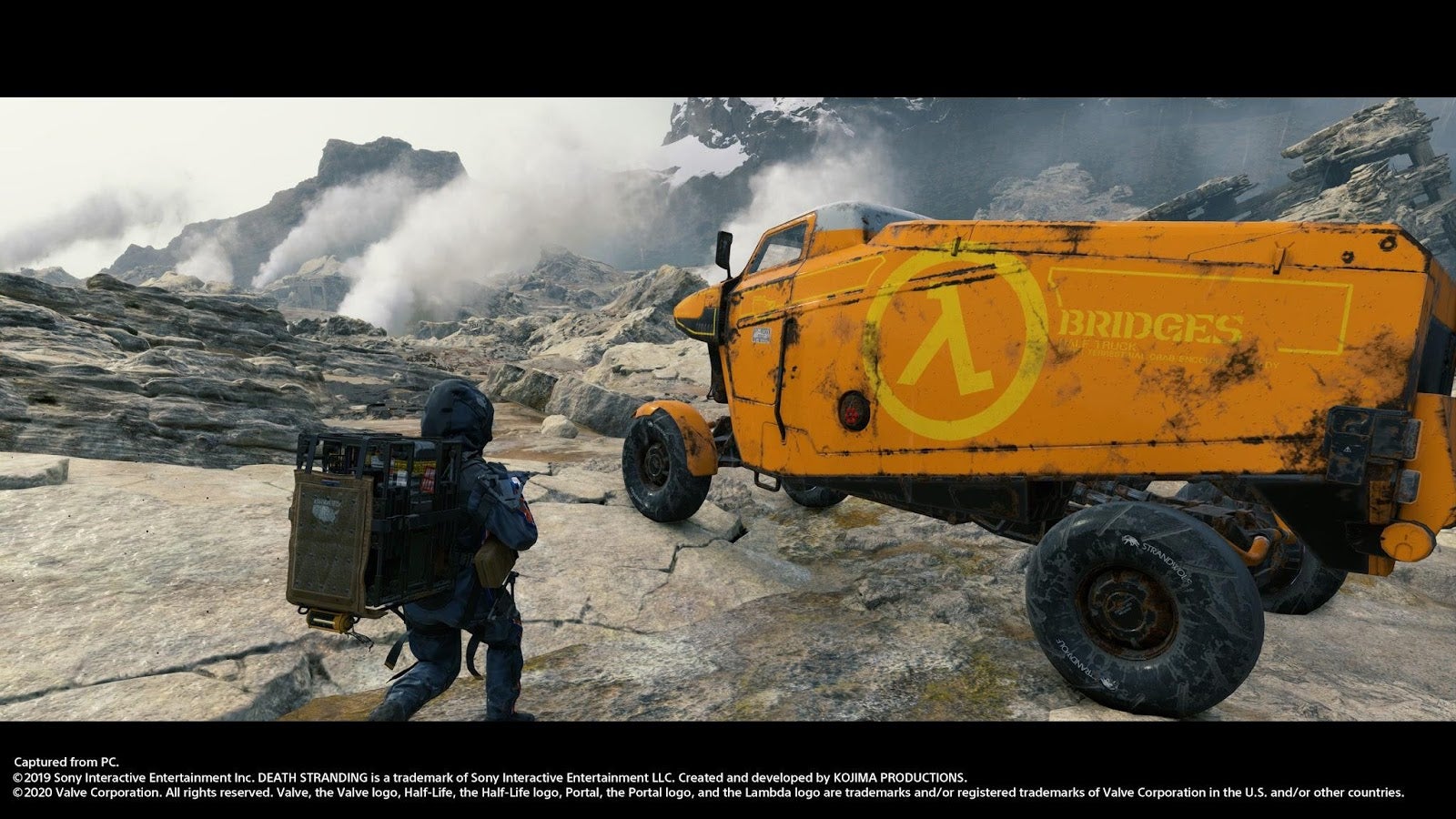 Can you spot the Half-Life logo? It’s right there. On the truck. See it? Okay, do you see Bridges? Look left. (Screenshot: Kojima Productions)

Here’s hoping the game runs as well on your PC as it did on my two systems. If it does, you’re in for a real treat.