Long-running video game franchises (or, uh, in this case very short ones) all have to start somewhere, and it’s not always pretty. Looking back to that origin point can show us not just how the greats began, but how far they’ve come since. Today we unearth the very first Rocko’s Modern Life video game.

So, What Was The First Rocko’s Modern Life Game?

Rocko’s Modern Life: Spunky’s Dangerous Day. Viacom New Media released it for the Super Nintendo way back in April of 1994. It stars Rocko and his dog Spunky, who runs off each level, forcing players to protect and help the dog.

What Kind Of Game Was It?

It was a game all about protecting a single NPC, your dog, who moves through levels and... okay, yeah, this is basically a game made up exclusively of escort missions.

Rocko controls as you would expect. He can jump and run around and has a melee attack, though it’s not very reliable. I felt like I missed enemies that I should have hit. If that was all the game was, it would have been fine. Maybe, with the right levels, it might have even been good! However, the other big part of this game is the dog, who you have to help throughout each level. The dog sucks. I hate Spunky. Within the first 10 minutes of booting up the game, I grew tired of dealing with this pup. Everything is an obstacle to him, and babysitting him isn’t much fun.

As you play through the 16 levels, spread across four stages, you’ll have to protect this annoying dog from enemies like crabs and help solve puzzles to cross dangerous gaps or more mundane things like shallow puddles of water. I thought dogs could swim? Not Spunky. The end goal in each level is to get the pup to a golden hydrant.

The show’s iconic theme song, performed by The B-52s, didn’t actually become a part of the show until after season two. And Spunky’s Dangerous Day started development before the show even aired. So instead of a fun MIDI cover of that iconic song we got something very different. I still like it, but it’s nowhere near as memorable as the show’s theme song.

Tell Me Something Interesting

As I mentioned, the game started development before the show aired or had even finished production on season one. This meant the game’s developers had to work with sketches and early concept art for a large chunk of Spunky’s one-year development cycle.

When you take that bit of trivia into consideration, it’s impressive how close a lot of the visual designs are to their television counterparts. This early development period did have an effect on the content though, as the game is only based on very early episodes of the show. In fact, one stage in the game, Trash-O-Madness, is named after the original pilot and animated short that spawned the whole franchise.

This was not only the first game based on the series but the only game ever. Rocko has appeared in a few other Nickelodeon ensemble games, including a kart racer, but he only starred in this one outing.

Were Critics Into It?

While it’s hard to find reviews of this game online, magazines of the era subjected it to critical evaluation.

Spunky’s Dangerous Day got a lot of positive reviews, which is odd considering how annoying I found it in 2020. The first two members of Electronic Gaming Monthly’s Review Crew scored it 9 and 8, praising its visuals. (The other two gave it 5s, which makes more sense to me.) Game Fan’s three critics all gave the game high scores. GamePro’s score, as usual, was a variety of weird faces. Some reviews did mention how sometimes Rocko’s dog doesn’t cooperate, and how this can cause some issues. But it seems nice visuals and animation overcame any consternation over the annoying pup.

More recent reviews haven’t been so positive. A lot of criticisms focus on how hard the game can be and how annoying it is to escort Spunky. Reading comments on YouTube, you’ll find a lot of people who remember this game and played it a lot in their youths, but it seems almost none of them ever beat it.

Here’s the ending. (Spoilers!) The dog is saved and Rocko gives him a big hug. Who cares! More interesting and wild are the credits that roll after this short ending. Weirdly impressive and lavish for a licensed platformer based on an animated Nickelodeon show. (Rewind the vid if you want to see what the gameplay’s like.)

A copy of Spunky’s Dangerous Day won’t set you back all that much. Most loose carts are selling for around £16-25 on eBay. I did spot a few boxed and sealed copies for about twice that but considering this isn’t a highly sought-after game, I doubt there’s much demand.

What Else Did The Developers Do?

Not much. Spunky was developed by Viacom New Media, a game development studio owned and operated by Viacom, the parent company of Nickelodeon. Most of its output was licensed games, so the web has very little info about them.

According to what little info there is about the studio, after Rocko on SNES the developer would go on to make a slew of other Viacom-adjacent video games. One of the weirdest they developed was MTV’s Club Dead, an FMV horror-mystery where players are in a futuristic hotel and have to solve murders. What does this have to do with music or the MTV network? I have no idea!

Not really. While die-hard Rocko fans might get a kick out of it, the game isn’t much fun and doesn’t play well. As a SNES game, it’s easily emulated, so if you want to give it a shot there’s always that option. Or you can grab a cheap copy and play it for real on your SNES. However, a better use of your time might be actually watching the fantastic and funny Rocko’s Modern Life cartoon it’s based on. 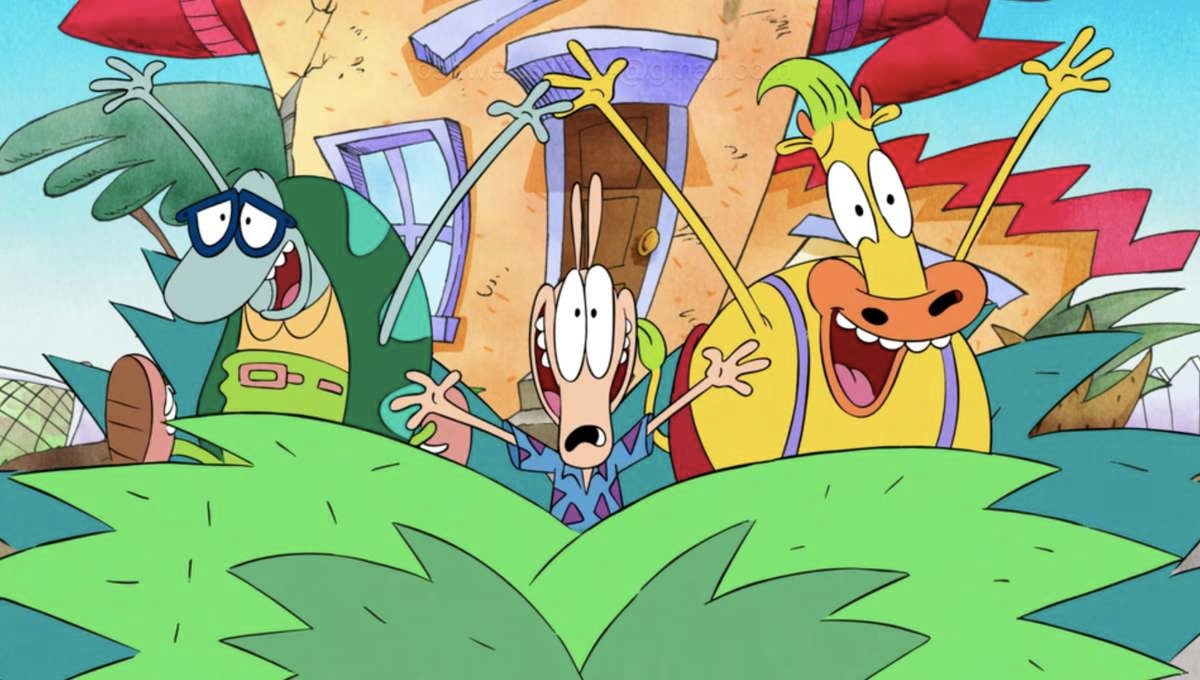 Considering this was the first and only game based on Rocko ever made, there’s no obvious other game to recommend. However, for long-time fans, I recommend watching the Static Cling movie on Netflix, which serves as a sequel to the series. It’s much better than this game.