Before yesterday, my character selection screen was the picture of perfect symmetry – a six-row rectangle featuring mustachioed plumbers, space-faring canines, and one question mark, but mostly just Fire Emblem characters. Now, the screen looks like this: 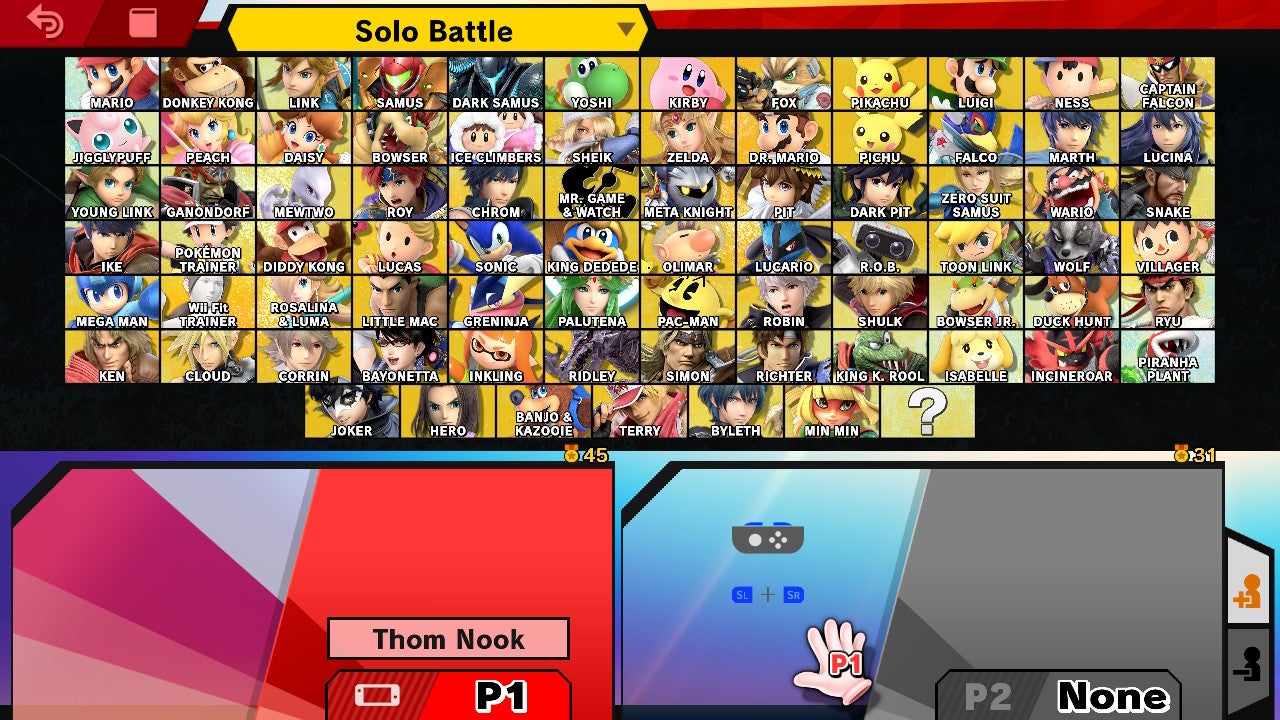 It’s a total affront to the style gods. This is no matter, though, because Min Min is worth committing blasphemy. To date, she’s one of the most fascinating fighters for Nintendo’s immensely popular party fighting game. Of all the DLC fighters, she certainly packs the most potential – and the strongest punch.

Min Min, a character from Nintendo’s other fighting game, Arms, brings the Smash Ultimate roster to a number so staggering you really don’t even need to keep count anymore. (Okay, it’s 81.) She’s the first new fighter included in Ultimate’s second Fighters Pass, an episodic-ish pack of downloadable content that introduces new characters, new stages, and new tunes every few months. The first pass gave players access to Byleth (Fire Emblem), Joker (Persona), Hero (Dragon Quest), Banjo-Kazooie (eponymous), and some guy with a ridiculous fashion sense (Fatal Fury). Currently, Min Min is the only confirmed fighter for the second pass, with five as-yet-unannounced characters on the way. £27 will get you the whole pass. Or you can buy each Challenger Pack – Nintendo nomenclature for individual downloads – piecemeal for £5.40.

Much like how she plays in her own game, Min Min has two extendable mechanical arms (“ARMS,” to use proper parlance), each fitted with various weaponry. Her left arm is always equipped with something called the Dragon – a vaguely reptilian fist that can fire off lasers. Her right arm can switch between three weapons: the Dragon; the Ramram, a circular projectile that can immolate enemies; and the Megawatt, a beastly contraption that can only be described as a wrecking ball charged by the power of 1,000 car batteries.

Min Min’s regular attack (the A button) controls her left arm. Her special attack (the B button) controls her right. By using a down-special, you can swap between the Dragon, the Ramram, and the Megawatt. Last week, in a video revealing Min Min, Smash creator Masahiro Sakurai showed off how you can control each arm simultaneously and independently. It’s a fascinating idea in theory. In practice, it’s not so easy to coordinate. I suspect it’ll take many hours of practice before I get a full grasp on how to juggle two arms doing two separate things in two separate directions. Maybe you’ll find it more intuitive.

Still, even without making full use of her potential, Min Min is a hurricane on the battlefield. She hits hard, moves fast, and takes no names. Her range puts the Belmont brothers to shame. By holding down her side-special, you can charge up whatever special weapon you’ve equipped. The longer you hold it, the further it’ll travel. It’ll also hit with exponential force. A fully charged Megawatt can send even the heaviest fighters flying from halfway across the stage. Min Min’s grab, too, puts her a cut above the rest. It’s about as long as other ranged grabs (sorry, Dark Samus), but a bit snappier, so you won’t feel quite as vulnerable if and when you miss your mark. Altogether, Min Min, while capable in any situation, excels at a distance.

There’s not much to write home about her Final Smash, ARMS Rush. Sure, it features a neat little cutscene. You’ll almost certainly K.O. anyone caught in its path. But the entire Final Smash mechanic remains a demonstration of spectacle over skill. No new DLC pack is going to change that. 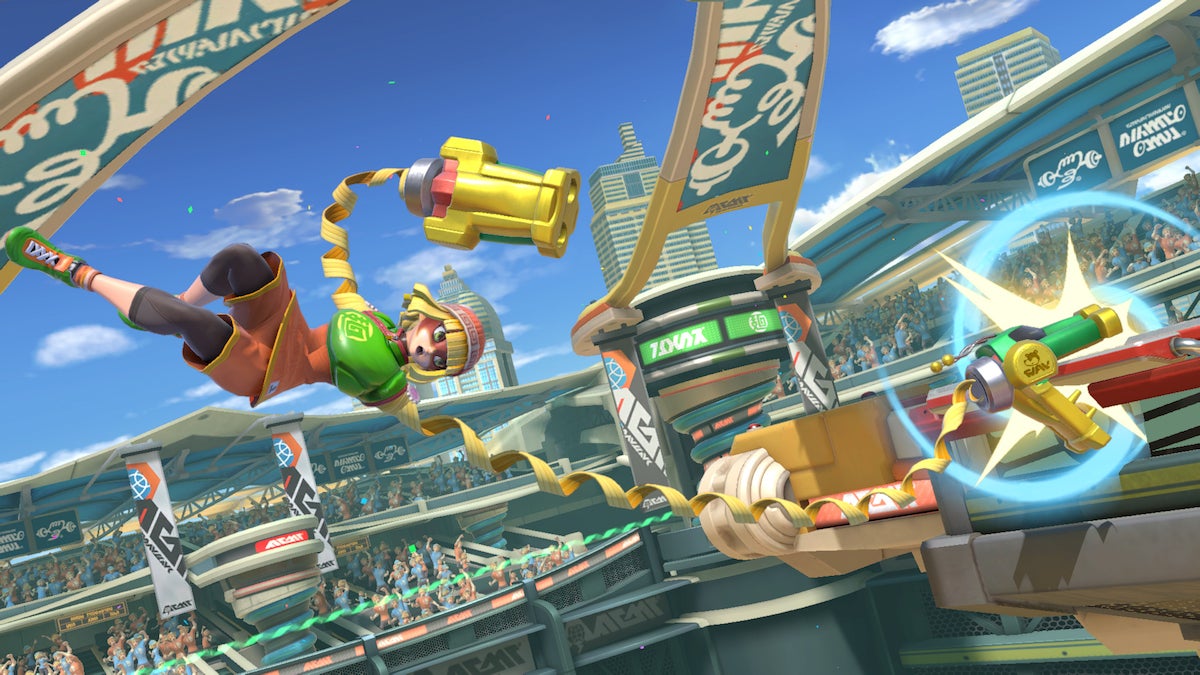 The true game-changer is her up-special, which can save Min Min from all but the hardest hits. For starters, it snaps automatically to the edge of the stage. It also has incredible range. On Final Destination, the only Smash stage, Min Min can regularly make it back to the stage from near the lower blast zone. Even from beneath the platform, it’ll still snap to the edge (within reason). You can also use it multiple times, so if you miss your first saving grace, you’ll get a second shot.

When you’re on the ground, it’s a different move, and will launch you straight up. Most potently, you can still perform attacks after using it. One fun combo involves using an up-special and directly following it up with an aerial down-attack. That’ll perform an angled dive kick at ferocious velocity. Just be sure not to do it too close to the edge; even the up-special won’t save you from that mistake.

If all of this sounds overpowered to you, well, it kind of is.

Last night, I plied my housemates with a six-pack and the fact that there’s a pandemic going on and, hey, guys, who wants to practise good social distancing by staying inside and messing around with this cool new Super Smash Bros. character? More often than not, whoever played as Min Min won handily. Min Min stopped a PK Thunder-charged Ness right in his tracks. She pummelled Wario’s knock-off Harley to oblivion (while it was reared). She sent Bowser flying off the edge at only 60 per cent damage. Mario’s cape couldn’t stop her ARMS. Neither could Zelda’s reflection move, Naryu’s Love. Truly, only the most formidable contender stood a chance: 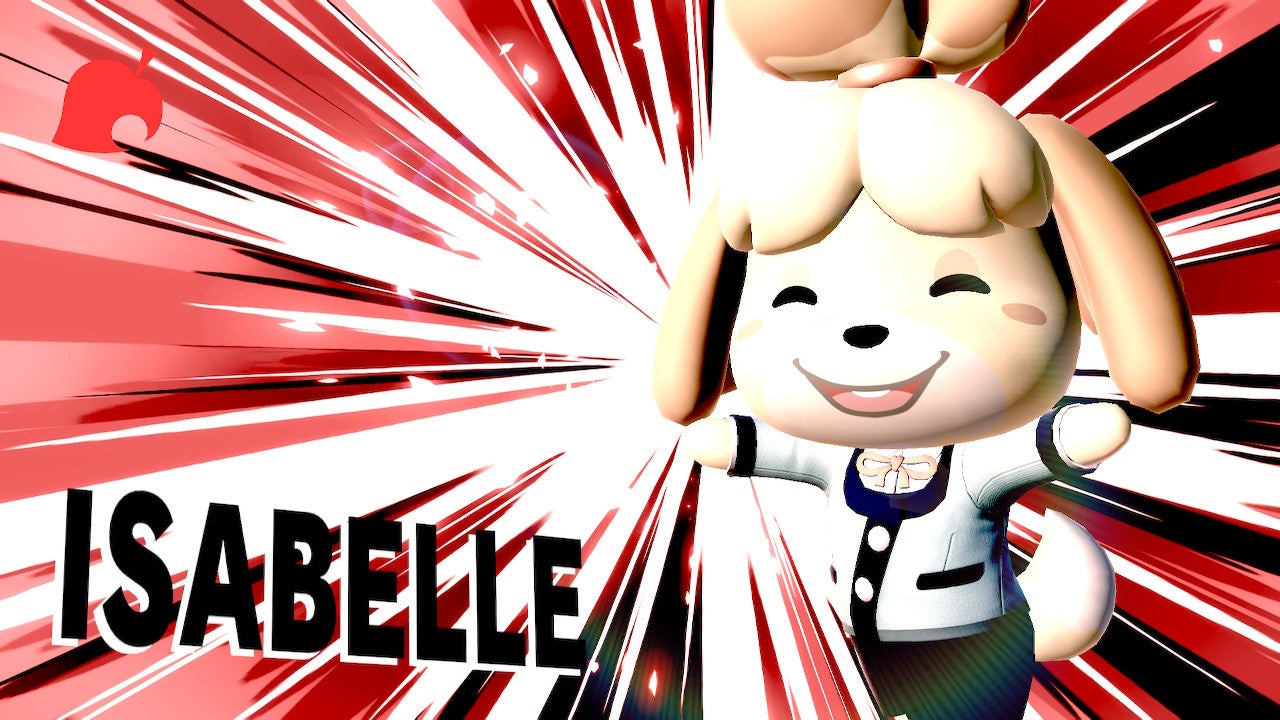 Playing against Min Min, as you can imagine, is a mostly futile exercise, though she has some weaknesses. When she extends her ARMS, she’s stuck in a standstill. Only the fists have hitboxes – the things that deem when characters actually connect in fighting games – so if you can dodge her attacks, you’ll have an unobstructed opportunity in which you can attack. Just keep in mind that her ARMS are not projectiles. Don’t try to eat them, Kirby.

Min Min’s Challenger Pack also introduces a new stage, Spring Stadium. It’s not Final Destination, so I’m not sure why you’d actively choose to play on it. Still, it’s a worthy addition to the demi-pantheon of Smash stages. On each side, there’s a launch pad. Combine this with Min Min’s truly jaw-dropping up-special to launch clear across the stage. There’s a ceiling at the top, too, that makes for some fun K.O.s. It seems almost needless, though. If you hit someone hard enough to bounce off the ceiling, they’ll likely careen directly into the lower blast zone, the way it’s angled. But if they’re travelling fast enough to ricochet in the first place, they would’ve just been K.O.ed in the upper blast zone. In other words, the coolest part of this stage does nothing, practically speaking, to distinguish itself from Final Destination.

All of this new content rolled out last night as part of Super Smash Bros. Ultimate’s 8.0.0 update. You can see the full patch notes here, but, as with many of the recent updates, don’t expect to find any paradigm-shifting changes. Falco, already a stellar fighter, was buffed to Super Saiyan levels. King Dedede, too. Other than that, the changes are mostly just a collection of tiny tweaks that only the most dedicated players will notice.