Harmonix's Fuser Is a Different Way to Mix Music And Gaming

Coming this autumn to PC, PS4, Switch, and Xbox One from Harmonix and NCSoft, Fuser is the ultimate freestyle DJ simulator. It casts the player as an up-and-coming disc jockey, gives them access to over 100 pop, rap, country, and rock songs, and drops them into spectacular arenas to play a music-mixing game of Simon Says with a crowd of thousands. I got to play a demo recently, and I’m already in love.

First players create a character, utilising a feature-rich editor with a wide variety of clothing, hairstyles, body types, and facial hair options. No option is gender-locked. In this musical fantasy, players can be whoever they want to be. Be all you want to be.

Customisation extends far beyond the avatar. Players can also customise all aspects of their stage performance. They customise the light show. There are three different projector effects. Want pyrotechnics? Sure, why not. Want corgis floating through the air? Done. They can even customise the toys played with by people in the crowd. 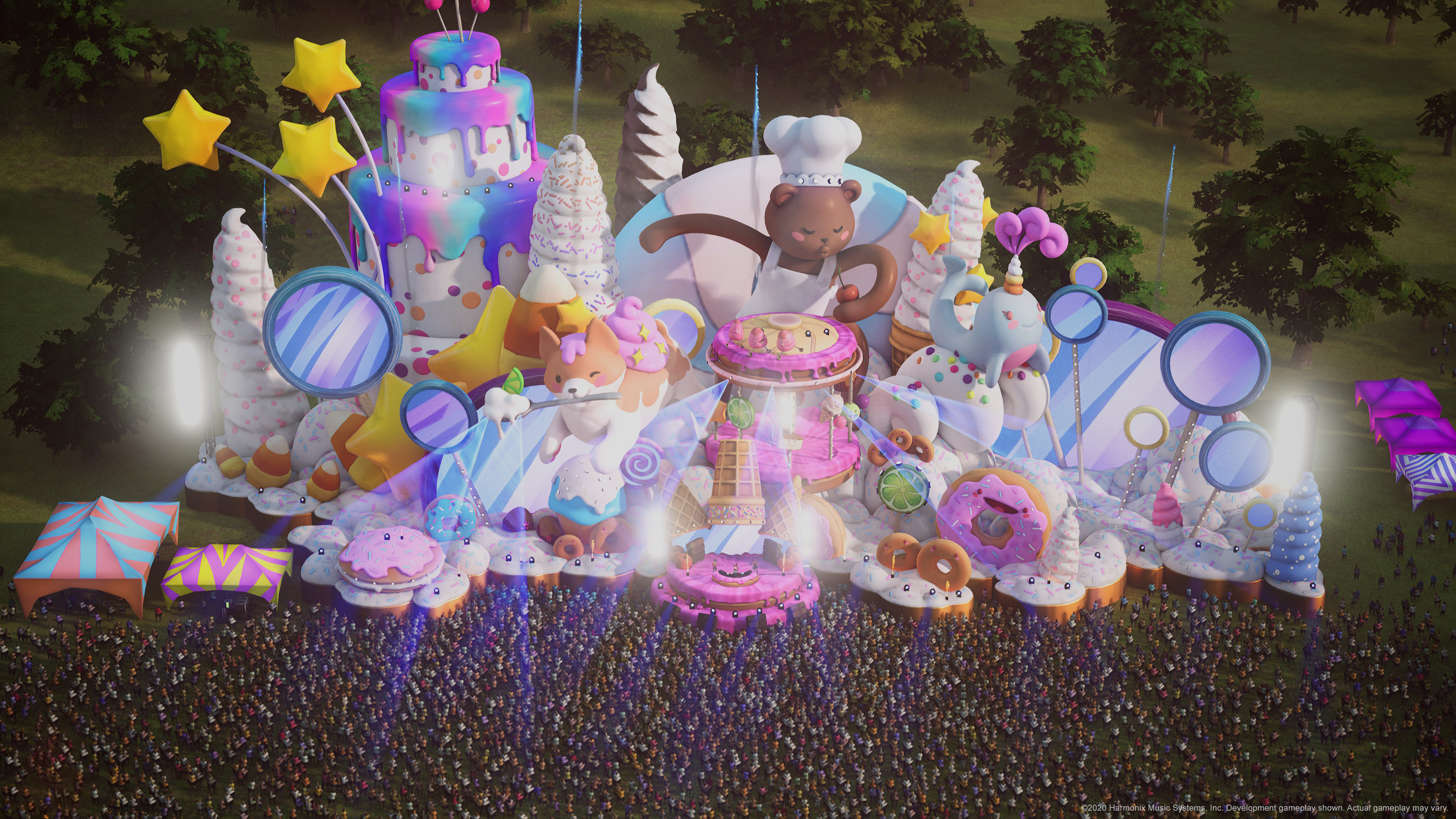 The game's arenas are intense.

Players bring a crate of music to each Fuser campaign mode stage, a selection of songs to use in their mix. Sometimes the selection is limited, challenging players to get creative. Other times players are free to fill their crate with all of their favourites. Armed with their avatar, stage dressing, and a box of music, the player then takes the stage, and their performance begins.

In Dropmix, the popular music-mixing card game collaboration between Harmonix and Hasbro, players have the freedom to mix and match songs as they see fit. In that game, which many consider the precursor to Fuser, there just isn’t enough structure. It’s too loose. There aren’t enough rules. Fuser’s campaign mode is all about following rules. Look at this screenshot. See the box in the middle of the right side of the screen? That’s where the rules pop up. As stages play out, the player is regularly challenged to use a certain number of songs, or songs from certain genres, or the synth, vocals, drums, or horns from a specific type of song. There’s freedom in that players have a wide variety of options when it comes to “play a pop disc” or “use two synth tracks.” But following the rules is key to racking up points and earning those stars.

While the official rules play on the right side, the crowd can also shout requests. See the text in the middle of that screen? That’s needy fans needing stuff. How they can be heard in these massive crowds is beyond me, but catering to their whims also increases the point total. 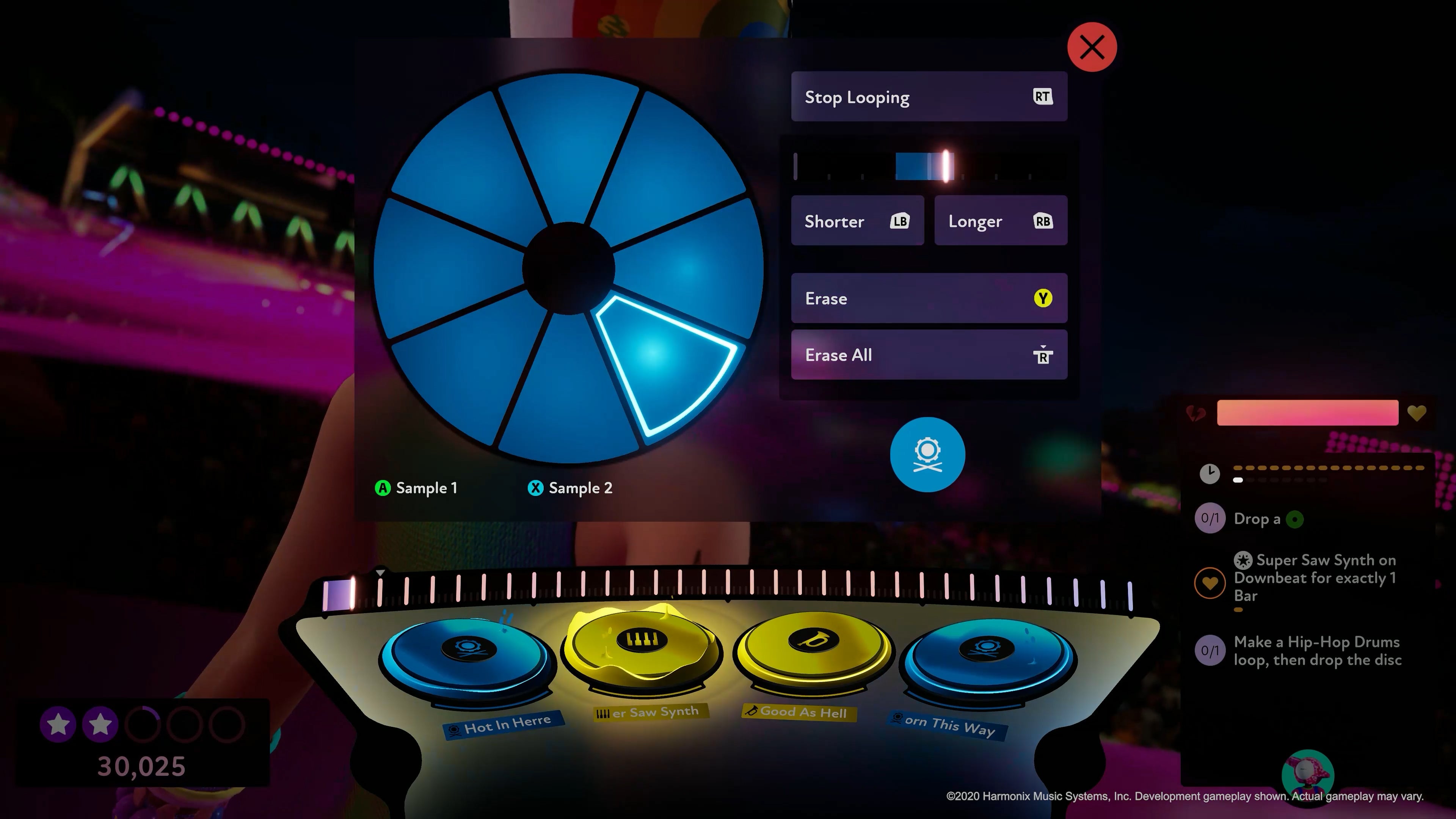 Adding to the complexity (and uniqueness) of the player’s mix is the ability to create custom loops. Why drop in the synth from “Call Me Maybe” when you can create your own loop using multiple samples on the fly? Because the synth from “Call Me Maybe” is awesome, but I’m sure your thing is good too. Players can also change tempo, switch from major to minor, or line up multiple songs on each of the four tracks and activate a smart transition that swaps out the whole thing.

It’s good stuff. The pressure to perform adds a layer of tension to the game that Dropmix never achieved. My biggest problem so far is my own indecision. The game’s like “drop a pop disc” and I’m like “oh my god I have so many.” It’s a wonderful balance of structure and freedom. It’s unlikely that any two players’ performances on the same stage will be the same.

Outside of campaign mode there’s a Freestyle mode where players can load up whichever songs they choose, pick their favourite venue, and go to town, as well as a multiplayer mode that’s similarly unshackled from limitations. Players will be able to create and share their own mixes online. I can’t wait to see what the community creates.

Fuser is now available for preorder, with early purchasers securing three exclusive songs: Dua Lipa’s “New Rules,” Khalid’s “Young Dumb & Broke,” and The Killers’ “Mr. Brightside”. A digital-only VIP edition will launch alongside the regular version of the game this autumn, which includes the first 25 DLC tracks along with a special stage effects video pack and cosmetic items. Check out the official website for more details.

It’s exciting stuff, especially for fans who’ve been following Harmonix’s efforts since the Frequency/Amplitude days. Fuser is something completely new to the music game genre. I can’t wait to mix more music together this autumn.