A new digital tool built to depixelise photos sounds scary and bad. Another way to remove privacy from the world. But this tool is also being used for a sillier and not terrible purpose: depixelising old game characters. The results are... never mind, this is also a terrible use of this tool.

“Face Depixeliser” is a tool Created by Alex Damian, Sachit Menon and Denis Malimonov. It does exactly what you expect with a name like that. Users can upload a pixellated photo of a face and the tool spits out what that person might look like based on algorithms and all that stuff. In the wrong hands, this type of tech can be used to do some bad shit and will make it harder to hide in this world from police and other powerful and dangerous groups.

But it can also be used to create monsters out of old game characters. Look what this thing did to Mario, for example.

Steve from Minecraft turns into a dude who doesn’t wear a mask because “It’s all a hoax, dude.”

These might be strange or even a bit monstrous, but things start getting much worse when you feed the tool images that don’t look like people at all. For example, this is what someone got after uploading an image of a Cacodemon from Doom. 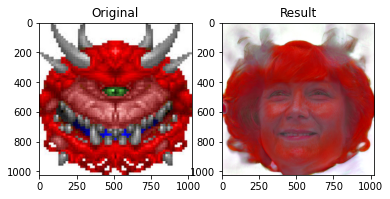 Poor Peppy turns into a demon from a horror film.

And the Creeper from Minecraft somehow becomes even scarier.

There’s a load more in this thread. There’s also a bunch of Tweets all about uploading Black people’s faces and learning that the tool isn’t great at dealing with them. Almost seems like you should have diverse teams working on tech projects so as to not overlook a small detail like an entire group of people. Though in this case, I’m fine with the creators messing up.

Maybe if people keep uploading video game images to tools like this we can eventually make them worthless.