Hardspace: Shipbreaker Would Be More Relaxing If Not For the Bone-Crushing Space Capitalism

A growing number of games focus on turning monotonous work, like running a border checkpoint or renovating a home, into compelling gameplay. Hardspace: Shipbreaker, the new simulation game from Homeworld 3 developer Blackbird Interactive, fits that description perfectly. It tasks you with stripping spaceships under the constant guise of a megacorporation that sees the main character as a mere tool for amassing profit, rather than an actual human being. Sound familiar?

Hardspace: Shipbreaker seals you inside the pressurised space suit of a nameless Cutter, the natural evolution of a salvage yard dismantler in a futuristic civilisation that has perfected space travel. LYNX Corporation has sponsored your employment to the tune of 999,999,999 credits, which you must pay off by reducing a constant string of spaceships to their base components for processing. Life is now a repetitive cycle in which the LYNX facility is your entire world.

This is by design, of course. LYNX has established a company town of one where you’re constantly chasing a debt that seems insurmountable. After every mission in Hardspace: Shipbreaker, you’re presented with a receipt that lists both your earnings for the day as well as what your employer’s billing you for stuff like renting the bay in which you work, and maintaining your habitation unit. The megacorporation will also charge you for oxygen and, should you die, a massive fee to clone your body. Although you might salvage hundreds of thousands of credits for LYNX on any given day, the amount subtracted from your debt will be significantly less.

In addition to the spacesuit and thrusters that help you manoeuvre in the zero-g environment, you’re equipped with a cutter to separate salvageable parts from the rest of the spaceship and a grapple beam to move them around afterwards. Certain resources need to be sent to a processing unit, some destroyed in a nearby furnace, and still others transported to your barge for profit. Once you pass the opening tutorial, you’ll receive tethers that can drag scrap to the appropriate receptacle automatically. Tethers are super useful, so much so that smart usage can mean the difference between completing the day’s tasks within a single 15-minute shift and having to carry them over to the next, racking up further debt to LYNX.

Although many spaceship parts will net credits, the main goal with each salvage is reaching the reactor. This unassuming metallic cube brings in huge profits if you can safely send it to your barge. As soon as you extract the reactor from its starship it’ll begin to melt down. Should you wish to live, keeping it at a safe distance from yourself is tantamount. In many situations, the best move is to dismantle as much of the spaceship as possible in order to give yourself a straight shot to the barge as soon as you start messing with the reactor. 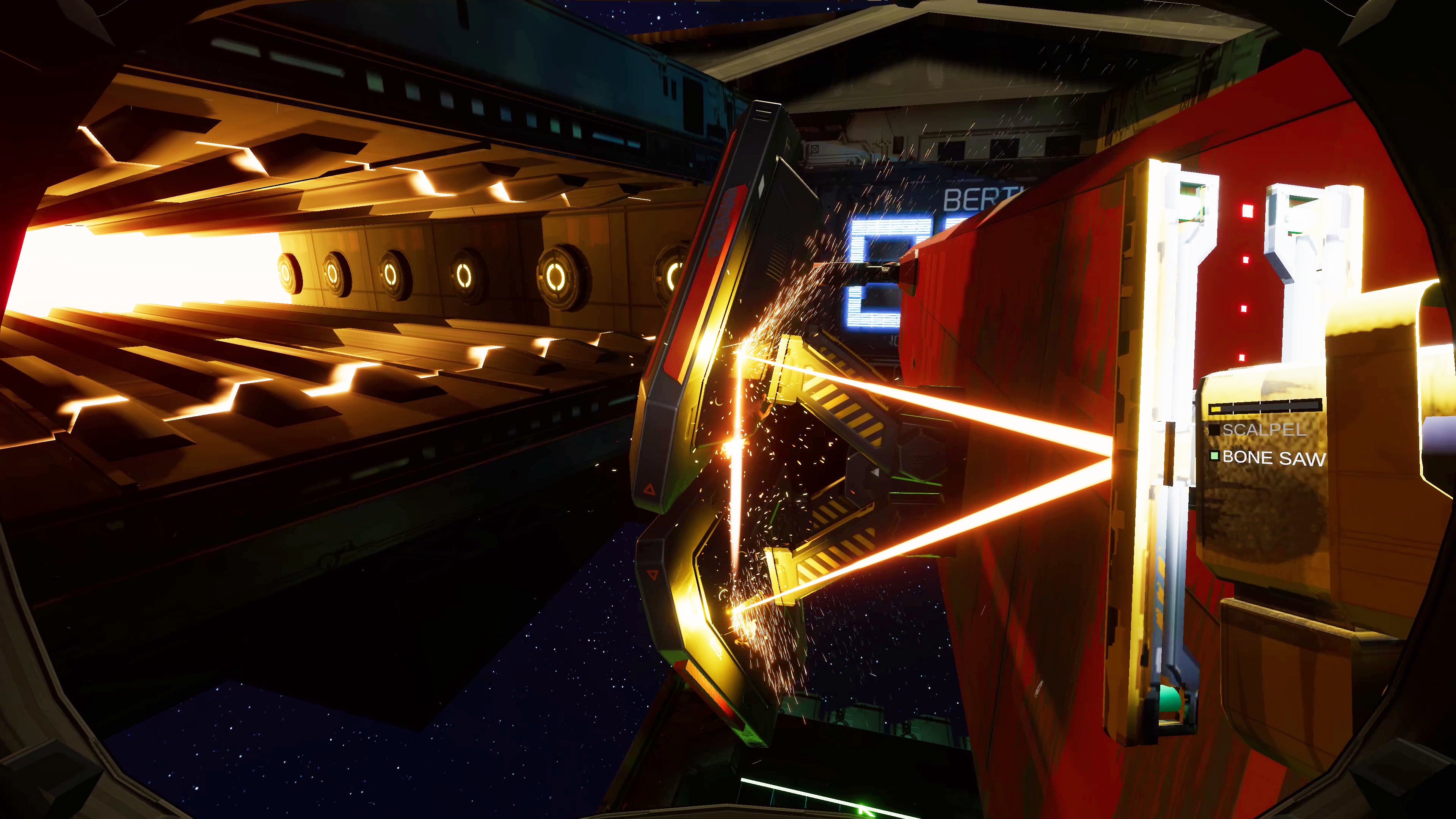 Fortunately, I’m finding the work largely fulfilling even with its inherent danger. There’s a strange sort of meditation to zapping connectors with your cutter and dragging large sheets of metal to the processor. Movement is difficult and unwieldy at first, but techniques like using your grapple beam to reel yourself toward stationary objects makes zooming around the salvage bay a cinch once you get the hang of it. The satisfaction of dismantling a spaceship piece by piece and seeing the tangible progress right in front of you, however, more than makes up for any frustration your weightlessness might elicit.

The world of Hardspace: Shipbreaker is a very possible future, made all the more likely by our continued slide into the covid-19 sinkhole. The rich will inevitably get richer and influence politics with their ill-gotten wealth. Corporations can freely mistreat the workers who enable their massive profits because there’s always someone else desperate enough to replace them. Facebook and Amazon have turned major American cities into their own private fiefdoms, with campuses that provide everything employees might need, so that they remain stuck in a perpetual cycle of labour and gratitude to the billionaires who own them. Meanwhile, Elon Musk is on a mission to privatise space travel, raking in lucrative government contracts to lock the poor out of the next stage of human development.

It’s not hard to imagine my children and grandchildren slaving away on a space barge somewhere to pay off a massive debt to whatever megacorporation ends up ruling that sector of the atmosphere. How could it end any other way? I only hope they find as much fulfilment ripping antennae and fuel canisters off decommissioned spaceships as I did in Hardspace: Shipbreaker. I wonder what kinds of video games they’ll play during their few hours of downtime as they slurp nutrient paste and worry about affording an oxygen refill for their next shift.