Xenoblade Chronicles: Definitive Edition, out today for Nintendo Switch, re-re-introduces players to Shulk and his ragtag group of world-savers. It’s one meaty role-playing game, full of plenty to do and plenty to learn. For a quick introduction, watch the video above. Or read on for a deeper dive into the game’s various and intricate systems. 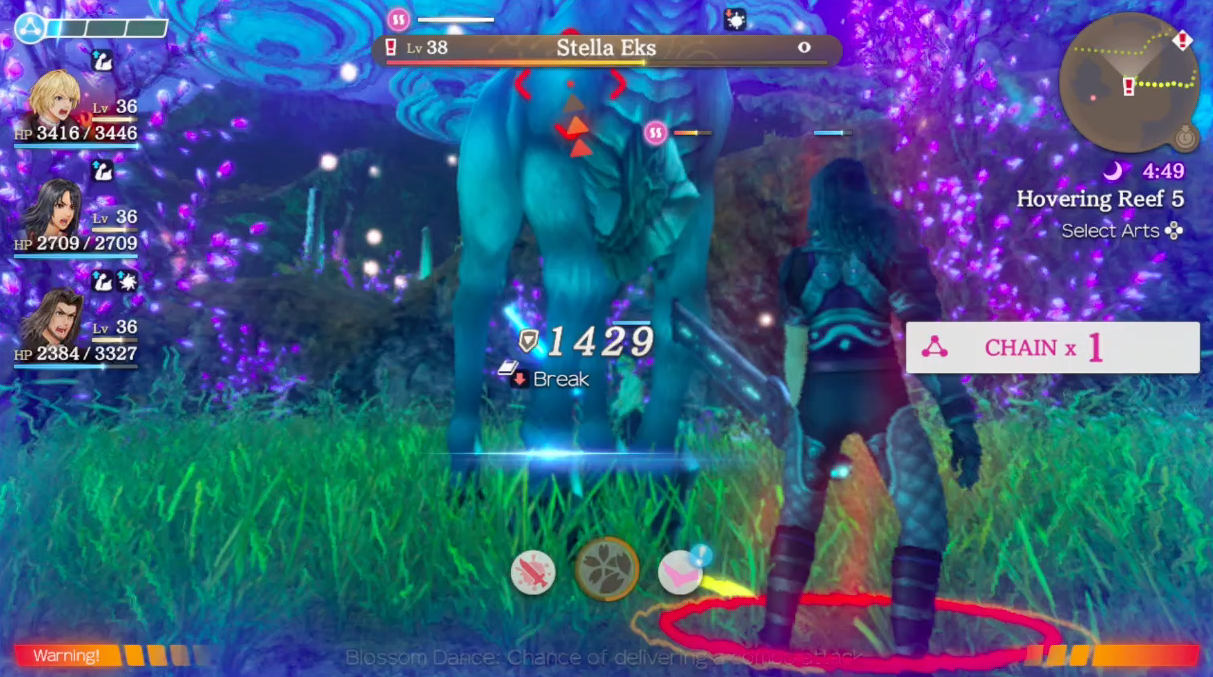 It may look complex, but the combat system in Xenoblade Chronicles is deceptively simple. Thing is, it takes hours to get a solid grasp on it. We offered some deep combat advice earlier in the week while breaking down the game’s ridiculously busy battle HUD, but these tips should help you get a jump-start.

Use Arts based on colour.

Arts in Xenoblade Chronicles are helpfully colour-coded. Red Arts are physical attacks: punches, sword strikes, things like that. Blue Arts are Ether-based attacks, which would be called spells in any other game. Purple Arts are also Ether-based, but have the bonus of imparting debuffs on your foes. Orange Arts create Auras, powerful buffs for your characters or your team.

The other three colours are a bit more confusing, but they form the strategic bedrock of Xenoblade Chronicles. Pink Arts are Break Arts, and they cause your target to suffer the Break debuff. An enemy suffering Break is susceptible to the Topple debuff, which knocks them to the ground for a few seconds, momentarily defanging them. You can inflict Topple with green Arts, or Topple Arts. Once an enemy is Toppled, it’s only a matter of hitting them with a Daze Art, which are the gross yellowish ones. That will prevent an enemy’s aggro from increasing, so your high-attack, low-HP characters (‘sup, Dunban) can move in with little risk.

By matching colours in Chain Attacks, you’ll amp up their power. Use three Red Arts, and you’ll dish out some serious damage. Use all Blue Arts, and your spells will be stronger. You’ll also heal more. But there’s another colour-matching strategy you can and should use. When you trigger a Chain Attack, you have the perfect chance to Break, Topple, and Daze an enemy in one quick motion.

Use Chain Attacks to heal.

Chain Attacks can dish out some serious damage, but they can also save your neck. Sharla, your party’s most effective healer, doesn’t always use her Healing Arts when they’re ready. By triggering a Chain Attack, you can direct her to use any of her moves, since cooldowns don’t matter in Chain Attacks. Your best is Heal Round, which heals your entire party. Level it up enough and you can easily recoup more than 50 per cent of a lost HP bar – for each party member.

Even if they’re not in your party, all of the characters travelling with you will receive the same amount of EXP, AP, and SP earned from defeating enemies. So there’s no real pressure when it comes to switching things up.

Now, this may sound controversial, but there is some merit in sticking with just three characters. As your characters fight together, they’ll build up affinity bonds. (These bonds don’t increase between in-party characters and out-of-party characters.) Building up affinity between characters can help a lot when it comes to crafting Gems, various enchantments that can improve your gear. If the affinity between two characters is high enough, the Gems you craft will be more powerful. A strong affinity bond can also help you out in combat. The stronger the bond, the higher the chance you’ll trigger a Chain Link, adding an extra move to the end of powerful Chain Attacks. Theoretically, if your affinity is high enough, you can tack on up to 15 extra attacks.

Affinity builds in various ways. The quickest and easiest way is to simply fight with the same party members. By sticking with the same three characters you’ll build up bonds between them faster than you would by repeatedly switching things up.

Plus, who’d want to switch out Shulk? He’s got the Monado! 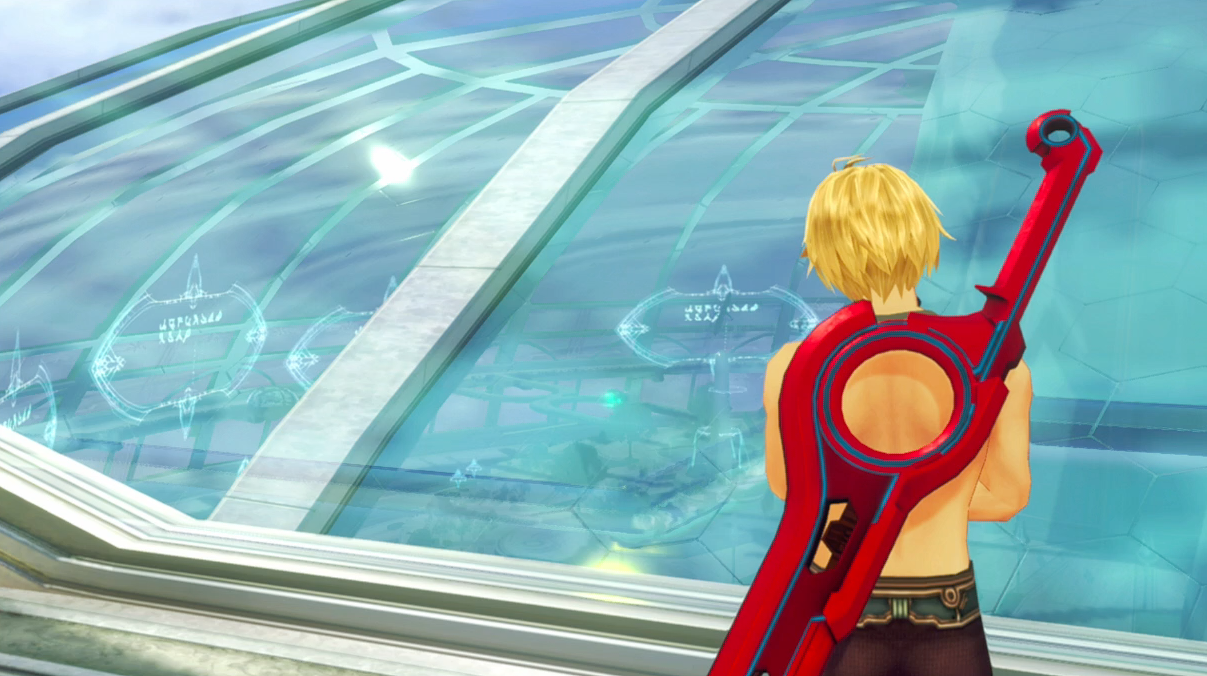 There’s no shortage of things to do in Xenoblade Chronicles, but it’s all too easy to walk right by the good stuff in this breathtaking world. The following advice should set you on the right path.

Don’t sleep on the Collectopedia.

See, the Collectopedia doesn’t automatically index your finds. Instead, you have to “donate” items. So if you want to register that you’ve found a Pure Cherry in Makna Forest, and you only have one Pure Cherry in your inventory, that’s a calculation you’ll have to make. Will this Pure Cherry come in handy later on? Is it a requisite for a future side-quest?

Donating items to the Collectopedia will go toward completing a specific category for an area. (The Pure Cherry falls under Makna Forest’s “fruit” category, for instance.) For every category you fill out, you’ll get a gem. Fill out all of the categories for a given area and you’ll get a piece of gear. That beats the stuffing out of most side-quest rewards.

You can change the time of day.

There’s a day-and-night cycle in Xenoblade Chronicles, and certain tasks are tied to specific times of day. Now, you could wait around for the in-game clock to do its thing. (One minute of real time equals one hour of Bionis time.) Or, you can open up the menu and go to “Change Time.”

Some quest-specific enemies, like the Aqua Nebula, only show up during rainstorms. If it’s a bright and sunny day in the Gaur Plains, you can fiddle with the time-changing function until your desired weather pattern – rain, thunder, whatever – shows up. Moving the clock ahead in two- or three-hour intervals seems to reap best results.

It’s not always easy to jump off of tall stuff, but if you do, you’re in for a world of hurt. There isn’t an exact ratio for how much damage you’ll take vis a vis how far you fall. After much testing (sorry, Shulk!), I think I’ve factored something out: Every time your Joy-Con rumbles, you’ll lose a third of your health. If it rumbles four times or more in one fall, you’re done for – unless you land in water.

You don’t have to commit to one skill tree.

As you defeat monsters and Mechon, you’ll gain SP, which go toward levelling up a character’s skills. Open up their skill tree and select one of their three basic traits. (For Shulk, the options are “Humanity,” “Integrity,” and “Intuition.” This might surprise you, but “Fighting For Friends and Being Just A Generally Good Guy” isn’t an option.) SP will automatically start allocating toward the five skills in that tree. It can get a little confusing, but once you’ve unlocked a skill, you needn’t stick with that basic trait. You can switch to a different trait and still equip any unlocked skills from other traits.

Hold on to your materials.

It can be tempting, especially in the early goings, to sell off all your materials for quick cash. You should hold off, and only sell superfluous goods. Don’t worry about money. Completing even the barest amount of side-quests will leave you plenty flush in short order. What’s worse is stumbling upon the rare important side-quest, seeing that it requires a Light Rain Element, realising that you sold off your one Light Rain Element for a pittance, Googling around to see where you can find a Light Rain Element, learning that it’s only dropped by Aqua Nebulae, heading back to Gaur Plain, noticing with delight that it’s sunny, and figuring out with sadness that Aqua Nebulae only spawn during rainstorms.

Get a grip on the side-quests.

Look. There are a lot of side-quests in this game. Even if you’re the most die-hard completionist, you’ll drive yourself nuts trying to knock them all out. (The number that’s most often thrown around is 400.) You could try it. Or you could read our guide on parsing through the madness:

Xenoblade Chronicles: Definitive Edition may look intimidating, what with its intricate systems, complicated HUD, and jaw-dropping hour count. But this is a forgiving game to its core. If (and when) your team gets wiped, you won’t lose any gold or gear. You won’t suffer a hit to your EXP or level. You’ll just respawn at the nearest landmark. So go have fun, and don’t sweat it too much.