Minecraft Dungeons Is a Fun But Stripped-Down Dungeon Brawler

I’ve spent a few hours clicking through Minecraft Dungeons’ isometric world and, despite how shallow it feels, I’d be content to click through it for several more. Mojang’s attempt to spin its massively popular crafting game into a small Diablo-like is successful, limited only by the narrow ambitions underlying it.

Minecraft Dungeons, out May 26 on Xbox One, PS4, Switch, and PC (where I’ve been playing it), takes Minecraft’s characters and blocky aesthetic and maps it onto an isometric dungeon crawler where you mash cooldown abilities while running through mob-infested forests, swamps, and volcanic caves. The story sees you save a village from malevolent forces, but really the goal is to kill lots of stuff, get stronger loot, and then kill even more stuff. That’s what the game seemed like when it was revealed. It’s the sense I got while playing the beta. It’s a feeling playing the finished game has only reinforced: Minecraft Dungeons is exactly what it says on the box.

Minecraft Dungeons’ role-playing elements are completely gear-based, with your character’s stats and appearance tied to the loot you find and equip. These abilities reset after a cooldown, which means you can use them as you please without worrying about hoarding mana points or potions for a boss fight. One moment I’m a brawny barbarian in a wolf skin; the next I’m a mage slashing at mobs with a long spear and collecting their souls to power my book of magic attacks. It’s liberating to change things as I go, and it’s perfectly suited to each level’s procedurally generated maps and arcadey brawls, even if most levels feel like corridors with only a few short detours.

It’s also a system predicated on a lot of randomness. You can craft fun and unique builds, but only based on the gear you happen to loot from enemies or get from the chests earned after each level. You can spend the gems you earn on additional chests, but there’s no good way to craft specific builds besides just going out and grinding.

Minecraft Dungeons facilitates this by encouraging you to replay levels on higher difficulties. The procedurally generated parts, like where a big mob fight happens and what it consists of, help stave off a sense of rote repetition. Co-op also helps in this regard, especially since the number and strength of enemies you face when the difficulty is ramped up are no joke. I’ve played a couple levels with local co-op, and it’s clear this is where the game truly shines, with players able to use the unique builds they’ve created to make up for one another’s weaknesses. It’s a shame there’s no automatic matchmaking to make it easier to play with others online. 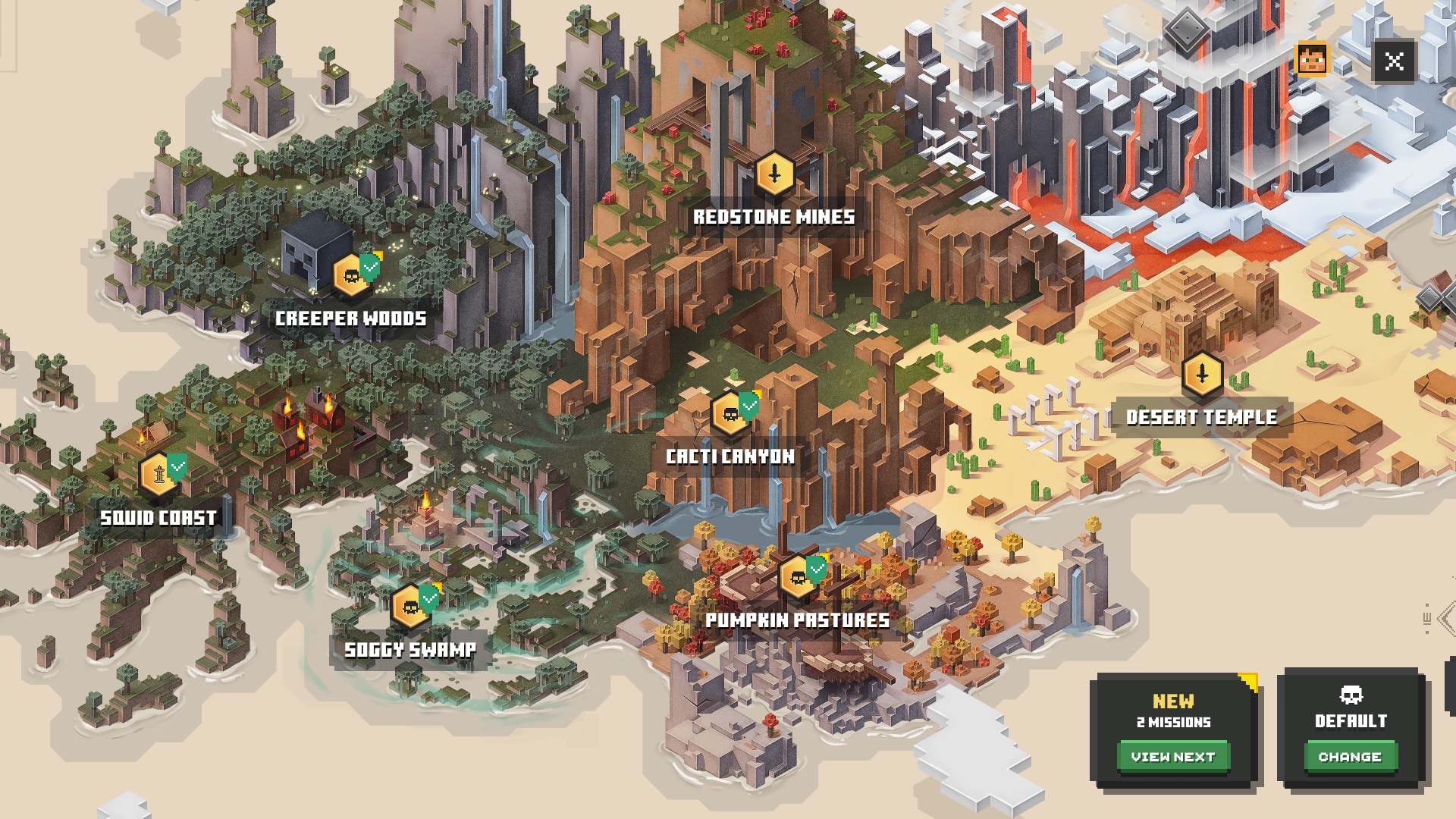 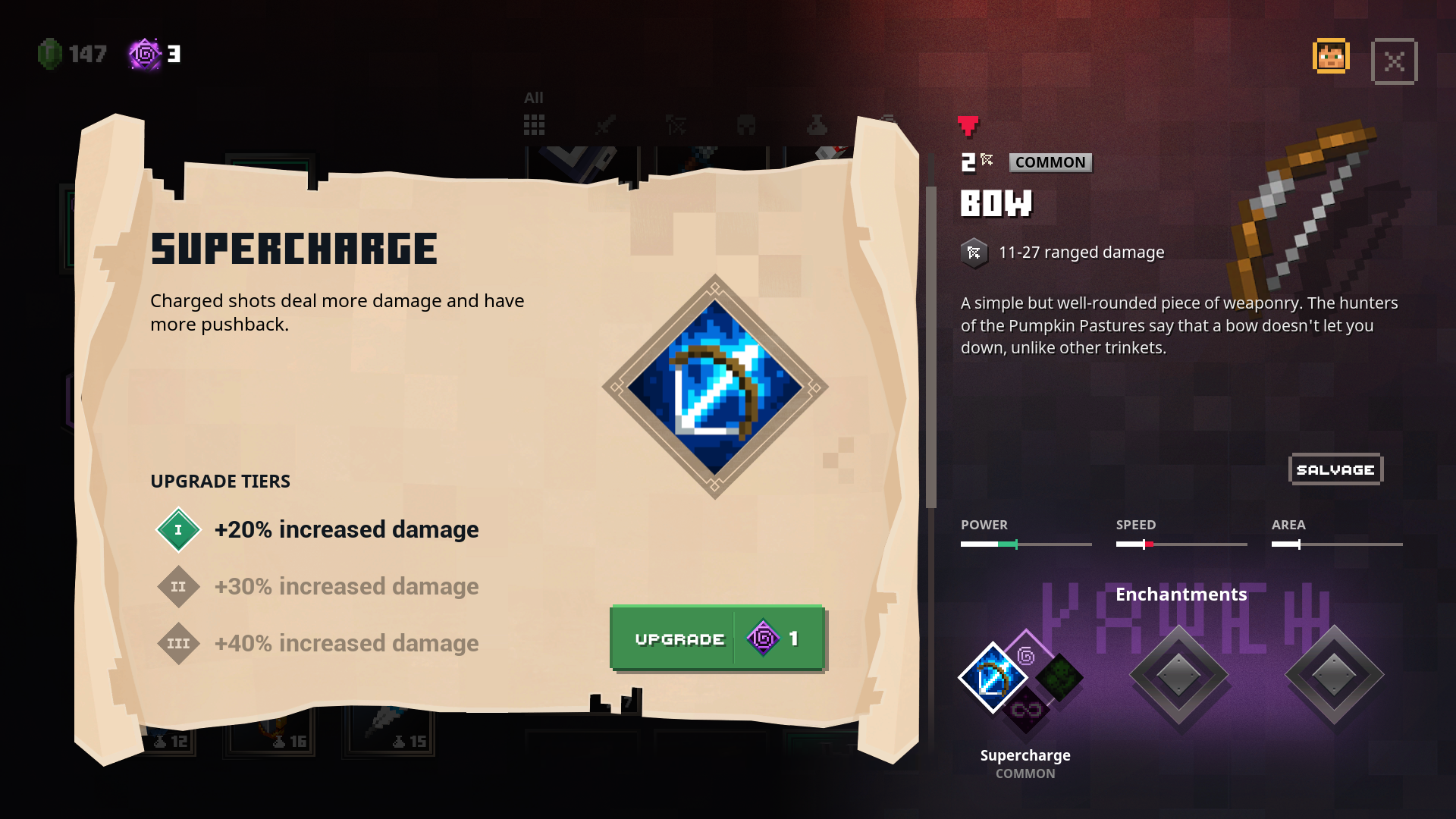 The whole experience is a lot like eating a bag of crisps. The pop, pop, pop of mowing down enemies with a barrage of arrows or sword slashes are just satisfying enough to feel worthwhile and yet still make you feel like you could use a few more. “Look, some green blob’s behind that tree over there,” I’ll think, itching to divert from the game’s well-worn linear paths for a second or two just so I can watch it bite the dust after a few clicks.

But you know how when you open a new bag of crisps there’s also that instant where you realise half the bag is just air? Minecraft Dungeons has that too. It’s a great pre-breakfast or afternoon snack, but less of a meal in itself. The game’s due to get story DLC in the future, as well as cross-play and cross-progression between each of its platforms. It’s also easy to see how new items could keep being added to the game to give players new and unusual character builds to chase. But for now, it’s enough that Minecraft Dungeons is a chill, fun romp through a bunch of pretty video game levels.