How To Have The Best Time Playing Super Mario Party

Mario Party games go poorly when tempers run hot. One minute, you’re about to finally (finally!) grab a star. The next, one of your so-called “friends” uses a Golden Pipe and snatches it from your grasp. Or maybe you’re stuck in a rut of poor mini-game performance. Coming dead last in a dozen mini-games in a row can cause one’s psyche to slowly unravel. Maybe you’ve heard the joke that this game is a friendship destroyer.

But the truth, as millions of players will tell you, is that Mario Party games are far from friendship destroyers. In fact, 2018’s Super Mario Party on Switch is just about the most fun you can have with a party game, so long as you do it right. It’s particularly ideal to play in this moment.

Because of that, we’ve got some tips for you for getting the most out of the game.

The conceit of Mario Party‘s standard mode is simple. You roll a die. You move that amount of spaces around a game board. Your goal is to land on the spot with the star, which you can then nab for yourself by forking over coins. Whoever has the most stars at the end wins. While there are quirks – warp pipes, game-shifting items, and the like – on each board, the standard mode doesn’t require much more strategy than a round of Candy Land. Most of the actionable gameplay, such as it is, exists in the minigames you’re forced to play at the end of every turn. Don’t play standard mode.

Party Mode, on the other hand, calls for some heavy thinking (at least in Mario Party terms). Folks, do not sleep on Party Mode.

Here’s how it works: Four players, split into two teams of two, jump into remixed versions of the Super Mario Party’s game board. Rather than traditional boards, these boards don’t have straightforward paths. They’re wide, open-ended spaces in which you have full control over your movement. Your goal remains the same: Getting the most stars. But accomplishing that requires both tactical thinking and solid communication.

Mini-game outcomes are also shared between teammates. Despite Party Mode’s team-oriented nature, you won’t just play team-oriented mini-games. Free-for-all games appear, too, with the spoils going to the victor’s team. If you’re playing, say, Slaparazzi – an all-out melee in which players slap each other in order to score some room in front of a Koopa’s DSLR – Wario could come in first, Diddy in last, and the team would still receive a ten-coin bonus.

Succeeding in Party Mode requires more than mini-game superiority. You’ll need to talk to your teammate about plans. You might need to coordinate dice that compliment each other from the jump. In free-for-all mini-games, you might have to sacrifice yourself to let your teammate take home the gold. All told, it adds an interesting wrinkle of complexity to an otherwise not terribly complex game.

But most of all, Party Mode bonds you to your teammate. Their anguish is your anguish. Their joy is your joy. Far from a friendship destroyer, this mode is a friendship forger – well, at least between teammates. The other team can screw off.

The best part of any Mario Party game, Super Mario Party included and especially, is the library of mini-games. Once you’ve played through the four game boards a few times, it’s a good bet that you’ll have all 80 unlocked. In other words, you can skip straight to the good stuff.

Sure, some mini-games – like Tall Order, Barrelling Along, and all of the rhythm-based ones – stink. But most of them are a blast. So filter out the ones you can’t stand by creating a list of favourites. 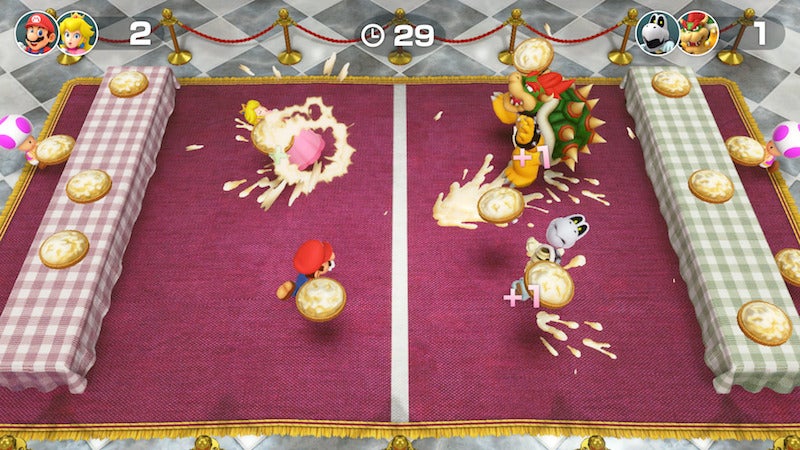 Pie Hard (with a vengeance)

To curate your list, go to the mini-game screen and save any game you like to your favourites list by tapping the left button (or B, if you’re using a right-hand Joy-Con). From there, just tap SL to see a full list of your saved favourites. Select “random” to start playing from a shuffled deck. For two-v.-two games and three-v.-one games, playing on random shakes up the teams with each game, so no one gets stuck on a consistently losing (or winning) side.

Of course, this is Mario Party, so there’s a zero percent chance everyone playing will handily agree on which mini-games should and should not be included. So come up with an equitable system where everyone gets a say. Maybe that means all players get to veto one personally disliked mini-game (Tall Order). Maybe they get to choose a beloved one that’s safe from any vetoes (Rumble Fishing). Or maybe they can put aside differences and all agree that Tall Order belongs on any list of favourites. However you approach it, take care to make it fair. If someone feels slighted while playing Mario Party without actually playing Mario Party, you’ve accomplished an impressive feat – and not an admirable one.

Free Play is the easiest way to play mini-games, but you can add a meta-game by playing in Square Off. In that mode, players are presented with a game board of 16 panels. Win a mini-game, and you’re able to claim a panel. Whoever claims the most panels in the end wins.

Don’t bother with Mariothon, a glorified best-of-five mode. Grinding gameplay to a temporary halt every five mini-games is no fun.

If someone’s actually agreeing to play Super Mario Party with you, be grateful. Respect their time. There’s no need to condemn Super Mario Party naysayers to two hours of torture (the forecast timespan for 20 turns). You can set the turn limit for the bonus fourth stage, Kamek’s Tantalising Tower, up to 30 turns, which takes a staggering 180 minutes to complete. No way! Set the limit for 10 turns on a standard course, or 15 if you’re playing Kamek’s, which is a bit tighter than the other three and tends to move faster. If your co-players have fun with a shorter game, they might surprise you by doing the unthinkable and asking to play again.