Bethesda laid out its plans for the future of Fallout 76 in a new roadmap today, shifting the game to a seasonal model with new storylines and battle passes coming every few months. They’re also promising the arrival of the military order the Brotherhood of Steel.

Bethesda’s new approach will bring an account-wide progression system with rewards unique to each of the new seasons. “This is our own take on a ‘Season Pass’ style system designed specifically for Fallout 76,” the company wrote in a blog post today. It’s effectively a new meta-progression over the existing level grind, which will be a boon to existing players who have run out of goals to work towards as well as those just starting out who can now get extra rewards for their efforts. 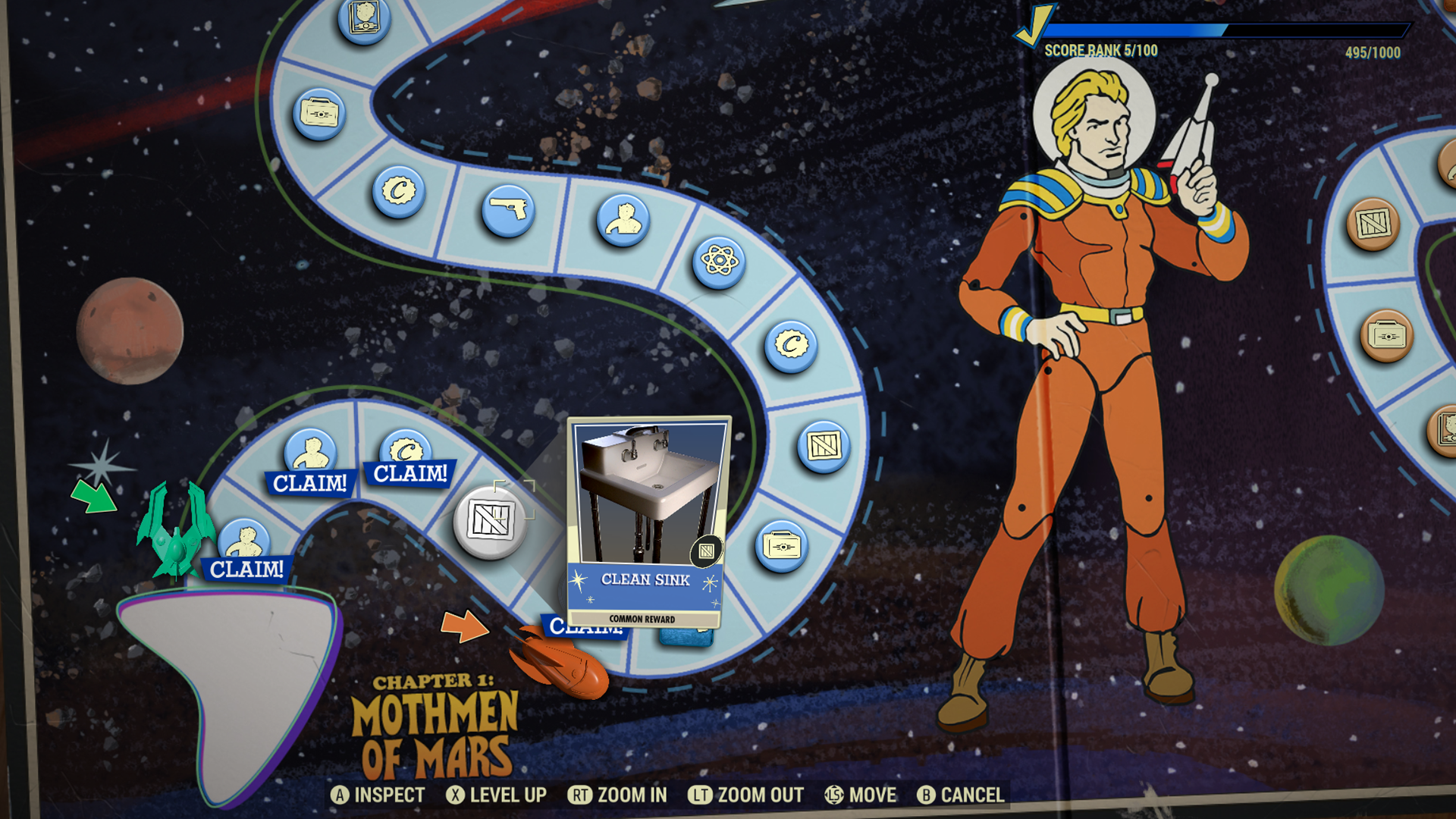 It’s part of Bethesda’s ongoing effort to improve a game that was poorly received from the moment it was announced. Fans of the earlier games were sceptical once they learned Fallout 76 would be online, and its bungled launch, full of bugs and features that didn’t quite match the hype of its E3 2018 unveiling, only solidified that negative perception.

Laid out like a board game a la Candy Land, this new Fallout 76 season pass will have you rank from 1 to 100 by earning S.C.O.R.E. points through completing various in-game activities or spending money (about £1.20 per rank). Each new rank will net you unique cosmetics and gear for your camp, as well as a range of consumables, in-game currencies, and even Perk Card Packs to customise your character builds further. According to Bethesda the first season pass this summer will be free, but it’s unclear if the ones after that will be as well.

This new S.C.O.R.E. system is meant to replace the game’s existing challenge system which nets players Atoms. Instead, new daily and weekly S.C.O.R.E. challenges will be geared around ranking up the season pass through things like completing public events and killing legendary creatures. Players will still be able to earn Atoms from lifetime challenges, but Bethesda admits that “there are fewer Atoms overall up for grabs in this new system.” The trade-off is that instead of needing to spend Atoms to buy new cosmetics and items, more of this stuff will be unlockable through the season pass progression. 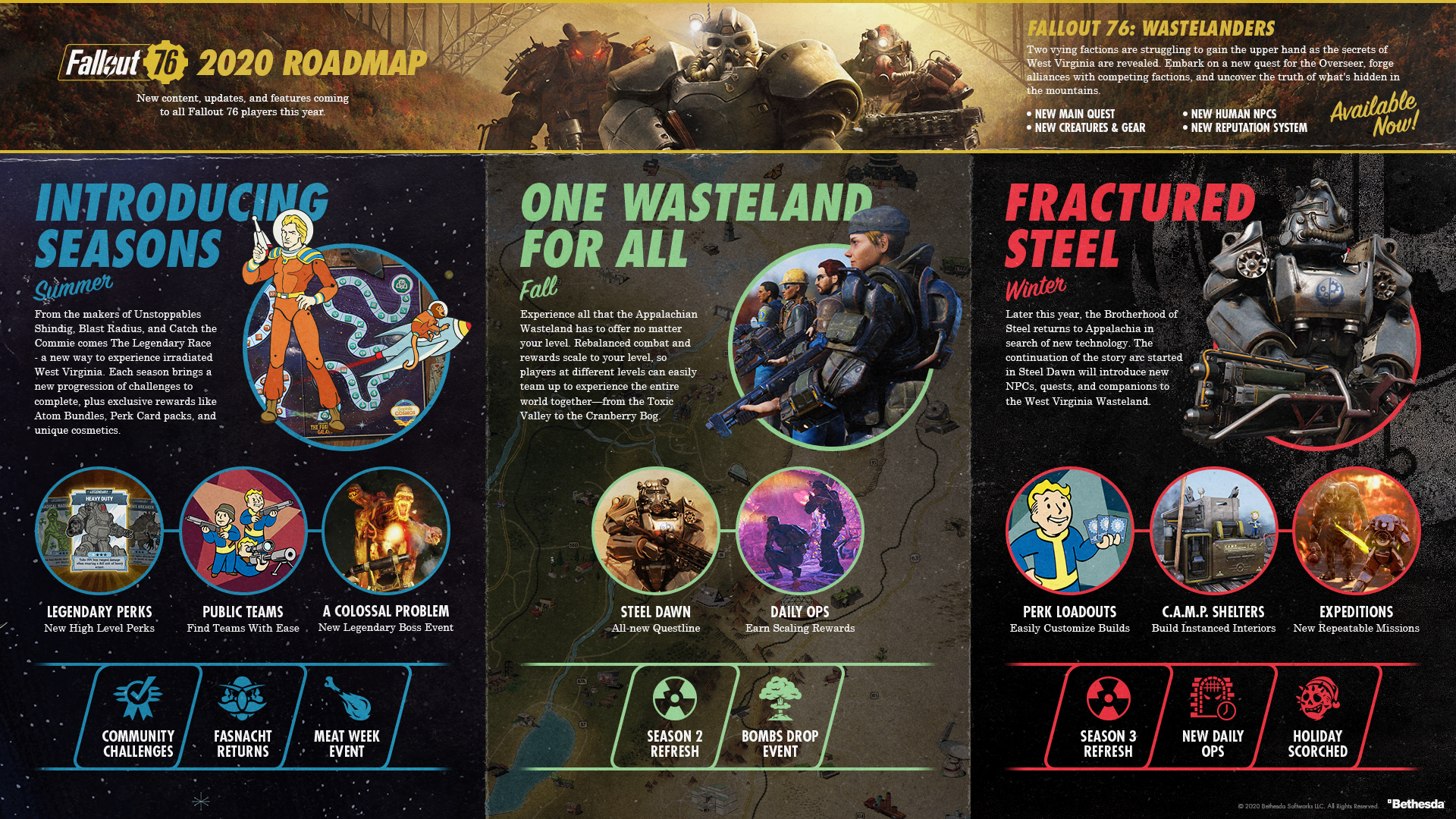 The publisher said it plans to run four seasons a year, with each lasting around 10 weeks followed by a small break before the next one starts. Here’s what to expect based on the seasonal roadmap for the rest of this year:

From the looks of it Fallout 76 will be getting plenty of new content and game mechanics in its second year and beyond. I was disappointed in a lot of what got added in this spring’s massive Wastelanders update, but the game is far from dead and it’s clear Bethesda has big plans for it. I’m more sceptical of the new seasonal passes. While Fallout 76’s has been in need of a deeper progression system since it launched, I’m not sure how I feel about it hopping onto the same seasonal grind just about every other popular online game has. I knew rebuilding Appalachia would be work, but going from one to 100 every couple months wasn’t what I had in mind.

There’s no set date for when the first season will get underway but with summer only a month away it shouldn’t be long.