Square Enix recently published a super-insightful discussion with Final Fantasy III designer Hiromichi Tanaka, and recently did the same with Koichi Ishii, the man behind the game’s expanded job system. While he isn’t quite as indifferent to the Moogle species as his former co-worker, Ishii did share his differing interpretation of the White Mage’s classic design.

Final Fantasy III was the first game in the role-playing series to offer free-form job assignments, allowing players to fully customise their parties. As such, Ishii landed the monumental task of fleshing out the various classes. He insisted that he be given full control over “battle scene character design, sprites, and animation” to ensure consistency, and director Hironobu Sakaguchi was more than happy to hand over all that responsibility.

Like many of the classes in Final Fantasy III, White Mages have an iconic look owing to the original design from the first game. If you’re a fan of the series (and don’t have aphantasia), you can probably see it in your mind right now: a long, white robe with large red triangles along its edges, right? Well, the beauty of sprites – especially from the 8- and 16-bit eras – is that they can be interpreted any number of ways depending on the viewer. Case in point: Ishii had a much different idea of what the red markings on the White Mage’s sleeves were all about.

“[W]hen I saw the job character designs in Final Fantasy Tactics, the White Mage’s robe was portrayed as white cloth with thick red zig-zag triangle designs on it,” Ishii explained. “I thought, ‘Could it be that everyone thinks that’s what the White Mage looks like!?’ The image I had is that the red part of a White Mage’s robe is embroidered from red threads imbued with magic when spun together, increasing the wearer’s magical power. The reasoning for the red threads being on the sleeves is that magic leaves the body through the hands and wrists, so that area is most effective.” 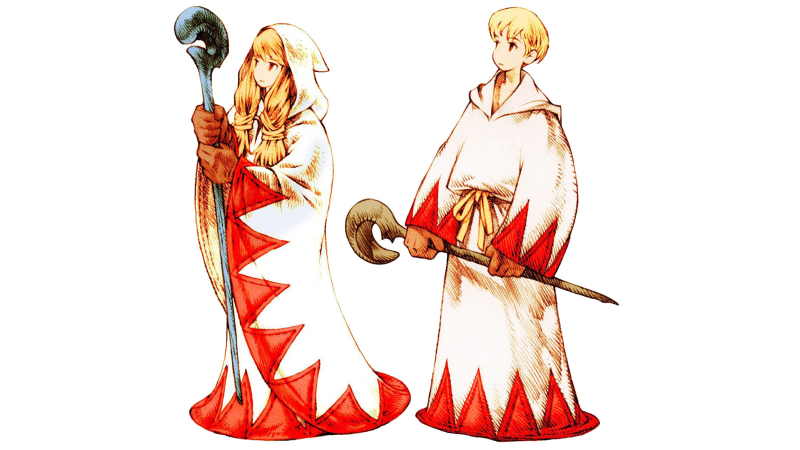 Ishii was surprised to see these White Mage designs in Final Fantasy Tactics.

“Giving every job a different pose came from my attachment to them, I absolutely didn’t want to reuse anything,” Ishii said. “When I was really in the zone, I would be constantly comparing each job to all the others and striving to implement clear differences between them, imagining how the job characters’ adventures were going as I continued inputting sprites. Because of that, completing each job sprite had this feeling of accomplishment like finishing a piece of art – every one was packed with these stories I had come up with, and it was a moving experience to finish each of them. That was also the point that I decided I wouldn’t ever design job characters again.”

While fellow designer Tanaka may not have thought the Moogles were all that special, Ishii had been carrying the species’ core design with him since elementary school. As a fan of koalas, Ishii incorporated the fluffy marsupials into the fantasy creatures he designed as a kid. The bat wings, he said, aren’t used for flying, but instead give Moogles the ability to control their direction while floating through the air.

In addition to Final Fantasy’s mascot, Ishii was also responsible for creating Chocobo, the giant birds that characters now use to get around in almost every game. Quite a legacy! Be sure to check out the full interview for more behind-the-scenes info on Final Fantasy III and Ishii’s career at Square.