At Moscow’s Vystavochnaya station, in 2013, you could board the train for free – if you could bust out 30 bodyweight squats inside of two minutes. The first hints of a glorious new fitness revolution? Nope. Just a pilot programme to promote good health (and the ‘14 Sochi Olympics). But what’s important here is this: Cloud Strife could ride that train for free any day.

Yes, Final Fantasy VII Remake, Square Enix’s modern remake of Wii Fit Plus, gives players a first-hand look at just how fit our favourite brooding merc really is. Maybe you’ve seen the GIFs and tweets. Maybe not. But midway through Chapter 9, while you’re navigating the lurid nooks and crannies of Wall Market, you’ll come across one of the game’s more absurd side quests: “Burning Thighs.”

“Burning Thighs” opens up once you enter the “Parting Ways” main scenario. It’s located in the gym, which is directly to the right of the Colosseum. You can’t miss it: Just look for the hazy cloud of testosterone and protein powder. Inside talk to Jules, the bro with a conspicuous side quest triangle floating over his head. Not two seconds into the chat, a man with mountainous deltoids will rudely make fun of Cloud’s relatively scrawny frame. Obviously, that won’t fly. So yeah, it’s a squat-off.

The squat-off is actually a rhythm game: Press the right buttons at the right time to win. But rather than lining up your presses to music – in this case, a killer house remix of the game’s battle music – you have to line up your presses with Cloud’s bodily rhythm. The game will start off simply enough with a visual aid: Just follow the cursor as it goes through which buttons you should press.

The good news is that the buttons follow the same order throughout the entire mini-game: triangle, circle, X, square, repeat. The bad news is that, after a few squats, the visual aid will disappear, and you’ll have to hit the right timing based only on Cloud’s movements. Triangle puts Cloud into a slight squat. Circle brings him into a half-squat. X drops him into a squat so deep you can feel it in your own thighs. Square brings him back up. That’s one squat.

What’s more, with each successful rep, Cloud will speed up slightly. Messing up a rep will cause him to topple over. You’ll miss out on a few seconds of the mini-game, but the visual aid will temporarily come back when you stand up again, though you’ll lose several seconds that could have been spent squatting. And remember: Your goal is simply to do more squats than your opponents. However, merely matching their score will get you a screen like this: 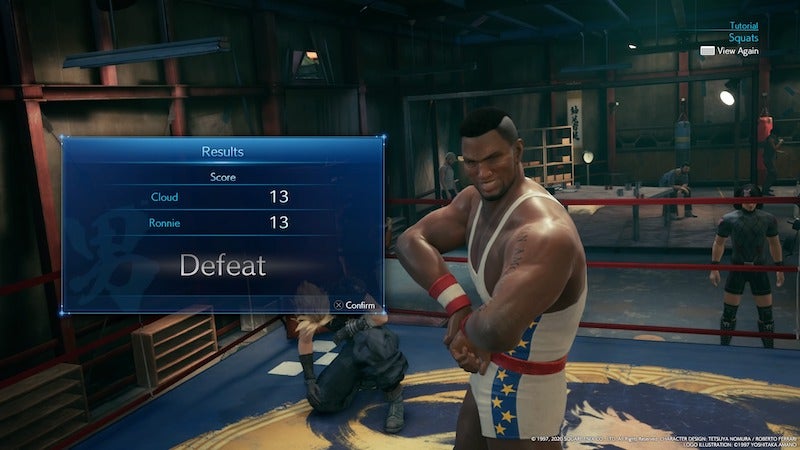 A tragedy, I know.

There are three rounds, each of which switches things up a little. These tips should help you prove to Final Fantasy VII Remake’s strongmen that proper form matters more than mere muscle mass.

Trainee: The first round is against Ronnie, the guy who makes fun of Cloud. It’s easy enough. You need only complete 14 squats, and have a full minute to do so. You’ve got this! I believe in you. Cloud believes in you. Even Jules believes in you. Beating Ronnie will earn you three Mega-Potions. This will also officially mark “Burning Thighs” as a complete side quest, at which you could move on with your day and your life. But you should know there are still more prizes to win.

Amateur: You can start the second round by talking to Jay, the Hercules knockoff standing to Jules’ left. Things are a bit tougher this time. For starters, the visual aid disappears after just one squat. The amateur round also throws a curveball in the formula. Every few squats, one of the buttons will light up. You’ll have to press it a bunch to fill up a gauge and move on to the next press. (Don’t worry: The handy visual aid will pop back up when this happens.) Instinct would tell you to hit the button haphazardly until you can move on to the next one. Don’t do that. If you’re fast, you need only hit it five or six times. Hitting it more than that can take up precious milliseconds that could have been spent crushing full reps. What’s more, if you keep pressing it past the point you’re supposed to, you’ll send Cloud crashing to the ground.

Completing 31 squats will carry you to victory. Not only will you be able to ride the Moscow metro for free, but you’ll earn an orb of Luck Up Materia for your efforts (though you may have already scored one from destroying Wedge in that ridiculously compelling darts mini-game in Chapter 3).

Pro: The final round, of course, is against the gym master himself, Jules. At face value, yes, it’s the most difficult. But if you know what to do, this might actually be the easiest round.

The visual aid disappears after two squats, and you can really only afford to mess up once. If you fail a second squat, honestly, just give up and restart. But once you get a good rhythm going and Cloud gets up to full speed – which should happen after about half a dozen squats – you needn’t pay much attention to Cloud’s movements. Just hit the buttons in order as quickly as you can and you’ll sail to victory. You have 90 seconds to fit in 40 squats. By hitting the buttons rapidly, you’ll easily clear that modest goal. 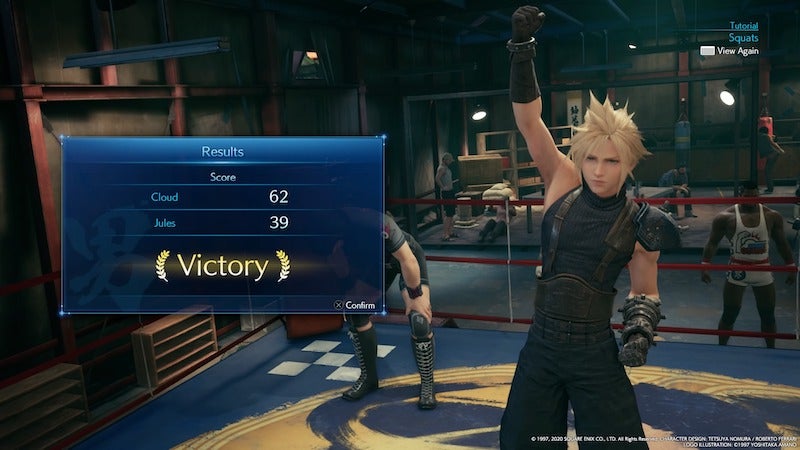 Cloud gets two free tickets to the Moscow metro.

Besting Jules will net you a Champion Belt, one of the game’s better stat-boosting accessories. It boosts the strength stat by 5 per cent and increases max HP by 10 per cent. Once you hit higher levels your HP can easily reach the mid 4,000s or higher, so this pays major dividends. (I gave it to Tifa in Chapter 9 and she kept it equipped for the rest of the game.)

Super-Duper Pro: This isn’t an official difficulty tier, but if you really want to ramp things up, make like Dwayne “The Rock” Johnson and squat in tandem with Cloud. Hey, all the gyms are closed right now anyway!