Harv in Animal Crossing is Clearly Running a Cult

Last night in Animal Crossing: New Horizons, I unlocked “Harv’s Island.” Harvey is a forgetful dog dressed in cliche hippie clothes: a headband, John Lennon glasses, and a fringe vest. You can fly to his island of Photopia, where you’re able to design sets and pose for photos with others. At least, that’s what Harv says his island is for. I’m not buying it.

At first glance, Photopia seems idyllic. There are birds chirping and a rainbow spinner dangling from the porch. There’s a lovely waterfall and something baking peacefully in an outdoor oven. You can even fly there for free! Never mind that the fencing is set up so that you can’t go anywhere on the island besides Harv’s house. Never mind that all the times I’ve shown up Harv has been outside ritualistically pounding a tambourine. He’s a hippie! The place is for photos! It’s fun!

Harv’s house looks small from the outside, but it’s deceptively large. There are six rooms you can rearrange and take photos in. The front room looks like any old photo studio, but the other rooms’ default themes grew more sinister as I explored. I can overlook what seems like a playroom, with chequered flooring that looks like padding. But in the basement, there’s an eerie, desolate room made of concrete. In the attic, there’s a room full of fake green grass wallpapered like the sky, with clouds that drift just gently enough to be disorienting. What is Harv doing in these rooms when you aren’t taking photos? Harv’s spaced out demeanour suggests that the attic is for drug trips. There’s a bordello room, probably for Eyes Wide Shut-style sex parties. I don’t like thinking about what the basement dungeon is for. 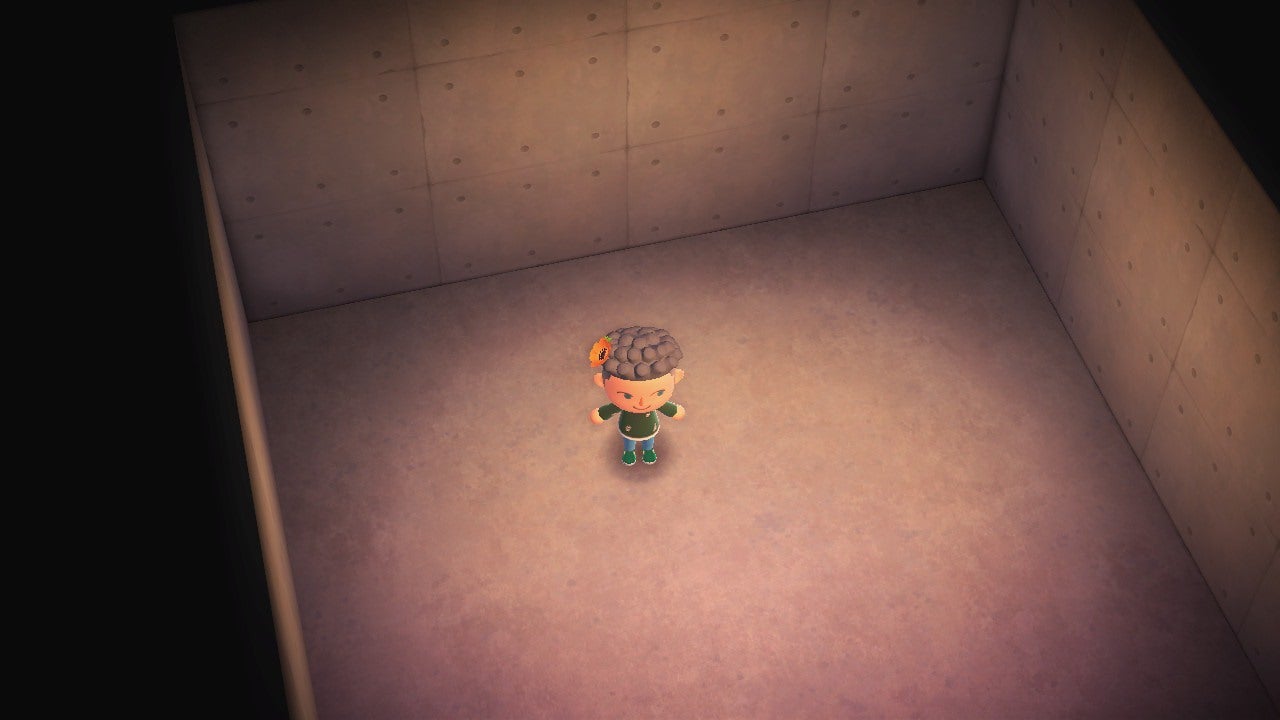 This is the basement. Why?..

Of course, if you find the rooms too creepy, you can change them to your liking. Harv says he has a special deal with Tom Nook that lets you borrow any clothes, furniture, or decor you have in your catalogue, in any colour. The specifics of this deal aren’t clear to me; Tom Nook isn’t cruel, but I wouldn’t exactly call him generous. Once you take photos with others in Harv’s studio, Nook sells posters of them for 1,000 bells a pop, but this couldn’t possibly be enough to offset the cost of furnishing Photopia with new goods in all their variations. Is Harv laundering money through these photoshoots and posters somehow, or transporting something more sinister? Maybe Nook sees something in Harv’s close-to-the-land lifestyle. Perhaps Harv serves as Nook’s spiritual advisor or guru, and Nook honours him with these riches. Or perhaps Nook owes Harv for some favour. Perhaps Harv knows a secret that Nook can’t afford to let out. 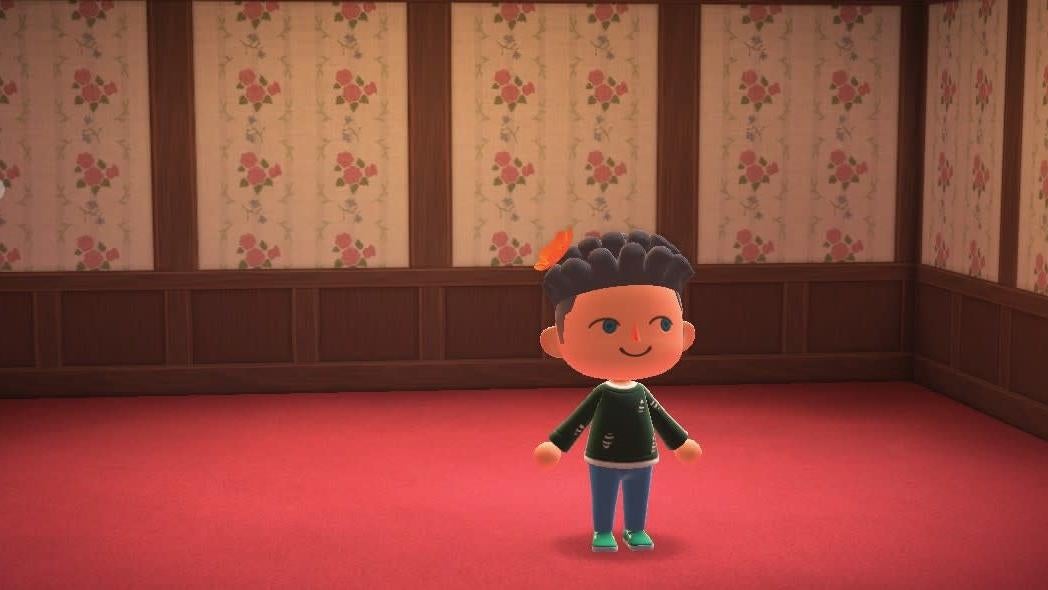 Maybe it’s just me, but this room looks like the bordello Bart works at in The Simpsons’ “Bart After Dark” episode

Photopia certainly offers plenty to be drawn to. It contains a wealth of seamless riches available at your fingertips with no strings attached, or so it seems. Amassing wealth in Animal Crossing isn’t hard, but it takes work. There’s an intoxicating freedom in being able to frolic in this world of plenty, the world Harv lives in and is so eager to invite you into. And heck, why wouldn’t you? When you tell Harv “I’m good” to end conversations with him, he replies, “You sure are, and don’t let anybody tell you different.” It feels nice to be told this, to be reminded of your innate goodness in a world run by debt and repayment, by the treadmill of toiling, acquiring, and upgrading. You’re a good person, Harv tells you. You deserve to indulge a little, to luxuriate in these unearned spoils. You deserve to shape this world to your will, to take little huffs of power. Why not stay a while, in this playroom of a world that loves you? Why not invite your friends?

See, Harv doesn’t just want to share his paradise with you. Harv tells you that you can bring in your neighbours or amiibo characters to Photopia to be your “models” and pose for pictures with you. This gives you control over your neighbours’ actions, emotions, and beliefs: You can force them to agree or disagree with something, or fill them with joy or shame at your command. Not only does Photopia give you an army of obedient servants, but it also gives you photographic evidence of whatever scenario you’d like to devise, to use to whatever ends best suit your purposes. Harv notes that when he invites amiibo characters to Photopia, “none of them ever show up.” It’s not clear why this is, but obviously he needs you to gather him more followers. With the push of a few buttons, you can amass a room of guilty participants to some staged depravity, or amass worshipful followers who obey any of your commands. This might seem immoral, but remember – Harv told you you’re a good person. Don’t let anybody tell you any different. You’re just doing it for the pictures, after all. Right? 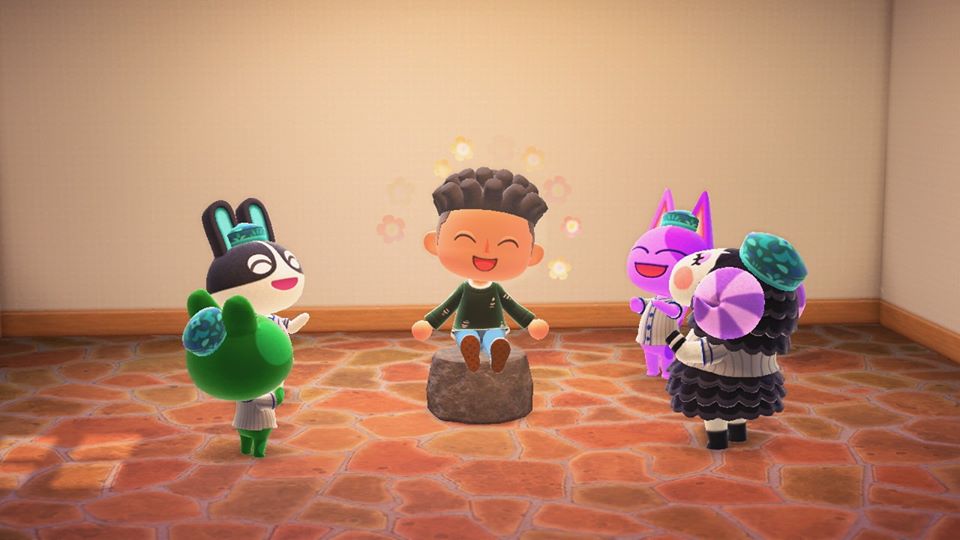 I haven’t unlocked a lot of clothes or reacts yet, so this is the best I can do, but I’m already chilled by the possibilities.

The quaint little paradise of Photopia is clearly a cult. A harmless one, maybe, at least for now, but there must be a cost for these flights, furniture, and visitors. Surely Harv isn’t doing all this just so you can have some cute photos on your Nook Phone. I don’t know what the next step in Harv’s sinister plan is, but I don’t want to be on his island to find out.