Animal Crossing: New Horizons is my first Animal Crossing game. Cartoony aesthetics, crafting, and multiple currencies usually turn me off a game, but, like many players these days, I’m finding New Horizons’ rhythms comforting. The first thing in the game to really excite me, though, has been the museum. It’s such a satisfying space to explore.

I know museums aren’t new to the series, but this one is my first and has really impressed me. In New Horizons, the museum shows up on your island once you donate enough samples to its curator, an owl named Blathers. Bringing stuff to Blathers is rewarding in itself, giving you the pleasure of completing tasks. He can also tell you interesting facts about the animals and fossils you show him, like how certain fish got their names. I’m charmed by how dramatically he hates bugs, but that he’ll tell you about them anyway, practising his curatorial duty. After enough donations and some construction, Blathers’ tent transforms into a stately museum building, with separate rooms to display the fossils, bugs and fish you’ve brought him. 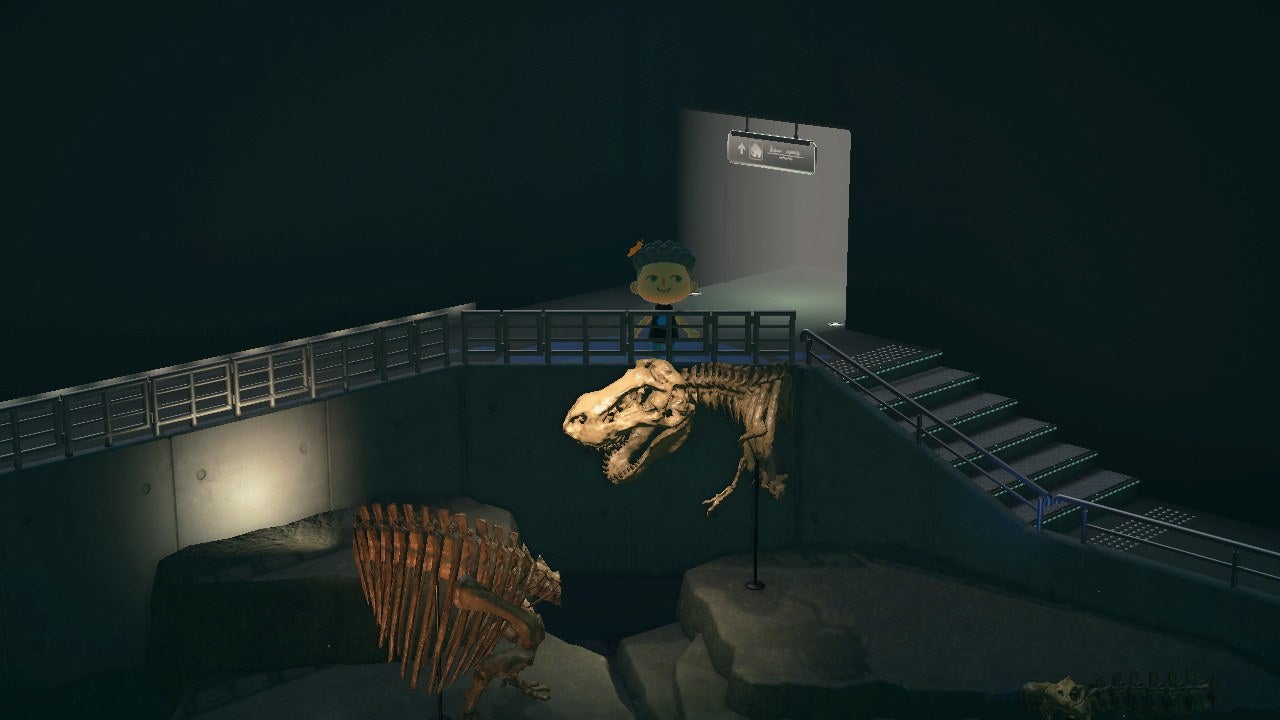 My favourite part of this room is the stairs

The museum feels more realistic and complex than the other buildings I’ve unlocked so far (however, since I’m still a bit early in the game, these buildings are just my own house and Nook’s Cranny). Its hallways are peppered with hatches and work stations that suggest private work going on behind its public facade. The thoughtful lighting and layout draw you along the exhibits; if you pause for a while before a display, the camera will swoop in to let you study its contents. The rooms feel studious and hushed, drawing my attention to the changing sounds my footfalls make when I walk across different surfaces. Each area has its own music, a main theme played on different instruments.

The distinct design of each area of the museum echoes its contents. The fossil room is underground. Descending into the dark to visit your fossils is like walking into a cave, and the dark walls and focused lighting make it feel both contained and cavernous. The first time I entered it, I spent 20 minutes running up and down the metal stairs, delighting in their hollow ringing sound. There are lines along the floor with illegible information written on them, suggesting some kind of educational path you can trace. The lines also resemble the branches of a family tree, which suits the fossil hall’s historical contents. None of the skeleton exhibits are complete yet, but some of their displays already tower over me. Even though they’re just small images on my tiny Switch screen, they feel excitingly huge. 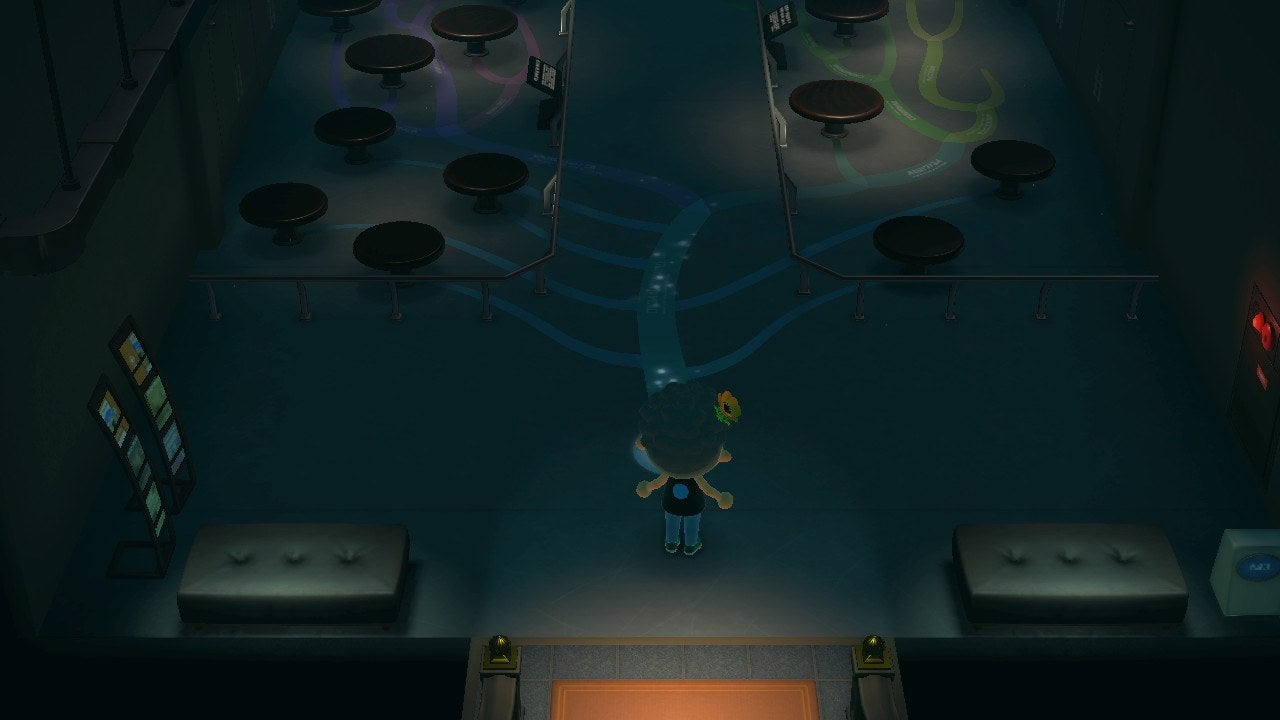 What will go on these pedestals?!

The fish and bug sections, by contrast, feel more like a nature centre than an educational museum. They’re broken up into subsections that echo their contents’ native environments. The lake fish swim in a well-lit area with sand-coloured wood floors and light green benches. The open tops of the tanks let the soothing sound of running water filter through, and light sparkles on the rippling surface of the water. The sea fish, on the other hand, are in tall, enclosed tanks in a dark area with murky blue floors. One tank features a glass walkway that makes it feel like you’re swimming underwater, where you can stand and watch your fish swim around.

The bug section also mimics its inhabitants’ habitats. There’s an outdoor part with trees and flowers (I suppose the bugs flying away isn’t a concern). An indoor part of the bug section has sandy walls and floors that make you feel like you’re in one of the bug exhibits. 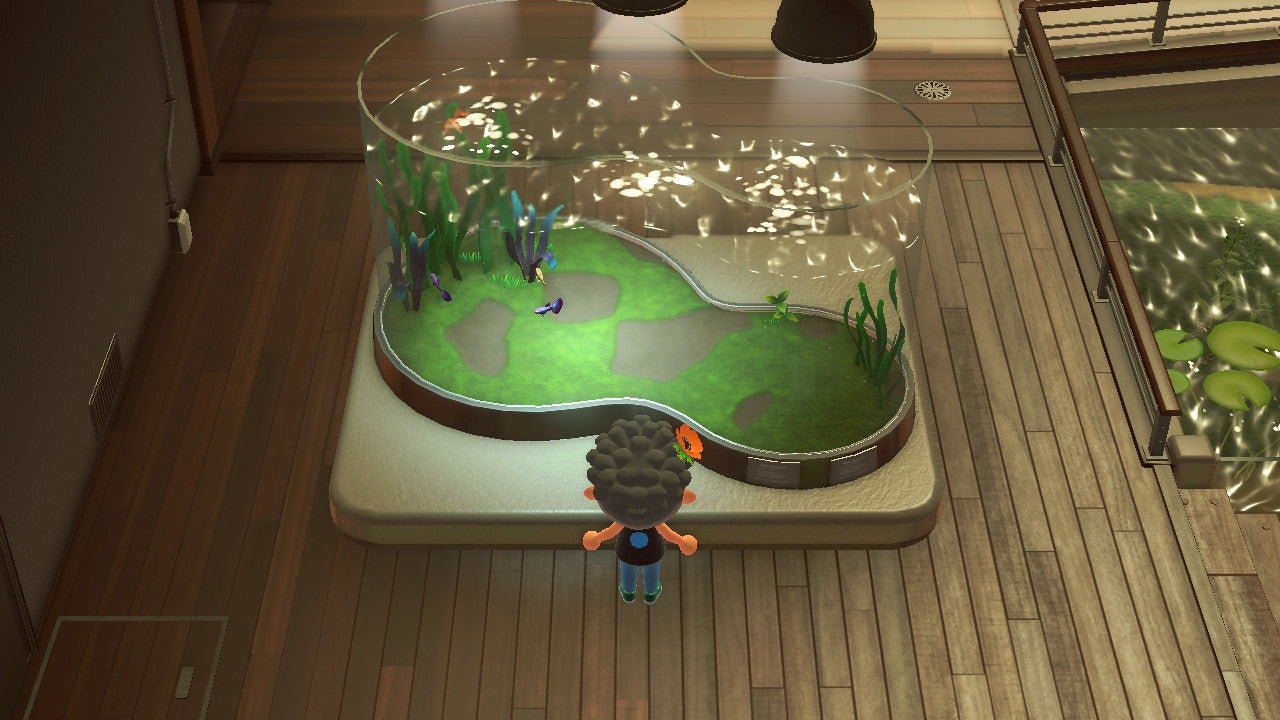 While it doesn’t feel terribly intuitive to walk from one section of the museum to another, I love how separate each section feels. It encourages me to linger and study the exhibits. If you click near a sign, it will tell you the name of the fish or bug and when you found it. The camera will follow its path so you can study it. I’ve enjoyed how realistic New Horizons’ actual animals are compared to its villager animals; in the museum, I can appreciate their design, even if I’ve mostly forgotten what Blathers has told me about them. When placed together in the museum, each donation feels like part of a whole instead of the disjointed, somewhat clunky experience of pulling out my net or fishing pole to capture them. The museum makes my compulsive collecting feel like I’m helping create something bigger than myself, like suffering through all those water eggs has been worth it.

My museum still has lots of empty spaces and unfinished fossils, but I almost like the empty displays better than the full ones. Even early into the game, I’m starting to see New Horizons’ repetitive core, but the bare enclosures and incomplete skeletons suggest there will be lots of new things to discover. I love my museum’s work-in-progress feel, and it’s fun to live a fantasy of philanthropy I can’t afford in real life. Actually finding new bugs, fish and fossils might be the same old actions of selecting a tool and then clicking at a spot, but it’s exciting to know those rote tasks support a peaceful place where I can take a breather and admire my finds.