The Best Solo Board Games

Despite them normally being very much a stay-at-home thing, it’s going to be difficult to play board games over the next few months because they tend to involve getting people over and getting social. Unless, that is, you’re playing one of these very good solo board games.

Over the last couple of years the more general board games boom has seen a lil’ boom emerge alongside it: an increasing desire from players for solo games, or at least solo components for multiplayer titles.

Once seen as the domain of the recluse, both designers and players have found recently that, hey, once you get over the weirdness of setting up a game to play by yourself they can be just as fun (or, as I’m about to get into, almost as fun) as those you play with friends.

It’s not like there isn’t precedent for this. Solitaire/Patience (and games a lot like it) have been around forever, and if you really want to push the definition stuff like crosswords and sudoku are solitary games as well. The difference with a lot of more modern games being that you’ve got to set up a whole lot of cards, tokens and miniatures to get them up and running, which can add to the experience, but also take a lot of time for something that only you are going to see and enjoy.

Which, I’ll be honest, is usually the thing stopping me from playing (excuse me) by myself. It can often feel like a chore getting a board game out to play solo, packing and unpacking and moving pieces around with nobody else to see you when, uh, I could just be playing a video game which does all that nonsense for me.

And yet... video games are also loud and make me sit in my office or on my couch, and all I do is move a mouse and keyboard around. As weird as it can be there’s also something wonderfully relaxing about playing a solo board game, something physical and tactile and quiet that you just don’t get from a digital experience.

So over the next few weeks and months, as we find ourselves practically trapped in our homes and discouraged from socialising in-person, it might be worth looking at board games and instead of freaking out about the fact they support up to 4-6 players, see how many of them start at just 1.

Here, I think, are the best of them. Or more importantly to note, the best of the ones I’ve played. Some of the entries you’ll find here were designed with solo play in mind and absolutely excel there, most are fantastic multiplayer games that just happen to also have a very good solo mode, and even if it’s not quite as good as the full experience, it still lets you play by yourself and have more fun than you’d have, I don’t know, cleaning your house or growing brain worms on Twitter. 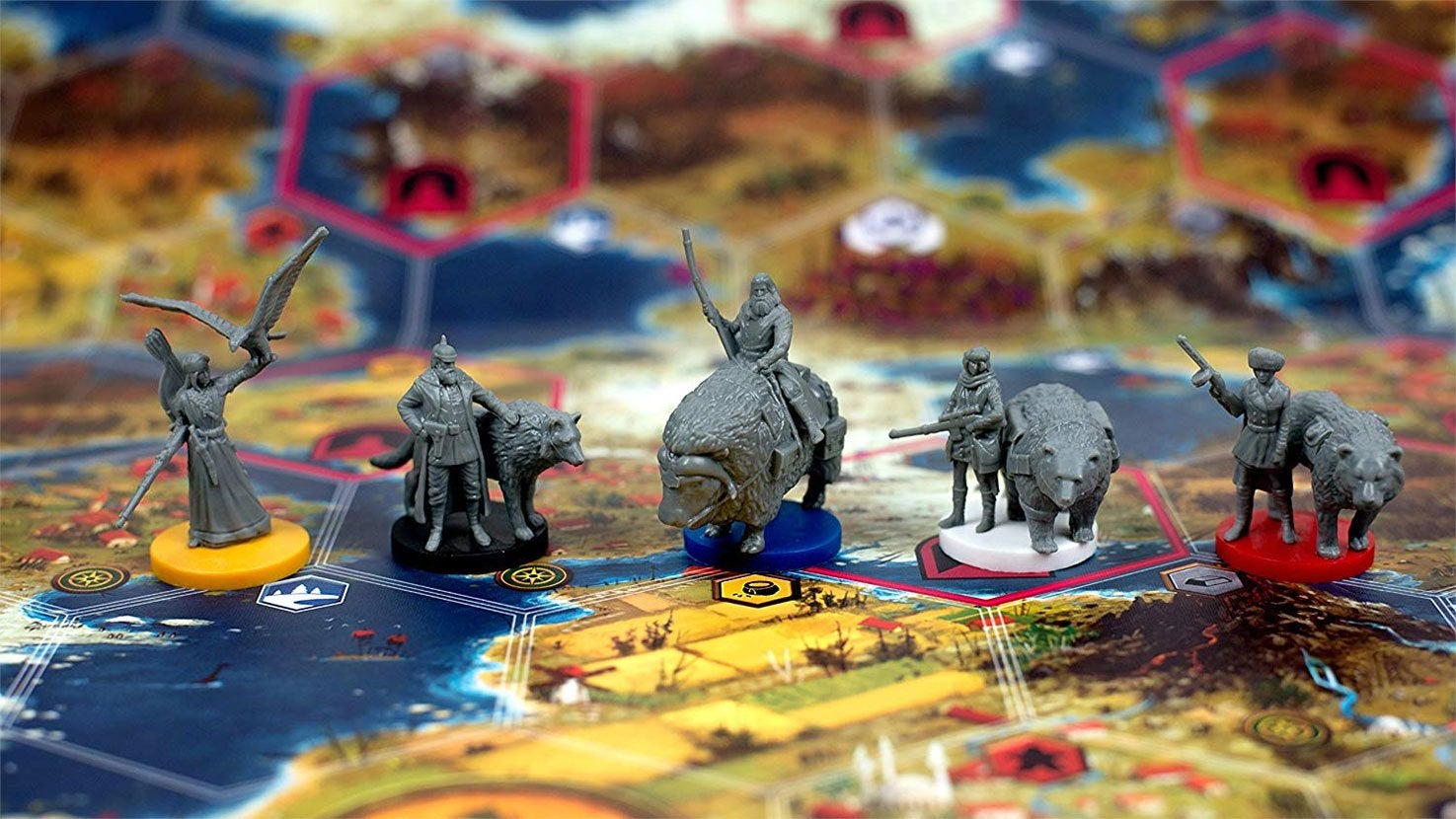 Scythe is a great game to play with friends, but Stonemaier Games put a lot of work into its lesser-known solo mode as well, and it shows. Anyone wanting to travel back to this dieselpunk vision of the 1920s solo will find its 'Automata' version to be a challenging and strangely rewarding opponent, with a detailed deck of cards acting as an 'AI'.

A lot of the time an AI deck will play more like a speedbump or roadblock than a true rival, but Scythe’s can often feel outright cunning, testament to the fact it was developed specifically by solo specialist Morten Monrad Pedersen.

Most of the solo modes on this list are great, but you can never shake the feeling they’re not quite as great as it would be playing with friends. Fallout is the exception.

I had more fun playing Fallout solo than I did with friends. It’s fine with a crew, don’t get me wrong, but there’s something about wandering the wastes alone that makes it feel closer to the source material than bringing others along. The fact the game is built around working your way through a story deck helps here, and the whole game’s design, especially its exploration and combat, just works more cleanly by yourself. 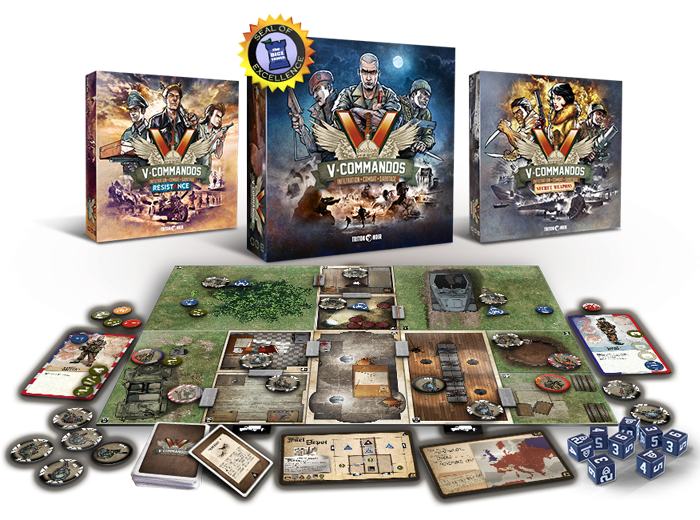 I love this game, and feel like it doesn’t get the wider attention its stealth mayhem deserves, so I’m going to shout it out here.

I often play V-Commandos with friends, because as a co-op experience it’s unique in its blend of planning and tactics, but the entire game’s design is set up so that you can play it solo without changing a single thing. You just take control of all the soldiers instead of one of them.

Which means you get to play the same unpredictable, gratifying game that has brought me my single greatest board gaming moment, only you don’t need to buy any extra crisps and lager for it.

THIS WAR OF MINE 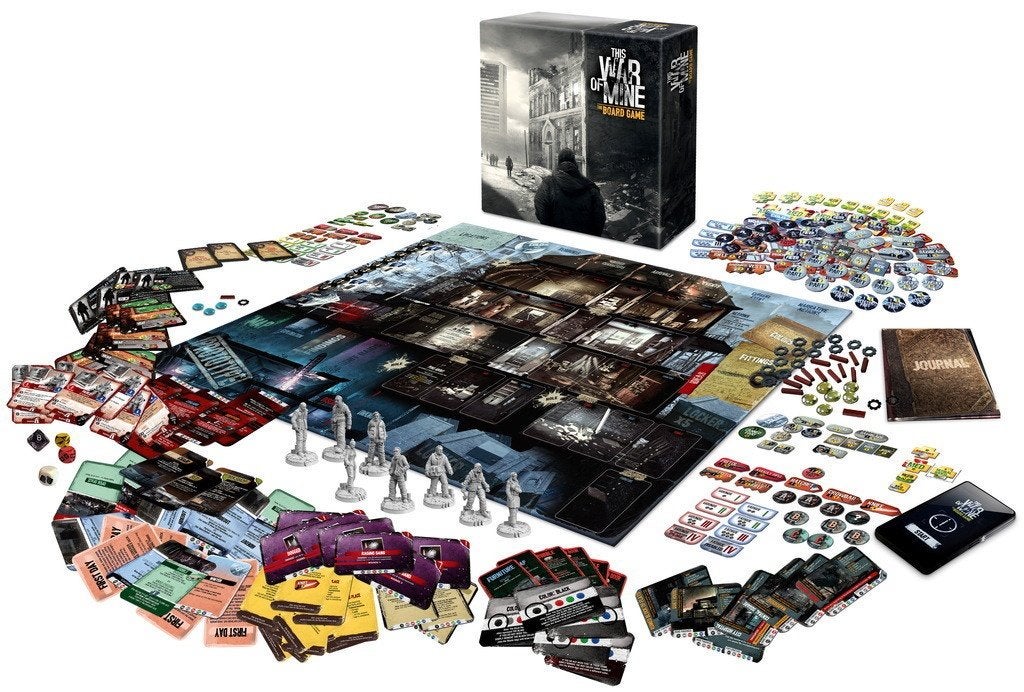 This War Of Mine is a surprisingly faithful adaptation of the video game, which means that while it’s designed for social play, with everyone taking control of a character each, you can – like V-Commandos above – just play solo and control everyone.

This can actually work best, depending on your board game crew’s social dynamics, because one of the game’s characters, the leader, is a bit lopsided compared to the others, so having him alongside everyone else under one player’s wing actually works really well.

If you’re after a roguelike-ish RPG experience instead of just a game where sides/players are vying for victory, this might be a good one to look into. 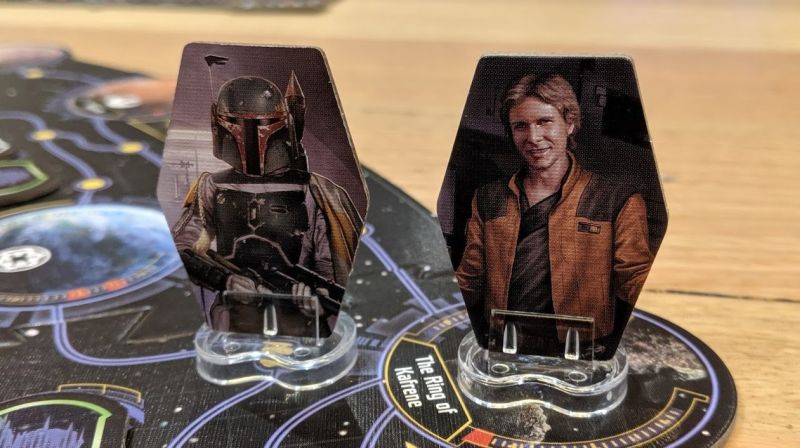 This was, in hindsight, maybe my favourite game of 2019. It has a wonderful sense of freedom to it, inspiring many of the same feelings you get from looking at a map in Skyrim, littered with dozens of jobs and countless ways to do them.

You play as a smuggler flying around Star Wars’ outer rim, completing all kinds of missions for different types of factions and characters. Without a turn or time limit, you can play entirely at your own pace, taking whatever mission you feel like at any given time.

Outer Rim’s solo mode runs on an AI deck and, while it’s not the same as trying to out-smuggle your friends, the game’s limited player interaction doesn’t make that as big an issue as it might otherwise. 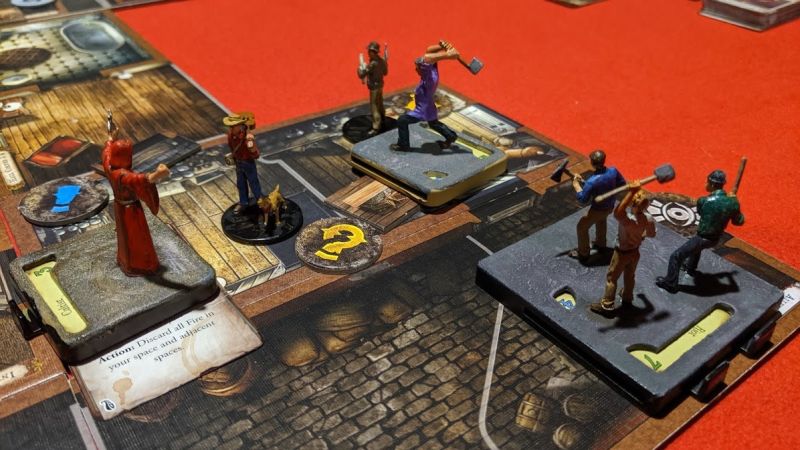 This is another case of a brilliant game simply being playable solo instead of needing its own custom mode. just take control of everybody and you can struggle your way through Lovecraftian mysteries.

I love this game, its maybe the best of FF’s similar styles of dungeon crawler, because its consistently tense and challenging without ever feeling cruel.

There are two editions of this game, though, and you’re going to need the second one to do this as it puts an app in charge of the forces of darkness (first edition needed a human opponent). 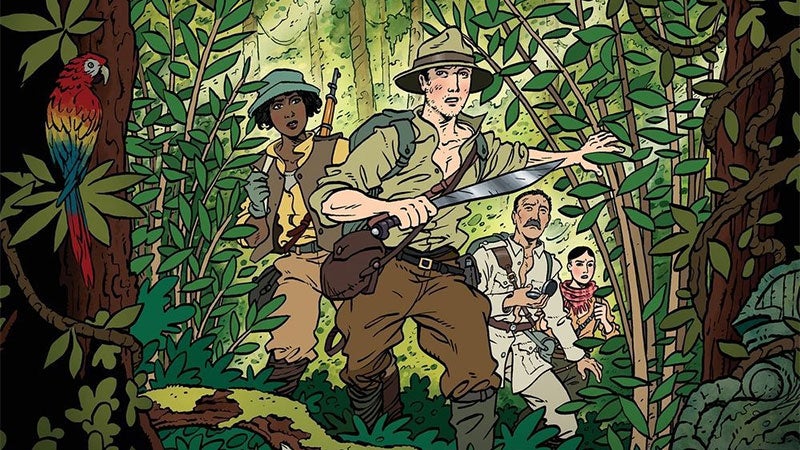 The Lost Expedition is a fun, if also brutal little card game about venturing deep into the jungle then trying to very quickly venture back out again alive. It’s a desperately frugal game, where every piece of ammo, food and health can be the difference between life and death.

Which you’d better be prepared for going in, because you will die a lot.

I’ve picked this game for a few reasons. One, because it’s a great challenge, something you can set aside an afternoon towards to try and perfect the way you complete your runs. Two, because it’s much lighter than most of the other games here, requiring far less setup. And three, because it is gorgeous. 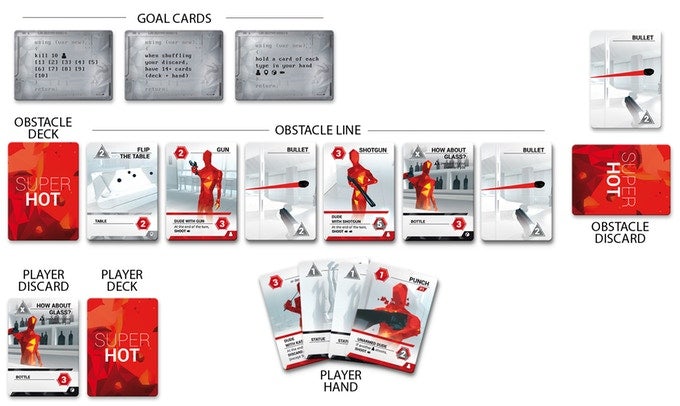 Superhot was a very good video game. And this is a very good adaptation of it. It strips the core premise – a strategic employment of movement – and turns that into a relatively simple card game.

While designed for multiple players, it’s actually truest to the video game when you play solo, as you work to overcome a series of challenges – a table, a man with a shotgun – and try to get past them with only the savvy use of a small number of action cards.

It’s not the deepest game on this list, but if you feel like playing an FPS in spirit without any of the stress or noise, this is great.

You absolute madman/madwoman. Gloomhaven, one of the biggest tabletop endeavours in recent years, is enough to overwhelm even seasoned parties of players, so anyone even thinking of playing this by themselves is surely out of their mind.

Or... are they? These are new and strange times we’re living through. I’d have previously advised against playing Gloomhaven solo because I’d have assumed you simply wouldn’t get the time or space to do it. But, hey, right now those are two of the only things we have, so if it was ever going to be done, now is the time. 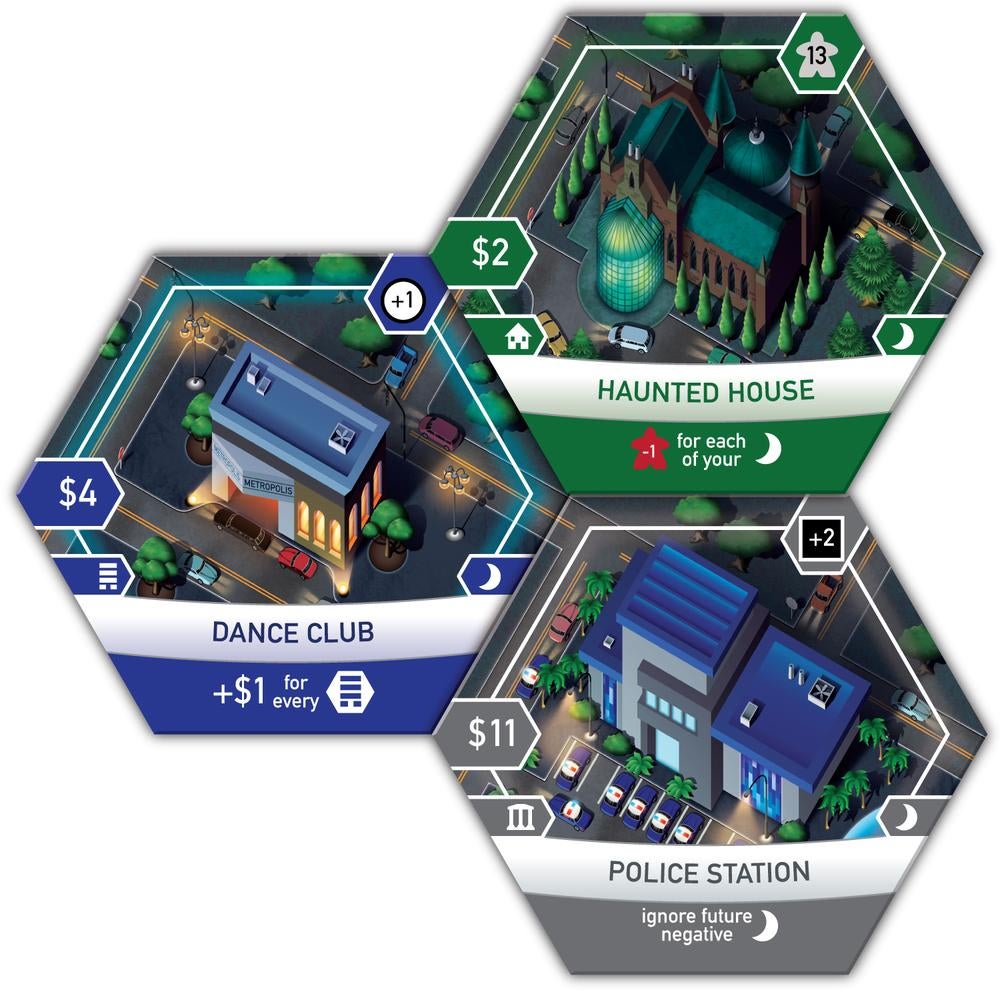 Suburbia is a bit like SimCity, in that you have to first build a city, then build it up. It’s also a bit abstract though, based on the successive placement of hexes, not a freeform allocation of zones.

It works best as a small game for 2-3 players and works even better in app form, but there’s also a solo mode where you can challenge yourself to build the most optimal city you can. Which, when you think about it, is really all you’re getting out of city-builders on a computer anyway.

I wouldn’t recommend getting this just for solo play, but it’s a great game to have around with the solo mode simply complementing that.

LORD OF THE RINGS: THE CARD GAME 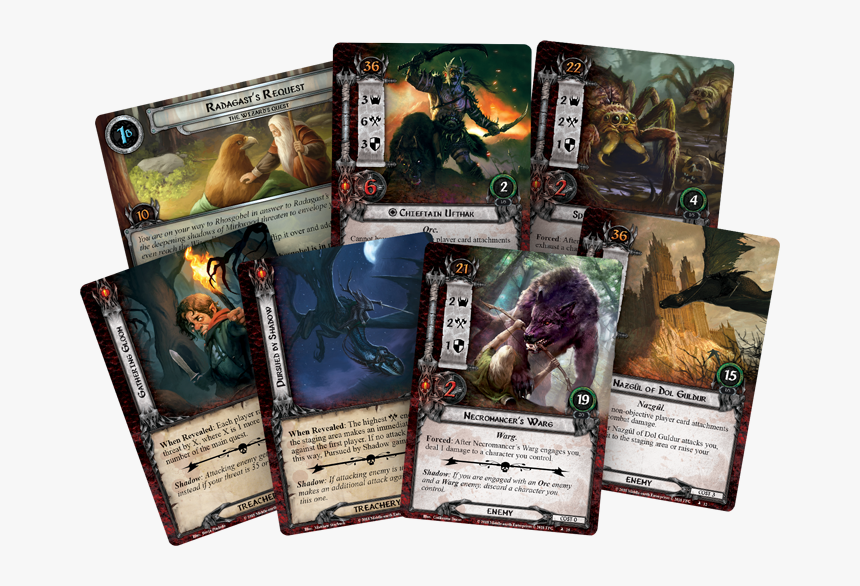 I’ve saved maybe the best until last. This card game is fantastic, able to somehow turn a few decks into an adventure as epic anything Tolkien himself could have come up with. Assembling decks of heroes to create a Fellowship, you can move out and cover the entire saga if you want, with even the earliest decks providing a challenge.

Lord of the Rings gets really hard later on, but playing solo – where once again you simply take control of all characters – is actually one of the easiest ways to play it, because you’re in charge of the entire strategy. The game’s fine margins between success and death mean there’s nothing more frustrating in a regular co-operative game of this than someone else dropping the ball, but in solo you’ve at least only got yourself to blame.

With loads of extra decks available outside the core game, there’s weeks if not months of game here.

And that’s it! Remember, I said up top that these are the best games that I’ve played. It’s almost impossible to play as many board games as it is video games, so if there are any real good ones out there that I’ve left out, if enough of you can convince me I can add it to the list!

Tags:
feature
in depth
board games