Guns, Love, and Tentacles, yesterday’s major update to Borderlands 3, revolves around a gay wedding on an alien planet. While that’s fantastic in its own right, the rest of the expansion is pretty great too, combining fresh aesthetics with a bevy of cool new guns and what is arguably the series’ only good boss fight in 10 years.

Guns, Love, and Tentacles tasks the player’s Vault Hunter with travelling to Xylourgos for the destination wedding of sport hunter Alistair Hammerlock and salty aristocrat Wainwright Jakobs. These nuptials were teased during the end credits for Borderlands 3, and now the big day has finally arrived for these two fan favourite characters. Accompanying the player is Gaige, a previously playable character from Borderlands 2 who is now older and somewhat wiser in her new role as a wedding planner.

Borderlands has always had some of the best LGBTQ+ representation in AAA gaming, and that continues with Guns, Love, and Tentacles. It handles Alistair and Wainwright like real people struggling to come to terms with their differences despite the noticeable tropes that make up most of their individual personalities. The jokes are focused on the absurdity that often comes with planning an intricate wedding regardless of the gender of the participants. By the end, neither groom is dead, which is always a plus.

The scenery on Xylourgos is much different than what we’ve seen from Borderlands prior to this expansion. A massive (and dead) monstrosity known as Gythian serves as the centrepiece, and inhabitants have built a town directly under its corpse. Gythian is an ever-present aspect of the environment and storyline, with tentacles stretching both literally and metaphorically across the planet’s vast wastelands. Xylourgos is also cloaked in darkness thanks to a perpetual solar eclipse, the thin glimpses of light that manage to escape casting an eerie blue-green hue over the icy landscape.

Guns, Love, and Tentacles borrows a lot from the works of science fiction author H.P. Lovecraft, who is remembered as much for his racism as he is for his indelible mark on horror writing. The very first mission in the expansion, “The Party Out of Space,” is a reference to “The Colour Out of Space,” a short story published by Lovecraft in 1927. Gythian is an obvious homage to Lovecraftian deities like Cthulhu and Azathoth. The main antagonistic force is a cult that worships Gythian’s heart as part of some bizarre love ritual. There’s also an NPC who believes himself to be a fishman à la “The Shadow Over Innsmouth” and asks the player to lower him into a frozen lake to commune with his fish queen.

Humour is a big part of Borderlands, and Guns, Love, and Tentacles doesn’t skimp on, well, let’s say attempts at humour. Some moments, like the fishman mission, hit the mark, but for every success there are at least two or three failures. Gaige was one of my favourite characters in Borderlands 2 due to her compelling backstory of becoming a teenage fugitive after a science fair project gone wrong, but she’s been reduced to spouting annoying one-liners like a cheap Tiny Tina. Oh wow, you say “margs” instead of margaritas? That’s so quirky! And if you miss this personality trait the first time, don’t worry – the writers try to make it a thing throughout the rest of the expansion.

That little complaint aside, there’s still a lot of heart in Guns, Love, and Tentacles. After an ill-fated visit to the wedding venue, Wainwright Jakobs is possessed by a malicious spirit intent on making Wainwright his next vessel. This obviously puts a hitch in the wedding plans, and it’s up to the Vault Hunters to trudge the wastes of Xylourgos to put things right. During these adventures, it becomes clear that both Alistair and Wainwright have reservations about the marriage. Both grooms are worried they aren’t a good fit for the other, and their wrestling with these doubts provides a genuinely endearing background to the supernatural craziness that sits at the forefront of the narrative.

Much like the rest of the series, Borderlands 3 isn’t a game known for its incredible boss fights. They usually go a little something like this: a giant bad guy appears and you shoot them until they die. Sure, unique elements like weak points and multiple phases often come into play, but players generally know what they’re going to expect heading into these encounters. Guns, Love, and Tentacles sets itself further apart from the usual Borderlands experience by providing a boss fight that actually feels difficult, compelling, and rewarding. 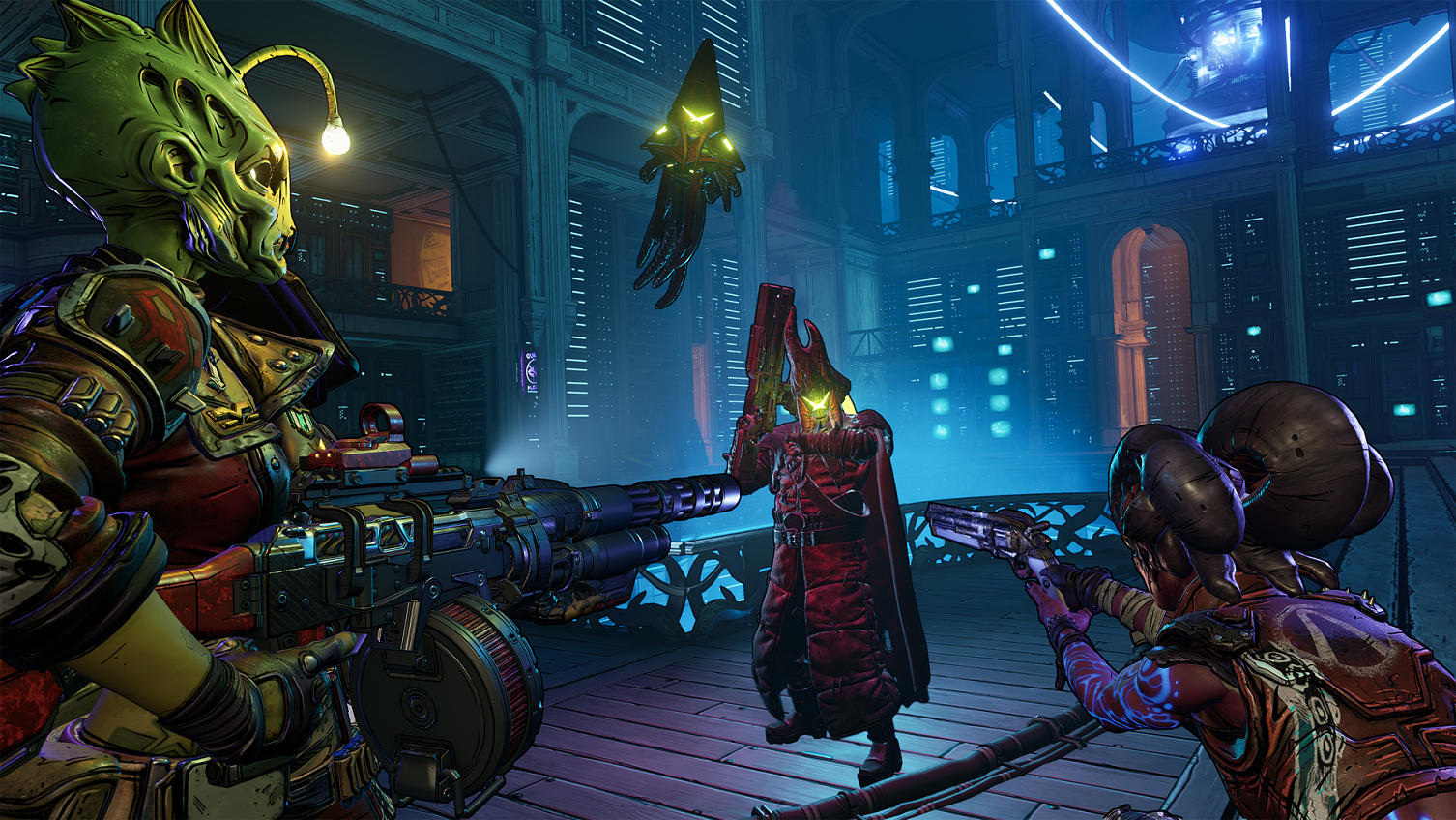 About halfway through the expansion, the big bad summons a servant known as the Empowered Scholar. At first, he seems like a typical Borderlands boss, but then he gains new abilities that make him more challenging to fight. The player can use pieces of the environment in creative ways; the fight requires some tricky jumping and forethought. I’m not too proud to admit that I died at least half a dozen times as I learned the Empowered Scholar’s patterns. He never felt overpowered or cheap, and it makes a nice change from defeating Borderlands bosses through brute force. Defeating the Empowered Scholar felt like an accomplishment, at least more than anything else the developers have thrown at players over the last decade.

Guns, Love, and Tentacles is one of the most enjoyable romps I’ve had with the Borderlands series since it debuted in 2009. The guns are satisfying, the love story feels realistic and respected, and the tentacles are a great addition to an already gorgeous game. It’s everything I wanted from a Borderlands 3 expansion, and I can’t wait to spend more time on Xylourgos in search of the perfect gear.