Exit the Gungeon is a Bite-Sized Good Time, If You Can Deal With the Randomness

When we entered the Gungeon in 2016, we did so via a top-down dungeon crawler in which exploration played a major role. Now that we’re ready to Exit The Gungeon, our method of egress is trying to survive a handful of elevator rides as enemies spray glowing red bullets all over the 2D screen.

Exit was originally designed for mobile and launched last autumn on Apple Arcade. Now it’s finally out on Switch and PC. While it’s clearly a smaller, less ambitious game than its predecessor, I’ve still been having a lot of fun trying to survive its murder rooms.

Picking up immediately where the Enter left off, Exit The Gungeon has you try to escape a prison as it’s crumbling around you. This means taking a series of elevators connected to one another by large rooms. Clearing the large rooms will give you the chance to collect a special item that will help you in the journey, while the elevator rides are capped off by daunting boss fights that reward you with currency that you can spend in the main waiting area to unlock better weapons and equipment for future attempts.

Though it shares a similar structure to Enter The Gungeon, a few key differences make Exit a very different experience. The first is a “blessing” that you get at the start of each run, which causes your gun to change at regular intervals with no indication of what’s coming up: One moment you might be blowing enemies away with a shotgun, and then the next you’re methodically taking them out from far away with a charged-up laser cannon. 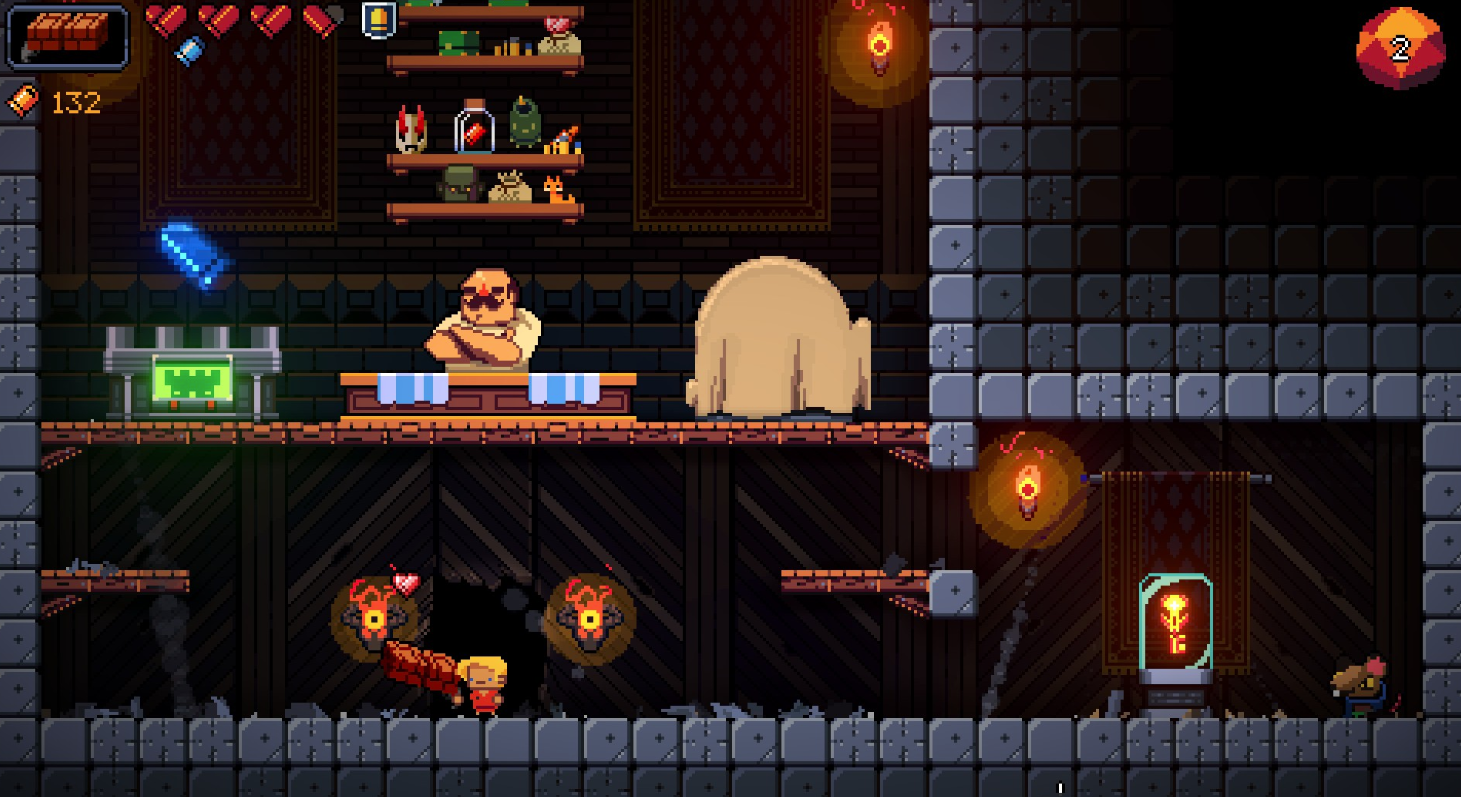 This cuts out most of the decision-making and careful pre-game planning of Enter The Gungeon. Exit is more about getting your kicks from thinking on your feet and constantly adapting to whatever the game throws at you next.

The weapons you get are random, but also influenced by how well you’re doing. Kill enemies without taking damage and you’ll start building up a number in the top-right corner. A better number means the higher chance you get a better gun on the next refresh. Start getting hit, and those odds plummet.

When things are going right, it can feel sublime, but when they start going wrong they start going really wrong. The low-powered banana-peel pistol is a good joke, and fine for taking on run-of-the-mill grunts. It’s also the last thing you want to get stuck with in a boss fight. 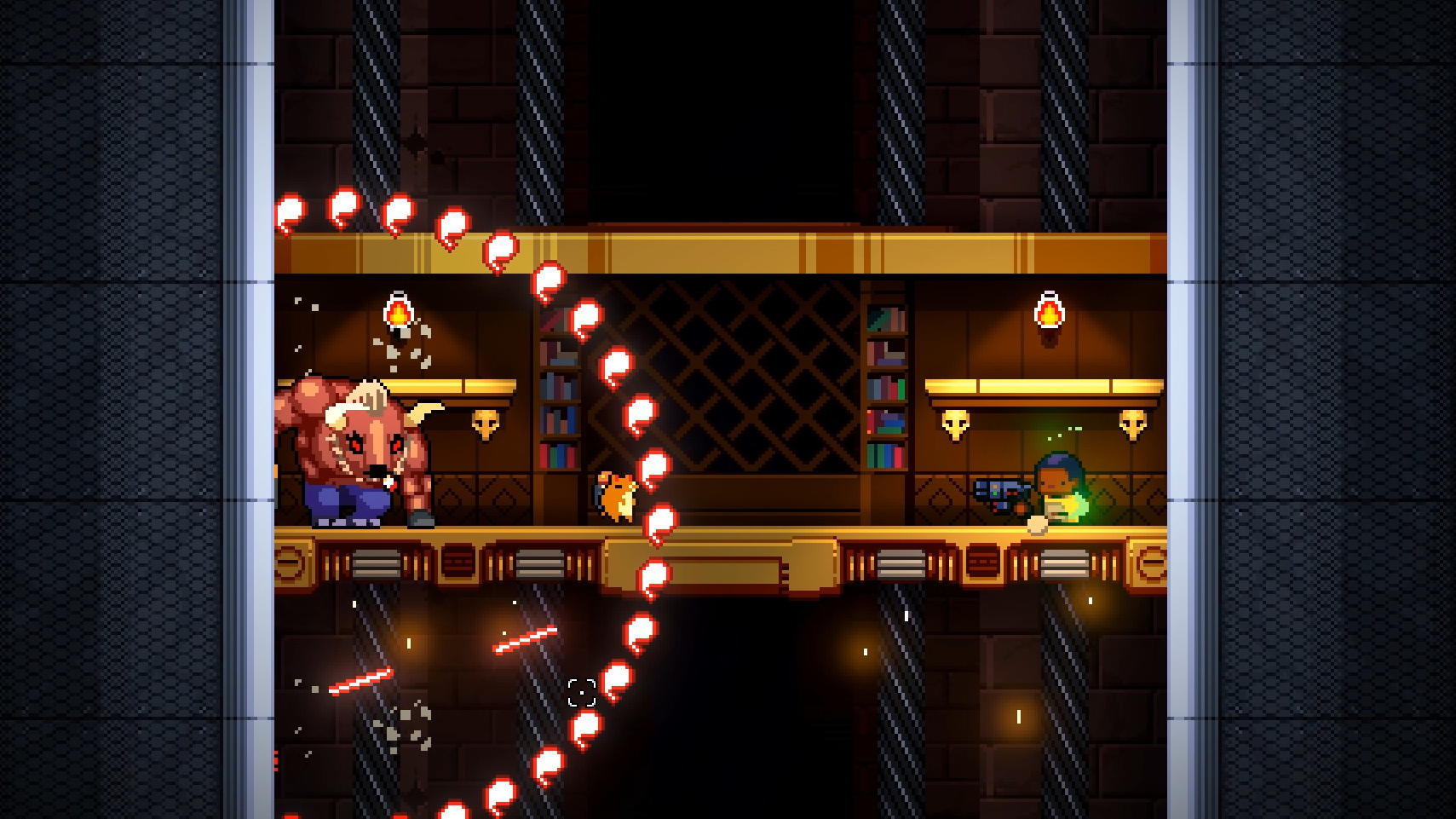 Dodging is also a little tricker in Exit The Gungeon. You can dodge left and right while standing still or in the air. Doing so makes you invincible to incoming fire, and so does jumping up or dropping through a platform. As a result, you want to spend as much time as possible in the air. But you need to balance that against your need to fire your weapon, which can only be done on the ground. Also, if you’re jumping constantly, you risk being hit as soon as you hit the ground. In theory, it feels like a very generous system. In practice, it takes a lot of getting used to.

Reorienting my brain around these new challenges is what I’m enjoying most about Exit The Gungeon. I don’t feel like I have as much agency because of the random gun rolls, but I also like being thrown directly into the action and seeing how long I can last. (So far, not past the second boss.) It’s a tiny game that’s best played in short bursts – the length of time you might get out of dumping a token or two into an old arcade cabinet. And in those short gaming sessions, I’ve been having a blast.