Season Two of Fortnite has landed, bringing with it more than a tinge of gold. Gold, gold everywhere! But mostly gold running through the mysterious Agency and their leader, Midas. Despite the predictions and rumours we didn’t get a new material, never mind helicopters or submarines; ideas widespread around the community before launch. Such is the nature of the modern service game’s relationship with a huge and always-online audience: is the reality a disappointment? A relief?

Well, let’s say reaction is mixed. Obviously it’s very early in this new shiny season – due to finish on April 30th (promise?) – but the community and professional players are not short on opinion. As the saying goes, you can’t please everyone, to which we might add: especially after several delays.

One of the biggest changes is the addition of enemy bases filled with AI henchmen, over which the audience splits. If we look at more casual and social players, the bases are enjoyable little areas filled with some of the best weapons from the history of the game – the Boom Bow, Suppressed Sniper, The Grappler – but damn those AI are as irritating as the Stormtroopers ever were. Away from the crooked damage they deal, the addition of ‘shaking them down’ to reveal teammates and local chests is a lovely touch, and many squads are enjoying this new layer of hitting a base to tool up before looking for a real fight.

These new locales are delivering for the players who love little secrets and dollops of lore. There are bases and hidden lairs everywhere, even on the spawn island…

And, for those who love pure destruction, there are players who discovered the new Oil Rig point of interest (POI) can be completely demolished…

Down with Big Oil! from r/FortNiteBR

Have you noticed that some toilets and dumpsters are now secret tunnels to underground enemy bases? This player obviously did, as they set a C4 trap. Which now many others are cottoning on to…

There’s no denying the level of fun the Agency has brought with it. Casual players and professionals alike are pouring into the main four POIs at the moment, so much so that the rest of the island can feel bare, especially when you consider that Epic has extended the time before the first safe circle. The general consensus is that this was done to allow players to explore – all the bases are on the coasts – but it’s making games feel emptier than they used to. Adding to this is the fact that some players actually die to the henchmen, leaving less competition on the field.

I’ve played around fifty games since season two’s launch and many of my matches were crammed to the brim with bots. Is this because the bots are designed to only land on the mainland, rather than the bases? On console at least, decent teams will dominate until the skill-based matchmaking catches up.

Away from the map, Fortnite has further embraced memes. The Battle Pass is littered with them, giving players ludicrous emotes, the thicc cat, more Peely and nods to other games – have you seen how the Yacht looks like a COD map, and that the cardboard box obviously pays homage to Metal Gear Solid?

Of course, many players won’t have reached level 100 of the Battle Pass yet, so probably aren’t seeing the biggest frustration with Midas and his arrival. Midas is the skin you receive at level 100 and every weapon he touches turns to gold – even the speedboats. And they stay gold when you drop them, too. This is causing some confusion to those looting, thinking they’re grabbing a legendary weapon, when really, it’s just had the Midas touch. You can tell by looking closely at the inventory bar, of course, but in the heat of the moment it’ll cause confusion. 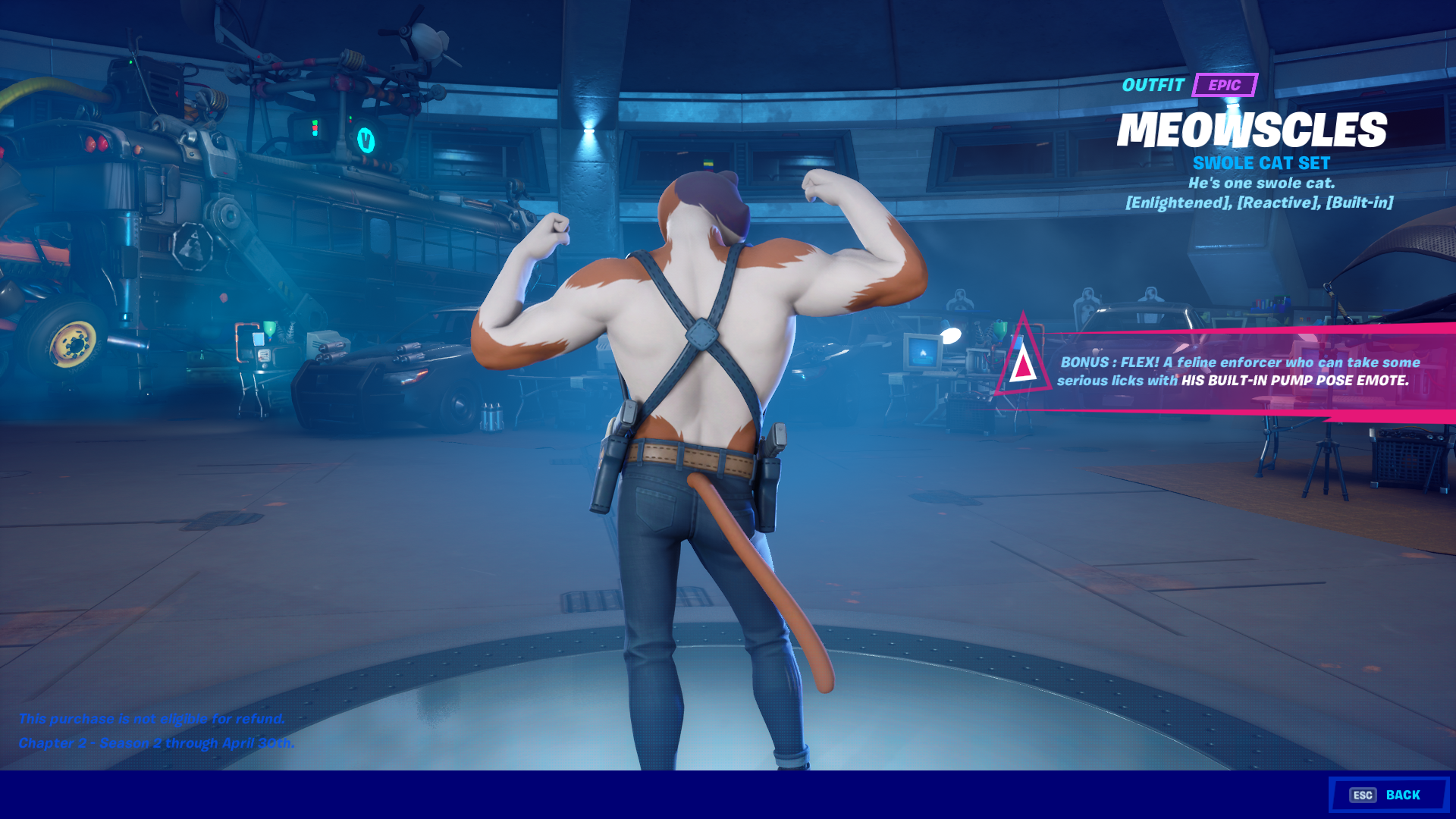 Another gripe, oddly, is the new customisation of the skin Maya. Maya is a female skin whose clothes, hair, face paint, and accessories can be customised down to the colour of individual items. However, the choices are permanent. They have to be, really, because otherwise Epic will have to constantly offer a section of the menu for this new concept. Some players are nevertheless upset that, down the line, they won’t be able to change her hat or trousers. It’s a tough balance; on the one hand the game’s offering a new level of customisation, on the other it’s locking you into your first choice, which kind of rubs against the whole idea.

Lastly, and as ever, the game has new bugs from the small – character hair floating above their heads – to the frustrating – seeing a Slurp truck in the distance, only for it to vanish as you get closer. Players on high-end PCs are also reporting dramatic framerate drops. Yes these will be fixed, and generally the problems are minimal: until they are, all you can do is laugh at your levitating syrup.

Finally, there’s Deadpool. There’s not much to report on this addition until he’s actually arrived, but the latest high-profile crossover reinforces Fortnite’s status as a platform, even though in this case there isn’t a new film on the horizon. It’s led many in the community to speculate about whether the near-future may include something shaken, not stirred: the new James Bond film is coming soon, and matches unusually well with this new Agency ‘Spy Vs Spy’ concept.

With over two months of this season left to run, the smart money is on map changes involving the island becoming flooded or the Oil Rig POI causing a spill – both of which were hinted at in the teasers before launch day. Then there’s the absence of big competitive announcements which are due soon, with rumours rife about the format of the World Cup. As always with Fortnite, Epic has delivered much to keep the community interested, but it’s still a waiting game.