Wide Ocean Big Jacket, a Chill Game About Camping, is the Perfect Length

As a kid, I never liked camping. I went to a multitude of Boy Scout and church camps, but I could never escape an overriding feeling of anxiety, like the trees were going to close in and suffocate me with their bristly branches. Turns out, I was just doing it wrong. The camping trips I went on as a kid were all structure, exasperating obstacle courses of planned activities and curfews. Good camping, on the other hand, is chill AF. It’s just you, some friends, maybe some alcohol, and a whole bunch of trees. Wide Ocean Big Jacket is a game about good camping.

Wide Ocean Big Jacket – which I have taken to calling Wide Ocean Short Skirt Long Jacket (Na Na Na Na Na Na Na Na Na Na Naaaa Na) – is a short PC/Switch story game about four people who’ve embarked on a camping trip. Two of them, Brad and Cloanne, are adults who camp frequently. The other two, Mord and Ben, are young teens who have very little camping experience. Brad and Cloanne are married, and they’re Mord’s aunt and uncle. Mord and Ben are “dating,” which actually means that they’re both 13, but have been best friends for years and are figuring things out. What ensues is neither shenanigans-ridden nor littered with gruesome beheadings (famously the only two things that can happen in forests). Instead, Wide Ocean Big Jacket is a game about people living a brief, small life together and, through it, getting a better sense of what they want from their regular, large lives.

You control everybody, though not all at once. Instead, the game jump cuts between characters, or has you control characters in pairs, or puts everybody in a big circle and lets you swivel the camera between them. Often, interactions involve walking up to other characters and initiating conversation with them, but Wide Ocean Big Jacket sprinkles oodles of cleverness into this initially unremarkable formula. Words erupt onto the screen to convey objectives or capture the mood of the moment. Frequently, this is used to comedic effect. For example, when Mord – the wide-eyed, rambling goofball to Ben’s quieter, more meticulous goofball – decides that she’s going to pee in bushes outside an outhouse because she’s in nature and there are no laws, you get these messages that mirror Mord’s hyperactive but increasingly self-conscious thoughts: 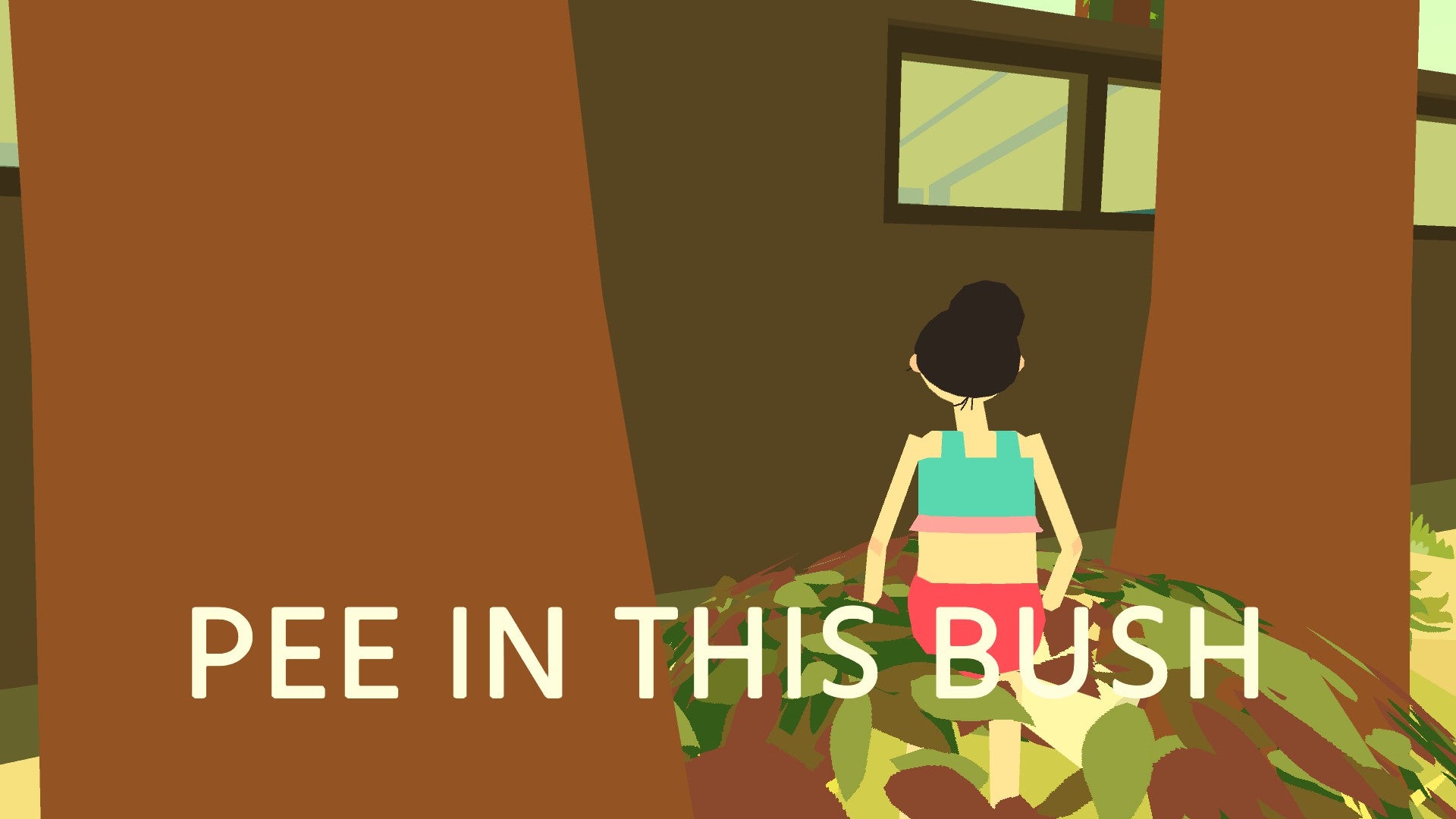 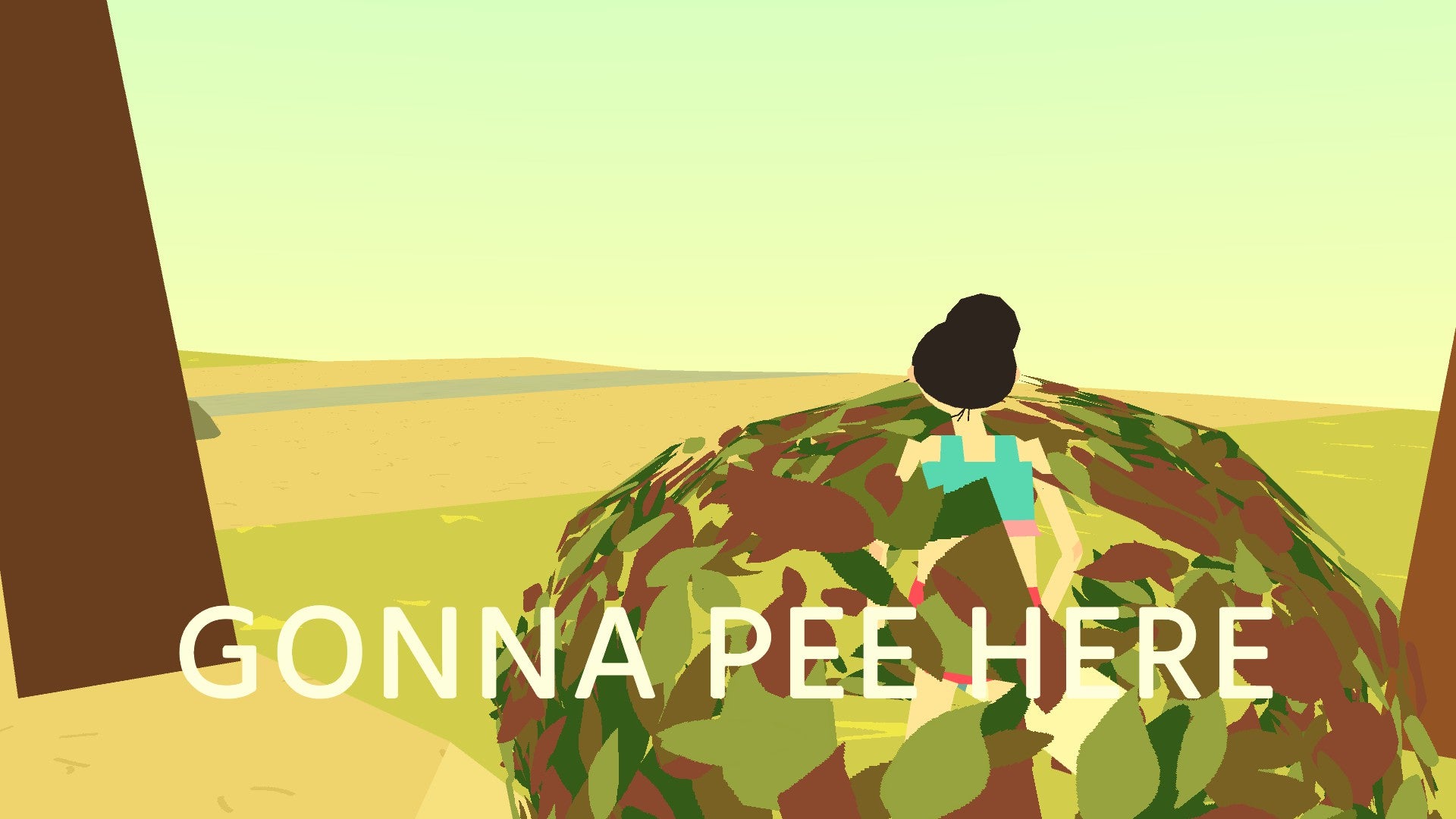 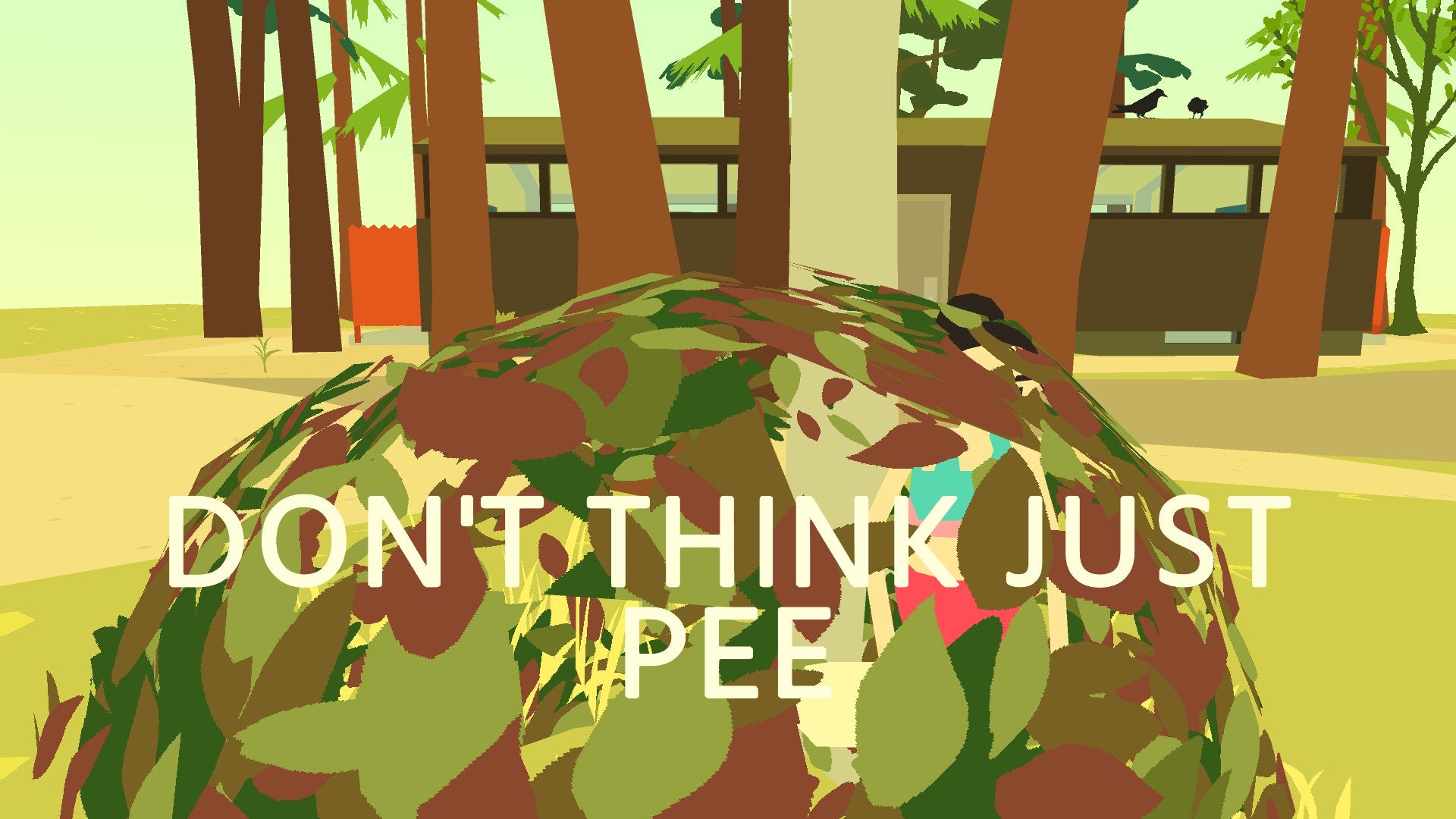 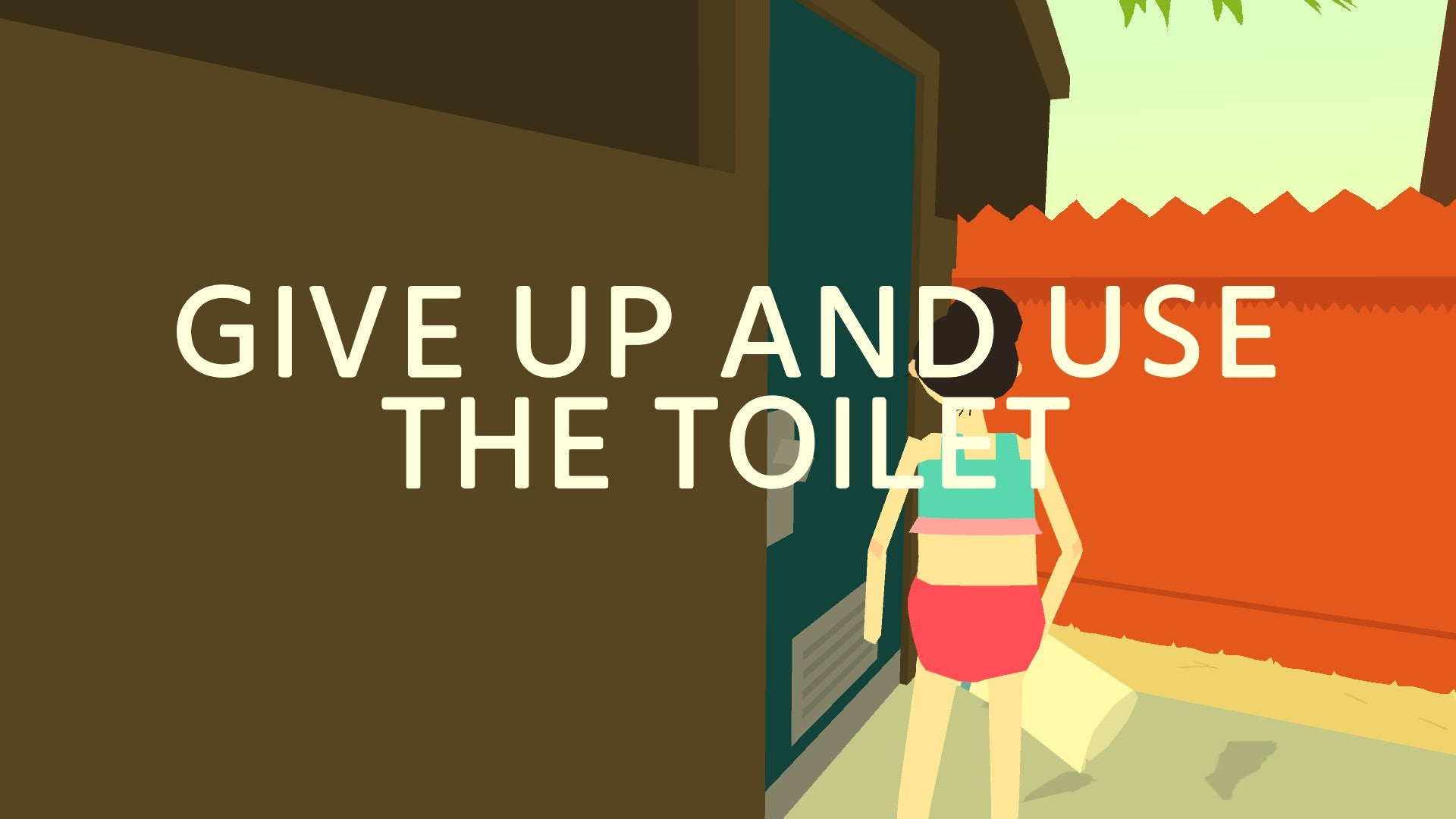 “PEE IN THIS BUSH,” says one message. “GONNA PEE HERE,” says another. “DON’T THINK JUST PEE,” says the last. If you approach the bathroom door, there’s an additional message that reads, “GIVE UP AND USE THE TOILET.” All the while, a series of more conventional dialogue screens convey that Mord is in her own head, trying to project an air of don’t-give-a-fuck teenage try-hard weirdness while also realising that peeing outside is awkward and somebody might see her.

This scene is extremely funny. The whole game is. Dialogue flows naturally, albeit with a snarky tone that hearkens back to games like Night In The Woods. It makes sense, given the context. These are just regular people messing around in the woods, trying to break the ice of strained familial bonds and new connections (Brad and Cloanne barely know Ben) with jokes and casual banter.

But over time, everybody digs deeper. Some minor spoilers follow, but only in this paragraph. In a particularly great scene, Mord ambushes Cloanne with questions about sex after a day of witnessing what, to her, appears to be a strong relationship between two grownups. In another, Cloanne and Brad have a tense discussion about whether or not they want kids, having done pretty alright with two teenagers for 24 hours. An especially inspired scene lands smack in the centre of the Venn diagram between comedy, character development, and horror, with everybody sitting around the campfire as Ben tells an increasingly gruesome tale about rats that emerged from his sink. Every few lines of his story, you regain control of the camera, at which point you cannot select other characters to hear their dialogue, but you can swivel around to see their facial expressions, which grow more surprised and horrified as the story goes on – except for Mord’s, which widens into a smug grin, because she’s heard this one before, and she adores how Ben tells it. It’s just a super sweet, clever moment in which Ben comes out of his shell, and everybody else is like “fuck yeah” in their own ways. 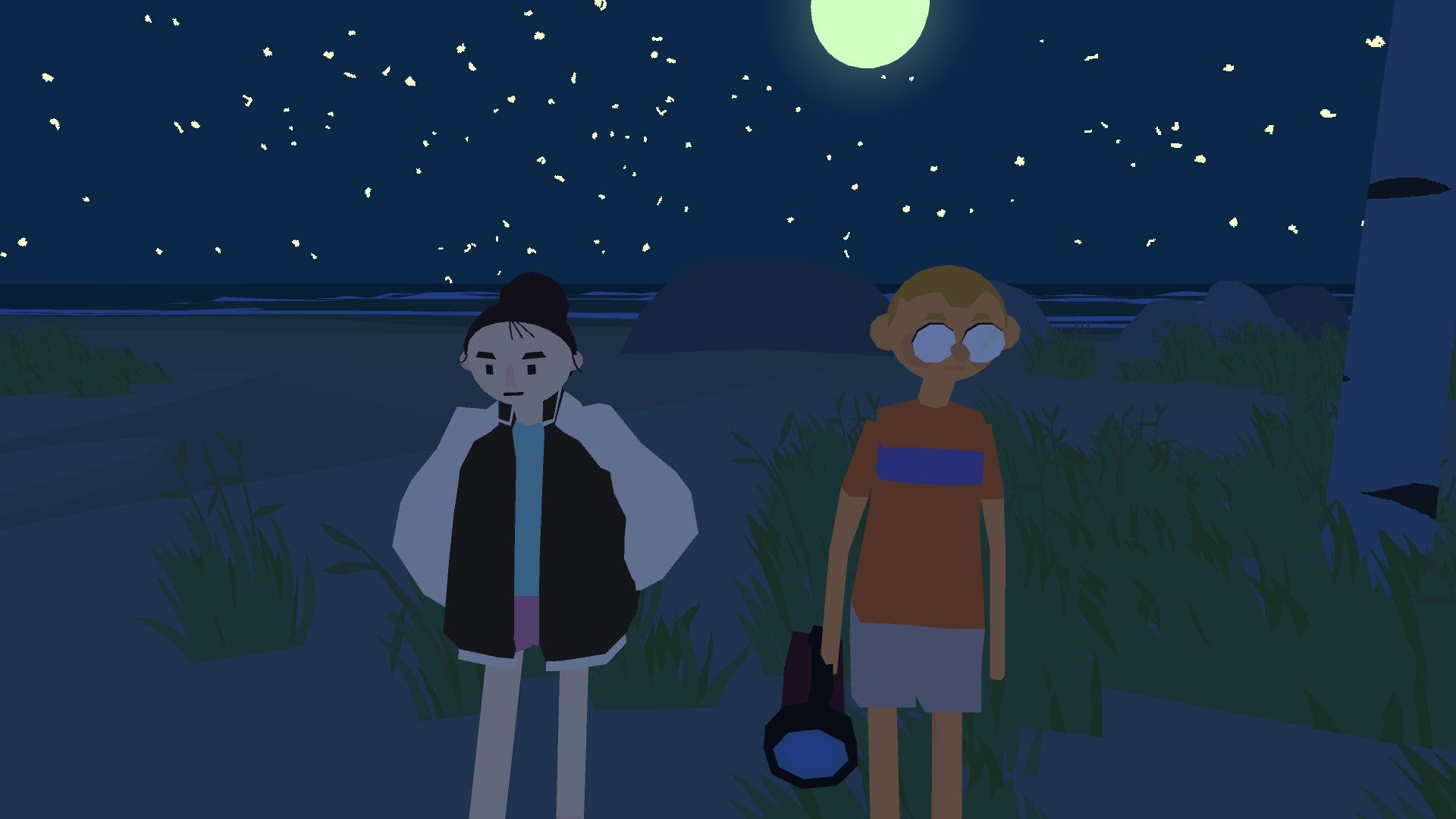 Wide Ocean Big Jacket isn’t long, lasting for just 60-90 minutes according to its developers, which matches my experience pretty well. It is, in my opinion, a rare example of a game that is the perfect length. It’s like a camping trip: a brief escape that gives you a little extra space to think, breathe, and laugh. The game’s form mirrors this. Each forested space looks vast, but it’s not. Invisible barriers give way to endless expanses of purgatorial nothingness. You won’t get lost in these woods. Instead, the goal, I think, is for them to feel like cosy rooms – trees that hug rather than suffocate.

In one scene, Ben and Cloanne turn the subtext into text. Ben, after waking up earlier than anybody else and getting a fire going, says to Cloanne, “I’m having fun. It feels like a tiny little life... Like I’m living a ‘Full Life,’ but just smaller. Like my ‘Real Life’ is out there and is big, but here is a different, smaller life.” Initially, Cloanne is confused, but then Ben pours her some coffee. Now, she says, she gets it: “When you’re camping, the campground becomes your whole world, and the campsite is like your place in the world, like your house or your town. So it’s all kind of... squished? What’s the word?” “Condensed!” replies Ben. “Exactly!” “Interesting thought,” says Cloanne. And then they just chill out and enjoy their tiny little life until the others wake up and join them.