Temtem Takes the Pokémon Formula Online, But Doesn't Do Much With It

The first time I met Temtem’s monster-bequeathing hot dad science lad Professor Konstantinos, I immediately began calling him Professor Oak. Just now, I had to look up his real name for the purposes of writing this piece. What I’m saying is, Temtem is a whole, whole lot like Pokémon.

That is not a bad thing, and the inspiration is something the developers have confirmed and embraced. Temtem, which came out in early access on Steam last week, is Pokémon, but with a roster made up entirely of brand new monsters (#dexit #neverforget #actuallypleaseforget) and MMO-like online functionality. What this means, in practical terms, is that while you’re on your kid-tested, professor-approved monster-capturing quest, you can see a bunch of other players running around doing similar things.

On one hand, this lends a more organic feel to the game world; no longer are you the sole Special in this setting, the lone competent trainer on a continent of floundering morons who captured three Magikarps that they refuse to evolve and decided to call it a career. But on the other, locations still largely feel like they’re intended to exist in a linear single-player Pokémon game, so you might, say, wander into some random NPC’s house, only to find it overflowing with other players who are running in circles, spamming emotes, and mobbing the NPC in question. I found this hilarious when I encountered an NPC who told me to scram because he was studying for a test and needed some peace and quiet, but it also strained credulity more than a little bit.

Currently, there isn’t much in the way of social features that take advantage of the endless conga line of players snaking their way through the game world, either. You can trade and battle other players, but communication tools are limited – there’s no general chat or anything like that – and other players don’t really factor into your story or quests. For the most part, you’re on your own adventure, capturing Temtems and going on basic, unspectacular fetch quests, and other people are also just kinda there.

The most fun I had with multiplayer is when I grouped up with my partner, who calls the game “Fauxkemon” yet for some reason thinks I’m in the wrong for naming my character “Weeb Lord.” By default, all Temtem battles are two-on-twos, and if you’re playing co-op, each player has one monster on the field at a time. This means you can strategise when it comes to type advantages and ability synergies, or you can squabble about who gets to toss a Temtem card, which is totally not a Poké Ball, at a weakened Swali, which is totally not a Metapod (if both players choose to throw a card, they’ll collide in midair and cancel each other out). If you’re looking for a chill, nostalgic way to hang out with a friend and mash some monsters, you could do worse than Temtem.

For now, battles are one of the handful of areas where Temtem is really a cut above a standard Pokémon experience. Animations are smooth and detailed, the difficulty level is a little higher, and while the battle system is extremely familiar, a few twists force you to vary up your tactics. First, there’s the aforementioned two-on-two element, which opens up ample opportunities for ability combos and strategies that are more proactive than reactive. 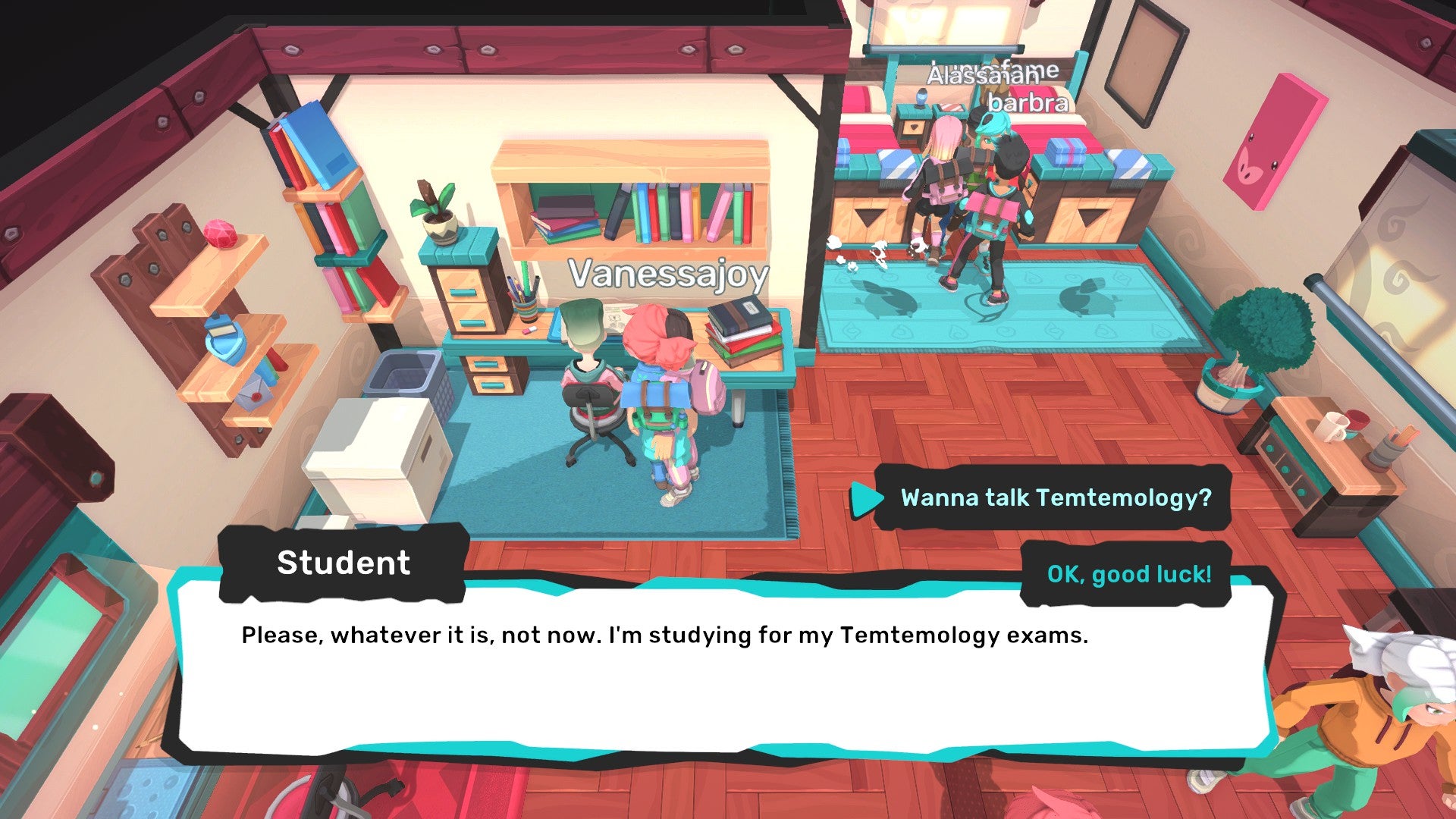 Second, while Pokémon’s cute, cuddly demigod-like abilities are limited by the number of times they can be used, Temtems have stamina meters. Each attack requires a different amount of stamina, so while a basic scratch or bite might take just a few points, bigger, flashier attacks can leave your monsters sweaty and drained. Use up enough stamina, and your Temtem might even have to rest for a turn to recuperate. If you so choose, you can override this system and unleash an attack even when your Temtem’s stamina meter is close to empty, but it’ll hurt itself in the process and have to take a break immediately afterwards. It’s a viable strategy, but if you decide to do it frequently, just know that the Pokémon cartoon series contains, like, 12 Very Special Episodes about trainers like you.

It’s good that battles are more interesting than standard Pokémon fare, because they happen a lot. Routes between cities are crawling with random encounters and trainers – the former of which, especially, can become tedious after a while. Monster designs are cute and fun but lacking in their own distinct identity. Put another way, if you showed me a lineup of five Pokémon and one Temtem, I would only be able to pick out the Temtem through sheer luck. Temtems’ designs also aren’t as elegant as those of many Pokémon; it can sometimes be hard, at first glance, to tell what elemental type a Temtem is. Don’t get me wrong: I love the feeling of discovery that comes with cataloguing an all-new monster roster that has nary a Pikachu in sight, but it’s frustrating to find out that my attack did half-damage not because I didn’t think it through, but because I just couldn’t tell what exactly I was up against. 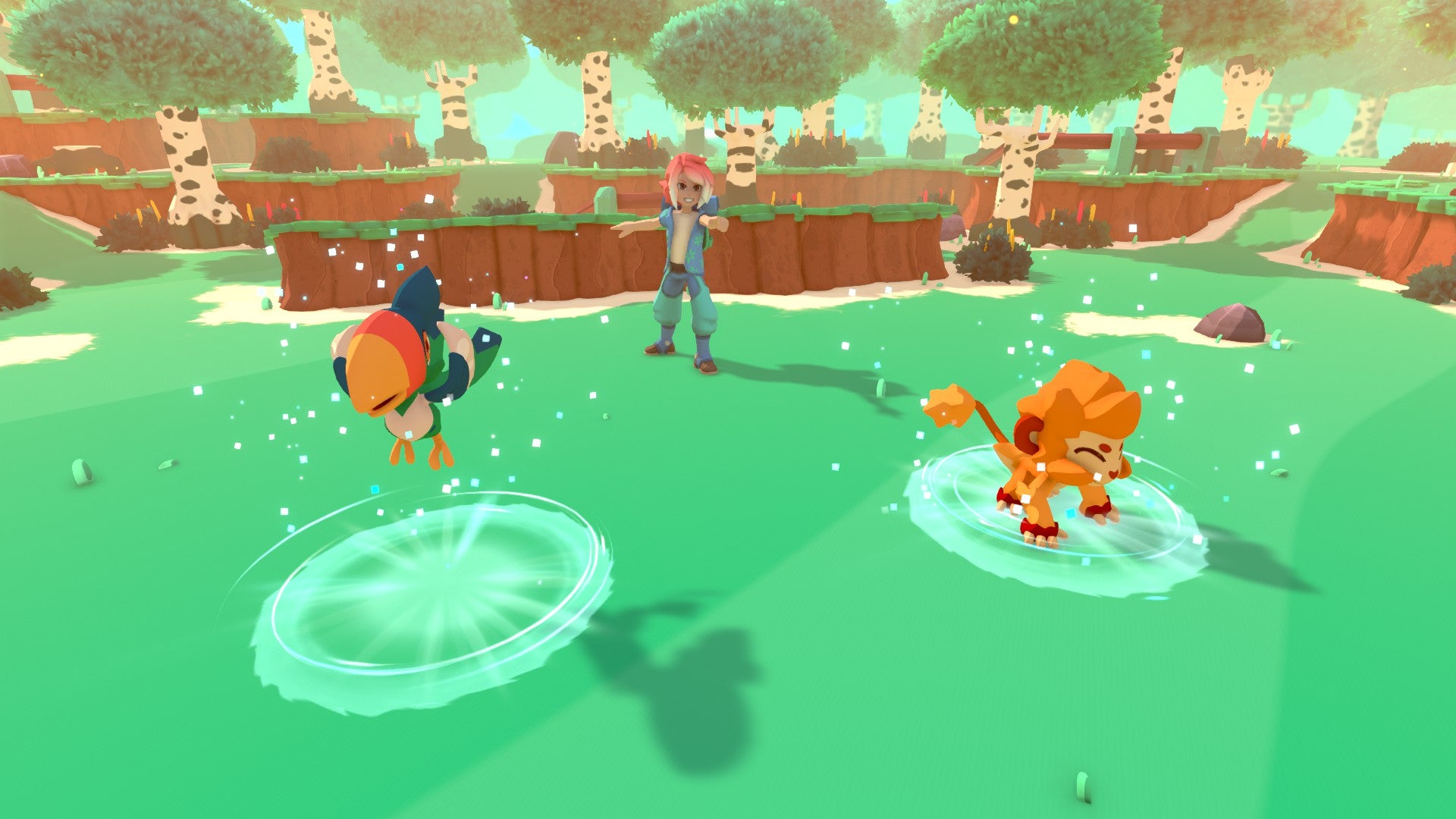 I’d be remiss if I didn’t mention that in its current state, Temtem is pretty unstable. I’ve played for a few hours over the course of the past couple days, and I’ve encountered an apparently common bug where you can’t progress past the game’s opening splash screen on three different occasions. What I’ve been able to play has actually felt pretty polished, albeit sometimes laggy, but I’m never sure if I’ll be able to get into the game.

As far as Pokémon clones go, Temtem shows promise. I’m not sure its marriage of a straightforward Pokémon-style adventure and a whole mess of other players is the way to go for a full-fledged Pokémon MMO, but it at least takes a respectable swing at giving the series a multiplayer makeover. It also stirs some interesting new ideas like a stamina system and a more robust breeding system into the Pokémon formula, which at this point is so calcified that it has a pudding skin on top of it. Temtem is still in early access, though, so I’d recommend taking a wait and see approach until it’s a bit less buggy and maybe has another area or two to explore.