I Love Watching My Buff Hoplites Wreck People in Magic: The Gathering's Theros Beyond Death Expansion

Magic: The Gathering’s big Theros Beyond Death expansion is full of woodland satyrs, brooding cyclops, bronze-shielded warriors, and cruel, twisted gods. After her long sleep was disturbed by the nightmare-weaver Ashiok, the fierce and righteous planeswalker Elspeth Tirel has escaped from hell to exact her revenge against Heliod, the sun god Fortunately, you don’t actually need to understand what any of that means to start having fun.

Released last Friday in Magic: The Gathering Arena, the new expansion takes players back to Theros, a Greek-mythology-themed plane that combines the fantasy of giant Krakens and magic fleeces with the calculated logic and order of geometric proofs and star charts. The cards are lovely, full of bucolic groves, sun-soaked marble buildings, and people decked out in soft robes and shimmering armour. The mechanics are easy to wrap your head around while still having deeper implications for those who love to get way into the weeds of theory-crafting and deck-building. 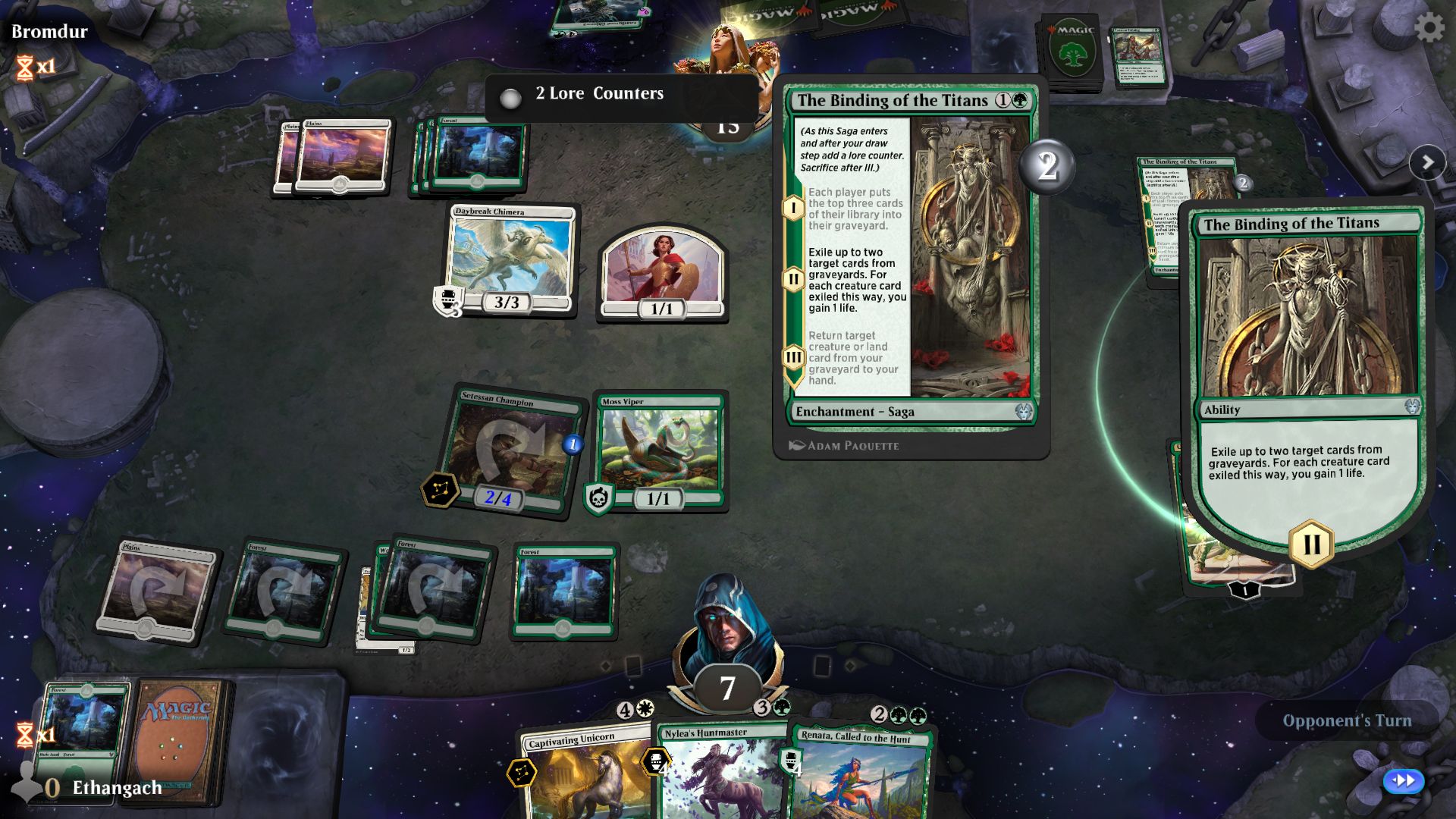 I am decidedly not one of those people, but that didn’t prevent me from fumbling my way toward a pretty decent deck in a sealed draft that allowed me to go four and three before my lack of heavy hitters caught up with me. Playing a white-and-green deck, my strategy was mostly creature-based, but thanks to returning card abilities, fights came down to more than just who was able to get bigger monsters on the board faster.

Most cards in Theros Beyond Death revolve around the following mechanics:

Sagas have a controversial reputation for being overpowered, but I’ve always enjoyed them because for me, Magic is first and foremost a game about having fun with bonkers lore. Take the Elspeth Conquers Death saga. The first step lets you exile a target permanent on the board your opponent controls, the second makes noncreature spells more expensive for the opponent’s next turn, and the third lets you return a creature or planeswalker from your graveyard to the board with a plus one or loyalty counter on it. It gamifies the narrative of Elspeth’s return from the underworld, and thanks to Arena’s cool animations and lighting effects, it feels like you’ve unfurled a prophetic scroll telling your opponent they’re screwed. 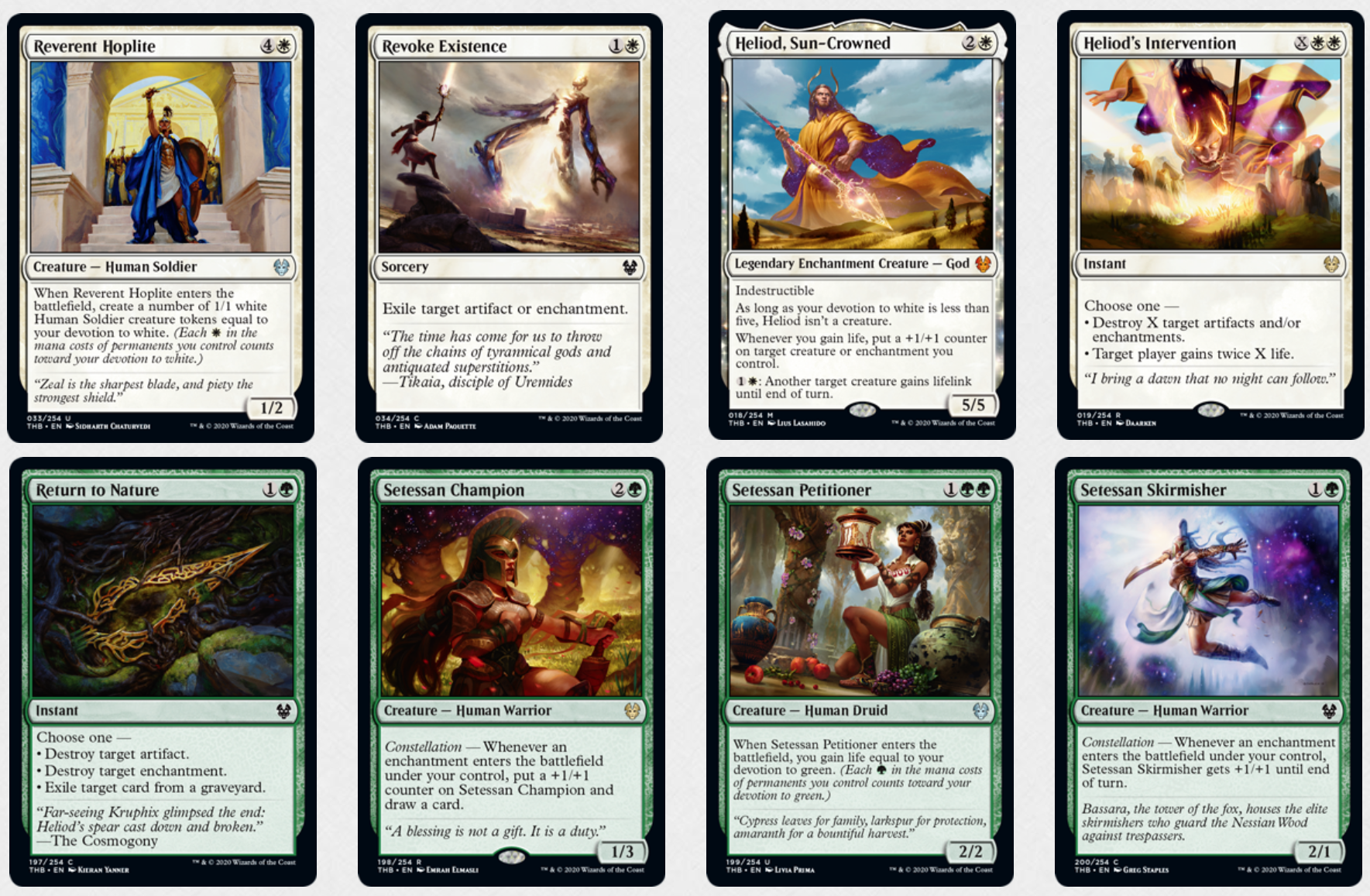 Sagas and other enchantments are also a lot more useful this time around with the return of Constellation, an ability that triggers whenever a new enchantment comes into play. Traditionally, enchantments that buff creatures have been costly investments since they go away if that creature dies, but Constellations help mitigate that.

For example, whenever Constellation is triggered, Setessan Champion gets a plus one counter, while Nexus Wardens give you two additional life. When paired with creatures that are themselves enchantments and give you an extra plus one counter every time you’re healed, like Heliod, Sun-Crowned, things can start to snowball. The most fun I’ve had in a match yet was pairing these cards with Daxos, Blessed by the Sun, which heals you every time you play a new creature, followed by Reverent Hoplite, which gives you as many 1/1 human soldier tokens as your total Devotion to white (the number of white mana symbols on the board under your control). The result is a white enchantment deck that all of a sudden is operating like a more dynamic siege engine. Theros Beyond Death has strong thematic underpinnings too. Devotion plays off Greek polytheism and treats faith as an accruable resource to alter events in the material world. Escape treats death as the imprisonment of the body rather than its destruction. “I’d rather slave on earth for another man –  / Some dirt-poor tenant farmer who scrapes to keep alive – than rule down here over all the breathless dead,” a deceased Achilles tells Odysseus in the Odyssey. While Theros’ Achilles card, Haktos the Unscarred, doesn’t have Escape, plenty of other cards in the set come with the option of a do-over the tragic hero longs for.

Magic’s fantastical, dimension-hopping worldbuilding has always been a big part of what makes the highly structured game so appealing. Players spend dozens of hours trying to master arcane new rules and their exceptions in order to, at bottom, make their dragon, or wizard, or mutant cyborg zombie more powerful than someone else’s. But that duality between order and chaos feels more elegant in Theros than in many past sets, and Arena remains a better vehicle than ever for navigating it.