A hybrid first and third-person shooter starring a gruff-talking cat-looking bounty hunter armed with a crossbow that fires living creatures, Oddworld: Stranger’s Wrath is an outlandish gem, whether you’re playing the 2005 Xbox original or this week’s HD remaster for the Nintendo Switch.

The oddest game in the Oddworld series, which started with 1997’s puzzle platformer Abe’s Odyssey, Stranger’s Wrath put a Western spin on developer Oddworld Inhabitants’ alien planet. Instead of freeing put-upon species from the evil machinations of exploitative corporations as the heroes did in earlier Oddworld titles, felinoid Stranger hunts outlaws in the wild frontier in order to earn money for a life-saving operation. Themes of environmentalism and species exploitation might sneak in later, but at first it’s just a mysterious furry man and his ridiculously wondrous weapon. 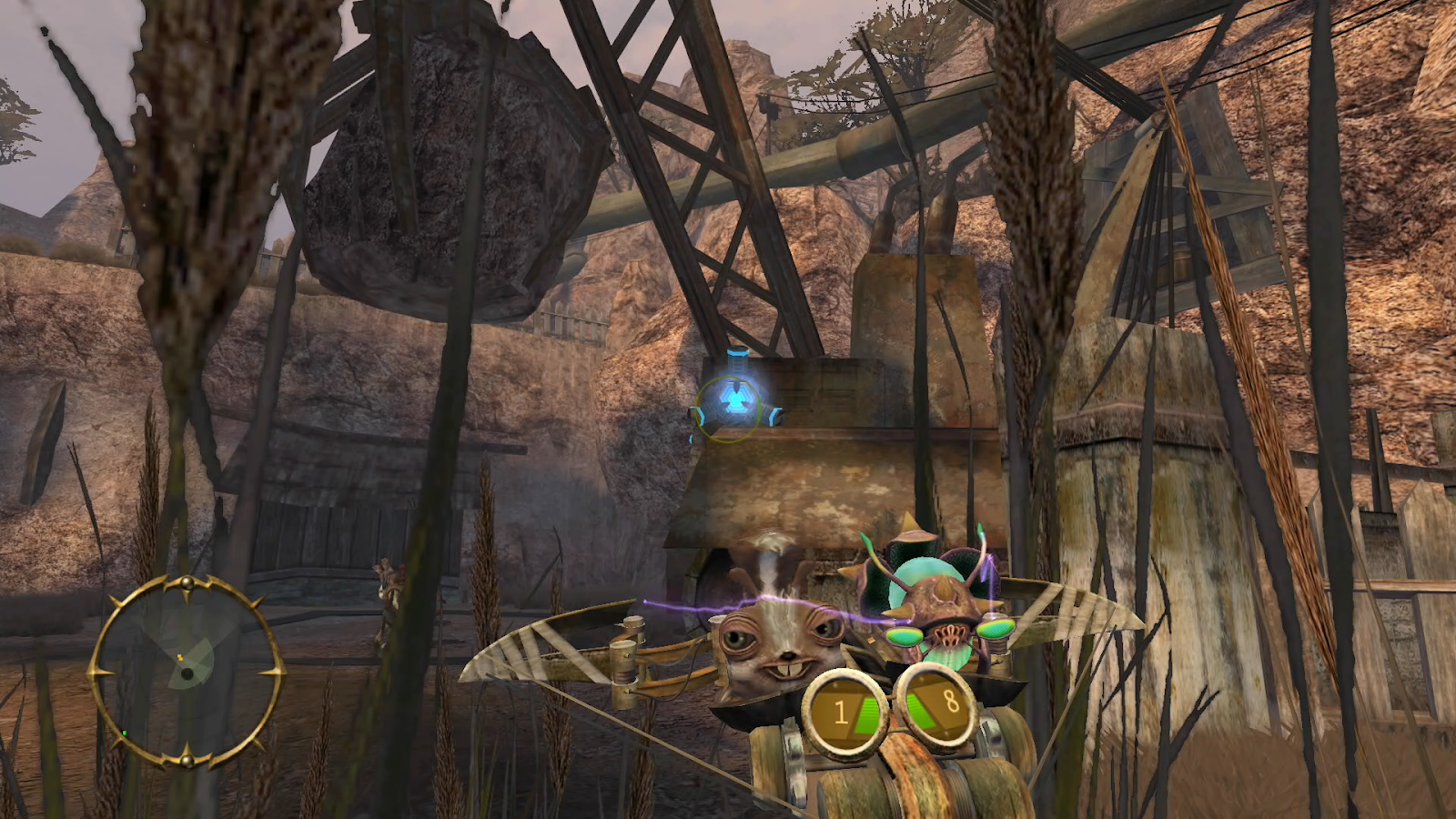 Guns exist in Stranger’s Wrath, but Stranger eschews them. His weapon of choice is a dual-chambered crossbow that fires literal live ammunition. As our hero wanders the land hunting bounties, he picks up small creatures that can be fired from his crossbow, resulting in various effects. Spidery Bolamites wrap enemies in webs, temporarily incapacitating them. Chippunks attract enemies, making them perfect bait for traps. Zappflies carry an electrical charge that can be used to activate switches and zap bad guys.

The crossbow would be cool enough, but Oddworld: Stranger’s Wrath isn’t just a first-person shooter. Pressing down the thumbstick on the right Joy-con swaps between first and third-person view. In third person, the game works like a 3D platformer. Stranger climbs ropes, double-jumps across chasms, and sneaks through tall grass. Due to his unique nature, he can drop to all fours in order to cover long distances quicker. He’s a very versatile hero.

What makes Oddworld: Stranger’s Wrath so weird and wonderful? A large part of it is the setting, this weird alien planet that game director Lorne Lanning and his team continue to build. It’s filled with comedic creatures of all shapes and sizes, strange creations and contraptions that would be out-of-place in any other game but somehow work here. The graphics, while sharpened considerably compared to the original Xbox game, still feel dated, especially in pre-rendered cutscenes, but they work out given the rough and tumble setting.

But the best thing about Oddworld: Stranger’s Wrath is how well the different gameplay styles mesh together. Shimmying up ropes and leaping onto ledges in third-person, then quickly shifting into first-person to fire off a couple vomit-inducing skunk creatures – when it all comes together, it makes for a beautiful hybrid.

Last I heard from Oddworld Inhabitants, the team was working on a reimagining of the second Oddworld game, Abe’s Exodus. Maybe after that they’ll dig in on some sort of sequel to Stranger’s Wrath. Until then, the original will do me just fine.