5 Hours in, Dragon Ball Z: Kakarot is Not the RPG I Was Hoping For

I’ve played Dragon Ball Z: Kakarot for five hours so far, and it appears to be part fighting game and part fetch-quest generator. Mostly it’s a rehash of the source material that almost anyone who will be interested in the game will have seen performed half a dozen different ways.

Trudging through the beginning of this game feels like finding a stack of Dragon Ball Z manga in a dumpster and being really excited and taking them home and then realising they’re all torn up and the pages are stained and stuck together and smell like mildew. Do you throw them out? Try to clean them? Shove them in a box deep in a closet and then forget about them until it’s time to move again?

A small part of me looks through the heap of Dragon Ball Z lore and nostalgia assembled in Kakarot with the morbid fascination of a 10-year-old who watched Gohan and Krillin toil away on Fake Namek for months, eagerly awaiting the next round of dubbed episodes to finally drop. The rest of me is furious that I’m watching Goku spare Vegeta’s life just so he can go massacre more innocents yet again like I’m trapped inside anime Groundhog Day.

Kakarot comes out today on Xbox One, PS4, and PC. In my time playing it, I’ve felt at various points intrigued, unimpressed, and hopelessly defeated. But more than anything I’ve been shocked at how aggressively sub-par the series’ transition to a full-fledged RPG appears to be. Dragon Ball Z games have had RPG-lite elements for years, including character creators, level progressions, and vast inventories of gear to manage. Kakarot is not so much a transformation of those ideas into something like Dragon Quest starring Goku. It’s more like the latest, aimless iteration on the cynical thought experiment “how many times will players pay to re-experience their favourite childhood anime?”

Kakarot begins with Goku and his son out on a morning stroll through the woods. After Goku completes a short image training fight against Piccolo during his meditation, the game switches from a 3D real-time action fight to a small open area where he can run around. Spaces like these where Goku (or whichever other character the player happens to be controlling) can explore, collect food and items, and even get into fights with other enemies, are the core of what is supposed to make Kakarot feel like an RPG. Rather than move from cutscene to fight and back to cutscene again as in past games, this wandering around offers opportunities for grinding, doing side-quests, and experimenting with things like fishing and cooking. 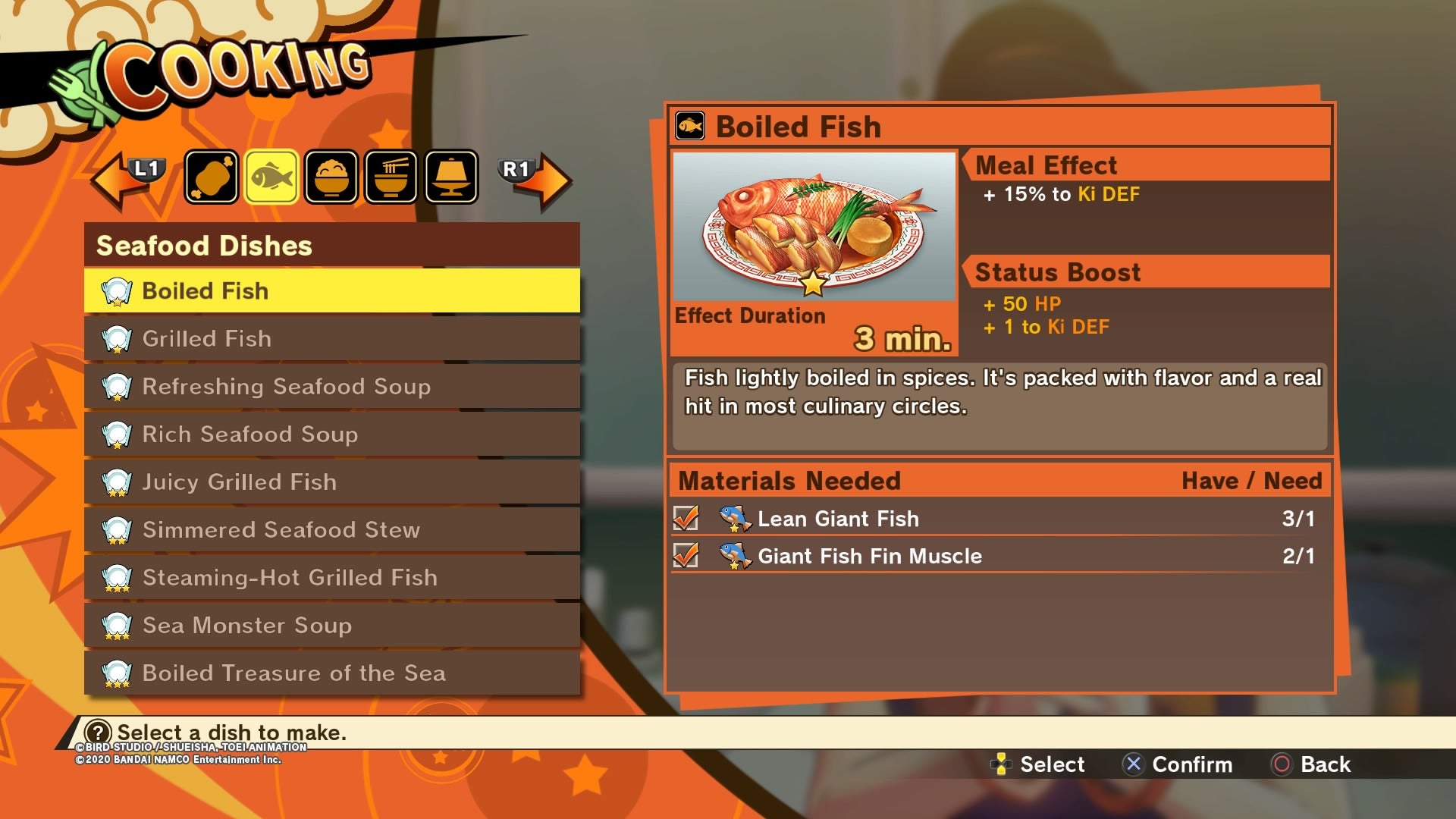 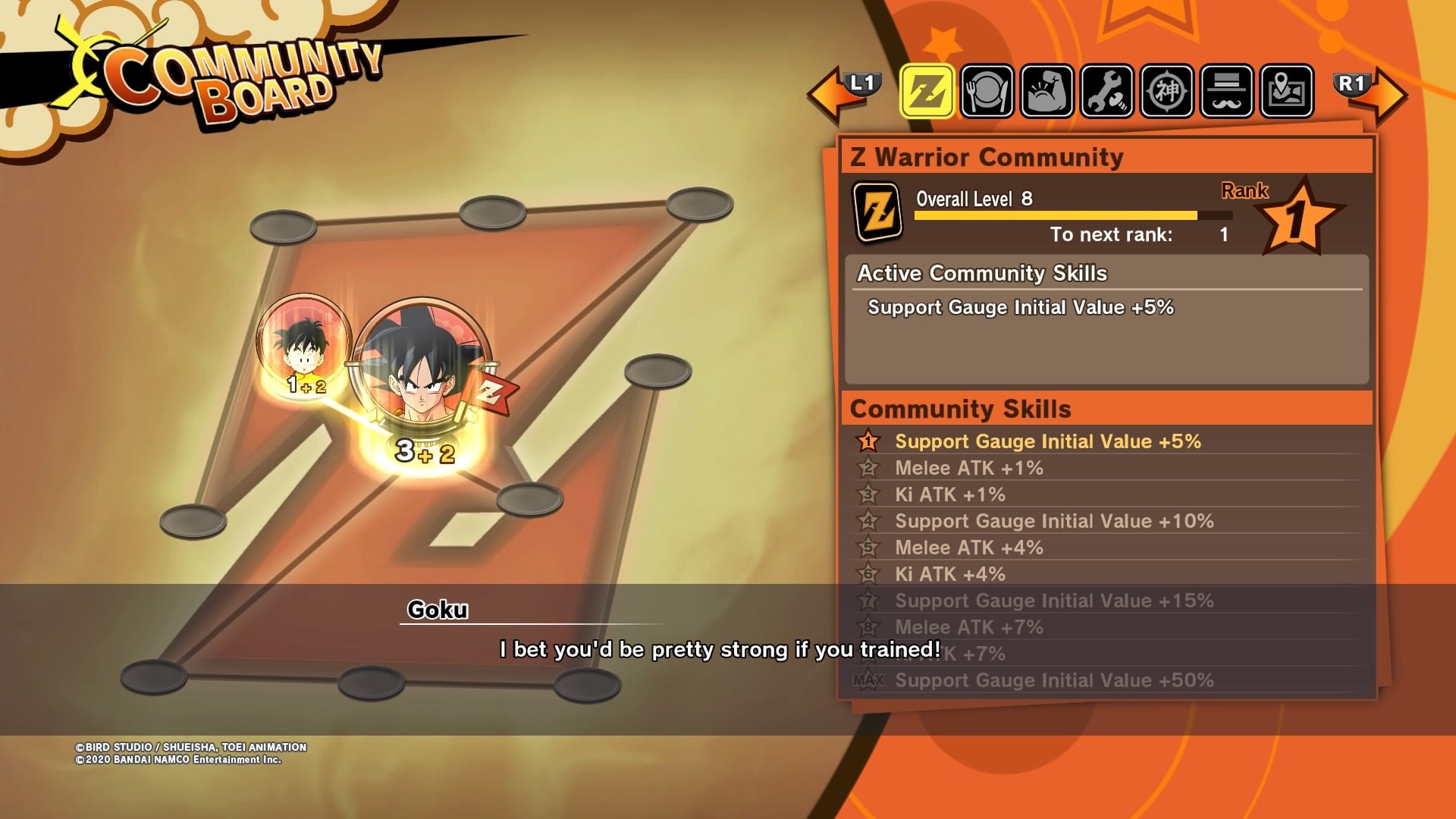 Unfortunately, each of these elements is so haphazardly cobbled together that playing Kakarot doesn’t feel like living in a place where houses can fit inside capsules and orange rocks bring people back from the dead so much as being a tourist in a chintzy Dragon Ball Z theme park. Side characters lurk around every corner, sometimes engaging in conversation, rarely with any larger purpose in mind, seemingly situated as greeters to remind you that you are totally in the Dragon Ball Z universe and not just an oversaturated grassy plain. Flying around as Goku feels unnatural, like controlling a helicopter instead of a person, and a thin invisible barrier stands between characters and the ground at all times, making everything feel like a wooden theatre backdrop whose edges occasionally gobble you up as Goku or whoever else you’re controlling chides themselves for going out of bounds.

There are orbs to collect, which can be used to upgrade skill trees used to unlock and power-up characters’ iconic movesets. In practice, collecting them feels like playing an imitation of a Sonic mini-game. Glowing spots around the map indicate apples, fishing bait, and other detritus that can be collected to prepare meals to boost stats. There are also community boards situated around the map, which display little matrices where you can place character tokens that are acquired as the story progresses. These tokens’ innate attributes and complimentary synergies bestow bonuses like extra money, stronger attacks in a fight, or boosts to base stats. The community boards are like organisation charts with shiny stickers, and in the end are a poor substitute for a numbers game attached to actual character relationships and side-conversations. Dragon Ball Persona this is most certainly not. 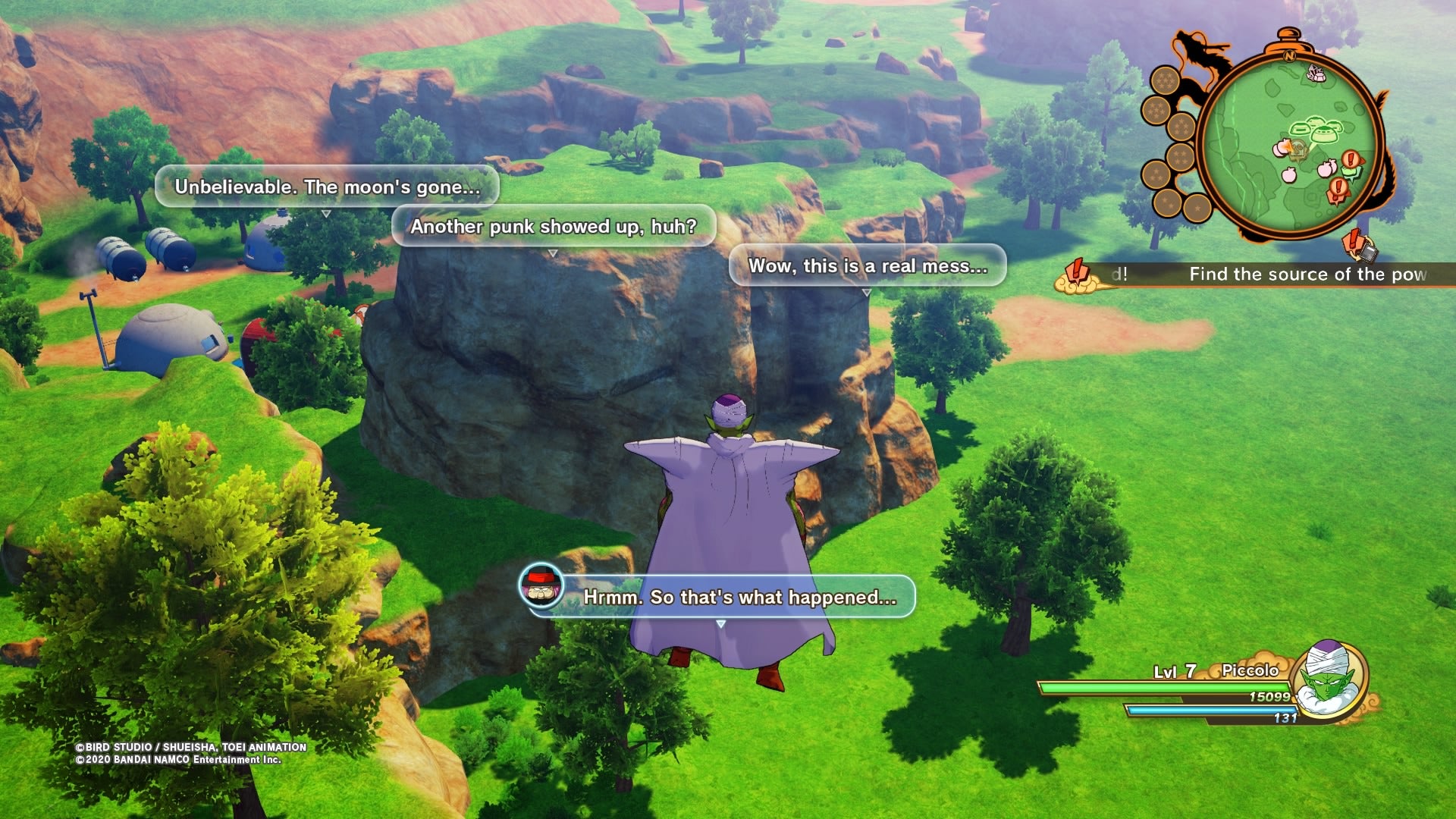 Combat so far hasn’t been a bright spot either. It mostly consists of mashing the attack button and then following up with a technique, followed by blocking and dodging until the next opening. Movement also still has the residual clunkiness that seems to accompany every attempt to have characters who can fly duke it out in 3D, but without the depth of a more combat-focused game like Xenoverse to make up for it. It almost makes me wish Kakarot were turn-based to save me the effort of having to manoeuvre through what otherwise feel like the traditional rhythms of an RPG encounter consisting of attack, attack, heal, block, repeat.

According to Famitsu, the main path through Kakarot is an approximately 40 hour journey, with that number ticking up toward 100 when side-quests, collectibles, and other extras are taken into consideration. It’s possible that the best of what the game has to offer lurks deep off the beaten path of later acts in the Cell and Buu Sagas. But based on what I’ve played so far, I’m less confident in that than before I started.