Remembering The Sad Sharks And Dolphins Of GTA San Andreas

When I was younger, about 14, I remember jumping into the waters of Grand Theft Auto: San Andreas, swimming around and exploring. I did this a lot. I had been playing San Andreas, at that point, for months. And then, I saw something strange. I thought I saw a shark. Digging around online for info it seemed nobody was sure if sharks were in GTA San Andreas. People knew dolphins were in the game, they were very common. But sharks? That was up for debate.

What isn’t up for debate in 2020 is how daft and sad these sharks and dolphins look in Grand Theft Auto San Andreas. Even back in 2005, I was laughing at them.

Today, Grand Theft Auto V is filled with incredibly detailed and lifelike animals. Stuff like whales, sharks, dogs and rabbits all exist in the game and can be found, killed or photographed by players. But back in the old days of 2004, wildlife was a lot less common in GTA games. There weren’t even birds in the skies of GTA games until Vice City’s seagulls. The world of GTA 3, which came out a year before Vice City, was just a barren city filled only with people and cars.

When Vice City came out, things changed. As mentioned already, birds became a part of the world. But there was also some sea life added to the ocean waters. Players could spot dolphins and sharks below the waves. From a distance these sea creatures looked fine, but if you got close to them or found a clear part of the ocean, you would discover how sad these creatures were. 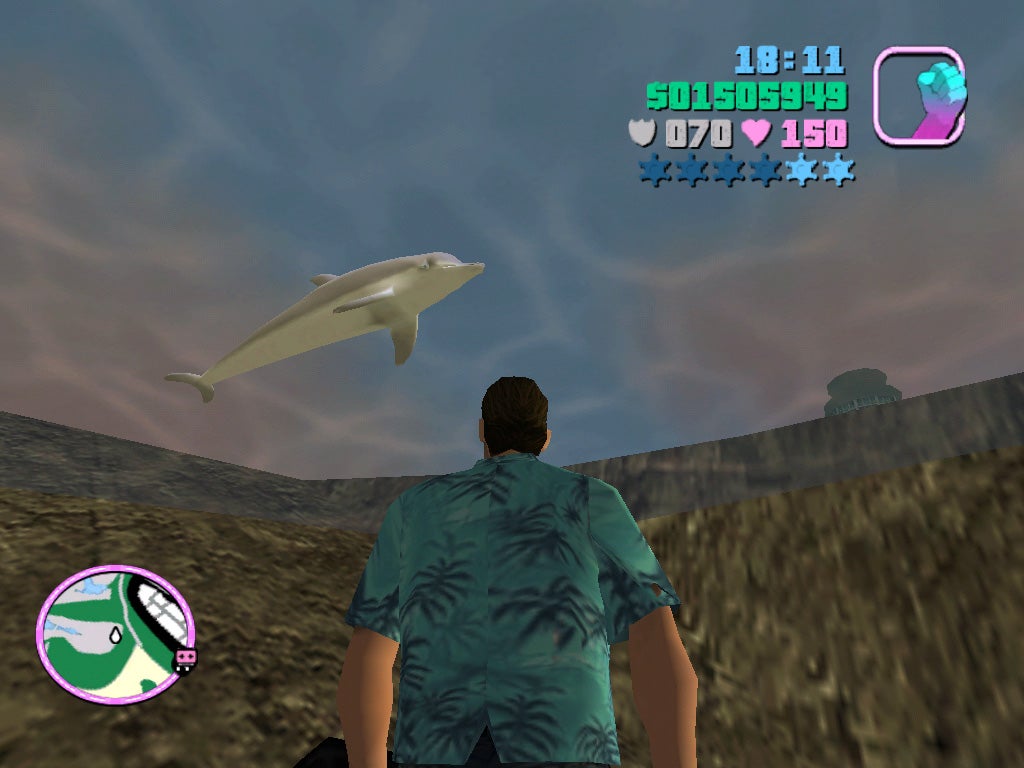 Using mods to get a better look at a Dolphin in GTA Vice City. Screenshot: Ami-sensei (DeviantArt)

They don’t animate at all. They just move smoothly around the ocean. They look like something out of an early theme park ride. This was back on the PS2, but even teenager Zack back in 2002 thought these sharks and dolphins looked bad. I remember thinking it was cool that they put sharks in the game but wondered why they weren’t actually moving or anything.

The lack of animation and low-quality textures became even more apparent in GTA San Andreas, released in 2004 after Vice City. Now players could jump in the water and swim alongside these sea creatures, getting up close and personal with them.

Not long after San Andreas was released, a debate began to rage online. Back before people had pulled the PC port apart and learned everything about the game, people weren’t sure if sharks were in the game. On the one hand, sharks existed in Vice City, so why wouldn’t they be in San Andreas. On the other hand, players could spend hours and hours searching the oceans of San Andreas and not see a shark. Others theorised that sharks were just misidentified dolphins and that Rockstar removed sharks from San Andreas because it would be weird to let players swim with sharks.

Today, we know that both sharks and dolphins can spawn in GTA San Andreas. Dolphins are much more common. They spawn more frequently and most players will encounter a few of them if they play the game. Sharks are much rarer than dolphins. One player spent 16 days searching before they finally found a shark. 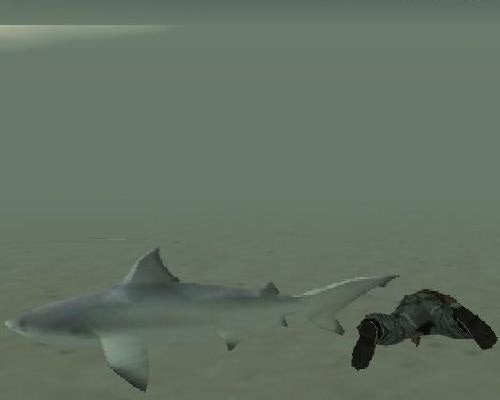 The shark isn’t any better than the dolphin. The model for the shark is bigger and looks different, but it also doesn’t have any animations or interesting behaviour. It just sort of scoots around the ocean, sometimes changing direction. But yes, sharks do exist in GTA San Andreas. Though the myth of killer sharks isn’t true. You’ll have to go to GTA V to get attacked by a shark.

All these years later, I still don’t know if I actually saw a shark in GTA San Andreas back when I was 14. At the time I didn’t even know if they were even in the game. Now, in 2020, I know they are, but I didn’t take any screenshots. Was the shark I saw, in reality, a dolphin? Possibly. Or maybe I was lucky and saw something extremely rare?

Regardless of whether young Zack did see a shark or not, I’ll never forget stumbling across these dopey looking sea creatures. They looked more like floating statues than actual animals, but they added something to the worlds of GTA Vice City and San Andreas.

Today, they still make me chuckle watching them coast around the digital ocean.