You Should Play Life Is Strange 2

The final episode of Life Is Strange 2, “Wolves,” released on December 3 for PC, PlayStation 4, and Xbox One. When I try to understand why people did not react with an open outpouring of excitement and glee for Life Is Strange 2 after the success of its predecessor, I think of Marvel movies. Superhero films strike me as an exercise in talking about the war on terror: Standing in for the United States is a human being with extraordinary power struggling to reach a conclusion on when and how to wield it. While some of these movies try to grapple with the politics of their worlds, the later movies don’t even try – they’re political if you squint but ultimately more about, for example, Tony Stark’s wonderful toys than his place in geopolitical conflict. Marvel Movies make unimaginable mountains of money, while Ang Lee’s Billy Lynn’s Long Halftime Walk, about a disillusioned soldier returning from the war in Iraq to appear at the Super Bowl, dies at the box office.

As far as I can tell, the sequel is the better game, but it’s a bit like staring straight into the slow-exploding supernova that is our political reality.

Back of the Box Quote: "I wish that I knew what I know now, when I was younger."

Disliked: Everyone looks like they're made out of wax.

The first Life Is Strange didn’t make you look at our world directly. Players looked at it through the eyes of Max Caulfield, a precocious teenager who stumbles upon a murder mystery and who also has the ability to turn back time. It went through a greatest hits of teen drama television shows: drug deals, teen suicide, the possibility of a LGBT romance. It was a surprise smash hit, and Life Is Strange 2 was always going to have to live in its shadow, even before it was announced that it would be an unrelated story with different characters. But Life Is Strange was always flawed, especially when it came to the moment to moment writing, which was cringe inducing at best, and its ending, which came down to a single binary choice.

In the first Life Is Strange, you were just making choices for Max. In this one, the choices you make not only affect Sean Diaz, the protagonist, but also Daniel, his younger brother who you’re raising. After the death of their father, who was shot by a trigger happy cop, and in the ensuing chaos, Daniel developed telekinetic powers, killing the police officer. Now the Diaz brothers are on the run, trying to make it to their father’s ancestral home of the fictional Mexican town Puerto Lobos. 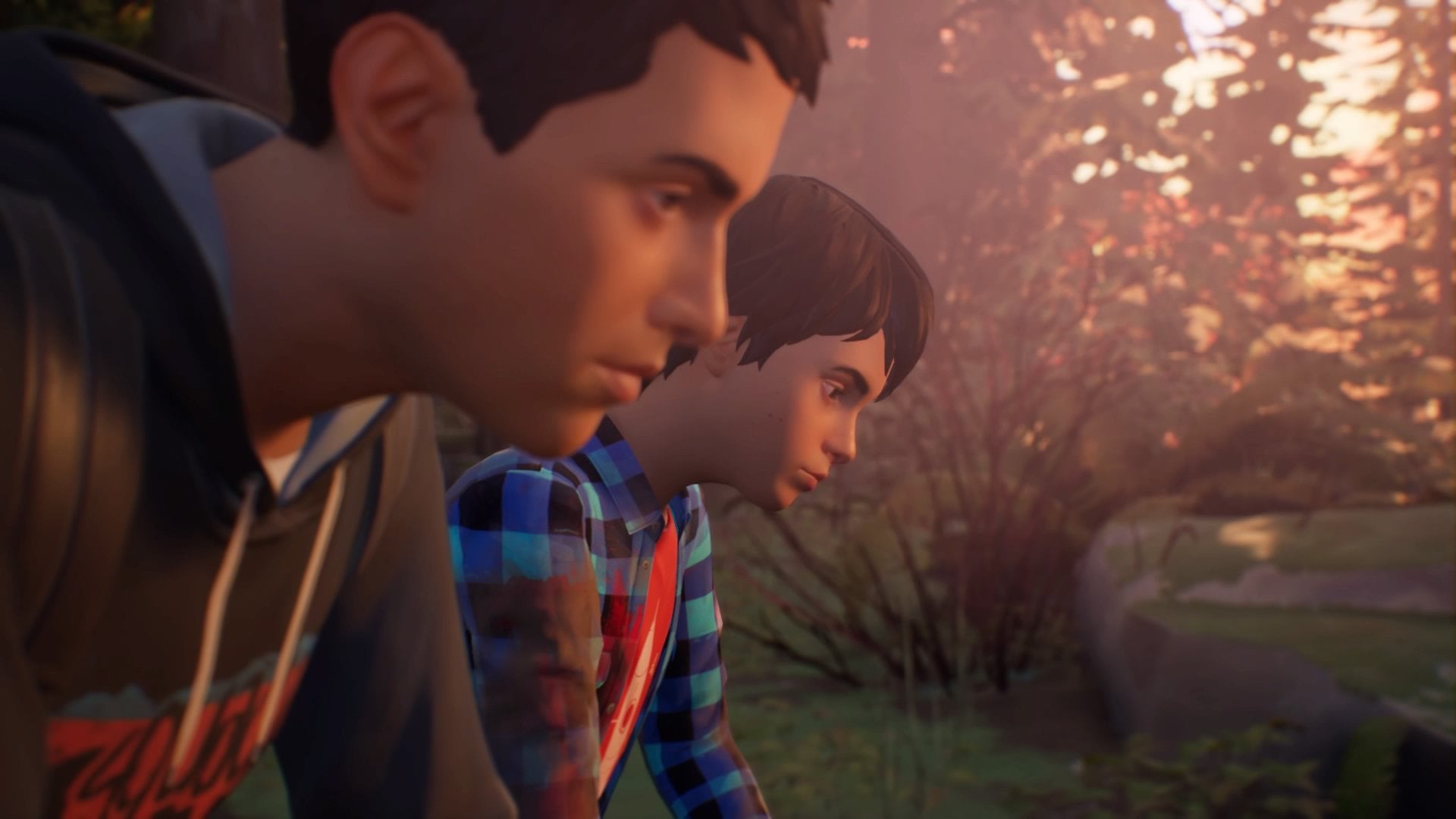 Life Is Strange 2 won’t let you not think about divisive, sometimes scary politics of the world we inhabit. This is a story of two children on the run from the law because they simply don’t trust our country’s justice system to not lock them both up and call it a day. The Diaz’s grandparents own a red hat with white writing whose text I couldn’t quite make out but was familiar enough. One of the crust punks they get to know ran away from home because he was going to be forced into conversion therapy. When Sean and Daniel make it closer to the border they’re waylaid by a couple of vigilantes that take it upon themselves to capture illegal immigrants.

Despite how sobering this story can be, it’s the connection to our world that gives Life Is Strange 2 its enormous heart. Every episode practically pleads with you to care about the kinds of people you’d normally overlook. In the panhandling crust punks, Sean and Daniel find allies and friends, and for Sean, maybe even love. The Arizona commune provides a respite for the weary brothers near the end of their journey, and a chance to meditate on what it means to be free. Had Sean and Daniel stayed put in their Pacific Northwest suburb, they would never have met these people, never created such strong connections with them. If there’s anything that Life Is Strange 2 wants to say, it’s that everyone in the world deserves dignity, happiness and love.

The most important thing that the sequel inherited from its predecessor in its writing is its almost embarrassing earnestness. In some cases, I felt like the characters were all but turning to the screen to say, “racism is bad.” At worst, it’s mildly corny. For the most part, it’s refreshing to see such candidness in an industry where getting the developers of military shooters to admit that their games contain politics is like pulling teeth. Life Is Strange 2 doesn’t offer much of an escape from the world, but that’s why it’s worth playing. 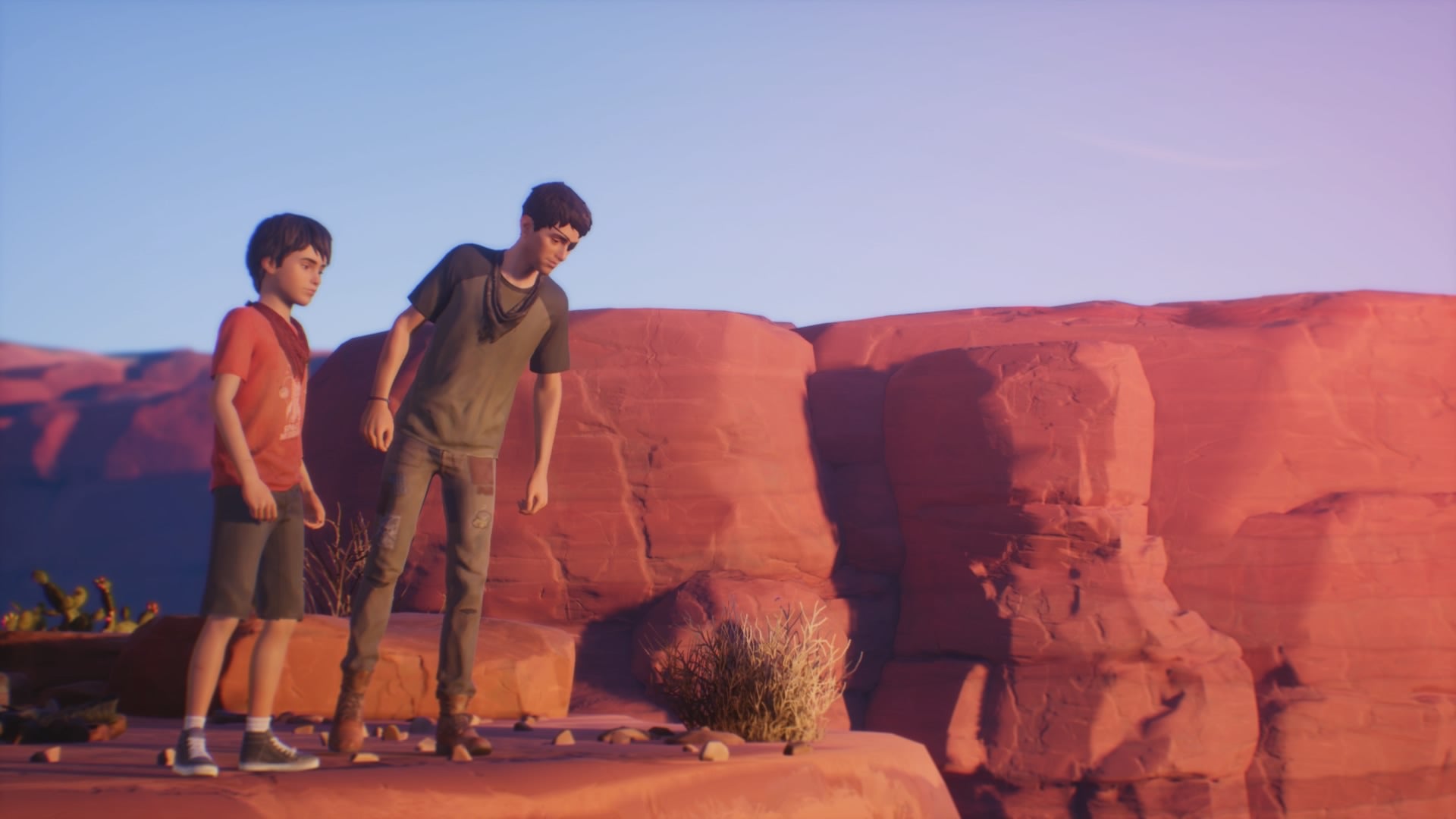 By the time I reached the end of Life Is Strange 2’s final episode, I had been on the brink of tears for hours. As I’d later discover, each of the seven endings of the game relies not only on the choices you’ve made as Sean but also on what you’ve taught Daniel. If you try to make a choice that runs counter to the morality you’ve shown Daniel through your words and actions, he can disagree with you and take a different tack. The ending I got is reflective of a Sean that taught Daniel to live within society’s rules, and the fate of the Diaz brothers seems appropriate for that story.

Still, I wonder if my ending would have been more satisfying if I had played more selfishly. There is nothing neat or comforting about the endings of these games, nothing so narratively pat as the end of the first game where Arcadia Bay remains relatively unchanged. This isn’t an allegory – this story asks its players to engage fully not just with the game but with the world it draws from. Life Is Strange 2 won’t provide answers, but the question is worth asking.