For years, developers at CCP have been restricted in the ways that they can play EVE Online by internal company policies that force complete anonymity for their characters. If a developer’s character name was ever found out by a regular player, they were forced to report themselves to Internal Affairs and undergo a ‘Witness Relocation’ process. This process forced them to leave any player corporations they might have belonged to with no warning, and to change their character’s name and portrait in an attempt to restore their anonymity. Soon, that process will change, and developers will be allowed to play EVE as themselves.

Required anonymity for EVE developers dates back to 2007, when EVE was still relatively young, when a developer who went by T20 was caught in a massive scandal. T20 belonged to one of the game’s largest and most influential in-game organisations at the time and was found to be using his developer account to spawn unique and valuable blueprints and sharing them with the player organisation he belonged to. Once this became public knowledge, players were outraged at the corruption of the sandbox and the blatant cheating by a CCP employee. In the aftermath of this scandal, CCP developers lost their ability to interact with players in the game without complete and total anonymity. 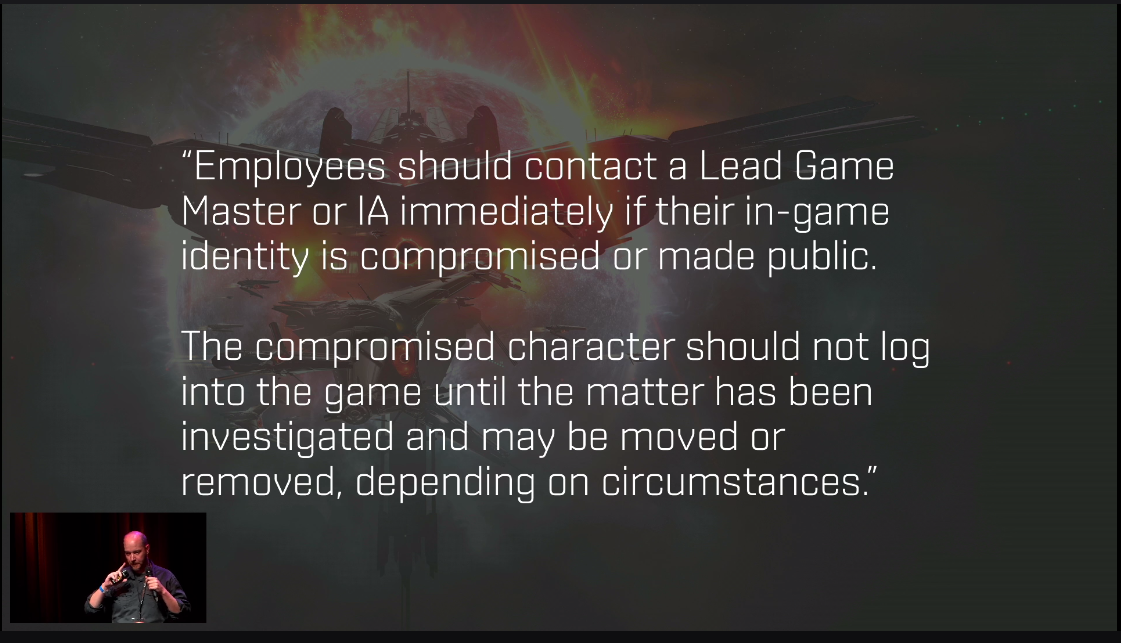 Anonymity is a unique problem in EVE. EVE groups often spy on one another, hoping to gain the upper hand in massive battles, expose enemy vulnerabilities, or to attempt to steal massive in-game resources from each other. This has led to a focus on counter-espionage techniques that can make anonymity hard to achieve when seeking to join a player corporation. Not talking on voice communications, not sharing personal stories, or using a masked or altered IP address can lead to scrutiny and distrust. This scrutiny can lead to exposing a game developer who might be trying to remain anonymous. Over time, this has led to CCP employees changing the ways that they are willing or able to play the game.

According to Community Developer CCP Convict during a presentation at EVE London, CCP employees will often focus on smaller gameplay niches when playing EVE. They’ll play alone or with a small group of their coworkers to avoid interacting with the general public. Isolating themselves like this can cause them to miss portions of the game, and can lead to the impression that they are out of touch with large swathes of their player base.

According to an announcement during EVE London, starting in December, CCP employees will have the option to shed their anonymity if they wish. CCP employees will be able to freely announce themselves as developers to their corporations and in-game acquaintances, talk on voice communication software, and generally make closer and more meaningful relationships with players without fear of their identities being discovered. This will also open up areas of gameplay that were previously inaccessible to them due to the difficulty in maintaining their cover. 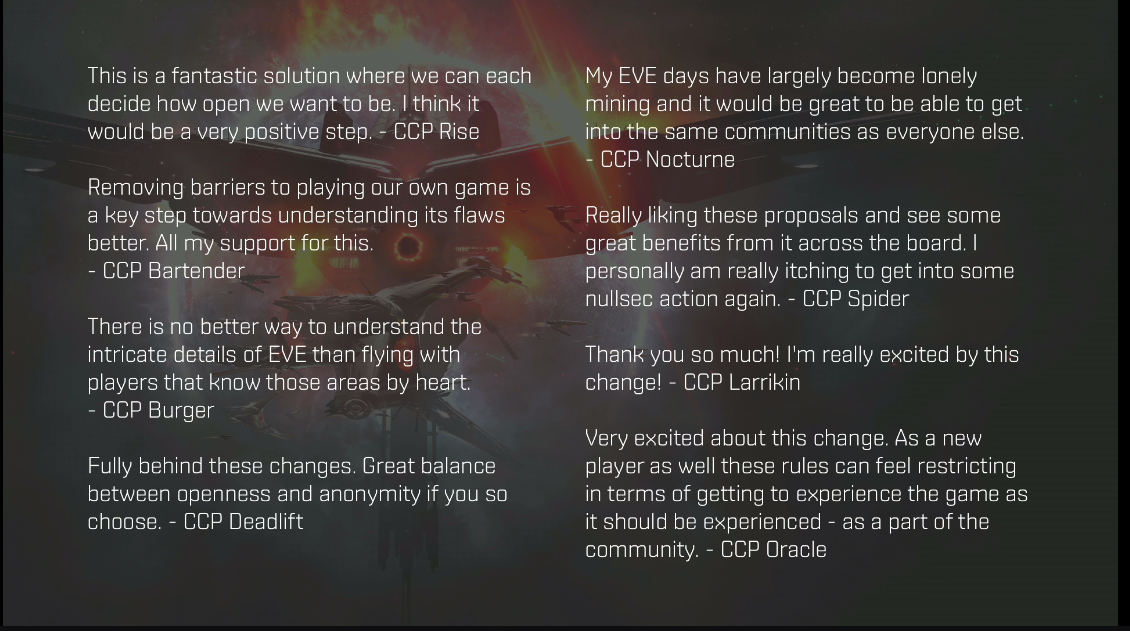 Developer responses to the internal proposal for this change. (Image: CCP Games/Twitch)

A few things will still be restricted under the new policy. CCP employees will not be allowed to fill any kind of leadership role in player organisations, in an effort to prevent something like the T20 scandal from rearing its head again. They will be banned from conducting any kind of large scale in-game market operations, due to their knowledge of future game changes giving them a massive advantage in this area. Finally, any kind of behaviour that could be construed as “griefing” will be strictly off-limits, such as killing new players in the starter zones, scamming players in any way, or any kind of cheating. Other than these rules, CCP employees will be treated just like any other EVE Online player, and will have the full sandbox at their disposal for the first time in well over 10 years.

CCP Convict ended the policy update announcement with a personal plea to EVE players: “Let us suck. Let us play.” He went on to explain that it’s important that the developers who opt to give up their anonymity have an actual experience playing the game and are treated like any other player.

The policy will go into effect some time in December, according to the announcement, and at that point, it will be left to the individual developers to decide whether or not they want to participate. It will likely be a while before the ramifications of this change are fully seen in EVE, but players and a handful of developers who have spoken about the changes seem to think that the long term benefits could be massive. I am personally looking forward to seeing if any of the players in my own corporation turn out to be CCP employees in disguise.