Visual Novel Sets Out to Buck Trends By Being Less Sexual, Gets Blocked By Steam Anyway

From the start, the lead developer of Crime Opera: The Butterfly Effect, Sean Bester, wanted his game to be different from the other games in Steam’s sea of often sexually-tinged romance and horror visual novels. This meant it would have very little sex and nudity, with the focus instead on a “mature” mafia tale. That, however, has not stopped Steam from rejecting the game due to what Valve perceives as “sexual conduct involving a minor.”

Crime Opera: The Butterfly Effect is an original English language visual novel (or OELVN, as the visual novel community calls them) about six children who – through various routes – find their way into their mafioso parents’ warped world. They wind up witnessing “murders, kidnappings, and a slew of other crimes,” some perpetrated by their own families. It is grim and traumatic stuff, in other words. The point, Bester told Kotaku in an email, was to set up a larger series in which the same characters age a decade in each entry, and what they experienced as kids comes back to haunt them.

Citing visual novel inspirations like Higurashi and Umineko, Bester said that his goal with Crime Opera is to give visual novel fans something a little different from the standard OELVN – something that doesn’t incessantly dangle the promise of T&A in players’ faces.

“The visual novel market is absolutely crammed with romance and horror based games, and a lot of them rely on the 18+ content to really sell,” he said. “It’s sad that developers have to resort to these tactics just to gain any kind of recognition in the market. Customers have to look really hard to find the few creators who stray from the formula, and that can be frustrating.”

He also said that OELVNs, in particular, often come across as quick and dirty knockoffs of Japanese visual novels. He wants to help show that they can be their own thing, too: “I want OELVNs to reach their true potential, so we can stop being known simply as lower quality copycats. I know the market is out there because I’ve always been one of those hungry customers. It all has to start somewhere though, and we can’t expect our customers to take chances with on our games if we aren’t willing to take chances ourselves.”

The more grimdark elements of Bester’s tale, seemingly, are not what Valve is opposed to. Rather, it’s the fact that Crime Opera contains two brief sex scenes between fully clothed adult characters, but they’re both witnessed by children. In one, an eight-year-old character climbs a tree and sees his father, a crime boss, having sex with his mistress, at which point his wife walks in and they argue. In another, a 10-year-old walks in on the father and his mistress, thinks the father is trying to injure the mistress, and attacks him to try and help her. In both of these scenes, the father and mistress are in a compromising position, but they are fully clothed. The mistress, it should be noted, is 18 – of legal age, but young nonetheless. Bester explained that, in the context of the game’s story, the point of having a young woman in a relationship with a 50-year-old crime boss is to demonstrate an “unbalanced power dynamic between these two participants, given that the man is a powerful mafia crime boss, and she seems to rely on him financially just to get by.”

Bester received the rejection notice earlier this week. In it, the Steam team said that when it comes to games that could feature sexual conduct involving minors, they don’t take any chances.

“I don’t think anyone who actually reads these scenes in context would be able to come up with a convincing argument that our intent was child exploitation. I’d much rather they point to the violence, if they really wanted a convincing reason to ban us.”

“While every product submitted is unique, if your product features this representation – even in a subtle way that could be defined as a ‘grey area’ – it will be rejected by Steam,” reads the rejection notice. “We are not interested in working with partners that dance around the edges of what’s legal. For instance, setting your game in a high school but declaring your characters are of legal age would fall into that category and be banned.”

Bester takes issue with this, as he does not believe his game depicts minors in sexually compromised states. The question is whether or not his game counts as a grey area. From the outside looking in, it could definitely fall on the wrong side of that line, given its focus on children. Bester doesn’t think that’s a fair assessment, though. He’s been working on Crime Opera’s story for five years, and he feels like these scenes are a key element of the game.

“At its core, Crime Opera is about a close-knit family (for better or worse), and the many intertwining relationships are often very complicated,” he said. “The loveless marriage of Xander and his wife is understood to be fairly ‘normal’ to these kids, because they’re used to seeing their bitter interactions... The idea that these small glimpses of a man standing behind a woman are what earned us a ban is not only insulting, it speaks volumes about the current state of censorship and our misguided values. In fact, I don’t think anyone who actually reads these scenes in context would be able to come up with a convincing argument that our intent was child exploitation. I’d much rather they point to the violence, if they really wanted a convincing reason to ban us (though we consciously kept the violent imagery to a minimum as well).” 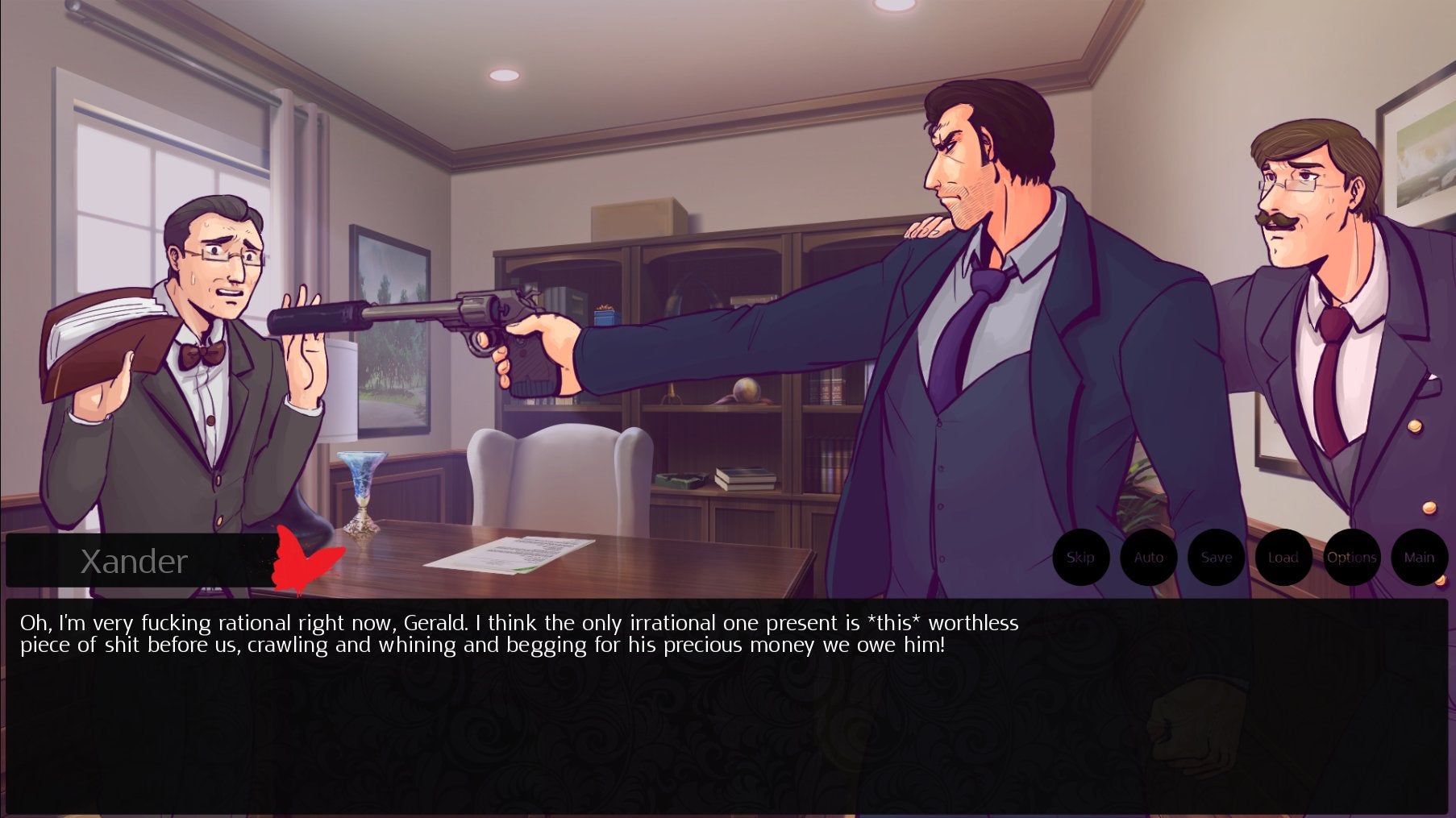 Kotaku reached out to Valve about Crime Opera’s rejection, but had yet to receive a response as of this publishing.

Valve has a history of inconsistently policing sexual content on Steam, though it started hosting uncensored sex games toward the end of last year – albeit only in certain regions. The company has taken to cracking down on games with young-looking characters, especially. But, as ever, it hasn’t always given developers the clearest idea of where they’ve erred, nor has it enforced the exact same rules across the board. As a result, developers like Bester feel that Valve has failed to implement a clear or transparent rubric around which games get to stay and which ones get booted off Steam’s shelves and into obscurity.

“It’s only the smaller developers that are suffering from Steam’s ambiguous set of rules for governing who gets to sell on their site,” he said. “I know the visual novel market is still fairly small, and I never aimed to be an overnight success... With the ban from Steam, it looks like it’s going to be an even harder uphill battle than we ever thought possible. It’s also extremely hard to prove your case when the game hasn’t yet been released, and no one is even able to fairly examine the aforementioned scenes in context.”

Other visual novel developers have rallied around Bester, sharing stories of their own games’ ill-fated attempts to navigate the fog-enshrouded swamp surrounding Steam.

Bester has appealed Valve’s decision, but he says that the Steam team replied with the same message as before. He’s not sure what to do next.

“At this point, while we want to believe that the situation will somehow sort itself out and we’ll be allowed back on their site, it really isn’t looking good,” he said, noting that he plans to sell the game on Itch.io, but with the knowledge that it’ll drastically reduce the game’s sales potential. “Right now I’m just trying to get the word out as best I can, in hopes that Valve may reconsider our pleas if enough voices are heard. It took me a long time to self-fund this project, and my team made many sacrifices to make this project come to fruition.”