Starting Destiny 2 Late Spared Me a Lot of Misery

Many video games these days improve with age and a big batch of patches, which is why it often helps to play them late. Ignore the hype, laugh off the social pressure, and play this year’s games next year. Can you do it? I keep doing it with Destiny games, and it’s been great.

Destiny 2 came out in September 2017, but I didn’t play much of it until September 2018, and even then sat most of it out until August of this year. From what I read of the coverage in late 2017, it felt satisfying to shoot aliens and acquire better guns and armour, but the main storyline had a bad villain. After beating him, there apparently wasn’t much to do.

The game I played, the one I finally committed to just a couple months ago, is fun and substantial. It is a sci-fi shooter in which it is satisfying to shoot aliens and acquire better guns and armour, and even though the main story has a bad villain, there’s now also a really cool section set on Mars that’s full of secrets and fun, escalating battles, and there’s a big extra campaign full of exciting missions on a wild west planet called the Tangled Shore. Destiny 2’s development team at Bungie recently added the moon area from the first game, complete with all kinds of changes and a still-unfolding storyline involving an ominous underground black pyramid. So much has changed that I can ignore all the new six-player raids and changes to PvP and still discover entire new modes such as Gambit that are perfect for me.

I’m happy. How are other players doing? Well, prior to getting into Destiny 2, the most similar game I played was the shoot-and-loot Division 2. I was there for the strong start of that one and have frequently been disappointed with its first eight months of mostly meagre updates. I go to that game’s subreddit and find myself agreeing with a lot of the dissatisfaction in its community. I’ve played enough Destiny 2 now that I started to hop into that game’s subreddit and, wow, those folks are so negative! Don’t they know how cool the game is that they’re playing? They’re dissatisfied with recent updates? Why don’t they like…

It just might not be possible to be consistently excited with a constantly updated game. The game developers can’t possibly keep up with players’ insatiable hunger for new content, and few people seem to have the patience to happily experience the undulations of new bugs and new problems with eventual fixes and revamps. 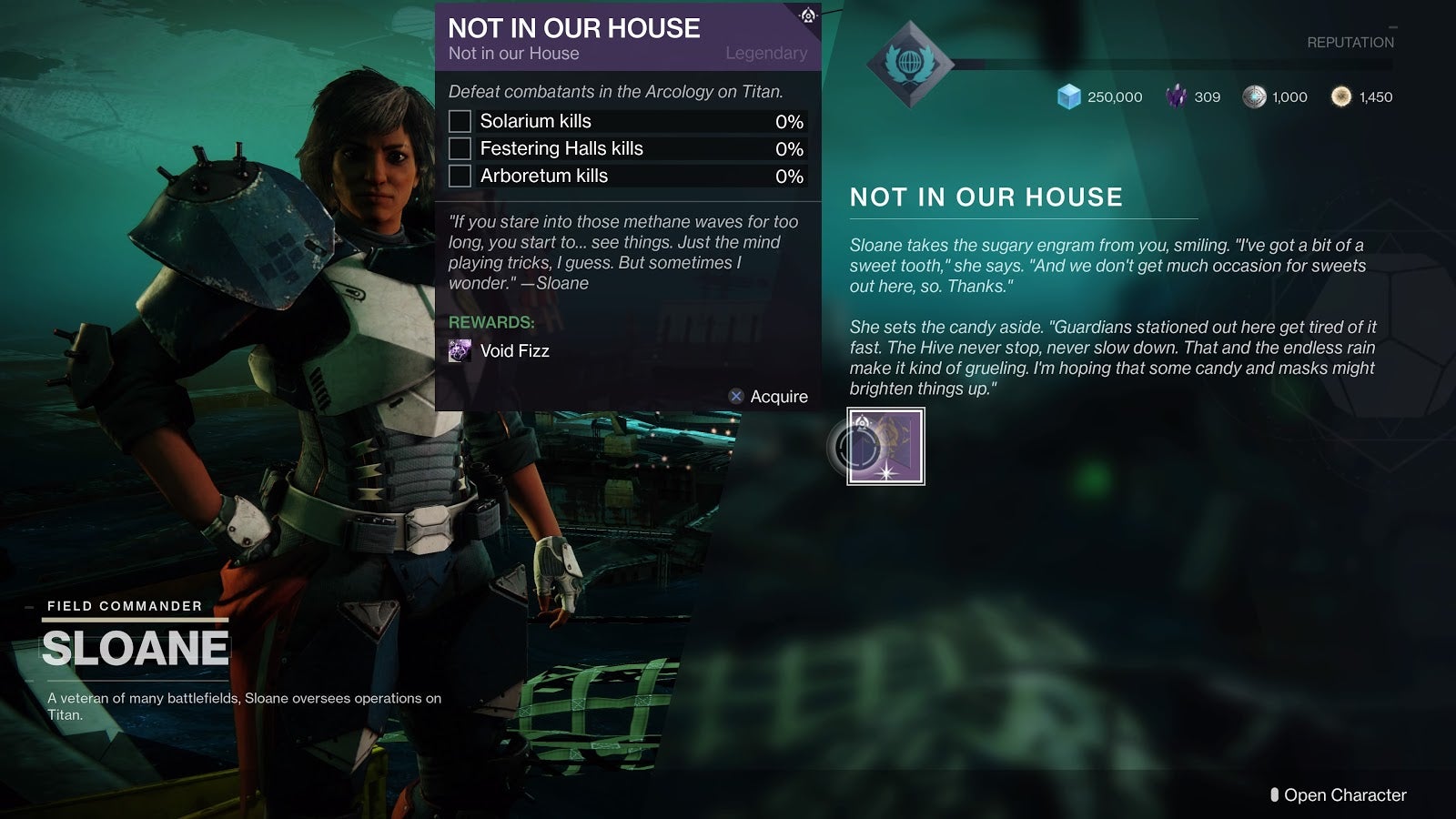 Destiny 2's new candy quest would have been a lot more tedious if I wasn’t able to multi-task it with other unfinished quests. Turns out, for example, that I had other things to do on Titan as well – and got them all done together.

If, however, you wait it out, miss most of the drama, and let the additions to the game pile up, then you get the Destiny 2 experience I’m having where even some of the more tedious tasks are more fun when you’ve got an in-game backlog of things to do. For example, the game’s been running its annual Halloween event, the Festival of the Lost. It includes an extended quest about trading sweets with each of the mission-givers on the game’s many planets, being tasked with a small grind of a mission each time (kill x number of these kinds of enemies, use y kind of weapon, etc). You get a box of raisins to take to one planet, where the person who gets it gives you chocolate or something. This mission would be no fun if I didn’t have much else to do in the game, but I did, so when I took it on and each leg of it brought me to another of the game’s planets, I used those visits as motivation to check which quests and sidequests I had to do in each place. I’d then pick some missions to go on, pin the newest grind from the candy quest to my heads-up display and would clear it out while doing some planetary missions that day-one Destiny 2 players probably finished in 2017 or 2018. Playing the candy quest this way helped me discover interesting tributaries of missions on planets I’d not fully understood. It also led to a nice narrative moments at the end of the quest.

As I play Destiny 2, my quest log is full of missions from each of the game’s first three years, the old mixing with the new. I’m simultaneously advancing through multiple expansions and watching as different parts of the game’s story blossom. As Bungie adds more side missions every other week or so, I clear some, slack on others, and overall enjoy the chance to play what I like, ignore what I don’t like, and not simply feel I need to feed on the next thing because I was starving for more.

The only catch to all of this is that some events in the game are playing out of order for me. A character who is dead in one set of missions I’ve been working through still spoke to me when I took on a side mission in another. Thanks to the game’s shift toward being free-to-play, areas of Destiny 2 that used to be locked off until key narrative moments occurred have been unlocked for everyone to access. I’m often nervous that I might step into more areas where I’m narratively not yet supposed to be.

That catch isn’t enough to make me regret waiting. For the first Destiny, I waited out the game’s raucous first year and felt I had the better experience for it. For Destiny 2, I mostly waited out the game’s first two years. It’s been great. And I guess I now know how many years I’ll need to wait out Destiny 3.

By Chris Neill on at

The Essential Dungeons & Dragons Adventures You Need To Play