Like Real Fitness, Ring Fit Adventure is Great But Tough to Stick With

For a wonderful stretch of days in late October, every short workout I did with Nintendo’s Ring Fit Adventure revealed it to be a better game. Then I just stopped playing. These are the best and worst things that can come from a video game combined with exercise.

I reviewed Ring Fit Adventure on October 17 after having played it for 11 days. I was impressed and called it “an amusing generator of unusual, unprecedented experiences.”

I intended to keep playing, one 15-minute workout at a time, and managed to for another 10 days. Each workout is part of the game’s overall world-saving quest. A workout is one level of the game and involves controlling a character through a running course and a series of enemy battles. Those fights are waged with exercise. You use the Switch’s sensor-filled controllers and a custom handheld exercise ring to track your movements and deliver damage to your foes. Each leg lift or overhead press brings those enemies closer to death.

Normally I’d binge a new game I liked for hours at a time. I couldn’t do that with this one without passing out. I nevertheless wanted to see more. And I found some wild stuff.

Just before I wrote my review, I reached a point in the workout-driven story that introduced the idea that exercises are colour-coded to different muscle groups and do extra damage to enemies of the same colour. Soon after my review, I started to discover some fun new enemy types. My favourites have been Matta Rays, yoga mats that heal wounded enemies.

Shortly after that, I discovered how to row a boat, an action that your character learns over the course of several levels set in the Nation of Sporta. The narrative set-up was amusing, but the exercise that triggers rowing is weird: 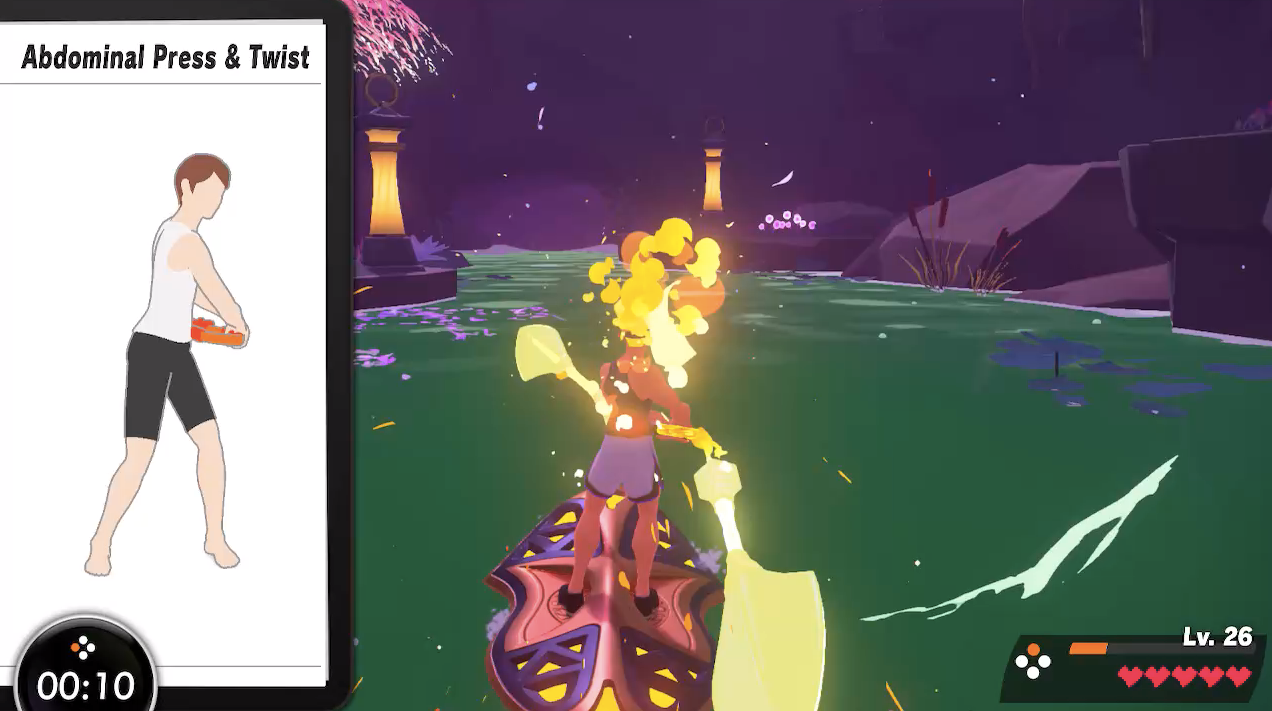 Surprisingly, the actual rowing can feel epic as you row past massive statues and off waterfalls.

The game’s story seems to mostly be some fluff about your character teaming up with a talking workout ring to save the world, but it has some unexpectedly sharp moments, like when your character’s exercise ring companion vows to pursue the workout-wild enemy dragon named Dragaux. That sounds like stalking, Dragaux remarks. 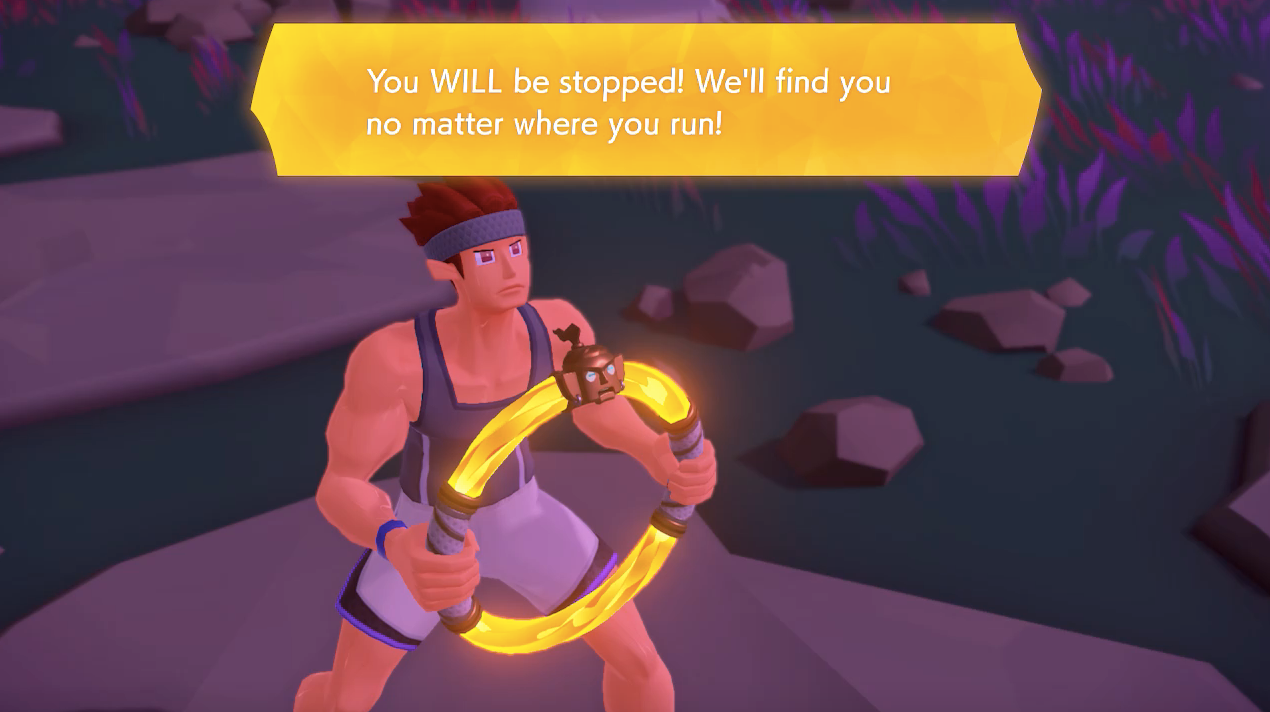 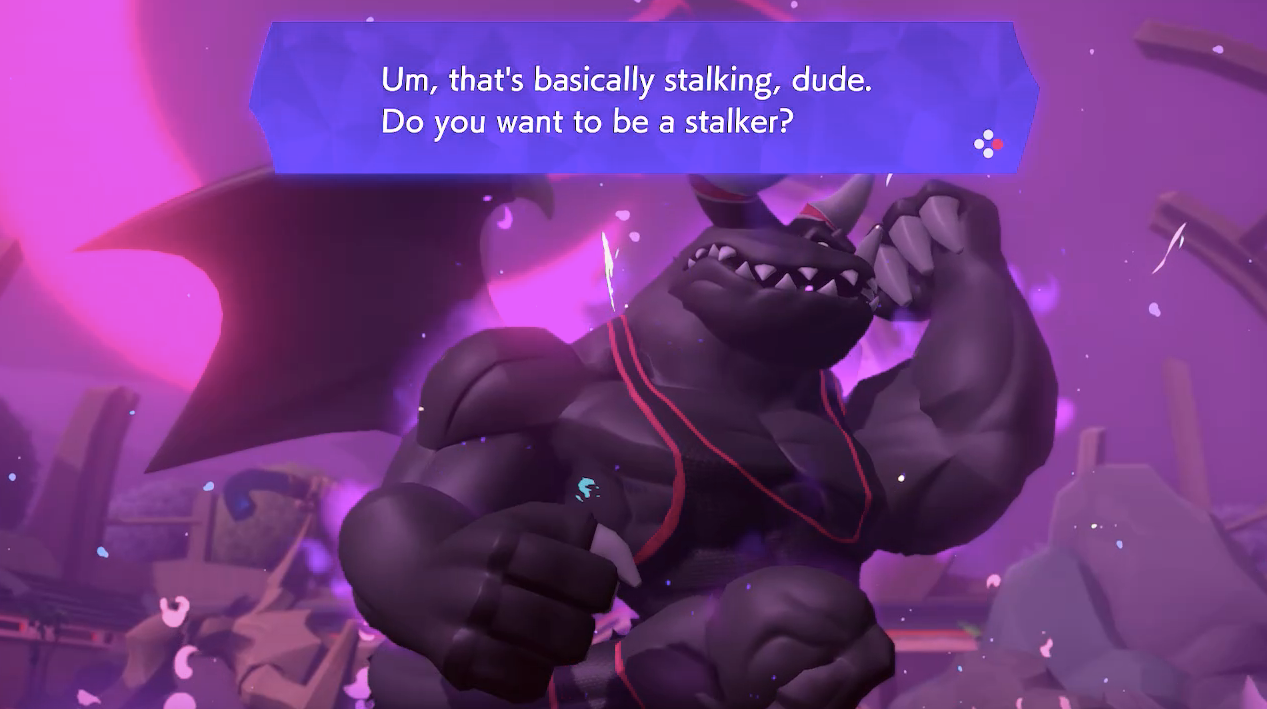 As the game’s next chapter begins, your ring buddy is still sweating that remark. “You know I’m not a stalker… right?” he asks your character. 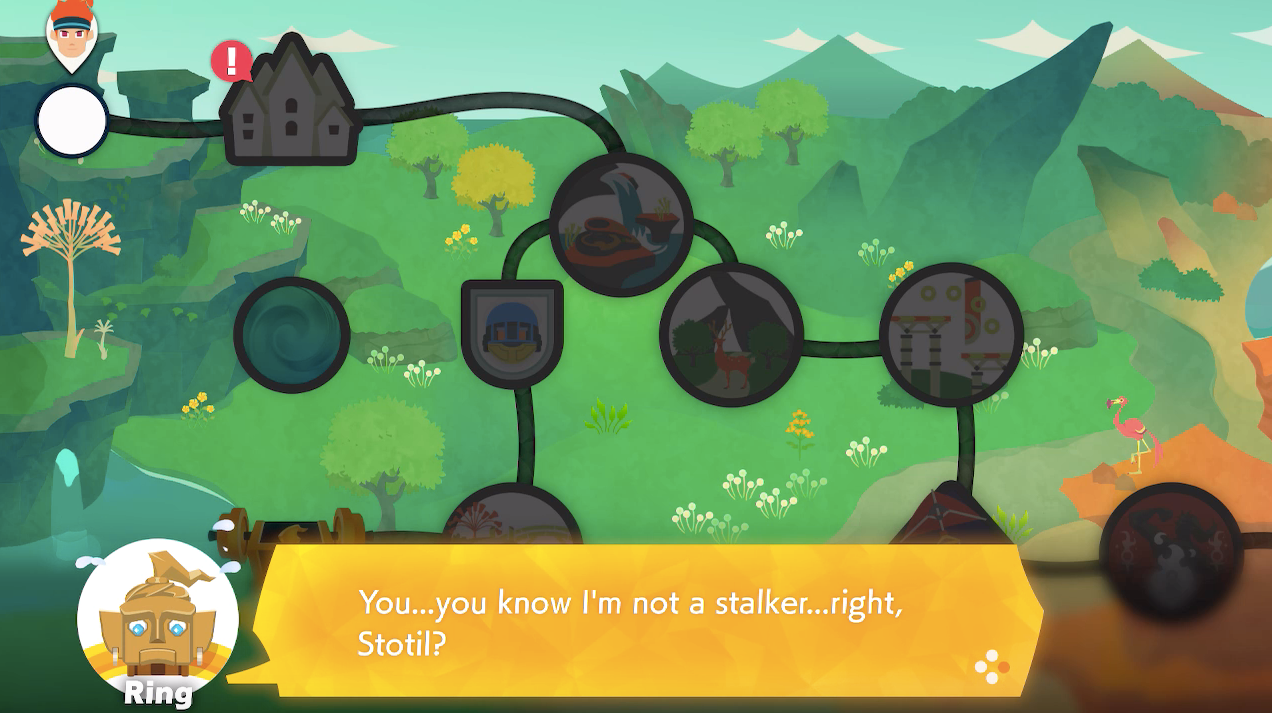 Along the way, the game has continued filling out the tropes of turn-based combat. Right away, I learned that some attacks target one enemy and others target a group. Then I learned the colour-coding thing, which established a hierarchy of weaknesses. Days after my review, during one workout, I unlocked my first recovery skill, an exercise that doesn’t damage enemies and instead heals my character. 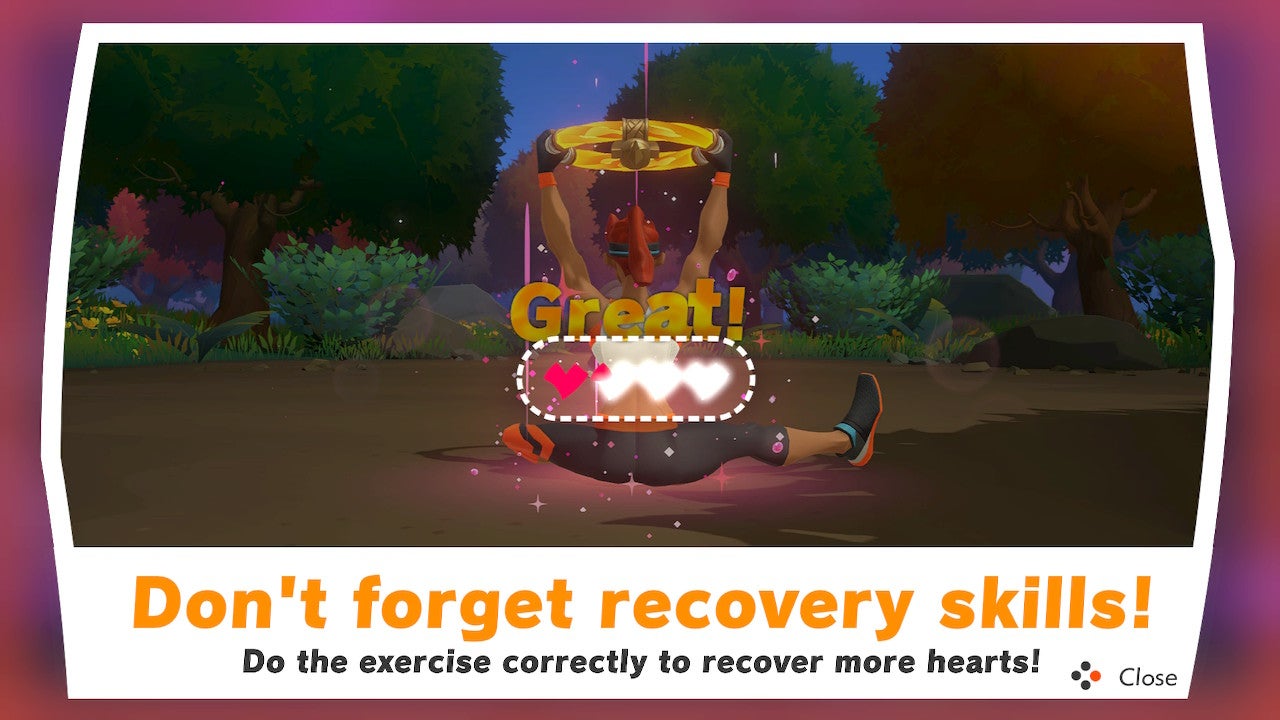 I’ve also slowly been unlocking various recipes for smoothies, that function as stat-boosting spells. A classically clever Nintendo touch: you squeeze the game’s exercise ring to squeeze the fruit needed to make smoothies.

On October 25 I reached an apparent milestone in the game, as a character told me about four special exercise masters who sound like they’ll be characters against whom I’ll face off. Their names seem to hint at their exercise expertise: Allegra, Armando, Abdonis, and Guru Andma. 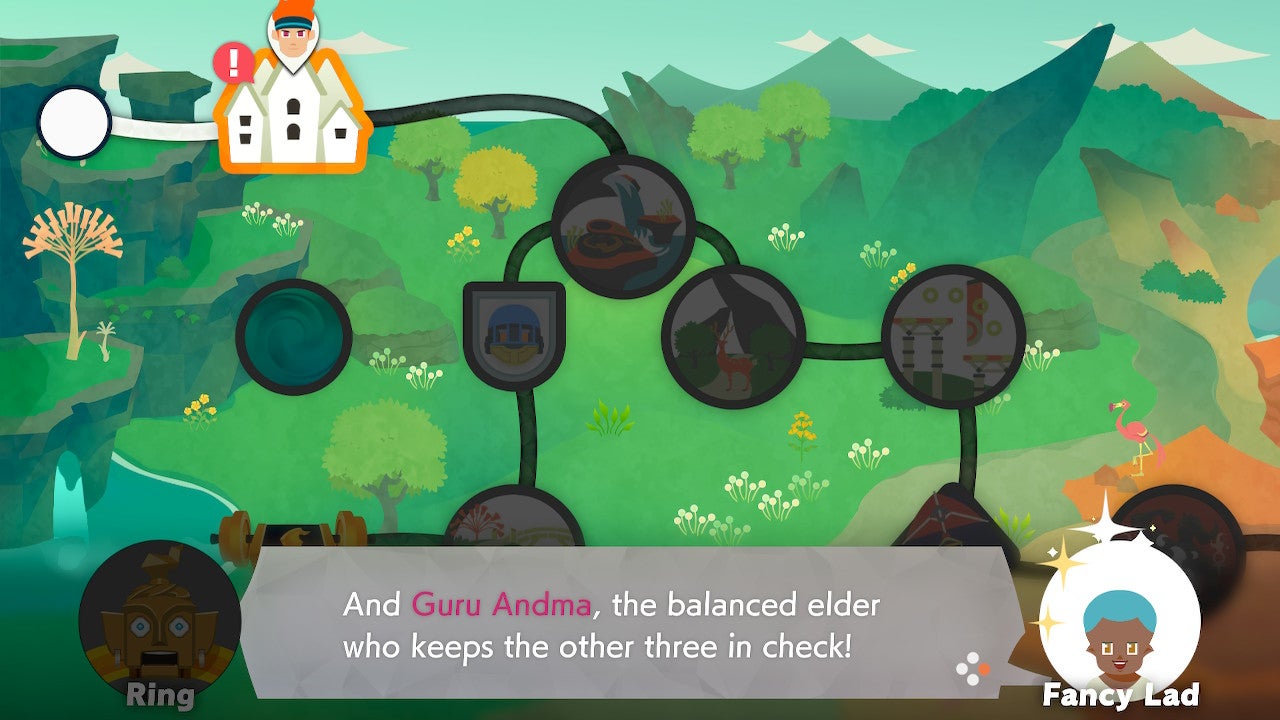 I haven’t reached any of those characters, because on October 27 I did what has turned out to be my last Ring Fit Adventure workout. I’d been playing nearly every day, but I lost my momentum like I’d made a New Year’s resolution and had just reached January 10. These things fade. I wound up skipping two days and I was done for. Skip one day and it becomes easier to skip more.

Life got in the way. My final workout had been on a Sunday. I failed to squeeze a workout in on the following Monday morning, and then things got stressful at work by that Tuesday. My workout-in-the-office-in-the-morning routine fell apart, and, as subsequent days at work remained stressful, it was all I could do to to keep up with my preferred workout: early morning runs (up at 5:30 am if I could!).

It’s funny. When I reviewed Ring Fit, I had been focused on how the gaming part of the thing made the exercise end of it more compelling. I might get so into the strategy of a battle, I realised, that I’d become less mindful of the tedium of exercise. The game would make exercise more fun. I had not deeply considered the other way around: how the exercise aspect of things would affect a game. I’d not considered how the physical limitations of a game played by exercising my body would force a slower progression through a video game world than I’m used to. I’d not reckoned with how a gaming adventure driven by exercise would be prone to the accidental abandonment that can befall any workout routine.

In my review, I praised the game for making me finally want to do abdominal exercises. Now, I’m left feeling the way I do about crunches: it sure would be nice to be in a routine and doing them again, if only I could find a will and a way. After all, I’d like to see what this Abdonis character is all about.