Call of Duty: Modern Warfare launched on October 25, bringing changes to the multiplayer that the community once only dreamed about, like free maps for all. But the design of those maps isn’t playing out very well.

For the first time ever, this year’s Call of Duty features cross-play functionality to bring players together across PlayStation 4, Xbox One, and PC. Modern Warfare is also ditching the DLC season pass in favour of free maps for everyone, continuing this year’s theme to keep everyone playing together. Unsavoury loot boxes have even been scrapped for a Fortnite-style battle pass reward system, which is scheduled as post-launch content, returning the Call of Duty community to a time before guns and camos were all a big gamble.

Unfortunately, I have to keep reminding myself of the positive aspects as I slog through multiplayer matches. The design of Modern Warfare’s maps is a little too ambitious. My estimation might be slightly exaggerated, but there are roughly one million doors, windows, sneaky corners, and flanking routes packed into these new maps.

This Call of Duty allows you to open and close doors, which can be a great feature when you want to just crack a door open for a quick peek or to toss a stun grenade, but some of the maps present far too many options.

In previous Call of Duty games, I could easily pick a path to flank opponents with a quick rush, but Modern Warfare forces me to downshift my playstyle. I’m still learning which doors are just décor and which might cause my flanking route to backfire.

The community is often split when it comes to opinions on map design. Some players, myself included, love the classic three-lane-style maps present in many of Treyarch’s Black Ops games and Sledgehammer’s Call of Duty: WWII, but others feel they’re predictable and boring.

Modern Warfare almost completely veers away from Call of Duty’s recent design trends, with the map “Gun Runner” being one of the few that still have a traditional feel. Most maps have a chaotic layout of buildings with an overly generous number of doors and windows. It’s very easy to play cautiously but still get shot in the back. 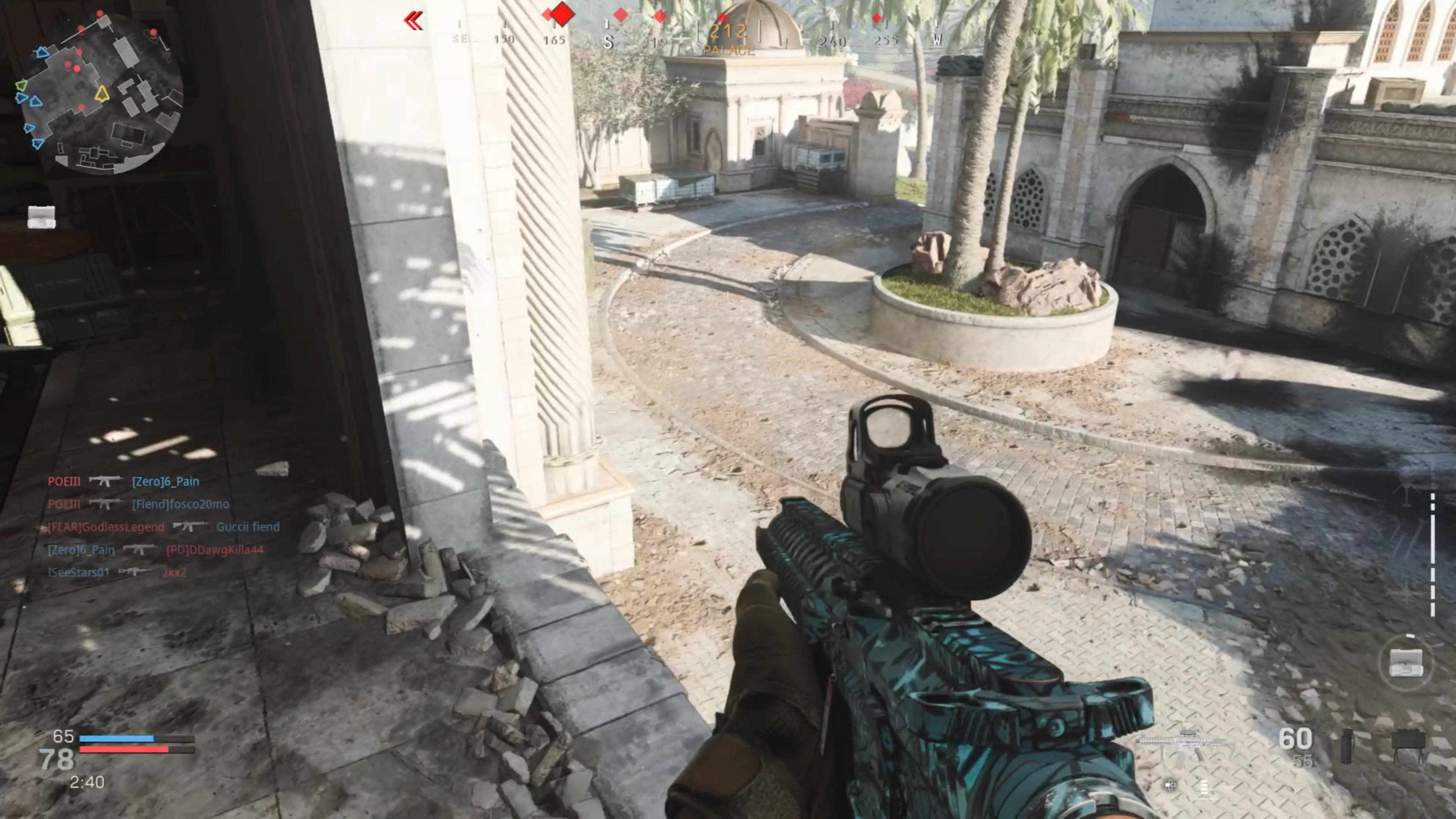 There’s also the issue of map size. Modern Warfare’s beta definitely showcased the stronger designs within the pool of launch maps, especially making everything feel tailored to fit each individual mode. The 2-v-2 Gunfight mode has small maps perfect for keeping the action close, and 32-v-32 Ground War maps accommodate the large-scale warfare. But not all of the standard multiplayer maps have a fitting size.

“Aniyah Palace” is a giant map that feels ill-suited for the 10-v-10 matches, especially if you’re playing Headquarters. The map was most likely designed for the larger 20-v-20 modes, but its sheer size doesn’t work well for smaller matches. Headquarters is a King of the Hill-style respawn mode that requires teams capture a rotation of “headquarters” locations for points, but if you die before a Headquarters location is revealed, you’ll never make it out of the spawn in time to help your team capture. There’s one ATV near the spawn for teammates to fight over, leaving the rest of the pack to face a gruelling sprint towards the objective points.

The palace could be a less frustrating map simply if some of the outer portions could be trimmed away. My best advice for you if you’re playing on Aniyah Palace is to make use of the tactical insertion field upgrade to spawn closer to the action.

Also, map size can easily be adjusted for smaller 6-v-6 and 10-v-10 modes by scaling down the playable area of the larger maps, which is something Battlefield has done in the past when hosting a smaller Team Deathmatch on maps initially designed for warfare on a massive scale.

Modern Warfare’s maps aren’t horrible, but they’re not all ideal for Call of Duty, and have frustrating learning curves. Map design plays a huge role in replayability of a game like Call of Duty, where players can quickly get bored or frustrated if the maps aren’t fun to play. I hope Infinity Ward takes community feedback in consideration for the upcoming DLC maps. Even if the designs are chaotic clusters of buildings, maybe they’ll still scale back on the number of windows, doors, and campy nooks.