The equation underlying Sophia “Djarii” White’s Twitch stream is really pretty simple. She loves video games, art, and makeup, so she combines those things to express herself, resulting in intricate paintings where her body is the canvas. White’s talent is immediately clear, and yet, she has courted no small amount of controversy for simply doing her thing. Some viewers insist her art is nothing more than a Trojan horse for illicit nudity on Twitch.

White, who studied art in two different universities in England and Scotland before becoming a Twitch streamer, did not see any of this coming when she first got started. She was content to largely stream video games until Twitch opened the floodgates for “IRL” channels back in 2016, at which point she decided to try face-painting, themed around characters from games like World of Warcraft. It was a natural progression – makeup, she told Kotaku at TwitchCon earlier this month, has always been a core part of her identity.

“That just made me feel like the best version of myself. Ever since then, I’ve been trying crazy makeup.”

“I was a very awkward-looking kid,” White said. “I found myself with a bunch of friends who listened to heavy metal and wore big, black makeup and really out-there clothing. That just made me feel like the best version of myself. Ever since then, I’ve been trying crazy makeup.”

After making it to the finals of a major makeup competition but ultimately failing to win, White decided she wanted to up her game, resulting in her more elaborate works on Twitch. These sometimes involve painting not just her face, but large portions of her body. White said the process is not entirely dissimilar from painting on canvas, except she’s looking in a mirror, so everything is reversed. This makes things like calligraphy a nightmare, she said, but mostly, it’s about training your eyes. Well, that and having the mental fortitude to power through painting sessions that sometimes last as long as 15 hours. 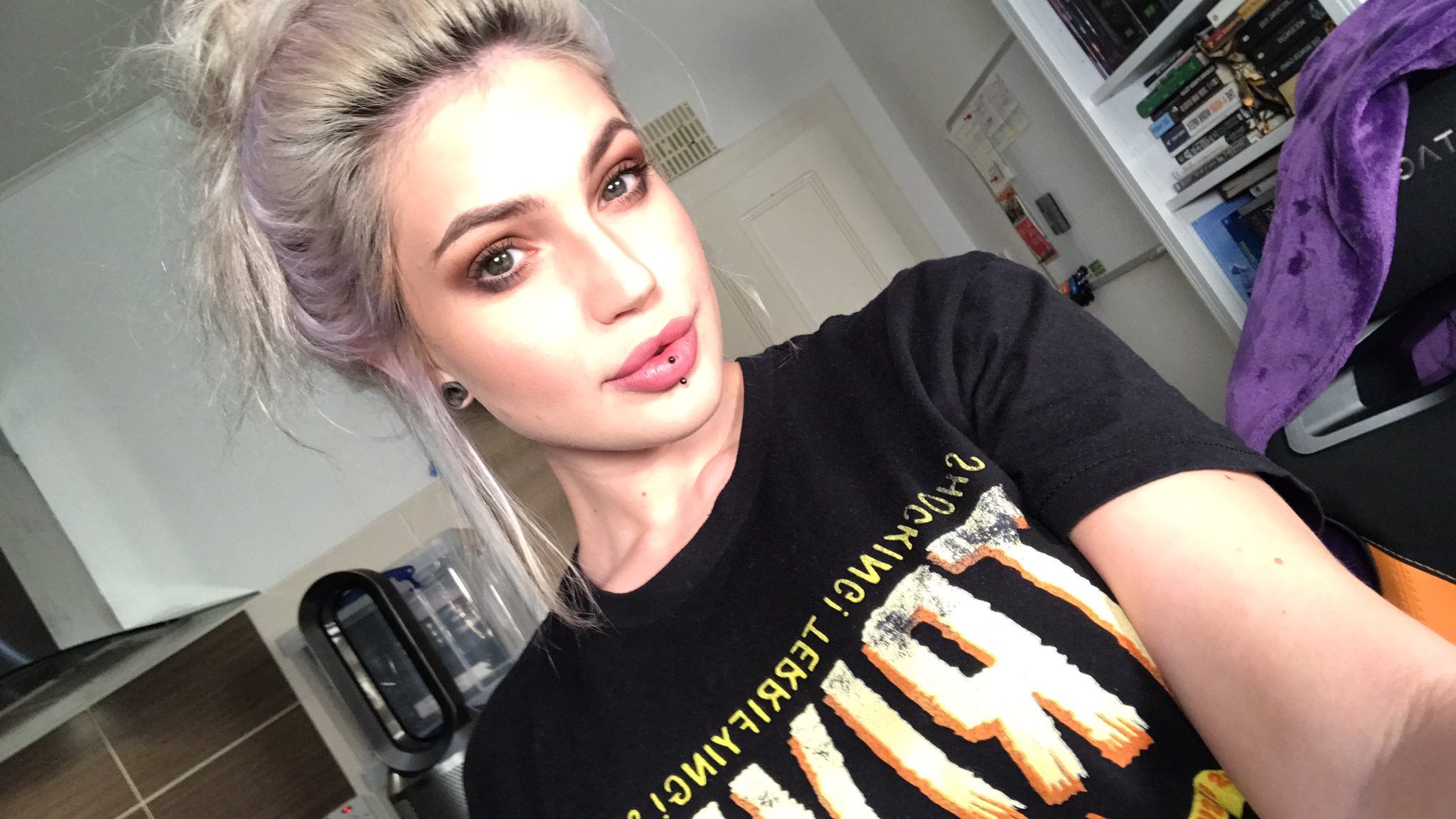 Even for White, whose bread and butter is putting paint on surfaces as naturally as regular people put butter on bread, this can take a toll. “It can be very exhausting mentally,” she said. “Makeup and any art is an intimate and personal thing that it’s sometimes hard to share with the world. There are so many judgements and critiques, and sometimes you can’t take Jimmy in chat over there telling you that your painting style just isn’t really up to his taste.”

These days, Twitch is about far more than just games. There is, however, still a perception among portions of the Twitch community that anyone who steps outside the realm of pure video game streaming is leeching off the hard-won success of gamers. This goes double for any woman found to be committing the Twitch crimes of a) existing and b) having a body. Over the years, multiple controversies have erupted around this, including debates over so-called “titty streamers” showing skin, battles over whether or not women are using sex appeal to steal viewers from men, suspensions for relatively modest cosplay, and outrage at breastfeeding on stream.

Body painting was an early target for these sorts of tirades because it represented one of the first instances in which Twitch explicitly allowed a degree of nudity, typically from women. It remains a popular target for angry users to call out as proof of their conspiracy theory that Twitch has become an infernal amplification engine for women’s deceptive wiles.

White, as one of Twitch’s most popular body painters, receives more of this abuse than most. Given that there is nothing intrinsically sexual about her work, she’s disheartened by this response, but not exactly surprised.

“They think it’s really sexual because they think a woman’s body is inherently sexual – which it is not,” she said. “Context is a very, very important thing. I would say that body painting leaves as much to your imagination as a tight T-shirt does. Most people who tune in don’t necessarily notice that it’s a paint for a while, because their brains don’t even recognise it.”

White’s goal is to set an example that viewers and haters alike can learn from, so that things will be better on Twitch not just for her, but for the whole community of streamers who specialise in makeup and body painting.

“I prefer just to educate people on what is and isn’t sexual and why context is very important in this matter,” she said. “And also that being sexual is not a bad thing at all. If you don’t like that part of Twitch, then just don’t watch those channels.”

“Not all body painting includes the entire body, nor is it only on a woman,” White said. “There are male body painters as well, and you don’t see the same comments flying toward those guys.” White will sometimes just do face painting, or paint down to her shoulders, or further down her torso. “All of them are the same as far as sexuality goes, which is non-existent in any way, shape, or form,” she said. “There are ways to get sexuality across that are much easier than spending 15 hours to paint yourself to look like something that isn’t really sexual at all.”

These days, her audience includes many converted sceptics. “Often, I hear ‘I wasn’t a fan of this whole body painting thing, but I’ve really opened my eyes to it,” she said.

“There are ways to get sexuality across that are much easier than spending 15 hours to paint yourself to look like something that isn’t really sexual at all.”

Beyond the art of body painting, a woman’s choice of makeup (or to not wear any) can often raise the hackles of Twitch’s primarily male audience. Just look at the overblown outraged and derisive response to top streamer Imane “Pokimane” Anys’ decision to go without makeup at the start of a stream last year. After many users mocked Anys’ makeup-less appearance and pointed to this as an example of women using makeup to deceive men, other women streamers also went without makeup in a show of solidarity.

In her time as a makeup-focused streamer, White has found that people often view makeup as some kind of trick. She wishes people could just be “kinder,” and said that she thinks Anys is “beautiful” with or without makeup. But also, she believes, that’s not really what last year’s big makeup blowup was really about. Some viewers freaked out because they realised that what Anys did in that moment wasn’t for them.

“It’s not a trick. It’s not for anyone else,” White said. “It’s not for any dude who I’m trying to impress, you know? People need to remember that we do things for ourselves – not for the men who think, ‘Ah, I’m being tricked.’” 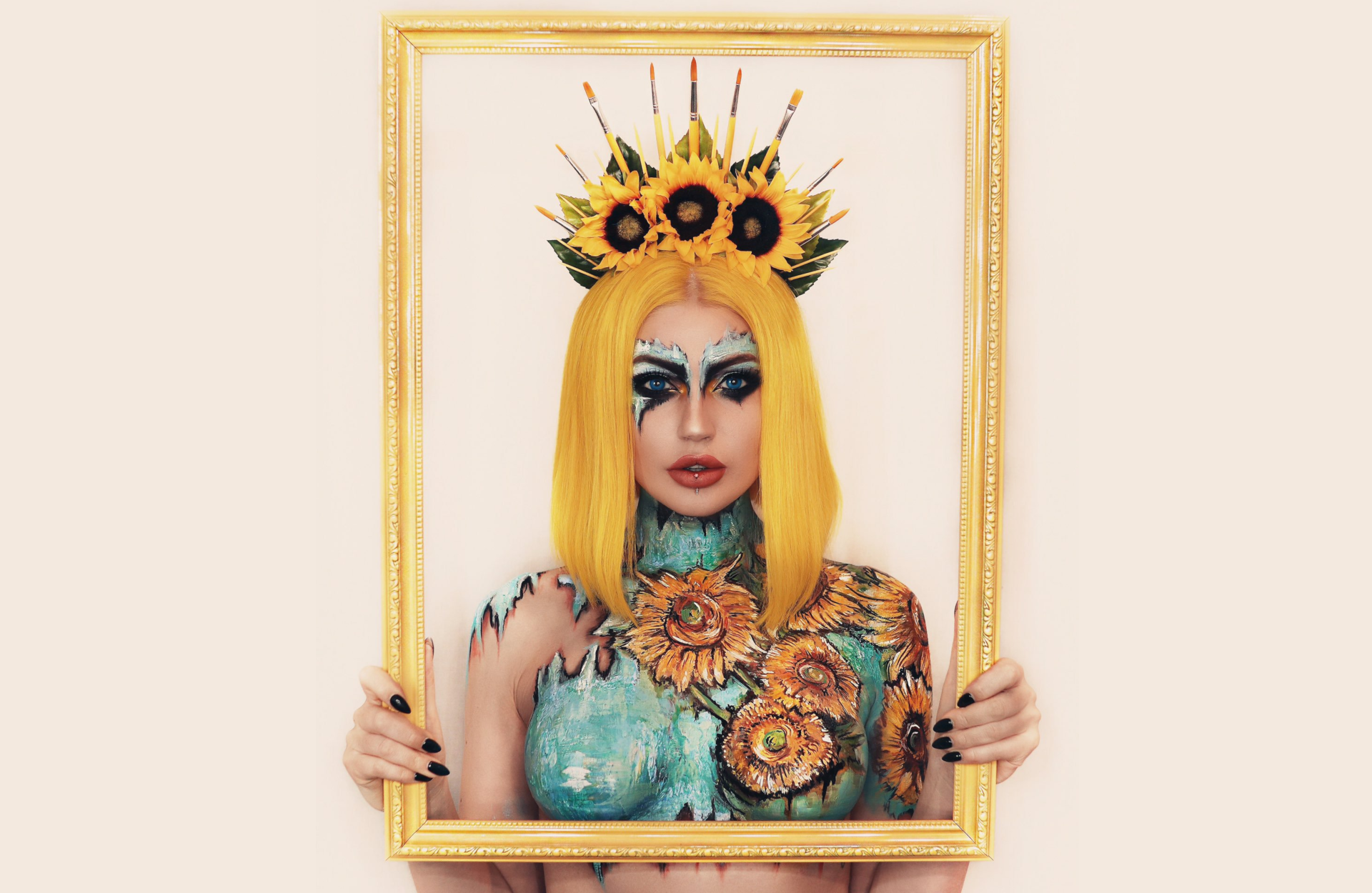 White loves what she does, and finds new angles from which to approach it. This year, she put together a look inspired by Vincent Van Gogh’s “Sunflowers” painting, which involved painting with latex so as to recreate the painting’s almost raised-off-the-canvas textured effect, something White had “never seen before” in body painting. It’s now one of the works of which she is most proud, she said.

But, she said, there’s still nothing quite like doing body paintings of video game characters that have “significance” to her. “I do a lot of World of Warcraft ones because that game has been a big, big part of my life for the past 11 years,” she said. “It’s hard to put into words. It’s just so badass. When you’ve painted yourself as Sylvanas Windrunner, The Banshee Queen, and you just look so amazing, it’s like, wow. It just feels great.”

“I just love that people will look at me and be like, ‘Wow, your makeup is really spectacular!’ That makes me feel so proud and so happy,” she said. “That’s just how I love the world to see me.”