Pokémon is Fine, But Digimon Story Cyber Sleuth is One of the Best Monster RPGs You Can Play

For many of us, Digimon is largely remembered as a series of cartoons that aired on Fox Kids. Digimon was darker and more mature than its contemporaries, which won it a lot of die-hard fans, but the games, at least the ones released in the West, never really lived up to that promise. All that changed in 2015 with the release of Digimon Story Cyber Sleuth, a game that rekindled my love of Digimon and is being reissued today alongside Digimon Story Cyber Sleuth: Hacker’s Memory for PC and Switch.

In the world of Digimon games, we got life sims, kart racers, and even fighting games, but the series’ greatest strength, its narrative, was nowhere to be found. If you wanted a nice, traditional monster-raising game with a story, you’d have to look elsewhere, but you’d never find anything as enjoyable as those early Digimon cartoons, at least not in English. Digimon Story Cyber Sleuth changed all that.

I didn’t expect this would be a game for me. I have always been a die-hard PC gamer, the kind of person who plays PC-centric genres like shooters, RPGs, and strategy games, but in early 2015, I heard there was a new, story-driven Digimon game coming out for the PS4 and Vita, and I knew I had to check it out. I wasn’t thrilled that the game was exclusive to Sony consoles. I’d never managed to stick with a JRPG other than Earthbound. And the character designs looked terrible, but hey, it was a new Digimon game. I’d take what I could get.

Here’s the premise: it’s a JRPG in which you’re exploring a virtual world called EDEN, which looks a lot like OZ from Mamoru Hosoda’s Summer Wars (fun fact: Hosoda directed the short film Digimon Adventure: Our War Game! which has a lot in common with Summer Wars). You’re supposed to be meeting up with some friends in cyberspace for the first time, when you get hacked by a mysterious assailant. This hack gives you the ability to capture digital monsters, more commonly known as digimon, a unique life form thought by many to be nothing more than computer programs. Unfortunately for you, a ghost shows up, everyone scatters, you meet a mysterious ghastly boy who looks just like the ghost but isn’t him, and eventually you get eaten by a monster that’s secretly been plaguing the internet for months.

Some part of you manages to log out of the internet, but you’re no longer you. Instead, you’re a new kind of digital life form, capable of manifesting in reality and as a computer program within EDEN. You’re rescued by a detective with a horrible taste in coffee and tasked with working for her detective agency. You start at the detective agency, pick up mysteries to solve, then jump between EDEN and Tokyo, putting the pieces together, befriending new digimon, and ultimately saving the world.

What follows is a story rich with all the twists and turns you’d expect in a great JRPG, localised in English but dubbed in Japanese. I’ve been playing a lot of Pokémon games lately, and while I enjoy the actual gameplay, their stories are overly simplistic. Beloved rivals like Blue and Silver have been replaced with milquetoasts who are mediocre at best and annoying at worst. There’s none of that here.

Cyber Sleuth’s cast is rich with characters, and its sidequests can be genuinely great at times, at least for a low-budget Vita JRPG. I really enjoyed helping out the paranormal school club, discovering a mysterious missing floor of Nakano Broadway, and rescuing a doctor in a cursed hospital, among other quests. This is a mystery game where the mysteries themselves are pretty linear, but they’re well written enough that I still had a great time with them. 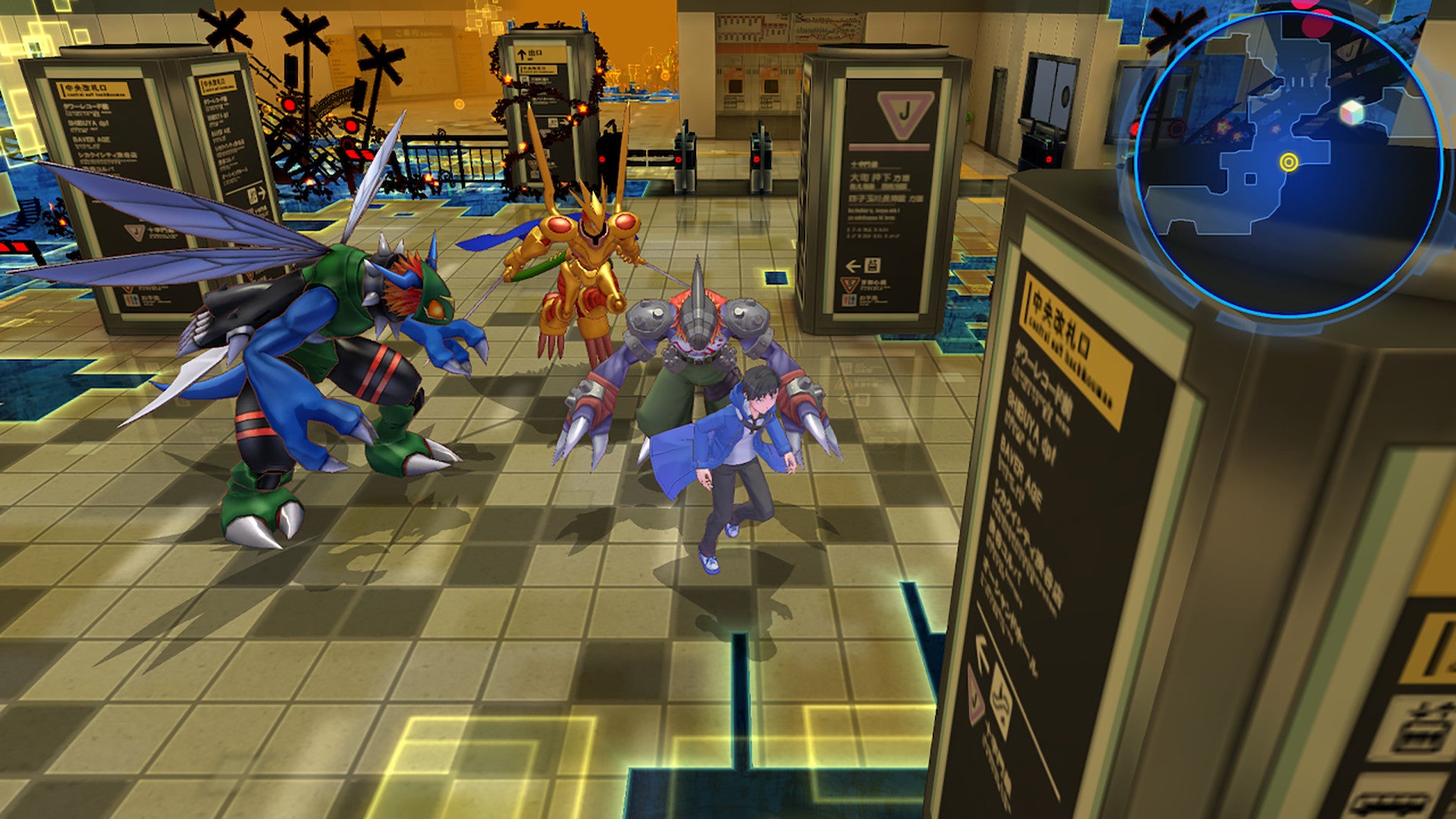 What an adventure it is! Unlike the cartoons, which take place largely within the digital world, a big chunk of Cyber Sleuth takes place in Tokyo. Ever visit Whiterun in Skyrim? It’s got maybe 15 buildings in it, and not many more people, but it’s supposed to be this gigantic, teeming metropolis, capable of protecting people from dragon attacks. Cyber Sleuth is different. It is realistically sized but only in small, bite-sized chunks that represent each area. The game uses its limited level size to its advantage, letting you visit a wide variety of locations within Tokyo and then rendering them as realistically as possible. These spaces feel believable because they feel real, even though the maps are so small.

Throughout your journey as a detective and monster trainer, you might find yourself visiting Shinjuku or Akihabara or walking through the Nakano Broadway to drop by Mandarake. The Cyber Sleuth games were built originally for the Playstation Vita, and their graphics aren’t going to compete with any modern big-budget exclusives. It’s not reasonable to expect that they’ll accurately depict several key locations in Tokyo, but they do a fantastic job of getting across the vibes of being in a big city. Cyber Sleuth conveys a sense of authenticity by jam-packing every square inch of every single map with as much detail as it can. Very few games capture the real spirit of a city, but Cyber Sleuth’s attempt is wonderful.

Of course, a great plot and a sense of place are all well and good, but they’re meaningless without great gameplay driving it all. Typical monster raising games, as well as the Digimon anime, operate like this: you start with a monster like Agumon, and after he gets enough experience, he evolves into Greymon, who evolves into Metalgreymon, then Wargreymon, and finally, Imperialdramon. In the anime, digimon could both digivolve and de-digivolve, transforming back into their smaller selves, because it would be pretty hard to carry on a 54-episode anime when Agumon grows to the size of a T-Rex by Episode 2.

Cyber Sleuth takes this idea and runs with it. For my starter, I picked Palmon. I levelled her up a ways, digivolved her into a Togemon, then de-digivolved her into a Renamon, before evolving her once again into Kyuubimon, then Taomon, and finally, Sakuyamon. As cool as my Sakuyamon was, though, her stats weren’t great because her ABI – her ability score – and maximum possible level were both low. Once you get a digimon to be the species you want, you still have ways of increasing its overall power. How do you achieve that? More digivolving and de-digivolving. Once you hit the maximum ABI (100 in Cyber Sleuth, 200 in Hacker’s Memory) and maximum level (99), your digimon is as strong as it’s going to be.

But let’s say you’re interested in the endgame. Cyber Sleuth released with some DLC that includes some of the toughest fights in the game, the kind of fights you need to build very specific parties to beat. I had all the digimon I wanted, but even at maximum power, they weren’t good enough to take on the Seven Great Demon Lords. I’d have to teach them new skills. 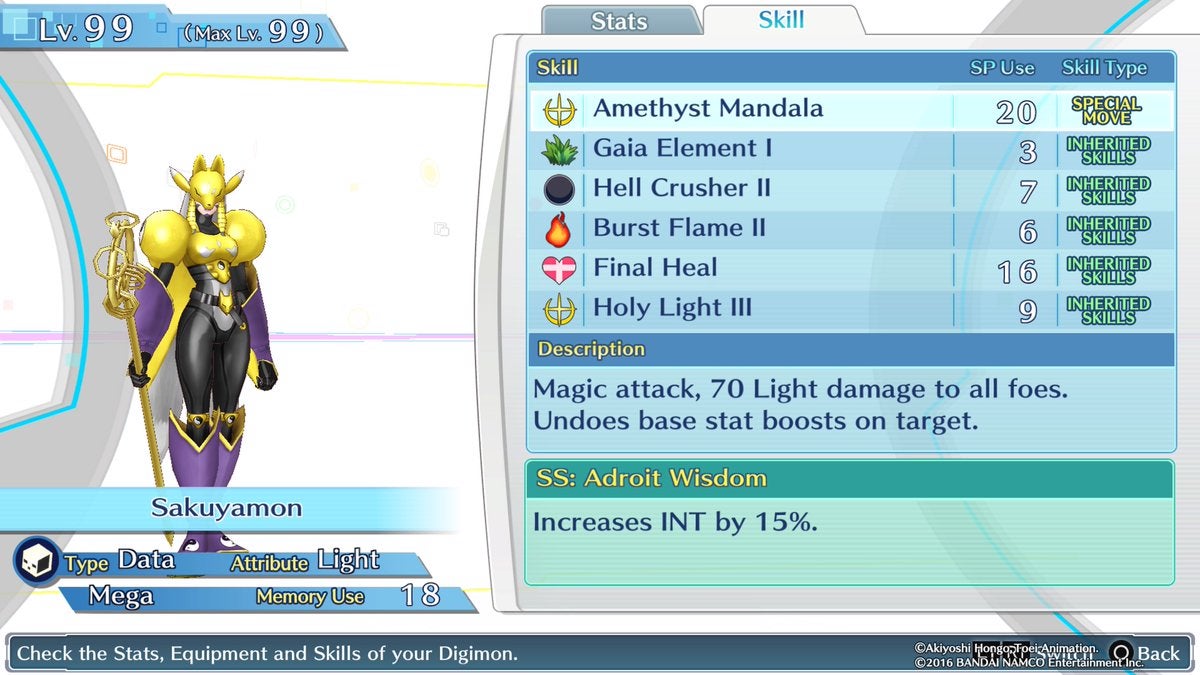 See how nearly all her skills are inherited? That’s because Digimon Cyber Sleuth is a game about planning. It’s a game about working out what you want and how best to get it. Figure out where certain digimon spawn to battle you, then scan them to capture them, digivolve and de-digivolve until you’ve built the perfect monster, and throw yourself at any challenge the game has to offer you.

For some people, this may sound tedious; but I find it way better than, say, grinding my ideal team up to take on the Elite 4 in Kanto. I’m just running around in a cave, hoping that eventually my Dragonair will hit level 55 and become a Dragonite. Because Cyber Sleuth lets digimon level really fast compared to Pokémon, the grind isn’t that bad, and there are ways to target items or specific digimon to increase your overall XP gain. It’s a game built around long-term planning and frequent digivolution and de-digivolution; there’s a relaxing zen to it. I’ve got entire digimon to their maximum level after a single battle before, and for casual players, that’s really all you need. Optimising stats isn’t required. It just feels really rewarding for players who want to.

In a sense, it’s like a grand strategy game. It’s not about the immediate, moment-to-moment play as much as the longer term plans you execute. It’s a great game to play in bursts, which makes sense because it was originally released for the Vita, getting a few digivolutions in here and there. I played the entirety of Hacker’s Memory – over a hundred hours – on my Vita, and I had a blast with it. Cyber Sleuth is perfect for the Switch.

Digimon Story Cyber Sleuth and its stand-alone expansion, Hacker’s Memory, are some of the most fun I’ve had with video games. Grinding out the perfect digimon can take a lot of time, but on the default difficulty, the games are easy enough that you can autobattle your way through the grind while watching TV or reading books, like I did. You don’t even have to build out the perfect digimon in order to complete the story; that’s just something I did for fun.

Across both games, I put in around 250 hours, and I was heartbroken when my PS Vita’s memory card corrupted and lost my saves, but man, were those hours a blast. With the new complete edition releasing on PC and Switch, it’s a great time to dive in and check it out.

GB Burford is a freelance journalist and indie game developer who just can’t get enough of exploring why games work. You can reach him on Twitter at @docsquiddy or on his blog. You can support him and even suggest games to write about over at his Patreon.