Back in September, Rockstar started adding weekly legendary bounties in Red Dead Online. These new legendary bounties have unique cutscenes, new voice acting and are designed to feel like big cinematic missions. The first two were great. The three since then have been as well, making legendary bounties some of the best content in the game.

The Owlhoot family bounty was offered during the first week of October. It consisted of capturing a notorious gang wanted for murdering and torturing innocent travellers. The family was the first legendary bounty that involved multiple targets, making it difficult to complete solo because players have to ride around the map to various spots, which takes more time when you are alone. And unlike most bounty targets, the members of the Owlhoot family were spread across a region of the map. This forced players to travel to different locations to capture all of the wanted family members.

Video of the mission. For some reason, my PS4 destroyed the screenshots I took of it.

Each location could be treated like a mini-bounty of its own and each felt different. For example, I played with a few friends and we split up to grab the various family members. My first target was just chilling alone on the side of a dirt path. His horse had died, and he was checking on it. So he was easy to lasso and grab. Meanwhile, the members of my posse found targets surrounded by large groups of enemies or hiding in cabins.

Once captured, the target needed to be brought back to a centrally located prison wagon. Once we were all done, my friends let me know they were a bit annoyed by how easy my target was to capture. The differences in difficulty added a lot of fun to the mission, as we argued over whose target was harder. (Definitely not mine.)

Last week’s target was a man named Sergio Vincenza who had defected from the army. He was now leading a group of fellow defectors and rebels. He was hiding out in an abandoned fire tower on a hill. Unlike the previous bounty targets, Vincenza’s men were highly trained soldiers and had even set up barricades and explosive traps. Getting to Vincenza wasn’t too difficult. I was able to sneak past some patrolling guards and reach his tower. Once I got to him, all hell broke loose. I tied up Vincenza and then used the tower to hold off waves of former soldiers, all of whom were trying to kill me and save their leader. They seemed deadlier than most bandits I’ve encountered in Red Dead Online.

Finally, I got away from the tower and got the target on my horse, but they didn’t give up easily. Their accuracy caused me to take some shots, nearly killing me. And then they critically wounded my horse. I’ve never encountered AI attackers who were this aggressive. I used some horse reviver and rode away with my target.

Cecil C. Tucker is the game’s current legendary bounty. He’s available today and for the rest of the week. He’s only 20 years old and wanted for burning a house down and killing women and children who were sleeping inside. Not a great dude.

He decided to hide with the Lemoyne Raiders, a group of former Confederate soldiers and loyalists who are also not great people. All of these bad folks were held up in a large wooden military fort down in the swamps of Red Dead Online. So I went down there alone and discovered that the Raiders didn’t even like this Tucker kid. As I hid behind some boxes, ready to begin my attack, a few of them discussed why they were letting this bastard stay there. 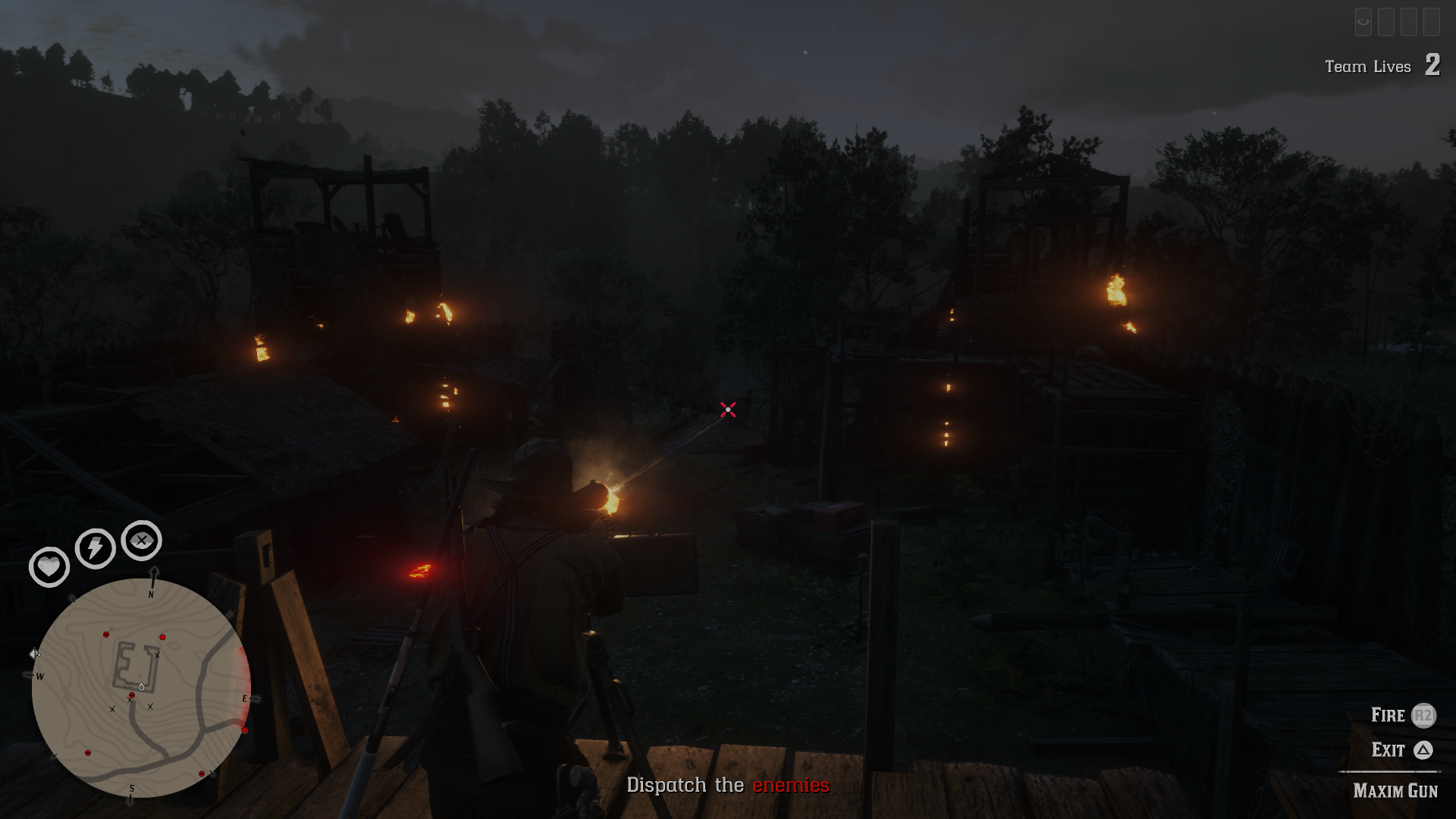 Once the fighting started, I was able to clear the base out quickly and easily. But the Raiders must have planned on getting attacked and had a counter-attack ready. I jumped on a turret and began firing as over two dozen troops attacked in various waves. As I did this, the fort burned around me and the Raiders. Eventually, my target appeared and I fought my way to the murderer. I roped him up and left as Raiders chased after me. Luckily, they weren’t as deadly as The Defector’s men.

Throughout the entire ride, Cecil Tucker cried for his mum and begged for forgiveness. I’ve never had a bounty target talk and cry so much. I almost felt bad for him. Almost. I still dropped him off at the jail.

Once players beat these missions they unlock harder versions that pay better and have more enemies.

Based on a video Rockstar released a few weeks back, announcing the new bounty targets, it seems like there are at least a few more targets left to capture in the coming weeks. I hope they continue to be as fun and interesting.

Red Dead Online at launch felt anaemic and rough. Over the last few months, Rockstar has really improved the game. These new missions are a big part of that improvement.

I also wonder if Rockstar will add any of the old targets back into the game at some point. Maybe have them rotate randomly every week? Or let players go to different areas in the game to take on previous legendary bounties? It would be a shame if all this great content was locked away and not playable in a few weeks.