Call of Duty Mobile Is Fun Even For Hardcore Players

Call of Duty: Mobile is an addictive multiplayer game that even the most casual mobile player can enjoy, but also one that even hardcore console players like myself might find to be surprisingly compelling.

Developed by Tencent’s TiMi Studios, Call of Duty: Mobile launched worldwide on October 1 as a free-to-play game for Android and iOS devices. Personally, I was sceptical of the replay value. How much would I really play a mobile Call of Duty when I already spend so much time on the console versions?

I admit I’ve never really had much interest in mobile gaming. Most of my attempts at gaming on the go have ended after only a few matches. I’ve downloaded and uninstalled the mobile version of PlayerUnknown’s Battlegrounds twice after only a match or two. Friends recommend mobile games to me, and I almost never make it through the tutorials. None of the games were bad, I just never really cared to play anything on my phone.

However, I’m a sucker for good fanservice, and I found myself enjoying the first few matches of Call of Duty: Mobile. The game contains a mashup of fan-favourite maps, modes, and characters from the older Dutys. There are classic maps like “Crash” and “Killhouse” from Call of Duty 4: Modern Warfare and “Nuketown” from the Black Ops series. There’s even a battle royale mode to compete with PUBG Mobile. It’s completely different from Black Ops 4’s Blackout map, but also boasts a mix of new and classic Call of Duty locations.

The iconic maps also look great on mobile. I played on my Samsung Galaxy S9, and it definitely beats the graphics of PUBG Mobile, but I expected Call of Duty to take that win. Sorry, PUBG.

In addition to the warm and fuzzy feelings of nostalgia, the controls are surprisingly good for a mobile experience. I expected to be really clumsy-thumbsy with my movement, but there’s a decent tutorial and several options to tweak your controls. Of course, you can be fancier than me and play Call of Duty: Mobile on a PC with the help of an emulator. A keyboard and mouse will probably make your experience even better than mine.

Mobile Call of Duty feels pretty padded with bots in the early levels, making this an easy game to pick up for really casual players or mobile noobs like myself. Once I gained more confidence aiming with the touchscreen, I moved from standard multiplayer to a ranked playlist, which seems to pair me up with more human players than bots.

Call of Duty is known for being an arcade-style shooter that is easier to pick up and play than most others in the genre, so it seems smart that the mobile version also caters to a wide range of skills. Call of Duty: Mobile even gives you the option to play solely against bots, and since you can select the “simple” hip-firing aim, even your cool, non-gaming grandma might be able to reach some major killstreaks.

Unsurprisingly, Call of Duty: Mobile is an absolute grind, a free-to-play game packed full of seriously outlandish microtransactions. There are several camos just for grenades, and I’m not totally sure why anyone would want camos for grenades or tactical equipment. You only see the equipment in your hand for a mere second or two before you throw it. Thankfully, you don’t need to pay anything to enjoy the game. You can just dodge all the offers to buy additional cosmetics or level progression with COD Points, Call of Duty’s digital currency.

Slow progression might make the battle royale fanatics antsy, as you have to reach level 7 before unlocking that mode. It also takes forever to just to reach level 33 and unlock a third weapon loadout for multiplayer. Call of Duty: Mobile wants you to become impatient, open your wallet, and speed things up by buying COD Points in bulk just to progress faster. 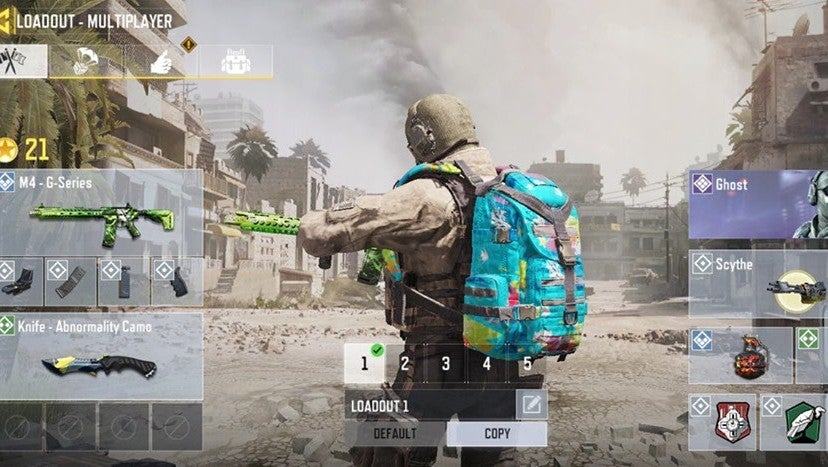 Don’t have many guns, but I did get this pretty backpack.

The weapon variants in Call of Duty: Mobile are mostly just pretty cosmetics. I do have some that offer a perk for slightly faster sprint or reload times, but I haven’t witnessed any guns with unreal stats like unlimited range or a huge fire rate increase. Stat-based weapon variants of that calibre would make the playing field extremely unbalanced, and would kill my desire to play this game.

For me, it seems to be nostalgia paired with the slow and steady grind that keeps me playing. I complete challenges and level up the same way I’ve enjoyed the progression in Black Ops 4, without spending anything extra to level up. It’s been a full week since launch, and I’m still playing the multiplayer and battle royale modes on a daily basis. This is the longest I’ve ever stuck with a mobile game.

I’m definitely not the only one jumping on the mobile hype. Reuters has already reported that the mobile version of Call of Duty has pulled in 100 million downloads in just the first week. This early success greatly overshadows the numbers of the competition, as the mobile version of PlayerUnknown’s Battlegrounds brought in just over 26 million in week one, and Fortnite only earned 22.5 million downloads in its first week on mobile.

Call of Duty: Mobile is a battery-draining juggernaut that is making a splash in the world of mobile shooters, especially in the battle royale realm. The game is definitely worth the download, especially for fans feeling the burnout from a year of Black Ops 4. Call of Duty: Modern Warfare releases on October 25, at which time my focus will likely shift back to console multiplayer, but I think it’ll still offer a good fix for my battle royale cravings.