By Alanah Pearce on at

Destiny 2’s latest expansion ends with a cliffhanger, one that suggests that it is the final set-up for a fight the series has been building to since the franchise debuted in 2014. We’ve got some theories about what it means.

The campaign’s final scene is mysterious. An unknown artefact transports you to a flowery, grassy plane, surrounded by floating black pyramids in the sky. “You made it,” says a character who looks exactly the same as you. “We have heard your cries for help,” it says, “and soon, we will answer.” Your character asks who this slowly approaching mimic is, and it says, “You don’t recognise us? We are not your friend. We are not your enemy. We are your salvation.”

What’s this all about?

This appears to be an encounter with The Darkness. That mysterious, alien force known as sometimes also known as The Deep has been Destiny’s main antagonist since 2014. We’ve never actually seen the Darkness, we only know that it is both worshipped and in some way controls or influences the Guardian’s most common enemies, such as the Vex, Hive, Taken, and Scorn.

In Shadowkeep, we’re finally actually confronting that foe – sort of. The expansion’s story starts with Eris Morn, a member of the Hidden and an expert on the Hive, being told something “old” is attracting the undead aliens to the Moon. She goes to investigate. Eris Morn isn’t heard from for a while, and a big, red, Hive-infested fortress is discovered on the Moon, leading the Vanguard to launch an attack.

Your Guardian character is part of that attack. After you fight a bunch of Nightmares, which are variants of older franchise bosses, you track down Eris Morn. She explains that the Hive and the Nightmares are connected to a Black Pyramid, which is an ancient, evil spaceship that she awakened on the Moon, though it seems it has been hidden in a cavern under the surface for quite some time. We know more of these are coming, because they were seen at the end of Destiny 2’s main Red War campaign (and even earlier in concept art for the first Destiny, pictured below). When Eris Morn tells us that the ships are connected to the Darkness, that pretty much confirms it: things are getting real.

These Black Pyramids are some kind of vessel for the Darkness, but we don’t know what they’re going to do just yet. What’s even more concerning: if the presence of just one of these ships has introduced Nightmares, and given the entire Moon a ‘haunted’ aesthetic, what is a whole fleet of them going to do? Naturally, Eris Morn wants to figure out what to do about the one Black Pyramid that has shown up and how to prevent something bad from happening, or what to do if something bad does happen, without really knowing what it is. We still don’t know. Throughout the Shadowkeep campaign she’s being haunted by Nightmares of her fallen fireteam members, and you’re sent to get some artefacts and armour to safely approach the ship yourself.

In the expansion’s final main mission you finally get to enter the big Black Pyramid yourself. When you get there, your supportive drone, or Ghost, seemingly gets possessed by the Darkness, and you fight a series of Nightmares of past enemies, while an unknown entity does its best to convince you that the Light is the harbinger of countless, repeated tragedies. This whole sequence expands on how much power the Darkness might actually have. We already knew it united races against the Traveler, the mysterious, spherical, terraforming orb that currently floats above Earth, and one of the known sources of Light. And we know that the Traveler effectively died to push the Darkness away from Earth. But we didn’t know it was also capable of haunting Guardians, both by bringing back past horrors and by manipulating our view of the force that the Traveler imparts to players’ Guardians, the Light.

After fighting the Nightmares and being lead through the ship by our Ghost, our first actual, one-on-one conversation with the Darkness takes place. The Darkness manifests itself as an exact copy of your character. This is an interesting choice with a whole lot of implications. It’s possible that, just as there are Nightmare versions of several of the series’ major enemies, that there are Nightmare versions of every Guardian, just like Dark Link in the The Legend of Zelda series. There could be a full race of Dark Guardians who have left the Light, or perhaps never served it at all. (In Shadowkeep’s Garden of Salvation Raid we learn about three Guardians who turned to the Dark in the. More on that shortly). Dark Guardians could also potentially be the fifth race we’ve only seen in concept art, who were pictured alongside large Black Pyramids which may well be the Darkness’ ships.

In terms of what that means for gameplay, there are a few exciting options here: first, that individual Guardians will have the choice to pick between Light and Darkness, just like the Horde and the Alliance in World of Warcraft. This theory is backed up by the Darkness giving us a sense of choice, in saying, “join the Darkness, or die,” during our conversation with it. It’s also possible Bungie will clone player-created characters as AI and have all of us fight against shadow versions of ourselves. Or, it simply means that’s the form the Darkness wanted to take to disarm the Guardian, and the act will never be repeated. Of course, it does mean we still don’t know what the Darkness’ true form actually is, and there’s a lot left to learn. 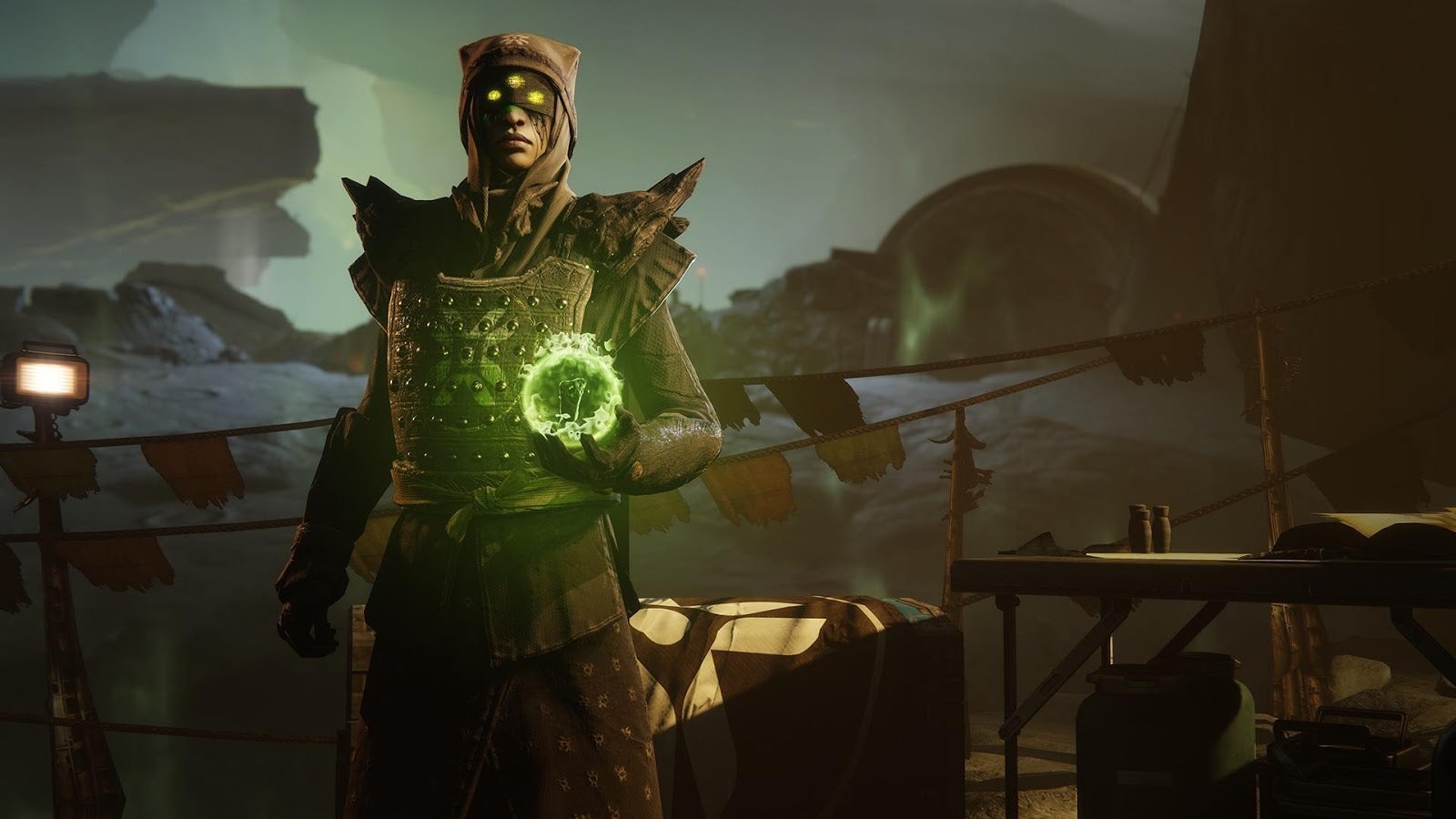 Eris Morn, still trying to figure it all out

Outside of the importance of the form the Darkness chooses to take, it’s also worth noting that the conversation takes place in the Black Garden, which is the grassy, flowery plain that the robotic Vex come from. The Black Garden is also the location of the final boss (the Black Heart, pictured above) in Destiny. We know the Black Heart was directly tied to the Darkness, and even though the Guardians defeated it, it seems the Black Garden remains a special location for the ominous enemy, and the Darkness’ link to the Vex remains present.

Having an actual conversation with the Darkness is a pretty big deal for your average Guardian, since very few characters in the Destiny universe have ever done so, and we only got so lucky because it wanted us to. Unfortunately, aside from the fact that it clearly conveys a threat and a warning, the interaction doesn’t give us a whole lot of clarity. There’s a lot the Darkness says that’s unclear, like the line, “We are not your friend. We are not your enemy. We are your salvation.” The entire final mission shows the Darkness putting a lot of effort into convincing you that it might not be that evil after all, and it’s possible Bungie will really challenge our perceptions of Darkness and Light in Destiny 2’s story going forward.

As soon as the conversation with the Darkness ends, you’re able to reconvene with Eris Morn, taking the artefact that teleported you to the Black Garden (or a vision of it) with you. Eris Morn warns that we should all be prepared for whatever is to come, and it’s discovered that the artefact emits a constant signal to the Black Garden. This brings us up to the Garden of Salvation raid that went live this weekend. It has the Vanguard send a Fireteam of Guardians into the Black Garden to discover the source of the signal. The Garden of Salvation’s final boss has you fight a sort of hive-mind leader of the Vex, called the Sanctified Mind, which doesn’t appear to be part of the Darkness, outside their races’ known alliance.

After fighting through the Vex, and deactivating the Sanctified Mind, the Guardians find the source of the artefact's signal, which is part of a statue. None of the Garden of Salvation Raid seems highly relevant to the ending of the Shadowkeep’s story missions, but it is worth noting that the flavor text for armour and weapons in the Raid includes quotes from three Guardians who are implied to have turned to the Darkness. They’re called the Kentarch 3, and it seems they somehow saw the future, and that lead them to question the Light. You can find the full quotes, which have been put in order, thanks to Wolfboy702 on Reddit.

Destiny 2’s story will continue. The plot is going to keep rolling out over the next 12 months as Bungie adds to it across several seasons of updates. The ending of Shadowkeep has ultimately lead to more speculation than any concrete answers, so feel free to let us know some of your theories in the comments below.

Alanah Pearce has been writing and making videos about video games for almost a decade, which is very financially at odds with her life goal; to go to space. Please tweet her words of encouragement here: https://www.twitter.com/Charalanahzard