You Can Fight Ghost Recon Breakpoint's Main Villain Right Away, If You're Foolish Enough

I’ll be blunt: playing Ghost Recon Breakpoint has been a drag. My initial ambivalence has given way to outright frustration as I trudge through generic military gameplay and the tangled web of pointless microtransactions. But Breakpoint has a twist that also offers a unique challenge. If you want, you can search and find the location of the enemy commander and try to take him out right from the start. It’s a seriously hard task, but the idea of skipping the gear grind and defeating the big bad certainly is appealing.

Ghost Recon Breakpoint starts by leaving the player stranded behind enemy lines, hunted by their former comrade-in-arms Cole Walker. Walker is a gruff, world-weary villain portrayed by The Punisher’s Jon Bernthal. He pops up throughout the story to hound the player and deliver simmering monologues. The goal, such as it seems, it to create an honest-to-God villain. 2017’s Ghost Recon Wildlands was lacking in that department. Walker provides a rival that players can eventually face off against, a fallen ally whose history with the protagonist ties into the main conflict.

Normally, you’d play through the story and earn loot and get stronger along the way so that you’re ready to fight Walker on equal terms. However, if you want, it’s possible to interrogate enemy commanders until you locate Walker’s base. At any time, players can rush to his location and try to take on the big bad boss. It’s similar to how The Legend of Zelda: Breath of the Wild allows players to rush immediately to Ganon. Breakpoint suggests that the player has a gear score of 150 or higher before doing this, but I decided to ignore that advice and give it a try.

Locating Walker isn’t particularly hard. I snuck into an enemy base, taking out soldiers until I reached their commander. Commanders can be interrogated to learn more about the game world. Sometimes, that means the location of a gun blueprint or nearby camps to rest at. I had selected the quest to locate Walker from my objective list, however, and that gave me the opportunity to ask where to find him. All it took was sneaking behind a few baddies and holding them a gunpoint to learn that, shockingly, Walker was the large base on the map I thought he’d be in. My gosh, who would have guessed it?

Sneaking into the base was easy enough. Breakpoint is not a challenging game. In fact, it’s often dead easy. Even when entering hostile territory with max level enemies, everyone can be taken out with a quick shot to the head. In some ways, that’s a good thing; it pushes back against the loot-shooter aspects of the game and avoids spongey enemies like what you’d find in The Division or Destiny. Unfortunately, it also erodes much of the challenge. All your weapons can be silenced, and you can simply jump from cover to cover sniping the most “difficult” enemies. My initial entry into Walker’s base was pretty simple, as I crawled through the moonlight and darted from building to building. I was eventually spotted after enemies heard my gunshots. The higher an enemy is in comparison to you, the more perceptive they are. I had ventured a little too close and drawn attention. Guards swarmed and I was swiftly dealt with. But even with that mistake, I felt confident I could find Walker and kick his arse. 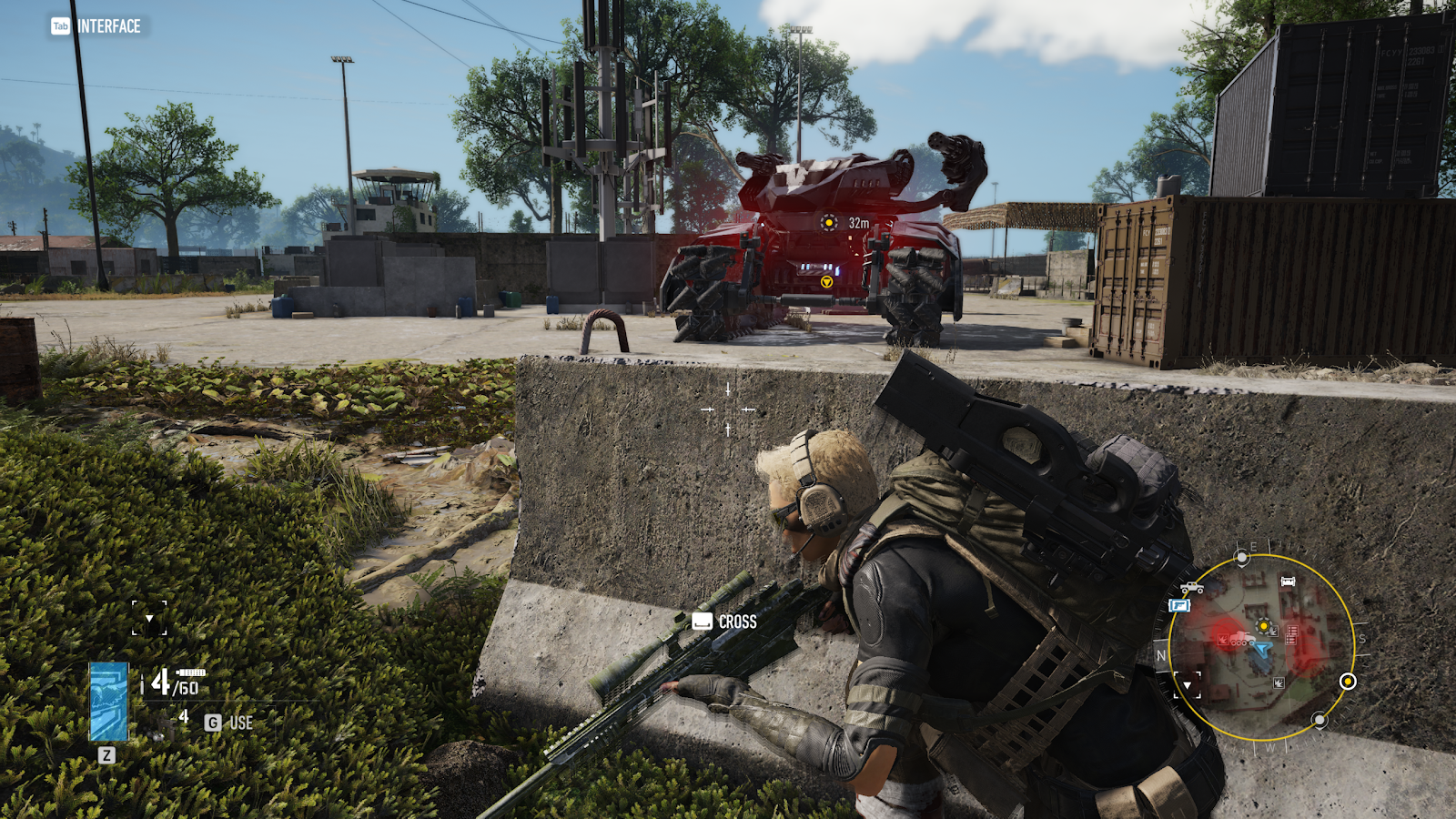 This is the beefiest beef gate boss since beef was first gated.

That was complicated on my later attempts. It is not hard to find Walker in his base; he is inside the largest building. Another shocker. What makes things difficult is the fact that the doors are locked until you defeat a max-level tank drone. It can blast you into pieces in a second, alerting everyone in the base to your presence. I was able to chip away at its health by firing armour-piercing bullets at its glowing weak point, but this thing is nearly 100 levels of toughness above me. Taking it out was a lengthy proposition, one made harder by the dozen of high-level thugs that swarmed my position every time I engaged. Maybe there’s a scenario where I slink through the base and take out everyone first. Maybe I could come with a team of fellow players and manage to succeed. For now, I’m done. Breakpoint hasn’t made it too difficult to get better loot, and while you can get higher-rarity gear in Walker’s base, you can never get loot that’s much stronger than your current gear score. With a bit of luck and some prep work, I’ll get this one.

Breakpoint has a unique structure, and it’s neat that I can try to face one of the most difficult fights whenever I want, but that’s been a small balm on a game that’s gradually losing me. Moments like this point to a more interesting game, one with a unique structure and tonnes of freedom. It might be cool to blow up a high-level tank and prove my badassery, but so long as I’m trudging through a giant world map to take out yet another base, this is more of a fun quirk than a game-redeeming feature.