Nintendo's Ring Fit Adventure Had Me Huffin' and Puffin'

By Victoria Song on at

If you watch the trailer for Ring Fit Adventure for the Nintendo Switch, it looks silly. A bunch of people around the world making idiots of themselves with the help of a giant flexible ring with a Joy-Con in it. A Ring-Con, if you will. On their left thigh is a holster with the other Joy-Con. They run in place in impeccably dressed living rooms, their faces scrunched as they rapidly squish and pull the ring. Safe at my desk, ignoring my Apple Watch’s pleas to get up and stand, I had the same reaction watching the trailer as I do watching someone play a VR game in real life. I shoved some Pop Chips in my mouth and said “nerds.”

As resident fitness tech guinea pig, however, I jumped at the chance to try it out for myself. Despite my initial prejudices I must admit the 20-minute demo was not only fun, but also left me feeling the burn. Turns out that when a game is fun you really don’t care how stupid you look playing it.

The game has a few modes. There’s a traditional story mode in which you try to defeat your arch-nemesis, Dragaux, a buff dragon in a leotard. Nintendo told me the dragon was meant to represent the “negative aspects of gym culture.” He does, indeed, look like every gym bro who’s ever flexed on you for using their favourite machine.

Running in place will make your character move in the game, and how fast you go actually depends on how much you hustle. At the optimal speed, your character’s hair lights on fire. You can also squeeze the ring to shoot obstacles or pull to suck up coins and other items. Pointing down with the ring while running will let you jump. Battling baddies involves using certain exercises as attacks. For example, 20 squats will beat up an enemy; to defend yourself you squish the Ring-Con into your abs in a move called “Ab Guard.” It takes some mild co-ordination – I had a hard time remembering how to jump in the moment. The Ring-Con is also much harder to manipulate than Nintendo’s trailer would lead you to believe. I played three levels total and my arms are still tingly as I type this. 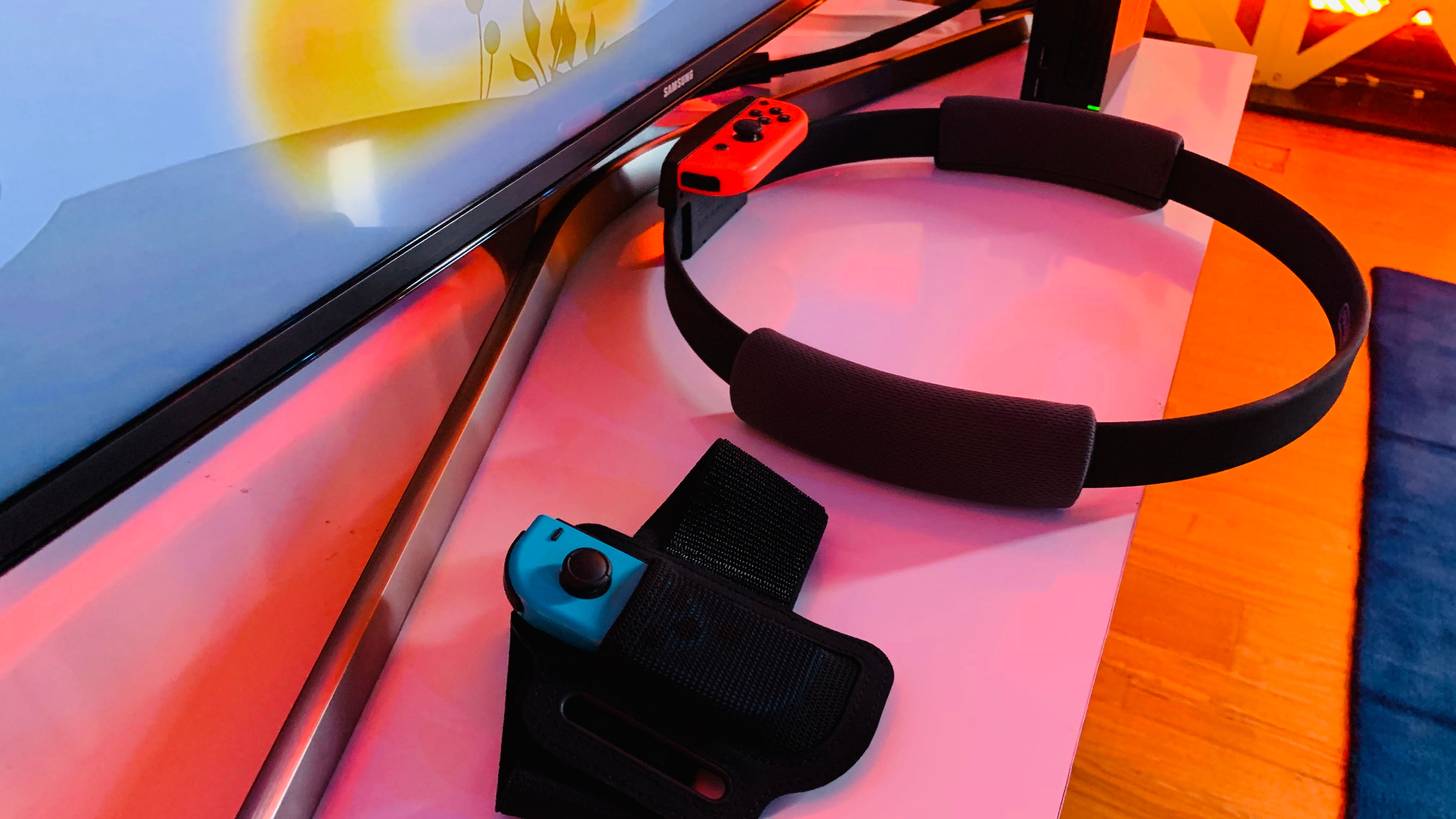 You can also play some sweet WarioWare-esque mini-games or, if you’d rather stick to the basics, you can do set exercises that target a specific muscle group. Of the ones I tried, the Squatter’s Wheel was the most challenging. You’re basically given a shape, which you then have to recreate on a potter’s wheel by squatting and manipulating the Ring-Con. Nintendo had me try working my pectorals by squishing the ring as many times as I could in a 20-second period. It sounds easy, but 70 reps left me out of breath and reaching for some water.

Another feature is that after each exercise, you have the option of sticking your finger over the Joy-Con’s IR sensor to get a reading of your heart rate. I’m not terribly sure how accurate it or the estimated calorie counts are. We’ll need more testing but I did happen to be wearing an Apple Watch Series 5 at the same time and the Joy-Con’s measurement seemed to average about 10 beats per minute more. That said, you’re definitely not going to burn as many calories as you would playing Dance Dance Revolution on hard (you don’t need as much co-ordination either).

As for the hardware itself, the Ring-Con is sturdily built. It basically functions as a sort of resistance band, though it’s impressive that Nintendo’s managed to stick a bunch of sensors inside it. I noticed some slip and slide with the leg strap, but not enough to actually detract mid-game. 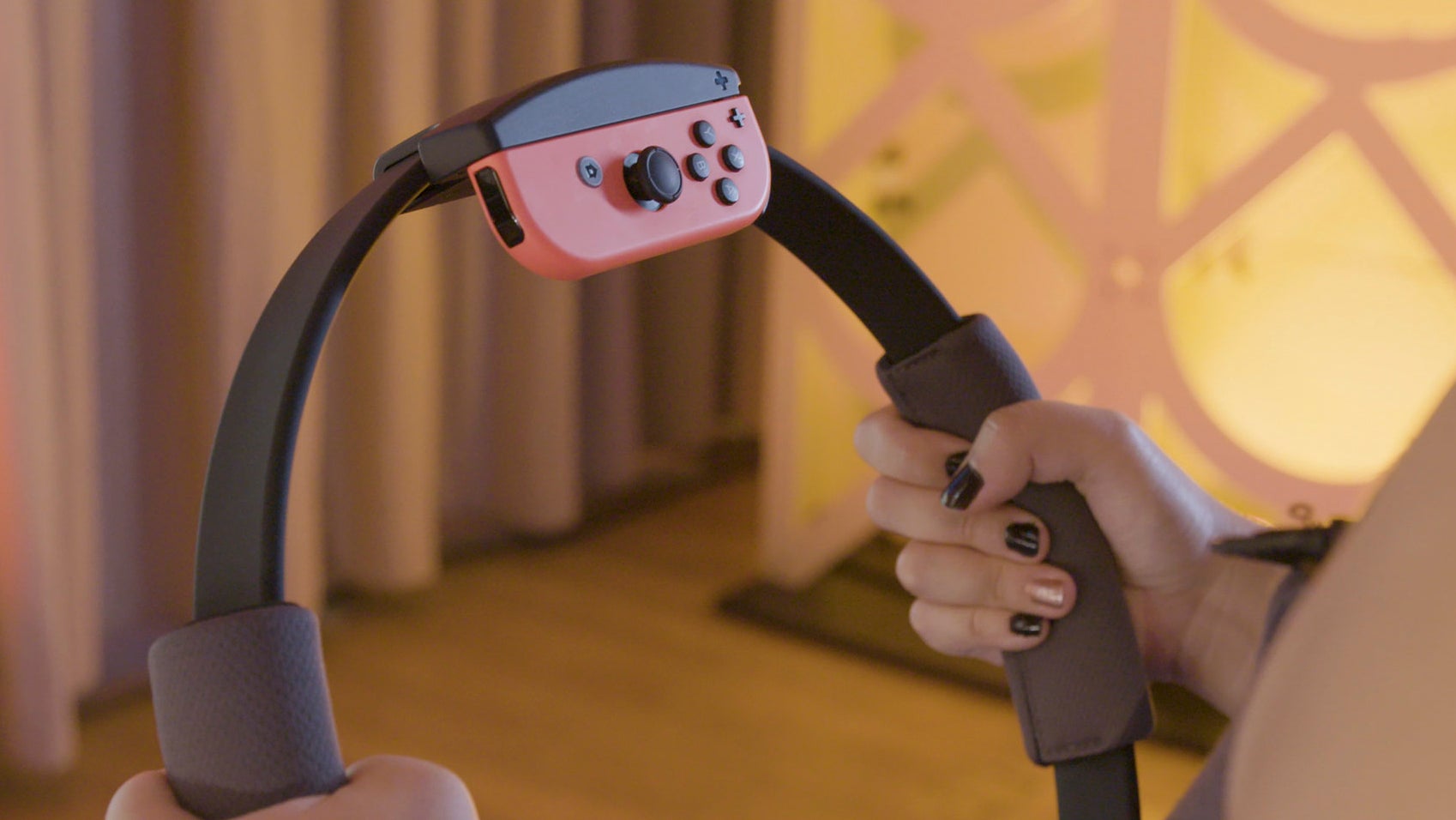 So, can you work your puff into tuff with Ring Fit Adventure? Ehh. It’s more like a spiritual successor to Wii Fit than a viable replacement for the gym. That said, it did get my heart rate up to about 130bpm (as measured by the seemingly more accurate Apple Watch), which definitely counts as cardio. It’s also nice that you get guided visuals for doing various bodyweight exercises like squats, chest-to-knee presses and planks.

As someone who absolutely hates strength training, Ring Fit Adventure seems like it could be a fun way of tricking myself into doing some bodyweight and resistance exercises for an afternoon. It’s available 18 October for £70. That gets you the Ring-Con, leg strap and the game itself. It’s pricier than your average Switch game, but you are getting hardware with it. Nintendo told me that if you played an hour a day in the story mode, you’d still get about 3 months of play before finishing the game. And trust me, an hour a day will be more than enough.