Call of Duty: Modern Warfare’s recent cross-play beta brought platforms together for large-scale, 64-player multiplayer matches. While it feels quite different from Battlefield, the new style of gameplay worked quite well.

The “Ground War” mode itself is not new, but in previous Call of Duty games it just meant a slightly increased player count of 12 to 18 players on standard multiplayer maps. Modern Warfare goes much bigger in this new 32v32 mode with a five-flag Domination objective, featuring the chaos of tanks, helicopters, and ATVs.

Karst River Quarry was the only Ground War map available for the beta, but it really showed that Infinity Ward has put a lot of thought into map design. I’ve made some complaints about the maps encouraging players to camp too much, and how Modern Warfare maps have a shit-tonne of doors, but I do appreciate that each map is designed for specific modes.

Just like how its smaller maps are tailored specifically for the 2v2 Gunfight mode, Karst River Quarry was designed for large-scale multiplayer, with every play style in mind. There are steep cliffs where snipers can prey on the players rushing between objectives, clusters of buildings that provide close-quarters gunfights, plenty of places to mount a light machine gun and defend, and just enough road to be a nuisance in the tanks. 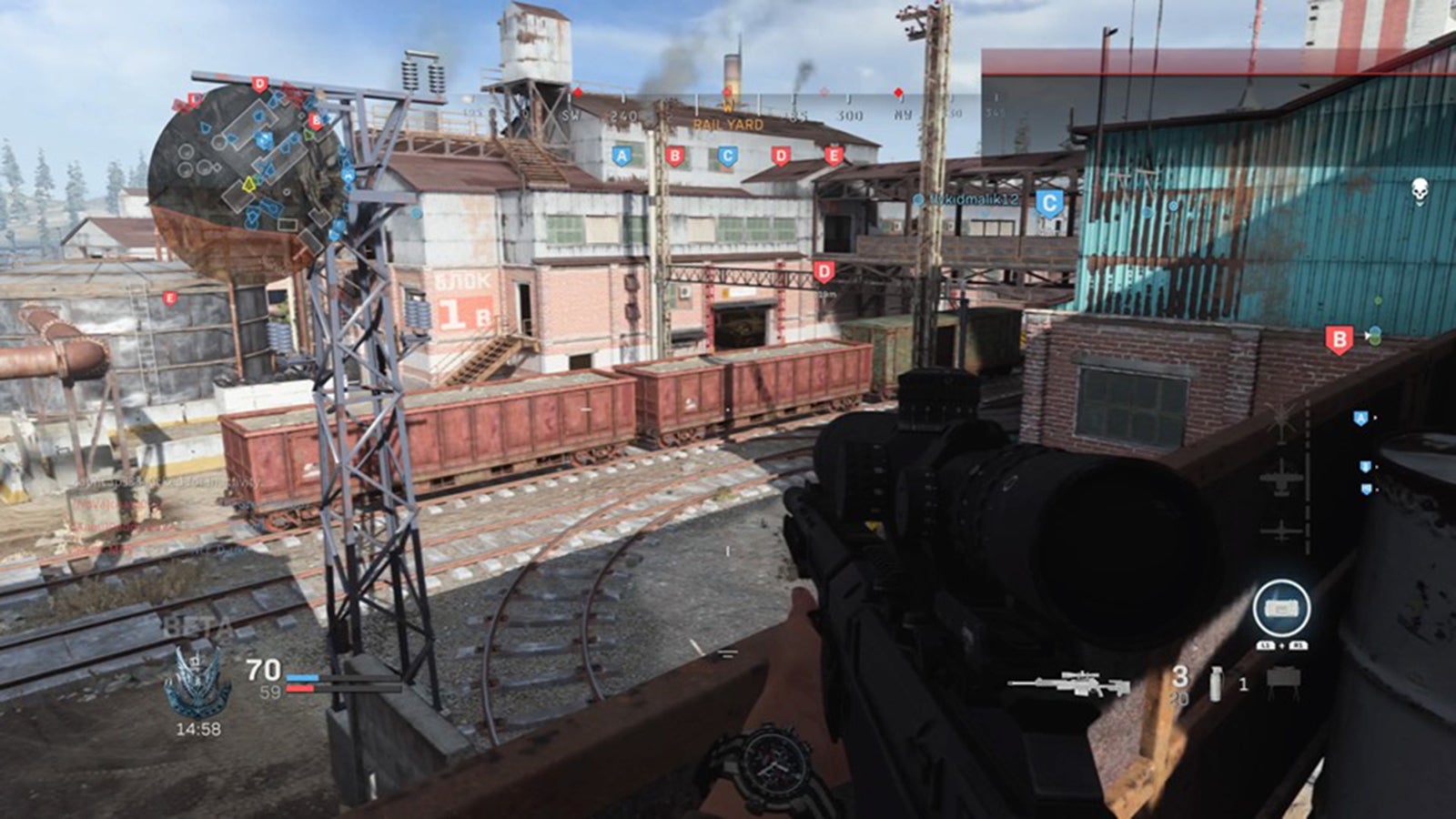 I’m not saying the map design is perfect. Karst River Quarry is a large map by Call of Duty standards, but it doesn’t quite compare in size to Battlefield’s, so the Domination points are much more condensed. The quarry’s five capture points are also fairly linear, and the buildings at B,C, & D points got really congested. I’d love to see other Ground War maps have more staggered objective points to make better use of the full layout.

Much like Battlefield, Ground War also gives players the option of where they want to spawn. You can choose to spawn in a friendly tank, on a squad mate, a capture point that’s occupied by your team, and more. There were some spawning issues uncovered during the beta. Some players spawned under the map, while others awkwardly spawned in the air and fell to their deaths. I didn’t personally experience these extreme issues with the spawns, although the game would occasionally ignore my spawn point of choosing and send me back to the home base, away from the action and often an inconvenient place to spawn.

Spawning on your squad can also be an awful experience, especially if you’re risky enough to spawn on a random squad mate. Ground War will not hesitate to spawn you in a room surrounded by the opposition or even in the line of gunfire. This feels worse than the spawning in Battlefield, but the condensed layout of Karst River Quarry probably factors into that. I quickly learned to ask my friends if they were safe before choosing to spawn on them.

Despite all the comparisons, Ground War still feels like you’re playing Call of Duty, and this opens up options for people who want more action than the standard multiplayer can provide. The buildings aren’t destructible here, but you can go for those massive Call of Duty killstreaks. Facing a 32-player opposition allowed many players to earn the game’s highest killstreak, “Tactical Nuke,” which is earned by accumulating 30 standard kills in a single life.

I played the beta on a PlayStation 4 Pro, and the performance was generally pretty solid for me. There were occasional hiccups where my gun would freeze up in the reload animation, or times where I would be running through high-traffic areas and experience a significant frame drop. These issues were minimal and didn’t impact my enjoyment of large-scale Call of Duty. However, some players reported blue screen errors and crashes across all platforms. Hopefully Infinity Ward can make some positive tweaks to the spawns and improve performance before Modern Warfare launches on October 25.