Patrick Ewing, creative lead for indie game Neo Cab, told me a story about how he once got an Amazon package delivered by a person with the number plate “Uber God.” The Uber God had actually been fired from Uber that week, he told Ewing, after five years and over 19,000 rides, following an anonymous customer complaint. The harshness of the situation – working for and ultimately getting fired by an app for obscured reasons – struck Ewing. This story felt like it could have been drawn straight out of Neo Cab.

“The Uber God was terminated essentially by email with no possibility for appeal,” Ewing told me in a Skype conversation this week. “Who does these systems benefit and why did they get to be this way? Could we have the ease of use of an Uber app without creating a bunch of suicides from traditional taxi drivers who will never make the money back on their medallion, or having a fairer opportunity for this guy to find out why after 19,000 rides he’s out of a job?”

Neo Cab, available now on Apple Arcade and coming 3 October to computers and Switch, doesn’t make suggestions on how to improve ride-share apps like Lyft and Uber. Instead, it explores their human consequences on both riders and drivers. The game takes place in a futuristic California that’s more or less run by a corporation called Capra. Protagonist Lina moves to the big city of Los Ojos, where Capra runs a hotel chain and a fleet of self-driving taxis. By the way, Capra also has its hands in political policy and the police department. Lina drives for a ride-share company called Neo Cab, which is portrayed as an outdated but more approachable alternative to Capra’s self-driving car service. At Neo Cab, humans still drive the cars, and none of the users’ data is collected for corporate ends.

Lina ostensibly comes to Los Ojos to live with her hometown best friend Savy, but early on in the game, Savy goes missing. Lina has to balance tracking her down with making money by picking up fares. She also has to keep her driver rating up by being nice to her riders, even when they climb into the back of her cab and start spouting off their opinions on cars, Capra, politics, or Lina herself. The player selects fares through an app-like interface and talks to riders by choosing between dialogue options. Over the course of the game, Lina picks up a member of a radical anti-car political group, a tech worker hoping to make all human drivers obsolete, a photographer who wonders how much corporations shape the scenes he captures, and two German tourists who perform a twisted version of a Voight-Kampff test to see if Lina isn’t just a very convincing AI. Though Lina’s job is ostensibly to take people where they want to go, her riders aren’t shy about using her as an excuse to hear themselves talk.

Ewing, who previously worked on Firewatch, says Neo Cab’s story was inspired by thoughts he had during his time living in Silicon Valley. “It started with the idea of the gig economy and specifically the dynamic of being rated by strangers,” he says, which “immediately lent itself to being a driver in a big city.” Silicon Valley left him with some “healthy scepticism for disruption,” Ewing said. “-It’s just sort of an unexamined thing that the good thing to do is come into an existing industry, turn it entirely upside down, get extremely rich, and then trust that it will all work itself out… You’ll definitely hear Silicon Valley people and investors just be like, ‘The Bronze Age had to turn into the Iron Age, everyone had to get retrained,’ and...” He ended this sentence by making an energetically disgusted sound, then continued: “Eventually, yes, but there’s a lot of human wreckage.” 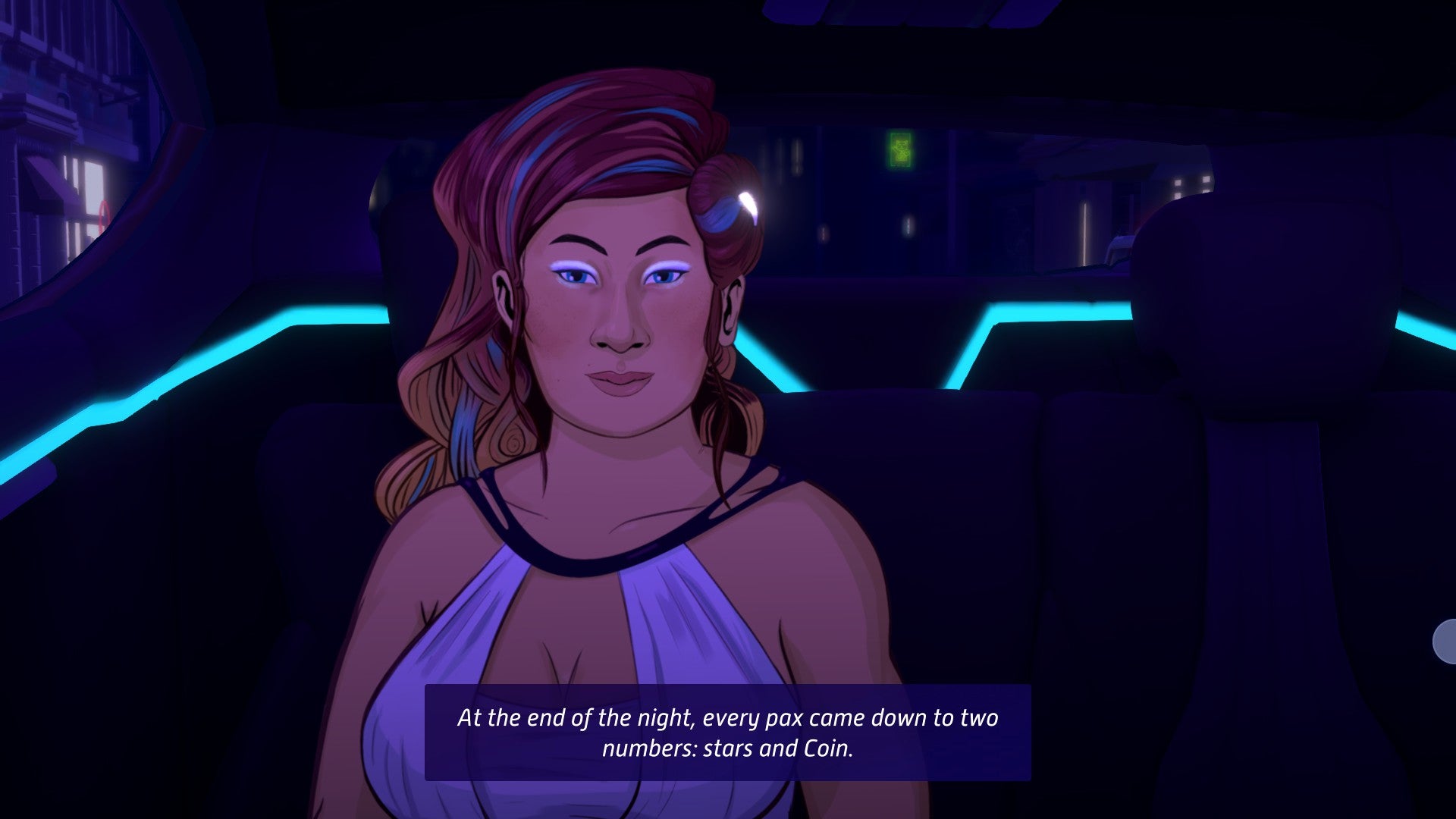 Neo Cab’s world, which you glimpse from the windows of your car and learn more about in your conversations with your fares, feels like a more extreme version of our own, one where our daily choices about technology have resulted in a societal shift. As a human cab driver, Lina is the last of a dying breed, and the people who are drawn to the human touch of Neo Cab all have their reasons for doing so. Some want to avoid Capra’s reach, others find a human driver quaint, and still others seem to just want to dunk on Lina for not getting with the times. Characters in the game have complicated opinions – “There’s no pure good or bad character in the game,” Ewing says – and Lina has to negotiate whether to agree or disagree with them in order to keep her driver rating up.

As I played Neo Cab, it occurred to me that Capra’s self-driving cars would prevent a lot of the unpleasant interactions Lina deals with, but automation isn’t presented in the game as a blanket good or bad solution. Ewing cites Uber’s stated goal of doing away with human drivers as one of the issues with which Neo Cab grapples. Lina is obviously interested in keeping her job, but even she has some ambivalence. There’s an underlying question throughout the game about whether humans, with their complicated emotions and motivations, are worth the hassle.

This look at humanity also plays out in Neo Cab’s emotional system, called the Feelgrid. In the game’s fiction, the Feelgrid is a piece of wearable tech that uses a colour palette to tell the user what they’re feeling. Between colours representing major emotions like anger and sadness are shades representing gradations of those feelings. What colour Lina is on the Feelgrid will open up or close down certain dialogue options or clue riders in on whether Lina disagrees with them or is humouring them.

The Neo Cab team experimented with several different systems before landing on the Feelgrid and its plethora of shades. Ewing says, “I always think that’s an amazing thing where someone says something that should piss you off, but you manage to keep your shit together and be firm with them but kind, and not just try to dunk on them or something. All those interactions are very interesting to me, and I thought we were only going to get that by making the emotion system visible.”

The Feelgrid also plays a role in the game’s plot and its investigation of data collection, as well as Lina’s relationship with Savy. The FeelGrid most swerved into focus for me when Lina’s emotions conflicted with my own: when I was told she was angry when I wasn’t, or when she would steer a conversation away from a topic, citing her emotions, when I wanted to pursue the topic. These clashes made Lina feel less like an avatar and more like a person I was riding alongside.

“We kind of walked the same line as on Firewatch,” Ewing said when I mentioned my disagreements with Lina. “Lina’s a real person with a real past and real attributes, but there’s enough play for the player to express themselves and make it their Henry or their Lina… Occasionally you’re going to get pulled out...you’re not always going to be perfectly matched.”

This disconnect didn’t always work for me, and I sometimes felt frustrated when my dialogue choices were limited. The emotional awareness the Feelgrid provides is a pivotal part of the game’s culminating moments, though, and there are also multiple possible endings. Despite how heavily the interplay of humanity and technology plays into the end of the game, Neo Cab leaves many of its bigger ideological questions for the player to sort out for themselves. 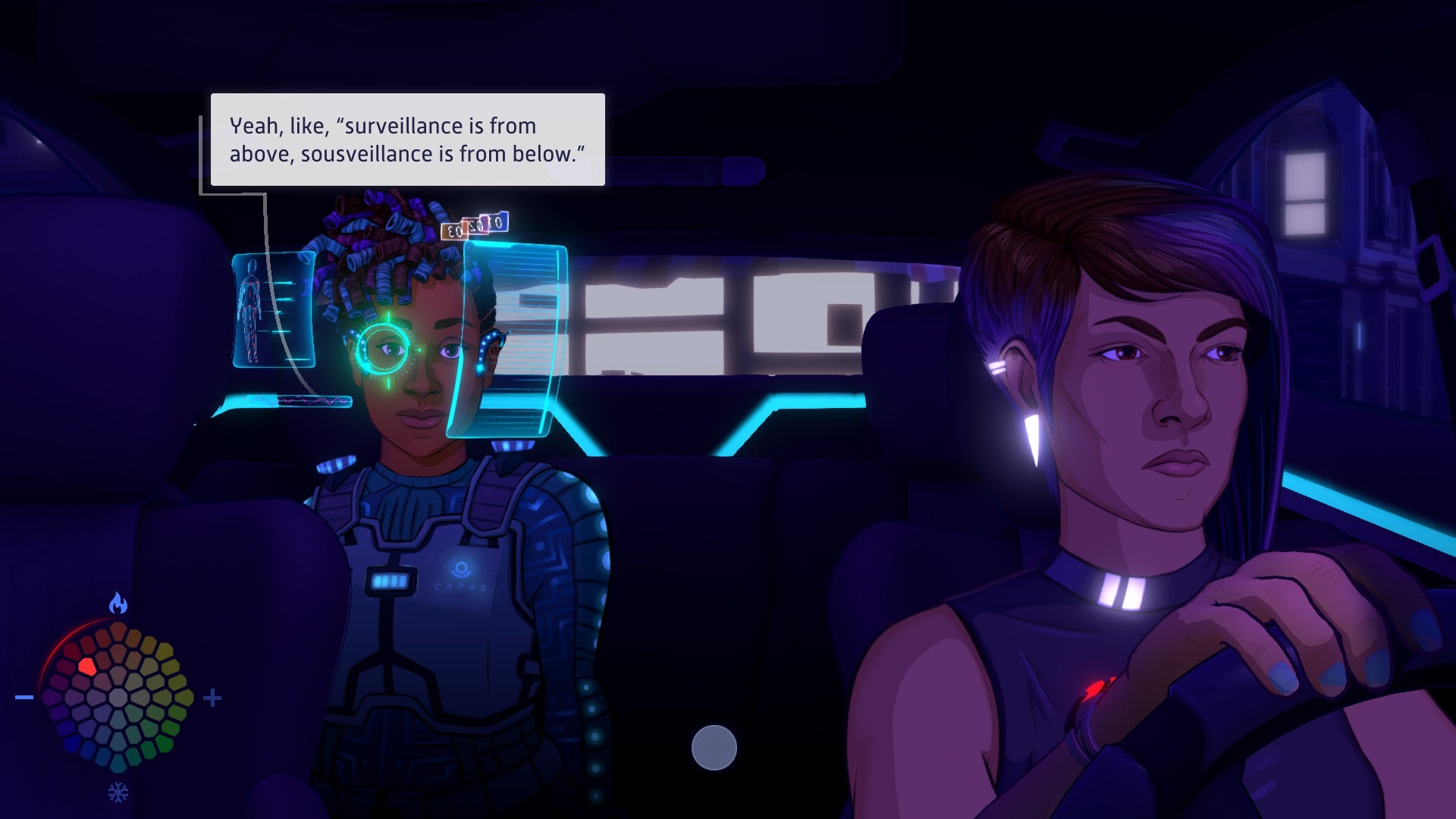 Personally, I don’t have the Lyft or Uber apps on my phone. Somewhat nonsensically, I find the idea of hailing a car through my phone rude. The five or so hours I spent with Neo Cab’s Steam build both made me question that and also feel a little bit better about sticking to public transportation. It also reminded me that ride-sharing, like so many gig jobs, puts people together, for better or worse. Even if Uber wants to make human drivers obsolete, its entire business model is based on where people want to go and what brings them out into the world to interact with others.

At its core, Neo Cab is about that. “There’s a generalised feeling that there’s got to be a better future than this,” Ewing said, “but at least within it, we can find connection, we can find purpose, we can do a little good.”