Sayonara Wild Hearts is a shining example of using a game’s design to say something meaningful while also making it look cool as hell. The game controls simply with the analog stick and a single button. What makes it stand out is its music, its look, and its mood.

Check out the video to see (and hear) the game in action.

Sayonara Wild Hearts tells the story of a young woman who experiences devastating heartbreak and, in the wake of that, discovers a much larger framework to the universe that she must navigate in order to restore its balance.

You control her as she runs, flies, or drives through a series of levels. Each part of the game is set to different song that matches the mood of a particular encounter.

You are on rails the entire time, reacting to the world around you as it zooms past you, avoiding obstacles, aiming for collectable hearts to rack up points, and pressing a button in time to jump to a new platform or attack an enemy. 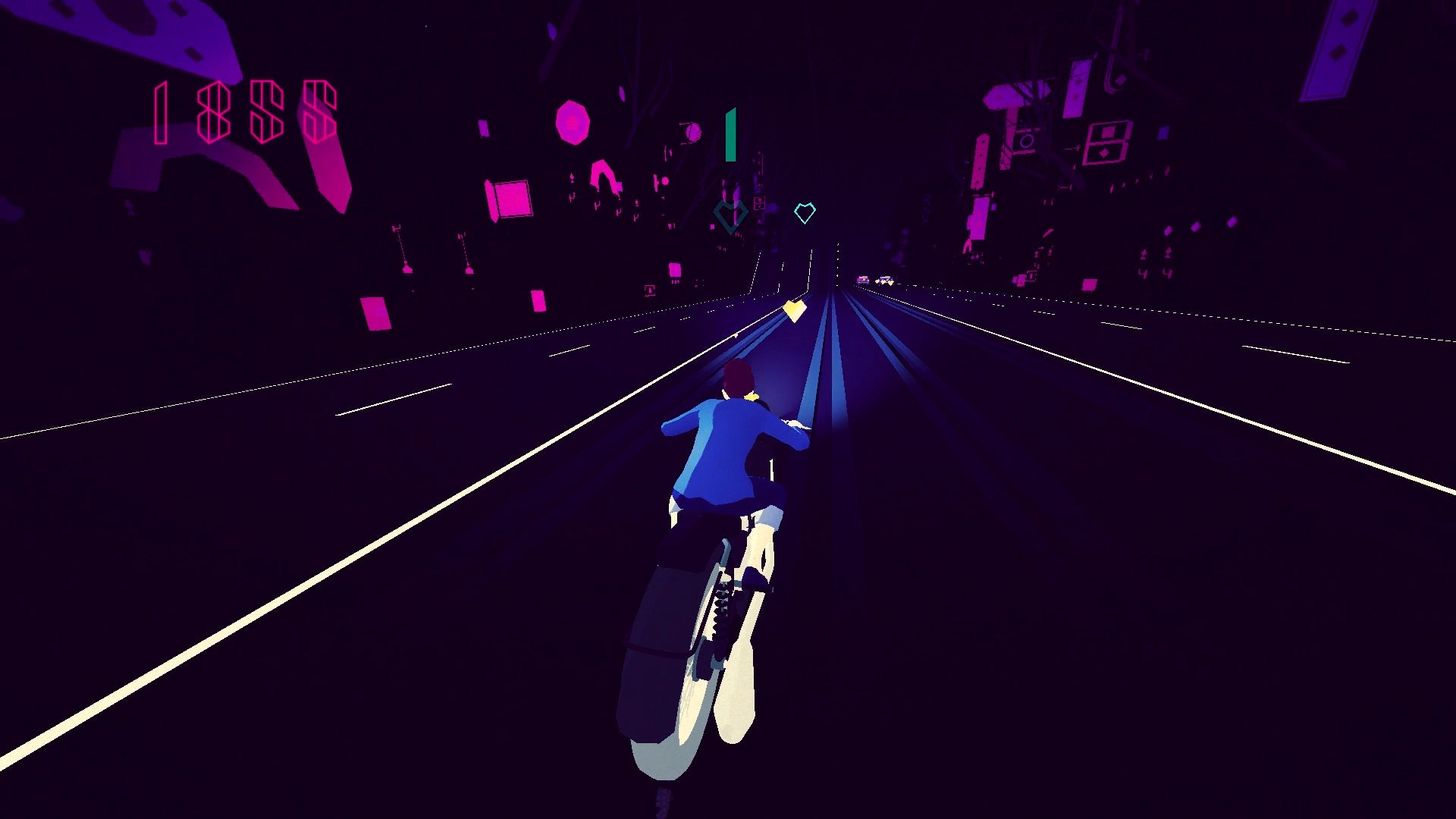 These levels never require you to do more than move the analog stick in a direction and press a button at the right time. Each level is fun the first time and shines even more after repeated play, encouraging you to squeeze every bit of pulp out of a personal high score.

The variety of ways that Sayonara Wild Hearts experiments with its two basic inputs is straight up magic. One minute the game is an on-rails runner that has you narrowly avoiding obstacles, the next, it’s Rez, throwing enemies and projectiles at you that you need to highlight with a cursor and shoot.

Sayonara Wild Hearts keeps you guessing. That constant shakeup teaches you how to play and how to navigate new obstacles, but more importantly, it allows you to experience something that is equal parts fun and meaningful. Each level of the game is a beautiful and almost hypnotising parable about fighting internal demons and overcoming mental hurdles. 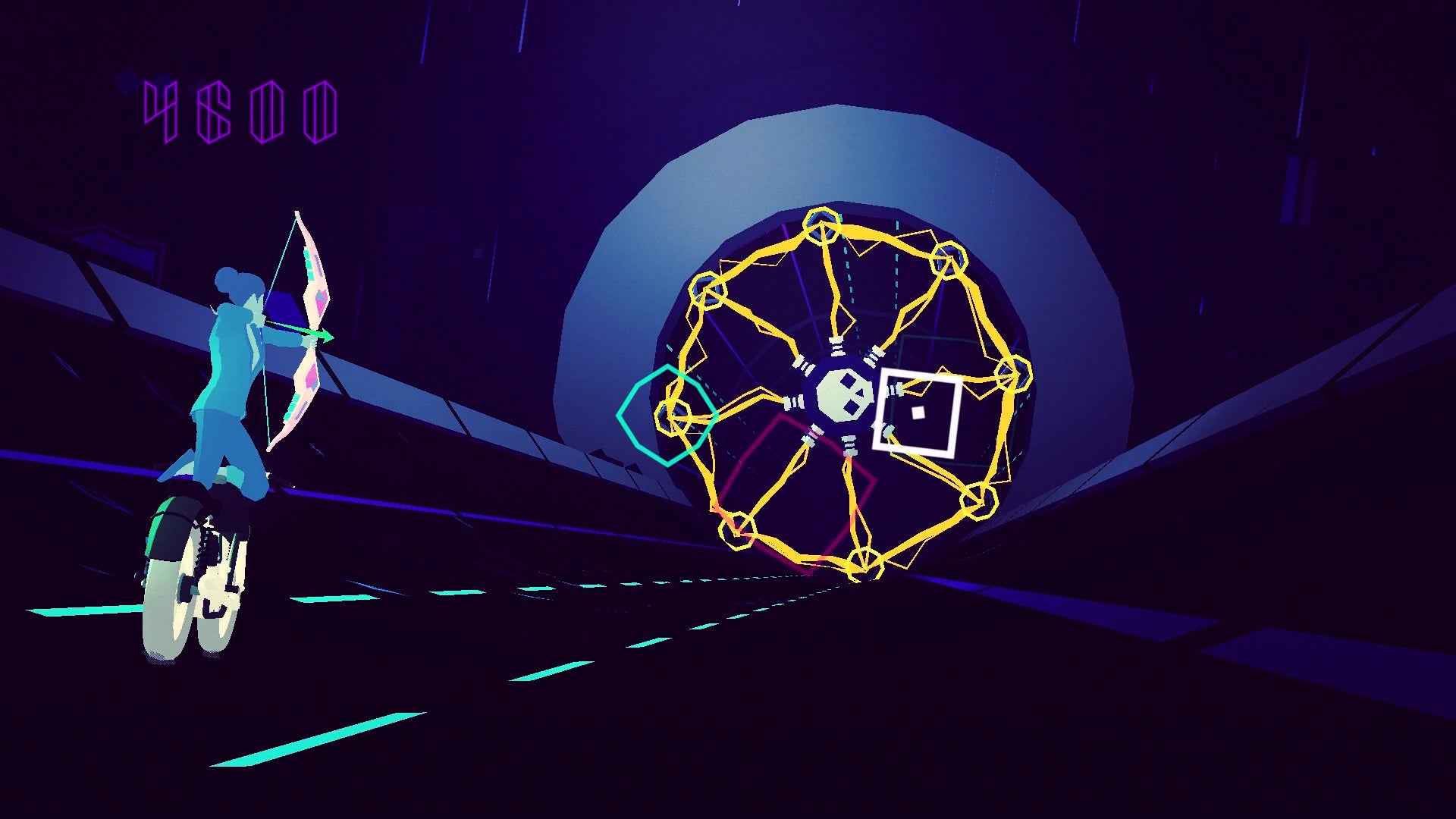 My favourite level, and one of the more challenging ones, is called “Parallel Universes.” First, it has you attempting to remember the placement of certain obstacles along the way in tune to the music. Throughout that, the level switches back and forth between two different versions of the world.

As you speed through its highway on your motorcycle, changing lanes to collect hearts and narrowly avoiding obstacles in the road, the level shifts back and forth from one reality to another. It’s up to you to commit the placement of different obstacles in each world to memory so you can swerve to avoid them.

As I played, I trained my eyes hard on the middle distance, trying to concentrate on where I was headed. I kept failing. That is, until I noticed a pattern.

I wasn’t listening to the music, so I had missed the simple repeatable pattern that the game was trying to teach me. I had instead been trying to react to the obstacles as I saw them. I needed to stop thinking and feel it instead.

The moment I let go and actually listened to the rhythm, my instincts took over. I felt the movement the way I used to when reading sheet music. Once I learned the sequence and installed it in my muscles, I could add some finesse to the performance.

Most games want you to focus on their systems and find efficient ways to master them. Sayonara Wild Hearts’ systems tell you to learn them, and to borrow a phrase from Obi-Wan, “let go your conscious self and act on instinct.”

BACK OF THE BOX QUOTE: "Young Hearts Be Free Tonight"

TYPE OF GAME: Platforming, rhythm, action, and tonnes of music.

LIKED: Was blown away by the simplicity and its hypnotising music. Loved the narrator, too.

DISLIKED: Some levels can feel a bit too floaty.

PLAYED: Finished in about an hour. 4+ hours total (so far)

In one of the other standout levels, titled “Forest Ghost,” your character starts off by swerving to collect hearts while in pursuit of a runaway deer. After jumping on that deer, it’s up to both you and the deer to work in harmony, zig zagging through the world as you press a button to jump onto different platforms. The game’s music in this section provides the perfect accompaniment for this hypnotising hand-eye coordination, reminding you to listen and feel.

The first time around, I played the game with my Switch docked, because it certainly benefits from cranking up the volume. If you’re playing in handheld, use a solid pair of headphones to help you focus on the rhythm even as you play on the smaller screen.

The game’s soundtrack is half of the reason to play it. If you’re not into a mix of electronic gems and catchy dream pop songs, then it might just not hit for you.

Same goes for the rest of the game’s aesthetic. Everything down to the typeface selection in the menus, which flashes and dances to the beat, has been immaculately packaged to convey a specific love-it-or-hate-it vibe.

It’s undeniably cool, and if it’s not your thing, then Sayonara Wild Hearts is like, whatever. It wants to take whoever does love it and ride off into the neon sunset with them.