In many ways, Spiders’ latest, Greedfall, does what it sets out to do. It provides a role-playing adventure comparable to BioWare’s most compelling narratives, with companions to meet and recruit, quests to discover, and more. But Greedfall’s tendency to settle for the barest possible option constantly weakens it. Whether that is an unwillingness to reckon with its fraught setting or an inability to let players actually role-play, Greedfall is a game fraught with compromises.

Spiders is the French studio behind clunky oddities like 2014’s Bound By Flame and 2016 action-RPG The Technomancer. They produce games that are both charmingly scrappy and in over their heads. Greedfall, their largest game to date, feels mostly like the latter. While there’s often consideration in the small details – intricate crafting systems, clever ways for players to complete quests⁠ – it stumbles as a whole. Whether it’s the variety of glitches ranging from magically appearing characters to deadly game crashes, or the revelation that Greedfall’s systems exist in service of an ultimately vapid story, the game doesn’t hold up to scrutiny.

Set in a fictional world modelled after 18th-century Europe and early colonial North America, Greedfall casts players in the role of De Sardet, a diplomatic representative of a merchant’s guild. As a strange plague called the Malichor runs rampant on the old continent, De Sardet sets off across the ocean alongside their cousin in order to find a cure. The destination is Teer Fradee, a magical island whose strange powers might provide means to eliminate the Malichor. Aiding their aforementioned cousin – the newly appointed governor of a port town – players must navigate the intrigue of Teer Fradee’s various factions. Success rests more on a silver tongue than a steel blade.

BACK OF THE BOX QUOTE: "My name is De Sardet. I am legate of the Merchant Congregation here on Teer Fradee."

Greedfall will feel familiar to anyone who has spent time with western RPGs over the last five years. Players accept missions from faction leaders, some of which offer branching paths depending on key decisions. There is a small assemblage of companion characters with personal stories to pursue, pasts to unearth, and potential romances to ignite. There’s faction reputation to manage, as taking sides during quests starts to affect De Sardet’s relationships. Completing quests is a mixture of navigating dialogue trees and dealing with combat if things take a turn for the worse.

There are moments when Greedfall comes together. I like my companions, like Vasco, a sailor with the Nauts – a guild that takes its members when they are young – whose real family I helped locate. I engaged in an intrigue with Petrus, my scheming clergyman mage, and uncovered a scandal at the heart of the Church of Thélème. At one point, a faction staged a grand coup, and I found that because I’d not completed a companion questline, I was forced to fight one of my friends. When the time came, I slit their throat for siding against me. I hiked over hills and came face to face with gnarled monsters unlike anything I could imagine. I uncovered secret truths about my lineage and the history of Teer Fradee.

Greedfall often offers multiples ways to solve a problem but never manages to be consistent in what you can or cannot do, making its approach to role-playing feel attentive but incomplete. Take a common scenario: There is something inside of a restricted area that you need to find, perhaps a forged document or a shipment of special tools. One option is to simply trespass and kill everyone in your way, damning you in the eyes of the faction you have crossed. That’s not a particularly great idea. Instead, you might craft a sleeping potion to knock out the guards if you’ve invested enough into your Science skill. If you want, you could even procure a disguise to that you can walk around freely without arousing suspicion. With a high enough Charisma score, you can bypass all of this entirely with some smooth talk. Greedfall delights in minor divergences that allow players to fulfil archetypes: the brash sell-sword, the soothing conversationalist, the clever scientist.

But Greedfall is a role-playing game where there is very little room to play within your role. De Sardet is little more than a cipher that sucks up loot and completes quests. Greedfall’s writing is limited, its dialogue trees remarkably utilitarian. As a result, there’s very little opportunity to learn more about who you are dealing with, take stances, or else do anything that might add colour to your interactions. Often, it is a gamble whether or not your various skills will even be relevant. Wait, if I have max Charisma and Intuition, why exactly can’t I engage in some diplomacy here? It’s never clear why certain options can or can’t be explored in different situations, and there are rarely opportunities to respond to events outside of asking where to go next. 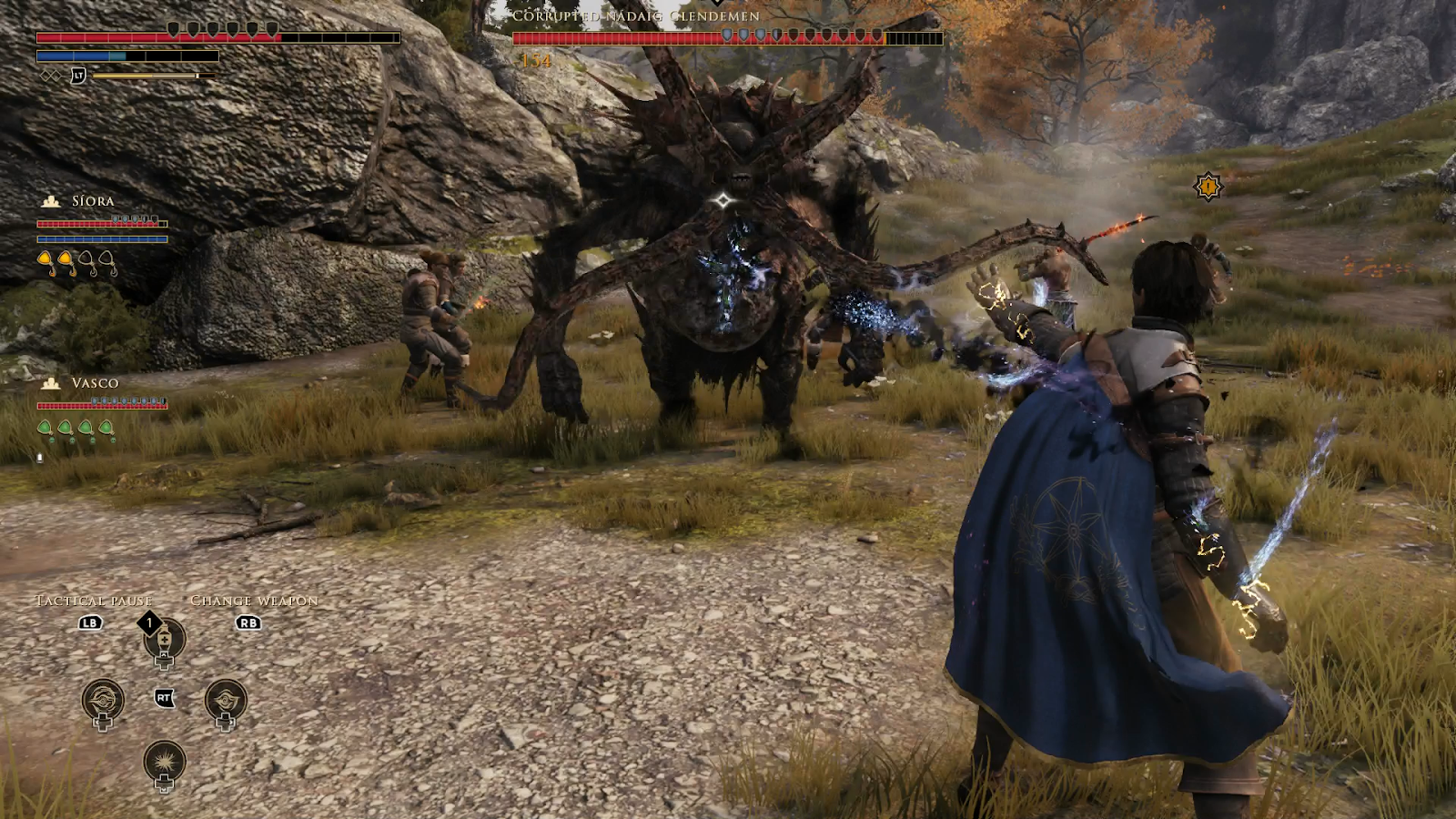 When the player does choose to engage in combat, there are plenty of interesting options. Players can use the usual swords and hammers, but Greedfall also offers magic and a variety of firearms, from matchlock pistols to smoke-belching arquebuses. Specialising in a magic build might grant you access to shadowy powers that allow you to freeze enemies in place. With the right specialisations, your stasis fields can emanate a corrosive rot that burns away enemies’ armour. Pouring points into one-handed blades allows access to acrobatic rolls and deadly slashes whose animations feel lifted from the performance of a skilled sabre-master. If combat proves too hectic – although this never seems to be the case on the default difficulty – you can pause the action entirely with a button press and carefully select your next move. All of this works. The smallest gears of Greedfall turn with a surprising intricacy, but their relative quality is not enough to sustain the 30-35 hours it takes to complete the game.

The greatest problem is Greedfall’s inability to do anything with its colonial setting. The landscapes of Teer Fradee are gorgeous, but in adopting the imagery and pageantry of the 18th century, Greedfall inextricably ties itself to that era’s problems. You cannot simply, as Greedfall often does, have people in funny hats or Inquisitors choking “savages” and assume that putting these things on display is sufficient commentary. The iconography of colonial conquest demands a reckoning. Greedfall has pretensions of commenting on its setting but does not muster a meaningful statement. From time to time, a settler might do something questionable and Siora – your only native companion – might say something like, “And they dare to call us savages?” There are zealous fanatics whose plots you end, but these are always the works of rogue actors rather than a systemic issue inherent to church doctrines. Whenever Greedfall starts to say something, it inevitably undercuts itself.

Colonialism is Greedfall’s raison d’être. Spiders CEO Jeanne Rousseau has been open about the influence of Baroque artists and the journal writings of explorers on Greedfall. In referring to these influences, the intent appeared to be to seize upon the sense of wonder evoked in fraying paintings and yellowed journal pages. But video games are not beautiful facts in the way that mountains and clouds are. Games are layered. You don’t behold them in their complete glory and make a broad decision that wow, isn’t that something special. Greedfall evokes the work of conquerors, of expansionists. Their awe and wonder came from a particular position, one which is imparted throughout Greedfall: This world was made for us, and thank God we’ve finally arrived.

An initial concern I had about Greedfall held true: Its systems and narrative are not overly concerned with understanding the complexities of its various institutions or the implications of its setting. Time and time again, De Sardet’s optimal path is one where all parties are placated. The emphasis on pleasing every faction lasts throughout, and far from being a Tyranny-esque commentary on the difficulty of facilitating change, this choice mostly feels like a lack of imagination. After the point where a singular villain reveals themselves, it becomes very clear that the “best” path through the game is one where you have made everyone happy, called everyone to aid you, and defeated the bad guys. History is a story of great men, and all you need to unravel the worst tangles is one good soul with high enough faction reputation score. In the end, Greedfall has very little to say about greed other than it exists and is bad. It has little to say about power other than to suggest it is good when good people possess it and bad when bad people have it.

Greedfall’s rigidity is its single greatest flaw. Glossing over the complications of its setting and limiting player expression ultimately hobbles whatever potential was initially present. It’s glaring, because the games that Greedfall emulates do manage to address their complexities. Fallout New Vegas is a flawed but compelling example of a game about contrasting ideologies of power. Tyranny is deeply concerned with what it means to compromise in a corrupt society. Dragon Age 2, the game that Greedfall resembles the most in structure, uses its fantasy frame to tackle a host of subjects, from institutional violence to colonialism. If these things can be done in the post-apocalypse or magical realms, why can they not be done here? 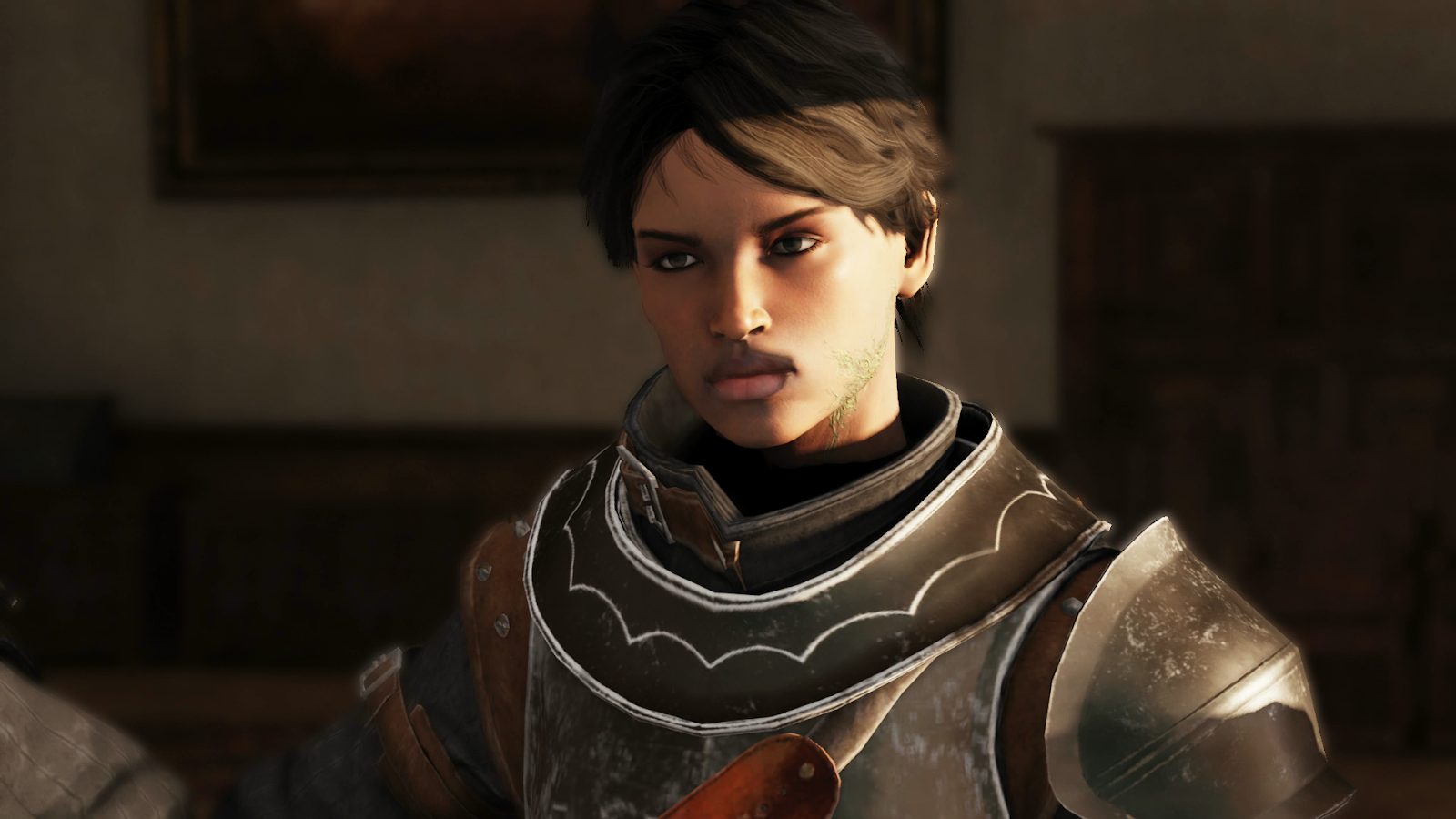 When I first saw Greedfall, I wanted to believe that it could, in spite of a charged setting, explore complex ideas. Instead, it skims the surface all the way up to its weak conclusion. There are superficial flaws I could mention: horrible subtitles, framerate issues, and repetitious barks from companions during combat. There are things to admire: smart systems and snappy combat. Greedfall has its moments, but at the end of the day, it’s hard to see the point. Greedfall’s dedication to half-measures and bare minimums prove impossible to overlook. Not all video games need to be introspective and interrogative, but Greedfall wants to have it all without the work. That ambition leads to a confusing and ultimately disappointing experience.