When you play a video game directed by Kotaro Uchikoshi, you know you’re always going to get a few things. There will be tangents about fascinating pieces of science and mythology. The characters will frequently make terrible lewd jokes. And the story will be a sprawling tapestry full of twists, emotional moments, and ruminations on the meaning of life.

You may know Uchikoshi best from his Zero Escape trilogy, which became a cult classic starting with the fantastic Nine Hours, Nine Persons, Nine Doors in 2009 and ending with the more polarising Zero Time Dilemma in 2016. His newest game, the unfortunately titled AI: The Somnium Files, is out Tuesday for PS4, PC, and Switch. I’ve played a bunch of it. It’s enthralling, twisty, and just as weird as you’d expect from the guy who brought you Bomb Sudoku.

Like Uchikoshi’s previous games, AI: The Somnium Files is a visual novel with multiple branching paths. You play as Date, a detective whose left eye has been replaced by an AI named Aiba that serves as both a talkative partner and a useful multitool. (She can give you advice, use X-ray vision, and even hack computers.) Date is called to investigate a murder on a carousel, and soon enough he’s entangled in a far bigger story involving cults, eye gouging, and a perky, mysterious video game streamer named Iris. There are questions. So many questions. Why has Date forgotten everything before the last six years of his life? What’s the deal with Iris feeling cold all the time? Why is everyone such a pervert?

Outside of cutscenes, the game unfolds in two main phases. There’s investigation mode, in which you move from place to place, poking at objects and interrogating characters. Pretty straightforward visual novel stuff. Things change a bit more drastically during certain points in the game, when Date uses a special machine to enter people’s minds and access their “somnium,” a dream-like manifestation of thoughts and memories, sort of like a palace in Persona 5. The goal is to hunt for clues in a person’s mind to find the truth that they won’t tell you.

The way this works is a little odd. Each somnium sequence puts you in a dream world and gives you a time limit – usually six minutes, although that’s not in real time; it’s more like a currency that you’ll use for actions within the dream – as well as a handful of obstacles. To get past these obstacles, you have to go up to whatever objects you can find and interact with them in one of a handful of ways. For example, during one somnium, you’ll have to help a woman escape from a man chasing her through a warehouse. To do this, you’ll need to find a door from one side of the warehouse to another, then hunt down a control panel for a crane that you can use to move some boxes around. Each action takes up a certain amount of time (some might be 10 seconds, others over a minute), and you’ll find that many of the options do nothing. Too many false moves may lead you to run out of time, forcing you to start over. These sequences can feel a bit tedious – it often feels like you’re just guessing what to do next – but fortunately, they don’t last too long.

It’s the end of each somnium sequence that gets really interesting. Many of them end by giving you two options, each of which will send you down a different narrative path. In the menu you’ll find a flowchart of these paths that will look familiar to anyone who’s played the Zero Escape games: 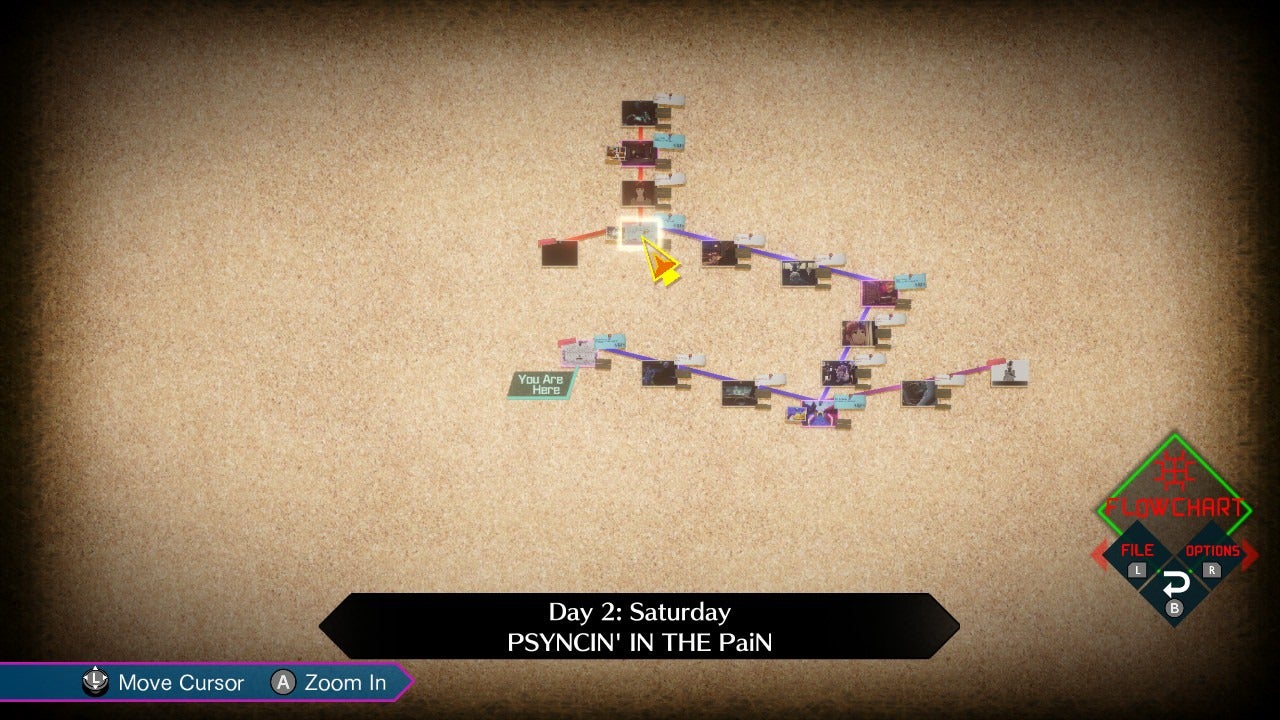 Needless to say, the story is just as elaborate and twisty as Uchikoshi’s other work. You can jump around to any of these scenes, and as you can see on my flowchart, I’ve already hit at least one locked portion – the rightmost card – that I’ll need to revisit later once I’ve seen more of the story, just like in Virtue’s Last Reward.

I’ve played a bit more than eight hours of AI: The Somnium Files, enough to make a dent in the game but not enough to unravel its mysteries just yet. So far, I’m completely captivated. It doesn’t run particularly well in Switch portable mode, with frequent stuttering and random load pauses, but I’m hooked enough by the story to get over that. Even if there are a few too many bad sex jokes.