Shadowbringers, the latest expansion to Final Fantasy XIV, released two months ago, and I cannot begin to fathom the amount of time I have spent in the worlds of Eorzea and Norvrandt. Shadowbringers is one of Final Fantasy’s finest stories, buoyed by powerful music and sweeping gameplay changes that make job classes sleek and enjoyable. If you’re going to expand a massive role-playing game, this is how you do it.

Final Fantasy XIV is a slow burn, having had one of the strangest redemption arcs in recent memory. Initially released in 2010, it was met with disastrous response as clumsy and slow systems failed to grab player attention. It was a ponderous beast in the vein of its predecessor Final Fantasy XI, which released eight years prior into a very different ecosystem. After World of Warcraft’s release in 2004, the pace of online role-playing games moved to something faster. Final Fantasy XIV couldn’t keep up and so, under the direction of former Dragon Quest team member Naoki Yoshida, Final Fantasy XIV was rebranded into Final Fantasy XIV: A Realm Reborn. Even that took time to find itself, slowly establishing an identity through its first two expansions, Heavensward and Stormblood. With the release of Shadowbringers, that growth is arguably complete. This is one of the most well-made, confident, and enjoyable Final Fantasy experiences that can be had today.

BACK OF THE BOX QUOTE: "One brings shadow, one brings light..."

LIKED: Fabulous story and characters, gorgeous world to explore. New classes are a lot of fun!

Shadowbringers takes players away from the world they’ve previously known, Eorzea. The player character is pulled into a parallel world called Norvrandt. Also called the First, Norvrandt is one of the many “reflections” of Eorzea. It takes familiar features and remixes them into a more mystical and fantastic form. Ravaged by a cataclysmic “Flood of Light” nearly a century ago, it is a world of perpetual day where creatures called Sin Eaters wander the land to feast upon the populace. The player is drawn to this world by a mysterious ally in order to slay the Sin Eaters and, in solving the plight of Norvrandt, prevent a cosmological catastrophe that threatens the multiverse. Doing so sends them on a quest to reassemble their scattered allies and face powerful beings called Lightwardens. All the while, a scheming villain accompanies them, providing insight into a grand and tragic history, the revelation of which shatters all previous beliefs about how the world of Final Fantasy XIV worked.

Thanks to the supervision and writing of scenario lead Natsuko Ishikawa, Shadowbringers is one of the most enthralling Final Fantasy stories written. Within its sweeping framework, Shadowbringers manages to tackle themes of parenthood, death, apocalypse, and more. Shadowbringers is a concept of a world after the end. Scattered pockets of civilisation fight to restore life to normal. Meanwhile, the decadent city of Eulmore employs a caste system that rigidly holds on to wealth and plutocracy. It is a nation of hoarders locked behind guarded walls, led by a petulant child of a man. And while Shadowbringers stumbles with Eulmore, veering into unflattering commentaries about fat bodies as an all-too-reductive shorthand for greed, its baseline critique remains evocative. Even after the end, the wealthy will seek to continue their comfort. Or consider the late-game revelation of a time before known history where a utopian republic of mages once ruled, crafting marvels with a powerful creation magic until the day that a strange natural force warped their creative impulses into an uncontrollable deluge of beasts and fire. In these moments, Shadowbringers’ story rises to capture very real and powerful sentiments. 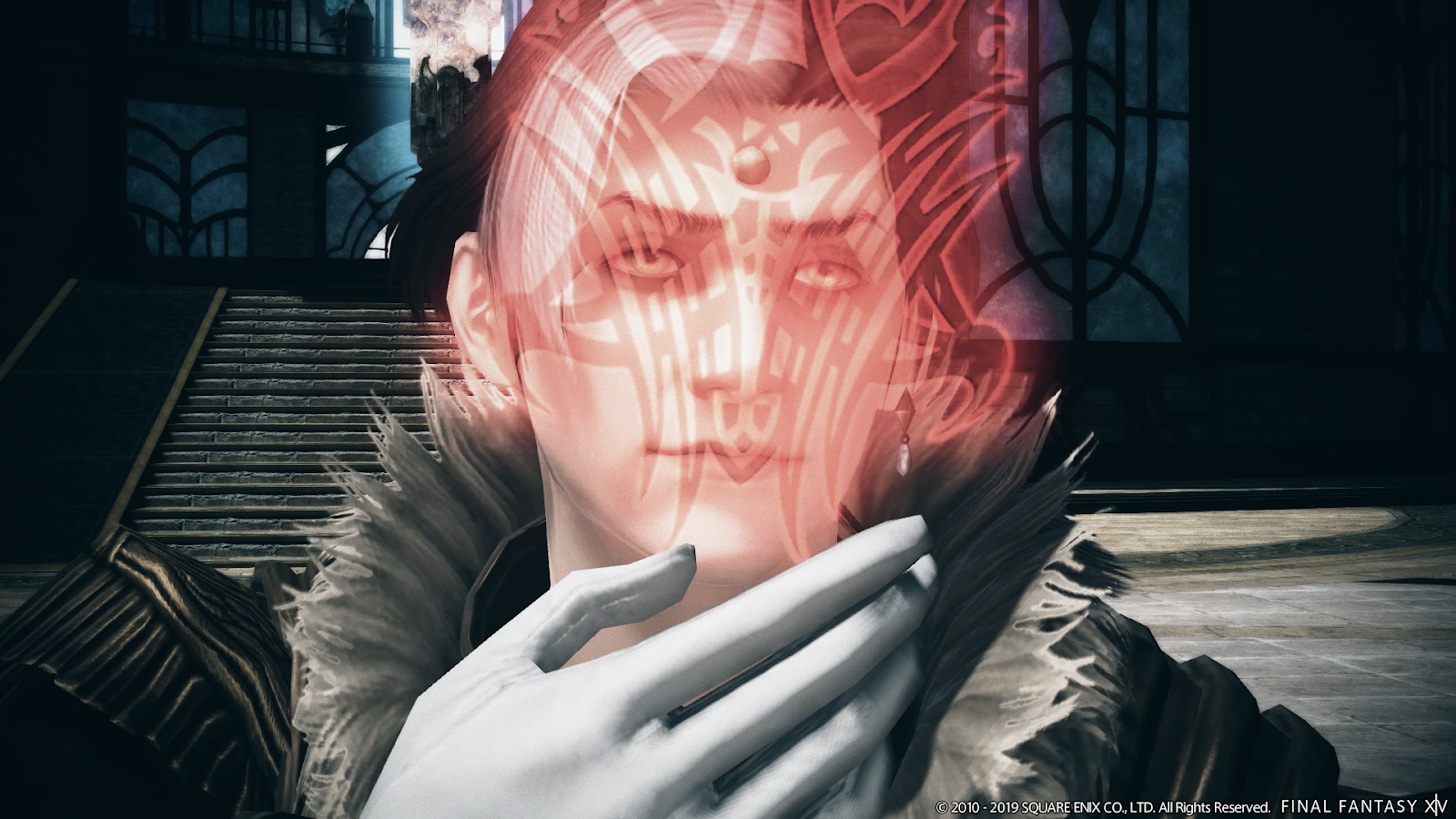 From time to time, Shadowbringers’ story loses track of itself. For example, wading through the dull relationships of a mining town or spending multiple hours constructing a massive golem were painful. This padding is the narrative’s one significant flaw. The story takes place over the course of the 70-80 level range and offers a variety of dungeons and boss fights. These high-quality challenges help offset the moments where the narrative comes to a screeching halt, making it far easier to push through to the game’s spectacular finale. In those final moments, I watched strangers pause in the middle of awe-inspiring dungeons and felt my heart race as we faced the final boss before anyone knew what the fight mechanics were.

The expansion brings new systems and job classes that enrich the experience. Chief among these is the Trust System, which allows players to enter story dungeons alongside computer-controlled companions instead of other players. Your companions have unique dialogue and behaviours that bring charm to encounters, and their availability throughout the main campaign means that even solo players are able to engage with content more easily. The system falls apart in the post-game, resetting your companions’ levels and forcing you to grind out dungeons in order to power them up, but for the duration of the main story, it does exactly what it sets out to do. 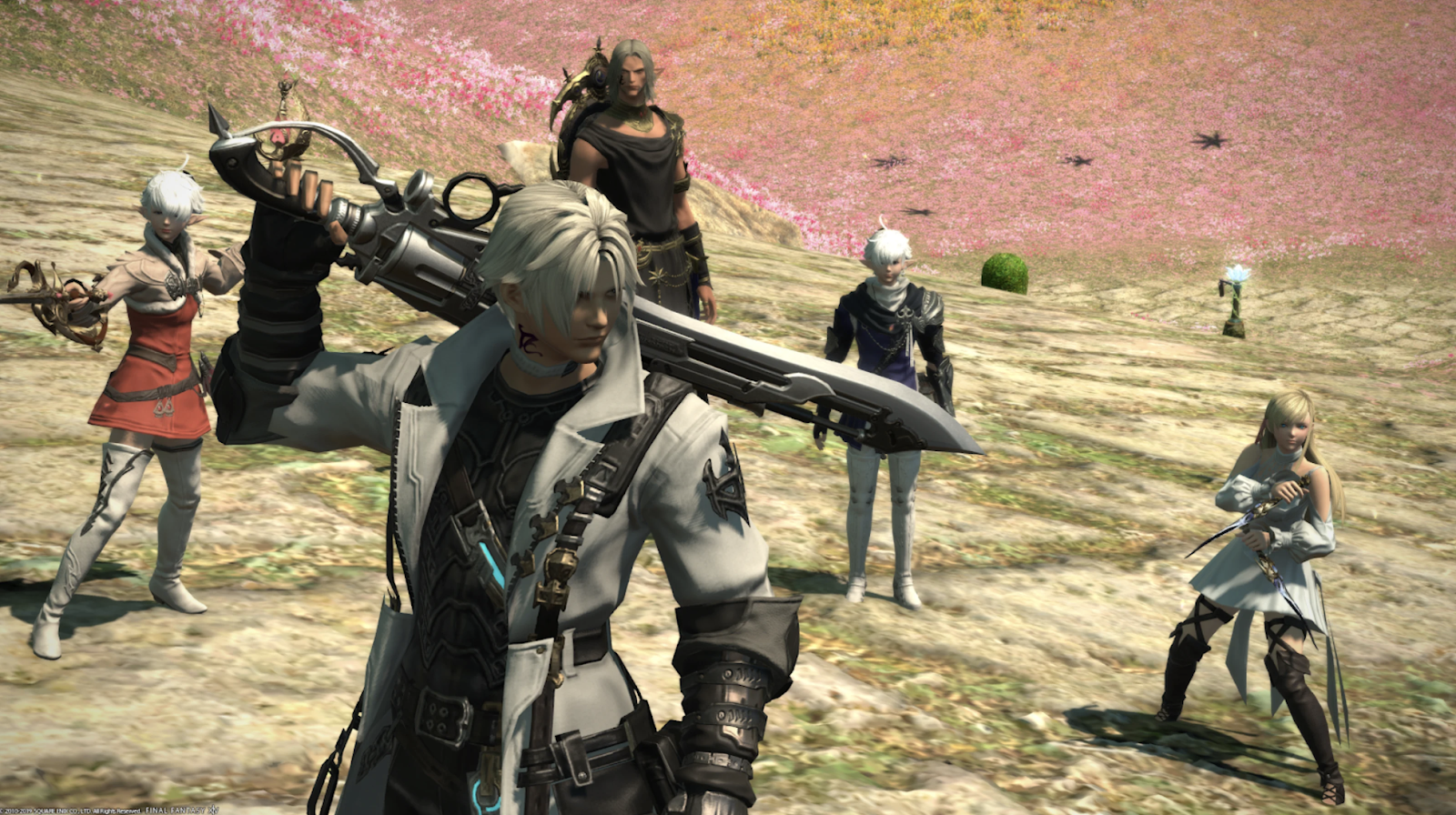 The Trust System comes alongside sweeping changes to job classes that removed skills and reworked how many classes function for simplicity’s sake. The overly complex Summoner class, whose attack “rotation” took minutes to summon their most powerful minions, can bring out the big guns faster and now summon a powerful Phoenix to light foes ablaze. The White Mage, whose unique “lilly gauge” previously did little more than allow them to cast spells faster, can now be used for powerful healing and attack spells. As a result, many classes are more enjoyable to play and easier for new players to learn.

It’s not all good news, though. In removing complexity, there’s been some loss of job identity. In particular, tank classes – defensive roles focused on absorbing damage from enemies – lack some of what made each unique. The Astrologian class, whose magical cards once gave a variety of effects, now use them exclusively to increase their team’s attack power. Shadowbringers’ changes have made things easier to understand and play, but not without some sacrifices.

Breathing additional life into the play experience are the expansion’s two exclusive job classes: the Dancer and the Gunbreaker. Dancers are damage dealers who can also buff their allies with a variety of defence- and attack-boosting spells. It is a complicated class whose nuances take some time to master. Attacks trigger random “procs” that allow Dancers to execute attack combos. These combos, in turn, have a chance to grant a resource that can be spent on additional attacks. All the while, it is possible to dance and trigger a sort of rhythm game where hitting the right buttons increases the potency of your buffs. The Dancer brings a welcome complexity to Final Fantasy XIV, even if it sometimes feels at odds with Shadowbringers’ beginner-friendly mindset. It is dynamic, asking players to pay close attention, but its randomness holds it back from time to time. 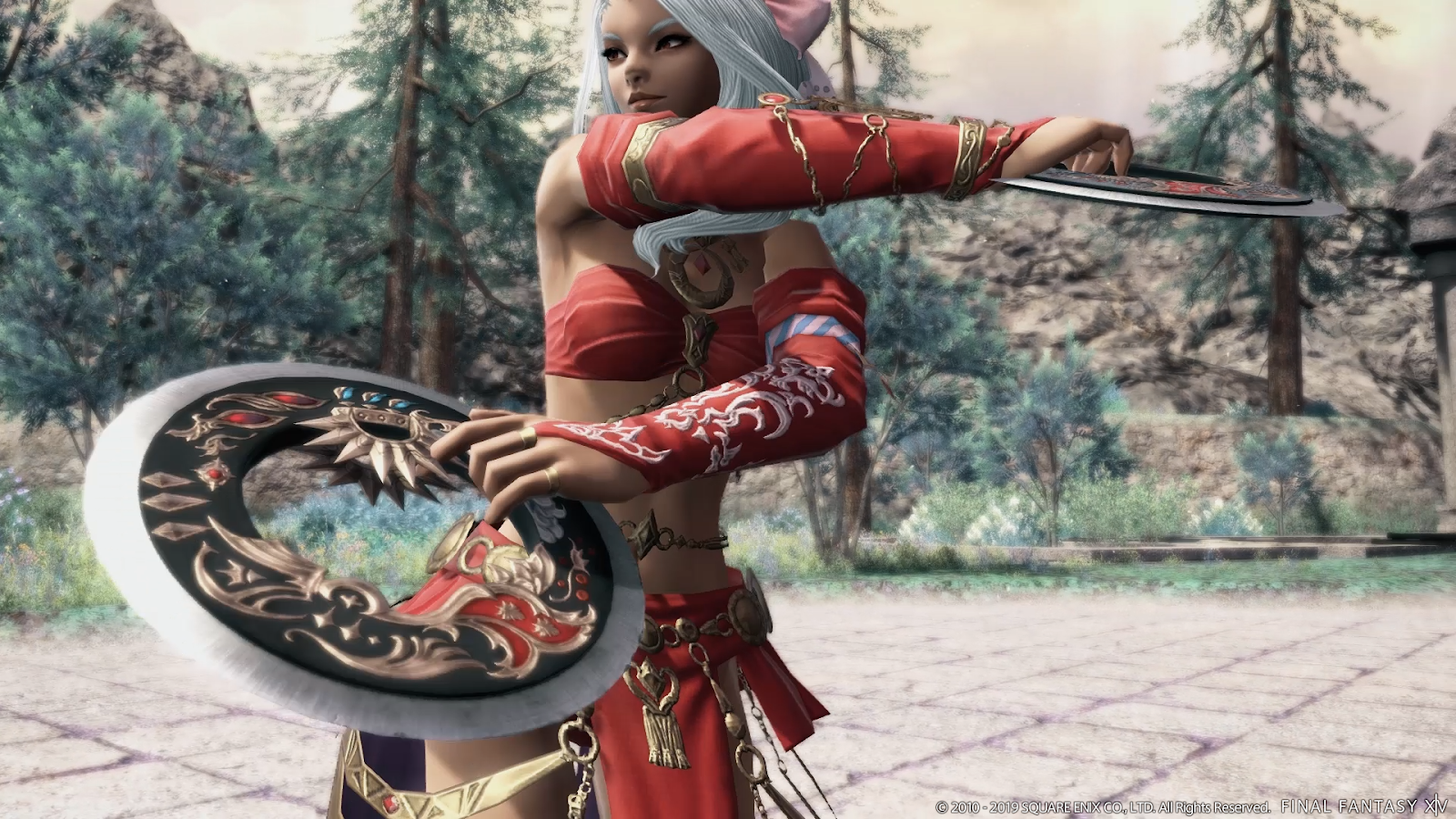 Gunbreakers are a tank class. Wielding iconic gunblades, they have a furious playstyle that revolves around lengthy combo sequences. At lower levels, Gunbreakers feel woefully inadequate. They do not have the powerful healing spells of their Paladin peers or the exciting defensive mechanics of gritty Dark Knight comrades in arms. As they level, gaining access to more attacks, the class start to find itself. Playing as a Gunbreaker is a fun and aggressive process at later on, but the aggression comes at a cost. This class cannot hold ground for too long, relying on healers. In spite of this, Gunbreaker is consistently exciting to play. Like Dancer, its flaws add more charm than difficulty.

Shadowbringers’ endgame content is limited at the moment, but what exists ranks among some of the most interesting encounters you can have. The expansion introduces the Eden raid tier. With four fights currently available, a team of eight players can face off against tough enemies for the highest-quality loot. The monsters are designed by Final Fantasy veteran Tetsuya Nomura, taking inspiration from Final Fantasy VIII’s various summons while also offering hardcore remixes of old Final Fantasy XIV bosses. The Eden raid fights have a playful sense of difficulty, enough to challenge skilled players and dazzle with spellbinding attacks. In addition to these raids, the dubiously named “savage” variants of story bosses bring never-before-seen mechanics and culminate in a terrific challenge that only the most organised groups will pass. Their lustre has worn as the weeks have passed, but Eden started strong and will continue to grow with new fights. A larger, 24-player series of raids influenced by Nier: Automata and created in cooperation with director Yoko Taro will be arriving within the next month.

Under all of this – the story, the revamped gameplay, the difficult endgame challenges – is Shadowbringers’ secret weapon: its music. Composer Masayoshi Soken’s pieces have always run the gamut from traditional fantasy marches to intense industrial rock. Grand battles against ice gods started with powerful piano laments before breaking into pop rock. Muted battle marches exploded into operatic triumph. Shadowbringers continues this tradition but ups the ante considerably. Soken’s score is a lightning strike, bold and beautiful throughout. Releasing yesterday on iTunes, the soundtrack surpassed artists like Lana Del Rey on the popularity charts. There’s good reason for this; Soken has come into his own to stand proudly besides series composers like Nobuo Uematsu and Masashi Hamauzu. Shadowbringers’ highest highs and dramatic lows would not be the same without Soken’s powerful scores.

Shadowbringers is a fantastic experience by any metric. That it triumphs within the complicated frame of an online RPG feels almost miraculous. I spent weeks of my life immersed in Eorzea before Shadowbringers and gladly continued after its launch. I have made fantastic friends and formed connections with some of the most important people I’ve known. I’ve embarked on countless adventures, learned the intricacies of numerous jobs. I found a community, a world of vibrancy that brought renewed colour to my life. Shadowbringers’ story is triumphant, the artistry inspiring. There are rough patches – pacing woes and overzealous changes to beloved jobs – but Shadowbringers rises above those stumblings. It cements Final Fantasy XIV’s place within the series alongside cherished titles like Final Fantasy VII, and it marks the absolute redemption of an initially troubled game.