During a PAX-adjacent Microsoft event in Seattle last week, I’d just finished playing the demo of Backbone, a noir detective game starring a raccoon in a rainy, animal-run Vancouver. I was fascinated by the setting, the themes, and the dialogue. Recorder on, I approached narrative designer and studio co-founder Alex Korabelnikova. “The game came about when one of our devs was attacked by raccoons,” she said without a hint of irony in her voice. It was at that point that all my other questions went out the window.

I did a double-take and implored her to explain further. Korabelnikova told me that Nikita Danshin, studio EggNut’s co-founder, developer, and composer, had to fend off some raccoons during a call with the rest of the development team.

“We were making a different game,” Korabelnikova said. “It was sci-fi. It had a smell mechanic where you could stealth by using your sense of smell and other senses. During the call, raccoons attacked, and we couldn’t stop thinking about it. We couldn’t stop talking about being a raccoon thief, and then the raccoon thief turned into a raccoon detective. That’s how the game was born.”

The smell mechanic, incidentally, is in Backbone, though it wasn’t present in the demo I played. It’ll allow you to sniff items and follow their trails or badger characters (who may or may not be actual badgers) in dialogue with evidence that only your nose knows.

But that’s not all the raccoons inspired. Backbone features a slick, jazz-infused soundtrack. You might think that’s par for the course when it comes to rain-spattered noir settings, but the soundtrack was also inspired by how Danshin, a musician, scared the raccoons away.

“The raccoon attack was really bad,” Korabelnikova said. “[Danshin] had to scare them off with a trumpet, and that’s how the soundtrack was born.”

Flabbergasted, I asked her if this actually happened, or if she was just doing a bit. She assured me it was all real—that she had witnessed it as part of the call. “I couldn’t come up with this, to be honest,” she said.

After PAX, I reached out to Danshin, who gave his version of events.

“I couldn’t come up with this, to be honest.”

“Our small team of three at the time was sitting on a group call, chatting about the story and lore of the world [for the sci-fi game],” he said in an email. “I used to live on the ground floor of an apartment building and saw everything that was happening in my backyard through a glass door, so I noticed out of the corner of my eye that there was something happening with my compost bin. I asked the peeps to wait on the call and noticed my neighbours who already visited me once: a family of raccoons, about 5-6. There was a moment of hesitation about what to do with the guests, but a friend of mine left a trumpet in our house as I wanted to learn the instrument, so after a quick word with the team we decided to toot them away. I quickly opened the door and started making all sorts of weird sounds, which made them skedaddle pretty fast, climbing a tree and watch me with their neon headlight eyes.”

The raccoons weren’t after Danshin; they just wanted a few sweet morsels of his garbage. Originally, the incident inspired the team to make a game about something near and dear to all of our hearts: trash.

“After that, I came back to the team and they suggested that making a game about raccoons fighting for control over the city trash would be a fun idea,” Danshin said. “After a long brainstorming session, we turned them from animalistic to anthropomorphic, expanded their society to more creatures, and decided to only have a raccoon as a main character. We made that all for laughs, gave him a detective look, and suddenly it all came together. This became our setting where we actually can tell a great story, to inspire people, so we decided to give it a more serious and dark feel, slowly opening our minds and putting in ideas and experiences from the real world.” 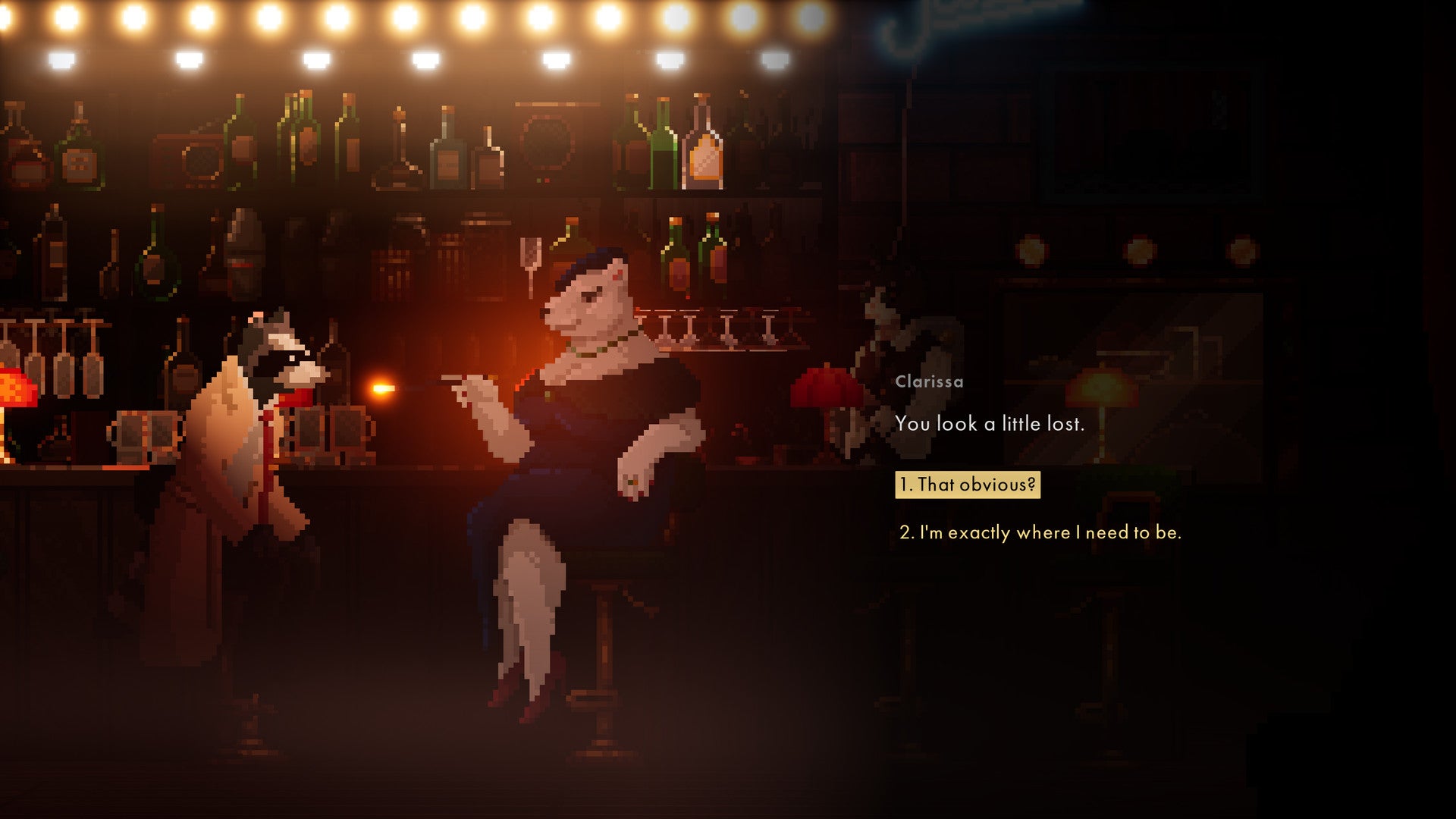 It does, so far, seem like a pretty interesting story. In the demo I played, I – as Howard, the raccoon detective – began by taking an odd job to track somebody down. Of course, I quickly got in over my head. The 30-or-so-minute snippet contained multitudes: voluminous dialogue trees that Korabelnikova said were inspired by RPGs like Planescape Torment, multiple routes into a pivotal location that allowed for dialogue (which you can fail miserably at and still progress) and stealth, and allusions to the setting’s real world underpinnings, with characters briefly mentioning the authoritative regime running the city and the systemic inequality undergirding it all. By the end, I’d discovered a dead body in an exceptionally spooky basement, and I had a heck of a case on my hands. The whole thing bordered on noir pastiche, but with just enough panache and clever ideas to keep me interested. I’m very excited to see where the full game goes when it comes out next year.

As for the real-life raccoons that inspired it all, they stopped visiting Danshin’s apartment in full family formation, but for a little while, the bravest among them would still venture back “from time to time,” Danshin wrote. That day, meanwhile, actually provided Danshin with multiple valuable takeaways.

“Since then, the trumpet is my first solution to unwanted guests.”