Welcome, everyone, to my strange little wheelhouse, where one of my biggest passions in life (video games) is currently intersecting with a smaller one, collecting sports jerseys.

The news I’m pinning this on: On Sunday, Nike announced that it had signed a deal to make every single team’s competitive outfits for the next League of Legends Pro League season in China. Esports is obviously big money in China, and sportswear brands like Nike and Adidas (who recently signed Ninja as a brand ambassador) are increasingly interested in tapping into the field, which they see as an intersection between two markets they already dominate: sports and youth culture (however you choose to define that hazy term, whether it be skateboarding, rap, etc).

So it’s a natural fit, if you work for Nike or the pro LoL community. Nike plants a big ol’ flag in the pro League of Legends scene, and everyone involved with the game gets to trade off the legitimacy and professionalism afforded by dealing with an actual sportswear giant, rather than some tacky upstart esports clothing brand.

Here’s an overview of each team’s shirt: 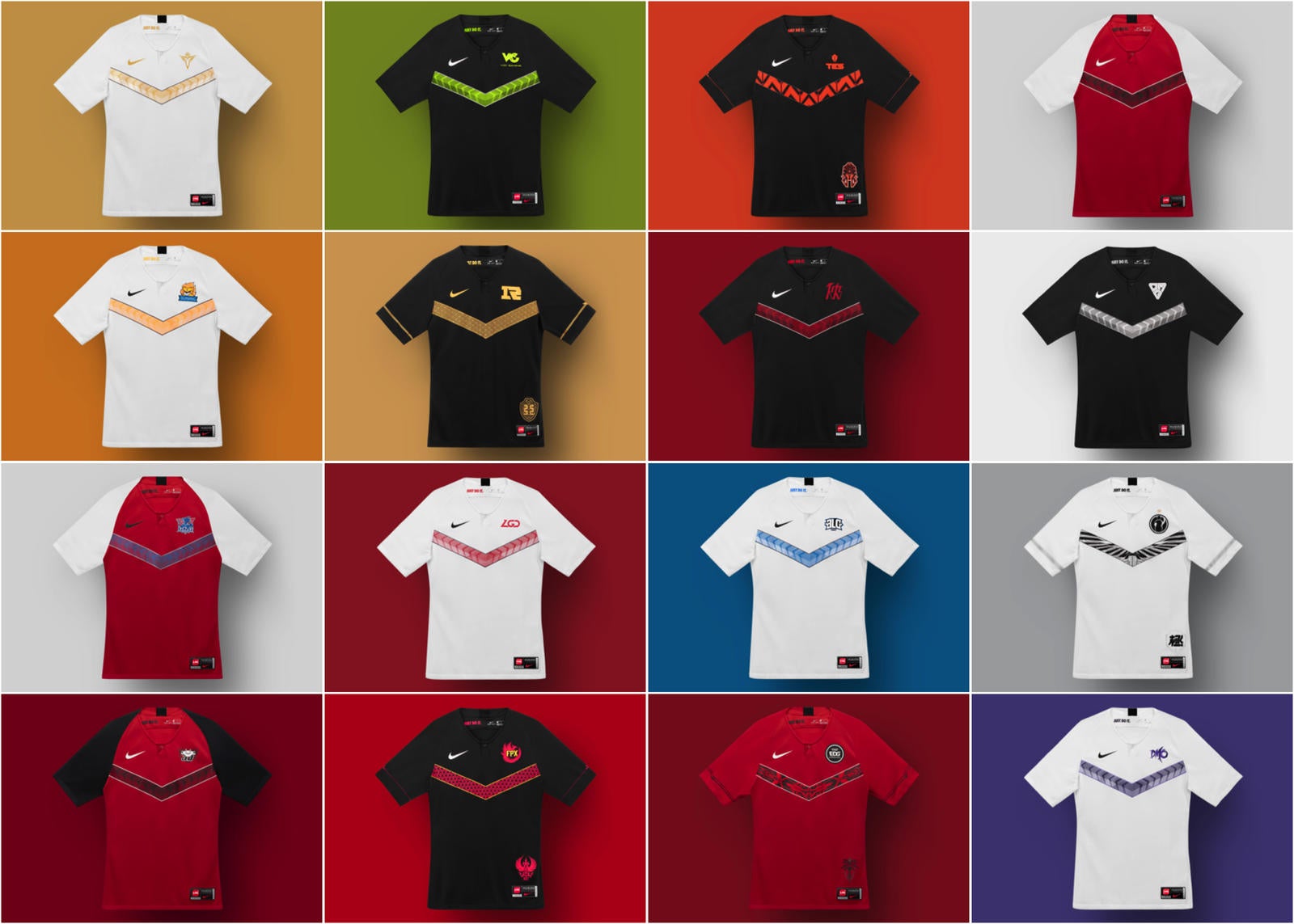 Nike’s press release hilariously says the “common chevron pattern on the chest” is there “to symbolise motion and teamwork.”

For starters, and most obviously, they’re all the same shirt! Despite claims in the press release that each jersey will feature “bespoke designs unique to the gaming communities”, that’s limited to a few teams switching up the patterns inside the common chevron and a handful of logos printed on the collars. Otherwise it’s just one big ctrl+c, ctrl+v job across 16 teams. 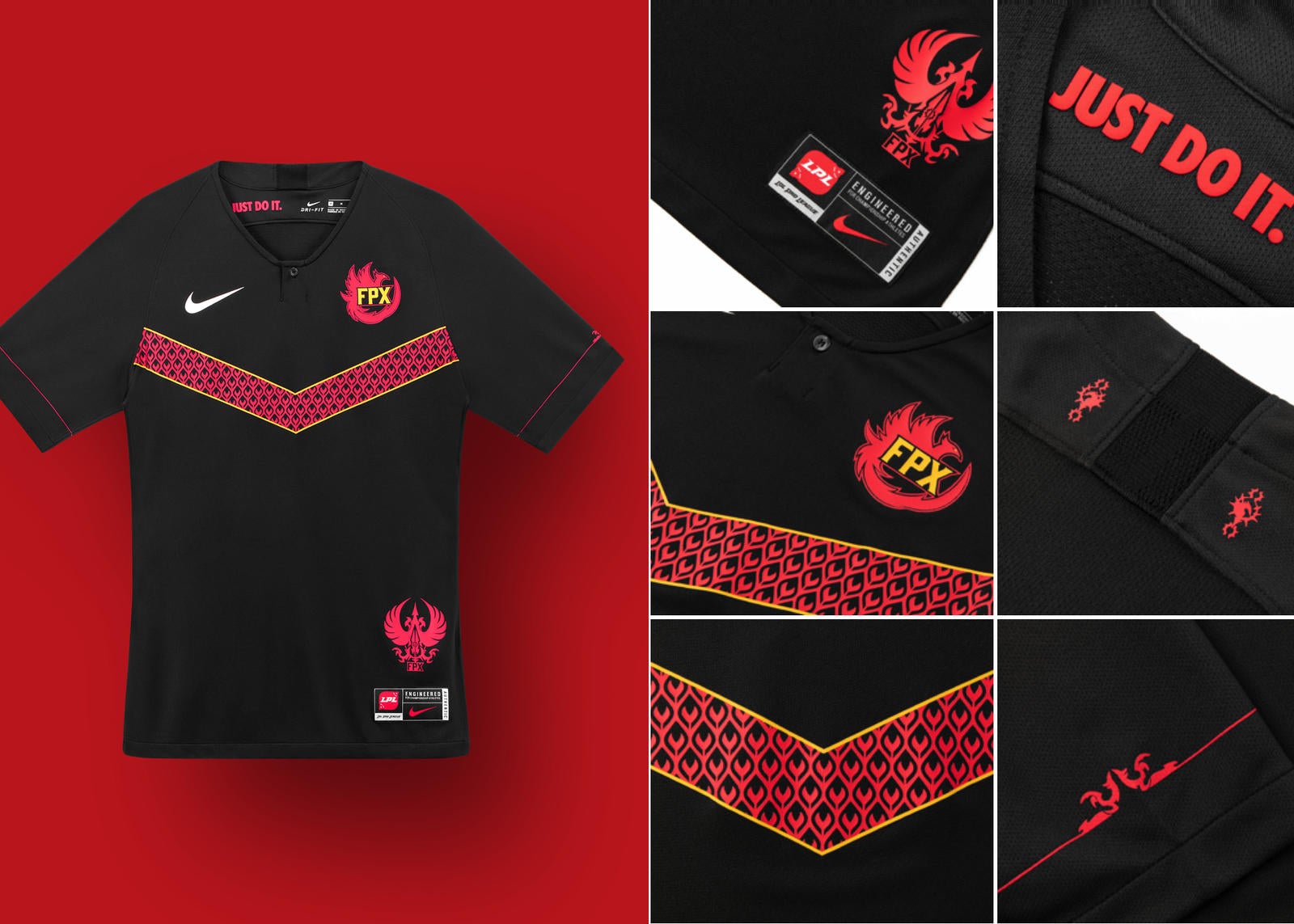 In sports uniforms terms – and especially in football, which is where this particular shirt design (a variation of the 2018 Aeroswift, worn by teams like France at the World Cup) comes from – that’s borderline disrespectful. “Template” jerseys, as they’re called, are a source of mockery from some fans, who rightly see it as a lazy and unimaginative cash-in. As a result Nike does all it can to avoid this in football these days, especially with more prestigious clubs, by swapping collar and sleeve designs across different jerseys to at least create the illusion that your favourite team is worth its own unique, custom shirt.

So the message being sent here by Nike is basically yeah, we can see there’s money in League of Legends, but we’re going to put in the absolute bare minimum of effort, because that’s all we think it’s worth. Not only is every shirt sharing the same template in order to save on production costs, but it’s an old template at that.

On the brighter side, alongside the official team gear Nike is also releasing a “Nike x LPL apparel collection”, which is a bunch of clothing for fans like hoodies and t-shirts. Here, instead of trying to take a page out of sportswear’s books (an idea I’ve always thought was dumb for esports, since they need to be forging their own path), Nike has just shot straight at the target demographic, and the results are a lot nicer.

As lazy as this first batch of jerseys is, it’s only the first year’s effort in a four year deal Nike signed back in February. Hopefully they can get a little bolder with next year’s shirts.